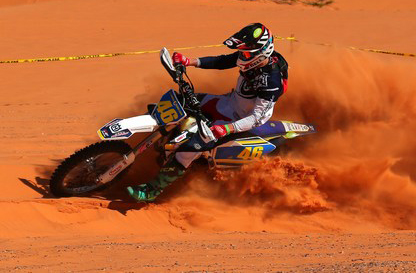 The sand was flying all weekend at Sand Hollow, which made for a very technical track with square edges and peaked dunes, and the sand was constantly changing, which kept the racers on edge over the nine mile long race course.

Dalton Shirey was able to rail the outside of the first turn to edge out Sutherlin for the holeshot, but dropped back behind Sutherlin early in the first lap, which allowed him to learn some good lines from Sutherlin out front.  Sutherlin bobbled going through the scoring chute at the end of the lap, giving Shirey the space he needed to take the lead and the victory, his first ever in WORCS competition. The win moves him to second in the title chase, just 21 points behind Bell.

Gary Sutherlin’s second WORCS race back from an injury was a good one as he held the early lead and finished in second behind Shirey to make his 2016 WORCS podium debut.

Robby Bell had several offs during the event and was happy just to finish. He held onto his lead in the points with his fourth podium finish of the season. “I was definitely a little tentative in the sand, and I did it the hard way,” said Bell. “I got a bad start, so by the time I got to third, those guys were gone. I tried to switch up some lines in the rocks and I had two falls. Eric caught up to me and we had a heck of a battle into the finish. Dalton and Gary were just on another level today.”

Eric Yorba was penalized for speeding in the pits, which dropped him back to a fifth place finish behind Colton Udall in fourth.

In Pro 2, Travis Damon ran away with the race after quickly charging his way into the lead in the first lap, and once out front, he quickly pulled away from the pack by scoring the fastest laptime in the class the following lap.  Zane Roberts claimed the second spot followed by Alex Dorsey on the Pro 2 Podium.

Damon’s second win of the season moves him to second in points just two back from Logan Chambers, who finished in fourth place. “I got off to a rough start, but by the time I got to the top of the big hill, I was in the lead, and I kept going,” said Damon. “I pulled a pretty good gap, and did what I do. I just tried to run a smooth race and not fall. This is my favorite round, so it’s nice to be on top.”

Second place finisher, Roberts battled with eventual Pro 2 Lites winner Dante Oliveira. He had fun earning his first podium of the season. “I knew I had to stick with him to stay up front,” said Roberts. “So I just stayed with him and we had a super fun battle. I had been struggling a lot with arm pump, and this was the first race where that wasn’t an issue. “

“I got the holeshot, kept it out front and tried to keep it off the ground,” said Oliveira. “The sand is different, but I had a lot of fun.”

The next round of racing is for the Rocky Mountain MC World Off-Road Championship Series presented by Maxxis and Dirt Bike has recently been moved to Mesquite, NV on May 6-8th, so b