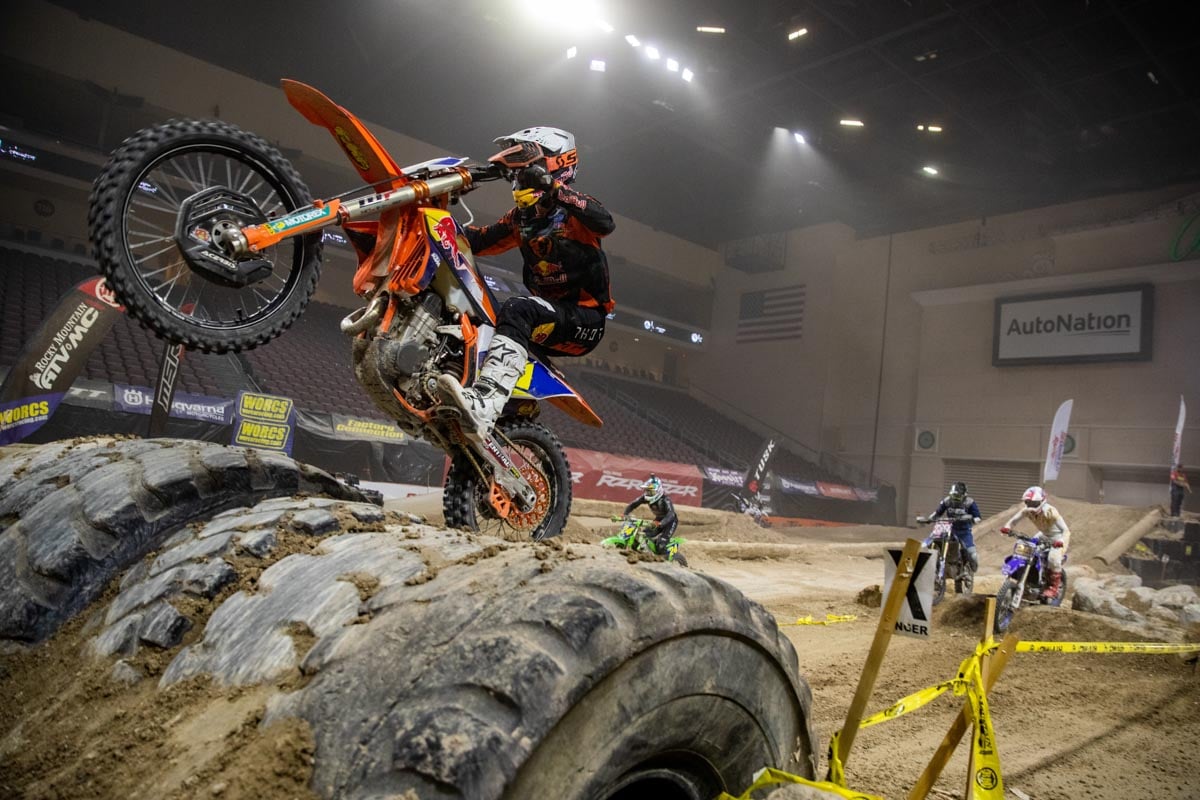 Rocky Mountain WORCS ATV/MC made a return to the Orleans Arena in Las Vegas, Nevada. This race presented a dramatic departure from the usual WORCS. Rather than a 2-hour Pro race, the Orleans offered a 45-minute sprint. Lap times in the pro class, landed around the 1:45 mark.

The Oliveira brothers continued their dominance in off-road racing this year, landing on top of their respective 450 and 250 Pro classes. Collier Martinez was the top rider in Pro-Am, and Brandy Richards took the win in Women’s Pro. This track required varied skill sets, with rocks, logs, an arena cross aspect, and an asphalt section outside the stadium.

Saturday had a full day of racing, as the venue was shared by both the motorcycle and ATV/SXS participants. While most sportsman racing was held during the day, the Pros had the opportunity to race under the lights with the Vegas skyline in the distance. The course was comparatively narrow by WORCS standards, leaving little room to pass and making a good start even more crucial. Dante Oliveira put his Factory FMF KTM in front right away. He held his own pace and held off Tyler Lynn from start to finish in Vegas. The schedule had 26 races slated for Saturday competition, and with the Pro motorcycles late in the day. That led to some very challenging conditions. Some of the corners became incredibly slick as water was laid down on the course to keep the dust down in the high winds throughout the day. Lynn put together a solid race to get away from a few of his competitors on board his Precision Concepts Racing Kawasaki. Meanwhile, a third place battle raged between Factory Beta rider Dare Demartile and SLR Honda rider Cole Martinez. On the 6th lap, Martinez made a pass on Demartile to take over the final podium spot, where he would stay until lap 21. Then Martinez would slip up in the pro rock section, allowing Demartile to get back around him into third place. That’s where they finished when the checkered flag flew.

The Pro 250 class had its fair share of drama and battles as Mateo Oliveira attempted to continue his perfect 2022 season in both WORCS and NGPC. Oliveira, who rides for FMF RPM KTM Racing, battled the entire race with SLR Honda rider Jack Simpson. On the last lap, Simpson passed Oliveira for the lead. Unfortunately, he would wind up disqualified, which allowed Oliveira to reclaim the top spot in the class. The fastest lap of the weekend in all the classes went to Mateo Oliveira with a time of 1:44.158. That topped even his brother Dante. Colton Aeck finished second, holding off a late push from Kai Aiello. Starting from deep in the pack, Aiello riding for 3 Bros Kilmartin Racing, finished in third,  just over ten seconds behind Aeck.

In Pro-Am, Collier Martinez took the win under the lights for SLR Honda. This class had the most changes in position as Brandy Richards doubled up her podiums after taking the Women’s Pro earlier in the day. In third place, Cody Walker landed on the stage for the first time after starting all the way back in 13th place and fighting his way into third. The Women’s pro class lined up with the 450A, 250A, and 125A riders in the afternoon, where Brandy Richards put on quite the show. Richards set a blazing pace, not only taking the overall in the race in adjusted time but finishing second physically after starting from the third line. The next WORCS motorcycle race will be held in Cedar City, Utah on May 27.

For full results, go to worcsracing.com.