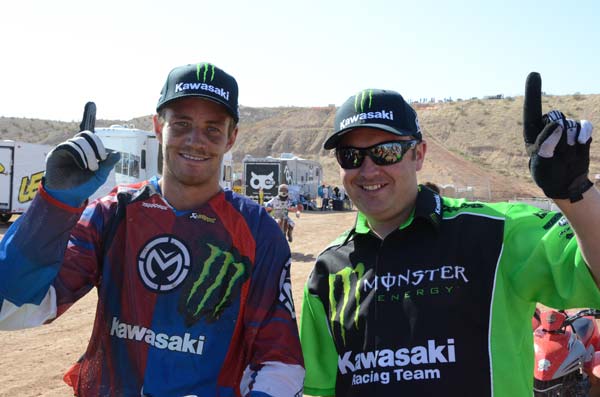 WORCS 3 – It’s all Bobby G
Sand-master Bobby Garrison dominates in Mesquite
By
Joe Colombero
Bobby Garrison justified the faith Monster Energy Kawasaki put into him this year by winning both races in Mesquite Nevada to take the overall victory at WORCS round three. In race #1 on Saturday Garrison took the lead early and held it for the whole 1 ½ hours despite charges by Kyle Summers, Taylor Robert, Mike Brown and Justin Soule. Then in race #2 on Sunday, Garrison gated poorly and had to steadily work his way forward, only moving into the lead a few turns from the finish.
“I was fifth, then fourth, then fifth again then third, and when I got into second but I couldn’t relax because Kyle was right behind me, but I knew I’d get the overall,” said Garrison.  “But then Taylor fell and I had the lead. I only led the last two minutes of the 90 minutes. It’s nice to win again.”

Soule’ got the start, followed by Brownie

Race #2 was a 1 ½ hour battle where the lead changed hands almost every lap. Summers got the holeshot and tried to pull away, but was caught by FMF/KTM’s Mike Brown in the pits. Then Brown crashed and Taylor Robert and Summers went at it with Justin Soule joining in. After an hour, Garrison had moved into the lead group and added to the mayhem. In the end Garrison’s teammate Taylor Robert scored the second place slot with a 3-2 performance just ahead of Kyle Summers with a 2-3 finish. Justin Soule rode hard for fourth place and Mike Brown had an off weekend after hitting the ground a lot to take fifth.

Ivan Ramirez topped the Pro 2 race ahead of defending champ Justin Seeds in second and Husky’s Corey Graffunder in third. Brandon Lieth took another win in Pro 2 Lites ahead of Eric Yorba and Ryan Sandoval.
Robert leads the WORCS Championship after three rounds with 121/1 win tied with Brown with 121/1 win; Garrison is third in points with 119/1 win ahead of Summers with 115 and Soule with 112.