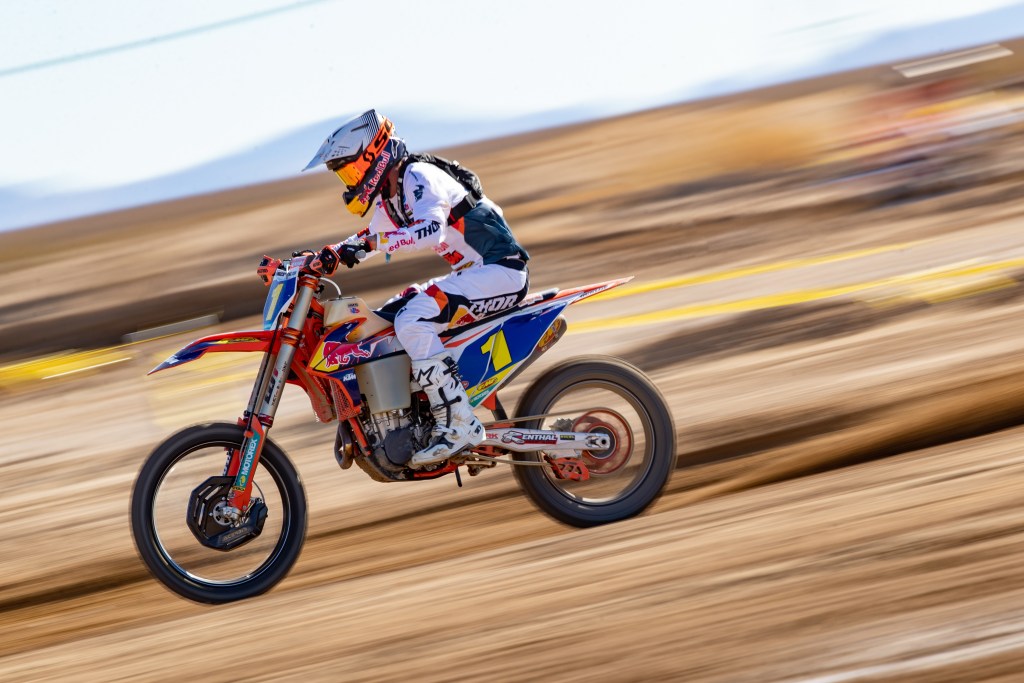 This past weekend the World Offroad Racing Series (WORCS) had their 2022 season opening round in  Nevada. The racing was action packed the entire weekend. New KTM off-road racing team manager Timmy Weigand has got to be happy, his factory supported riders dominated the top step of the professional podiums. Here is the complete race report from round 1 of WORCS done by Connor Moore & Giovanni Vallido .

The Reigning champion heading down the rocks in the early stages of the Pro Battle.

Dante Oliveira, hot off his 2021 Championship at WORCS, was ready to battle and show his fellow competitors he is here to stay. The Red Bull Factory KTM rider was fast off the line pulling a sizable holeshot over a stacked field of other pro riders. “I pulled the holeshot and from there was able to ride my race, the guys behind me had some battles and it allowed me to do my own thing,” said Oliveira.

Dante Oliveira, hot off his 2021 Championship at WORCS, was ready to battle and show the fellow competitors he is here to stay. The Red Bull Factory KTM rider was fast off the line pulling a sizable holeshot over a stacked field of other pro riders. “I pulled the holeshot and from there was able to ride my race, the guys behind me had some battles and it allowed me to do my own thing,” said Oliveira.

Dante Olivera stayed in first the entire race but not without a hard push from Slam Life Racing Honda rider Cole Martinez. The duo of Oliveira and Martinez checked out from their competitors with the two far ahead from the rest of the pack. Martinez slowly reeled in Oliveira leading up to a last-lap battle that kept the crowd on their feet while watching them come into the infield right behind each other, with Martinez just barely unable to get the pass around him. “I really wanted to get the win here in Primm, that would have been three in a row here for me, but it’s cool we have more races to go” said Martinez.  3rd place had some last lap theatrics as well with Austin Walton going down in the pro section and that allowed Trevor Stewart to pass him to on the final lap. Stewart ran a great pace on his new ride with Purvines Racing Yamaha and was able to put it on the podium.

In 250 Pro, the RPM KTM rider Mateo Oliveira took home the win and, just as his brother did, in spectacular fashion. “We both got off to a holeshot and led every lap which I mean is pretty ideal to get it rolling like that,” said Oliveira. Oliveira took off from the start line and put on a blistering pace that kept him far ahead of his competitors. Straight from down under, Jack Simpson, racing for SLR Honda, landed himself in second place after his first Rocky Mountain ATV-MC WORCS pro race. “I struggled to find my lines the first two or three laps but after that, I started to close the gap but just didn’t have enough time. I’m fairly new on this bike and this type of racing so I’m happy to be where I am right now,” said Simpson. Thomas Dunn on the Purvines Racing Team took home third place after a few battles with Simpson. “I got slowed down pretty bad in the rocks and saw that he was pretty far ahead again, so I took my time and played it safe and brought home a third instead of a seventh which is pretty good,” said Dunn.

SLR Honda rider Collier Martinez takes home the win in Pro-AM. Brandy Richards was in the lead after the first lap, but Martinez kept his head down and ended up making the pass to take first and didn’t let it go. Richards, your 2021 Pro-Am champion, held onto second place after a quick fall in the rock section. “I am happy to be able to leave here healthy with a few podiums and ready for the rest of the year.” Third place was held by Drake Hacker who rode a steady race to keep that 3rd here in Primm.

On Saturday, The Women’s pro class was held and Brandy Richards on her Elite Racing KTM took home the win in the first round of Rocky Mountain ATV-MC WORCS Series with Lauren Woods and Mica Diaz joining her on the podium. Richards pulled the holeshot and set sail from there putting a big gap between her and the rest of the field while riding a clean race to prepare her for the Pro Race on Sunday.