Back in the ’90s, Roger DeCoster produced a monthly column in Dirt Bike. This one was from June, 1993, when Roger dealt with the topic of Belgium’s success in GP competition. Today, Belgium is still an international powerhouse in FIM world championship, although France has moved up in the pecking order. Still, Roger’s observations are interesting.

There’s no question that America is in the spotlight of world motocross attention these days. The Motocross des Nations has made that clear over the past 13 years. The only country to even challenge the U.S., year after year, is Belgium.
Why Belgium?
In World-Championship competition, Belgium has won 33 of the 85 possible world titles since the series was formed. That’s about 40%–not bad for a place the size of Maryland with a population of the greater Los Angeles area.
Why Belgium?
In all the world, only four riders have earned five or more World Championships. Joel Robert won six, while Georges Jobe, Eric Geboers and I have earned five apiece. All for Belgium.
Why Belgium? 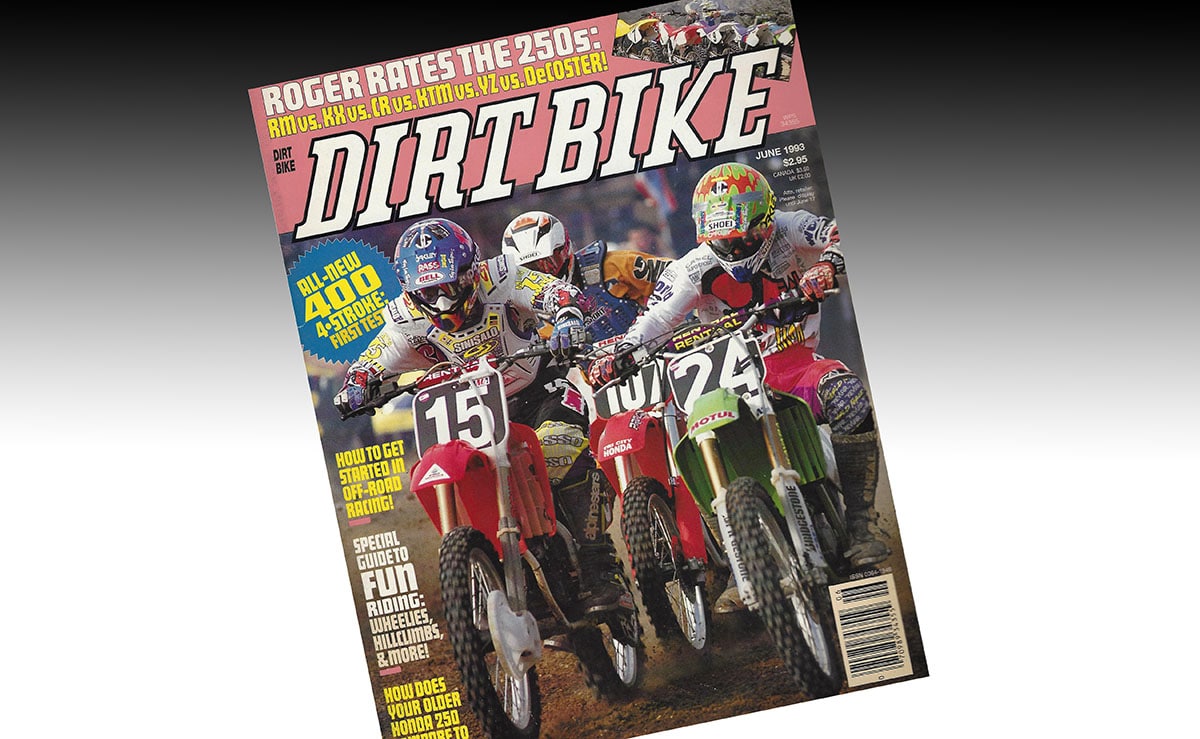 Over the years, many people have asked me how this little country (where I happened to be born) could produce so many champions. I have also discovered that people in the U.S. tend to know very little about my home country. In my racing years, there were many times when I tried to call home from some part of the U.S., and the operator would ask “Belgium? What country is that in?” Some people have even asked what it was like to live in a communist country.
For the record , Belgium is located between France, Germany, the Netherlands and the North Sea, and is governed by a democratic parliament with a figurehead monarch (much like the U.K.). Belgium just happens to produce a lot of motocrossers. Good ones. In the U.S., the same type of phenome­non happened around El Cajon, California. That one city produced Marty Smith, Broc Glover, Rick Johnson, Ron Lechien and Mike Craig. I think this is somewhat natural. When several good riders are grouped together, the riders around them tend to get better. In the case of Belgium, part of it has to be attributed to geographic location. Belgium is centrally located, so it’ s logical for top riders from more distant countries to base themselves there. There has always been an abundance of practice tracks, so through the early ’80s I believe that almost all the major international champions spent some time in the country. On a practice day I could run into Heikki Mikkola, Ake Jonsson, Brad Lackey, Graham Noyce or just about any­one. The Swedes, the Finns, the British, the Americans, they all used to stay in Belgium. Danny LaPorte and Brad Lackey were my neighbors when they earned their world titles. When Donny Schmit won his 125 Championship, he lived near Sylvain Geboers (his team manager). Today, this trend has been reduced somewhat because there is a downward  cycle in the quality and attendance at most local Belgian events, but Belgium continues to produce champions.
The fact that all these top riders lived in a very concentrated area (probably within a 40-mile radius of one another) gave the promoters in Belgium easy access to the top riders, so there were a lot of what we called international events where the competition was tougher even than at a GP. International events were non-point-paying events where, per FIM rules, riders from at least three different countries were present. In  fact, most of the time there were riders from eight countries or more. There were more of these races in Belgium than in any other country, and they took place every weekend when there was a break in the GP schedule. With the best riders from all three classes on the line, the level of racing in Belgium was very high. 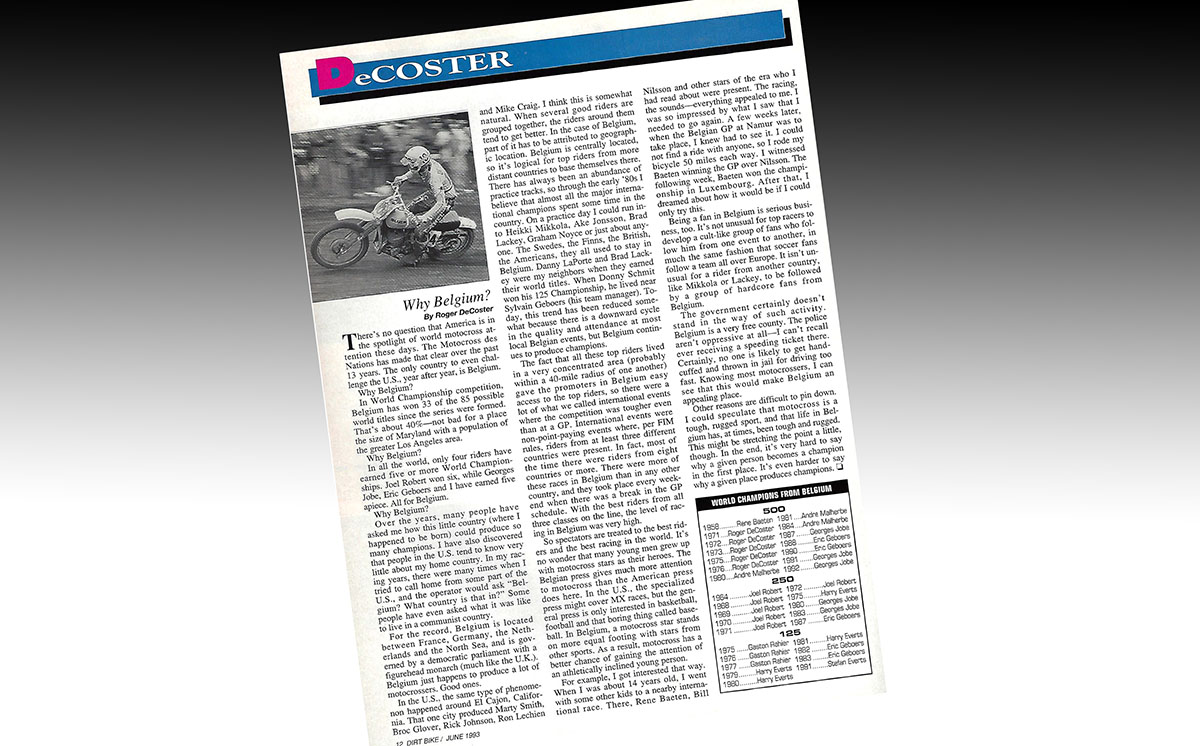 So spectators are treated to the best rid­ers and the best racing in the world. It’s no wonder that many young men grew up with motocross stars as their heroes. The Belgian press gives much more attention to motocross than the American press does here. In the U.S., the specialized press might cover MX races, but the general press is only interested in basketball, football and that boring thing called baseball. In Belgium, a motocross star stands on more equal footing with stars from other sports. As a result, motocross has a better chance of gaining the attention of an athletically inclined young person.
For example,  I got interested that way. When I was about 14 years old, I went with some other kids to a nearby international   race. There, Rene Baeten, Bill Nilsson and other stars of the era who I had read about were present. The racing, the sounds–everything appealed to me. I was so impressed by what I saw that I needed to go again. A few weeks later, when the Belgian GP at Namur was to take place, I knew I had to see it. I could not find a ride with anyone, so I rode my bicycle 50 miles each way. I witnessed Baeten winning the GP over Nilsson. The following week, Baeten won the championship in Luxembourg. After that, I dreamed about how it would be if I could only try this.
Being a fan in Belgium is serious busi­ness, too. It’s not unusual for top racers to develop a cult-like group of fans who follow him from one event to another, in much the same fashion that soccer fans follow a team all over Europe. It isn’t un­usual for a rider from another country, like Mikkola or Lackey, to be followed by a group of hardcore fans from Belgium. The government certainly doesn’t stand in the way of such activity. Belgium is a very free county. The police aren’t oppressive at all–I can’t recall ever receiving a speeding ticket there. Certainly, no one is likely to get handcuffed and thrown in jail for driving too fast. Knowing most motocrossers, I can see that this would make Belgium an appealing place. Other reasons are difficult to pin down. I could speculate that motocross is a tough, rugged sport, and that life in Belgium has, at times, been tough and rugged. This might be stretching the point a little, though. In the end, it’s very hard to say why a given person becomes a champion in the first place. It’s even harder to say why a given place produces champions. 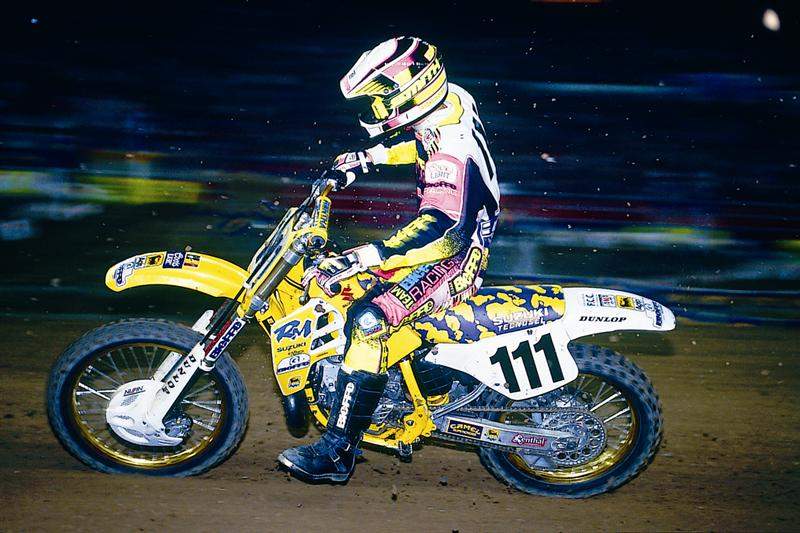