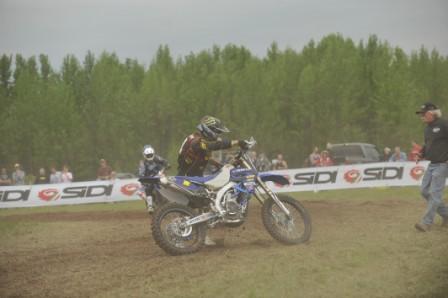 Paul Whibley’s competitors know that their best chance of beating him is to get away from him at the start. So, for the River Front Grand Prix–round three of the Parts Unlimited Off-road Motorcycle and ATV Nationals in , on Easter Sunday–Russell Bobbitt of the FMF/KTM Factory Off-road Racing Team installed a holeshot device on the front end of his 300 XC, finally getting it dialed not long before the start.

It apparently worked, as the enduro specialist rocketed off the line and around the first turn in front to grab the $200 FMF Holeshot Award.         Behind him, step two of the plan to unseat Whibley unfolded when Husaberg’s Nick Fahringer squared off the turn and shot to the inside exiting the turn, his line causing him to inadvertently sweep Whibley’s front wheel and deposit the AmPro/FMF Yamaha star on the ground.          By the time Whibley picked himself up, he was in last place and staring defeat in the face.         But Whibley hasn’t won the last four OMA championships by giving up and he went to work immediately. By the end of the first eight-mile-long lap, he trailed only Bobbitt and Fahringer, and knew that this race would come down to the last half. His patience paid off. Bobbitt reported, “After we pitted–about an hour in or so–I think I got some water in my gas or something because my bike started cutting out.” He double-checked the fuel petcock then tore the vent hose off the tank, but neither action immediately solved the problem.

Well, they did help Whibley, who finally passed the frustrated Bobbitt on the next-to-last lap. But Bobbitt wasn’t through yet. “I made a pass back on him and I kind of gave up one of my good lines, which I should have,” he said.           “Regardless, I got stuck on the last lap when I was right behind him. I had to pull my bike out of the rut and lost probably about a minute or something.”

That spelled the end of Bobbitt’s chance to repeat his triumph at last year’s series opener and Whibley sailed away uncontested the rest of the lap to win his third straight–12 if you count last year’s run.

“It took me a long time to start making any time on Russell,” Whibley conceded. In fact, Whibley didn’t realize he’d passed Bobbitt for the lead until after he went by and looked back: “So the race was on for the last half of the race, probably.

“It was tough. It was probably good for the spectators, but I like it better when I get a holeshot and take off!”

Fahringer ended up a lonely third on his TE 300 while TJ’s Cycles of Austin KTM-mounted Cole Kirkpatrick claimed fourth over local rider Zach Ingram. Shane Klimek put in a good ride for sixth aboard his trusty RM250 followed by Bryan Vaughn, 30-39 A winner Steve Leivan, Matt Barger and Lite A winner Andrew Smith.

Paul Whibley stormed back from a first-turn crash that left him dead last among the Pros to grab the lead near the end of the race, maintaining his perfect OMA record and giving him three out of three. It’s 12 straight if you count last year’s run as well

After inadvertently taking out Whibley’s front wheel in the first turn and scooting away in second behind Bobbitt, Nick Fahringer had a bit of arm pump and spent the rest of the day a fairly solitary third.

After getting the $200 FMF Holeshot Award, Russell Bobbitt enjoyed clear sailing out front for most of the race. Whibley’s job of catching up got easier when Bobbitt’s bike started running a little rough and when the KTM star got stuck in a mud hole on the last lap, that sealed second for him.