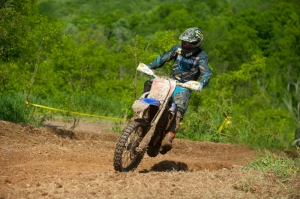 Paul Whibley took the win at the Rock Run GNCC.

Whibley Rocks Rock Run GNCC
Paul Whibley returned to the top of the podium with an
impressive win at the Rock Run GNCC in Patton,
Pennsylvania, the Am Pro Racing/FMF/Yamaha
rider making easy work of the fast and rocky, 14-
mile course to finish nearly two minutes clear of
FMF/Makita Suzuki’s Josh Strang after three
hours of racing.

Strang in the rocks

Whibley took the lead at the start of the race
after passing $250 Motosport.comHoleshot
Award winner Jedidiah Haines in turn three, but
then gave way to Strang and FMF/KTM’s Charlie
Mullins, who took the lead position later in the
lap. Whibley, however, regained the top spot at
the three-mile mark when Strang made a mistake
and Mullins took a bad line in a mud hole and
from there the New Zealander pulled a
considerable gap on the field.
Strang cut into Whibley’s advantage near the halfway
point of the race and took the lead when Whibley
got stuck on a steep climb. However, Whibley took
control again when Strang pitted for gas and from
that point on the Kiwi was never headed.
At the finish, Whibley claimed his second win of the year,
with Strang second and Mullins third.
‘For me, it feels good to get another win,’ said
Whibley. ‘Being one of the older guys in the field
the wins are harder to come by and the last two
races a few of the younger guys have been up
front. So it’s good to still be able to run with
these guys.’
‘I have to admit I wasn’t really enjoying it out
there. I’m not a huge fan of rocks, but this past
week I practiced in the rocks and I was somewhat
prepared,’ added Whibley. ‘The course was quite
fast and the penalty for going down in this stuff
is severe so I was a little cautious out there and I
think Strang might have had problems at the end
of the race so everything ended up going my
way.’

Charlie Mullins rounded out the podium.
Photo By: Shan Moore

Michael Lafferty was a solid fourth.

Indeed, Strang admitted after the race that he
was suffering brake problems during the later
laps, however, his runner-up finish was enough
to elevate the defending champ back into the series
points lead, two points ahead of Mullins.
‘The last two laps the brakes started fading on me,
so it was difficult, but Paul rode a good race and it’s
good to get back in the lead in the standings,’
said Strang. ‘I had the lead and then Whibs got me when I
pitted. After that I struggled with the brakes. But I
felt good and I’m happy with how the bike worked. We
did some testing and we got a good set-up for the rocks
and the suspension worked great in the rocks.’
Strang and Mullins have been battling back and forth
over the series points lead all year, and at this round
Strang seemed to have the upper hand.
‘I would like to think I could have won this if
things had gone different at the start, but that’s
racing,’ said Mullins. ‘But I made a mistake and it
cost me. I took a bad line in the mud and went
from first to about eighth. After that I just did
the best I could to catch up, but it was hard to
pass out there. I got up to third and tried to put
on a charge, but things just weren’t going my
way.’
Michael Lafferty ran as high as second on the
opening lap, and eventually settled into a solid
fourth on his factory Husaberg. The eight-time
National Enduro Champ is making a return to
GNCC racing in a big way this year and looked
comfortable in the rocky terrain.
Kailub Russell finished fifth despite suffering a
severe case of blisters. The FMF/KTM rider had to
pull in at one point and have his mechanic put
duct tape on his hands so he could finish.
Further back, Chris Bach put the factory Beta into
sixth, ahead of WMR Off-road/Clockwork/Planet Fitness
KTM’s Nate Kanney.
New Zealand’s Rory Mead substituted for the injured
Jimmy Jarrett on a JG Off-road/GEICO Powersports
Honda and brought home an eighth place finish in his
first-ever GNCC. Meanwhile, Kenneth Gilbert (KTM)
and factory Husaberg rider Nick Fahringer rounded out the top 10.
After five rounds of the 2011 Can-Am Grand National Cross Series,
Strang holds the XC1 points lead with
123 points, while Mullins sits second with 121. Whibley
is third in the standings with 103 points.

In the XC2 division, Steward Baylor Jr. nabbed his
third win of the season, coming out on top of a
fierce battle with fellow KTM rider Jesse
Robinson. Baylor came from the back of the pack
after getting off to a poor start and once at the
front he swapped the lead several times with
Robinson before taking the win. Less than two
seconds was all that separated them at the finish.
‘We were tire to tire for most of the race, and it
came down to the finish,’ said Baylor. ‘It was an
incredible race.’
Robinson’s runner-up finish was his first podium
since taking the win at round two in Georgia.
‘Stu was faster in a couple of sections and I was
faster in a couple of sections and we both knew
where the racing was going to happen and we
went in there every man for himself,’ said
Robinson. ‘At the end, Stu had a line on me and just rode right around me.’
Brad Bakken claimed his second podium of the year with a third place finish.
‘I’m super-pumped to be up here, I had a four-kicker on the start so I was way back there in the
beginning,’ said Bakken. ‘I just charged really hard and worked up. Andrew DeLong and I battled back and
forth for most of the race and I passed him about a mile before the finish.’
FAR Husqvarna’s Jason Thomas was fifth, behind DeLong, while Am-Pro/FMF/Yamaha’s Jordan Ashburn
beat out JG Off-road/GEICO Powersports Honda’s Scotty Watkins for sixth.
Zack Nolan (KTM), Ryan Lojak (Yam) and Ted
Mullins (Yam) rounded out the top 10.
Meanwhile, Cody Cragg grabbed the holeshot to
start the XC2 race to claim the $100
Motosport.com Holeshot Award.
Mark Heresco Jr. was the top finishing ‘Non-Pro’
rider, taking the 250 A class win with a 19th
overall finish.