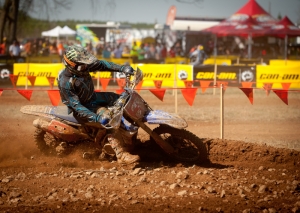 Washington, GA (March 13, 2011) – Paul Whibley returned to top of the podium after taking a solid win at the Maxxis General GNCC in Washington, Georgia, round two of the 2011 Can-Am Grand National Cross Series.

After finishing out last season with two straight wins, the Am Pro/FMF/Yamaha rider came into the 2011 series with high hopes. However, a close encounter with a tree at the season opener in Florida left him with a disappointing ninth place finish – not what he was hoping for.

At the Maxxis General, however, a strong performance in the red Georgia clay, which saw Whibley lead the final two laps of the seven-lap race, put the 2009 series champ right back in the championship hunt with lots of racing still left on the schedule.

‘This certainly puts me in the hunt,’ said Whibley. ‘This is a good way to come back out and at least I know I’m on pace with these guys. I feel good, the bike is good and everything went well.’

Nate Kanney kicked things off by grabbing the holeshot in the XC1 class and picked up the $250 Motosport.com Holeshot Award for doing so.

Photo By: Shan Moore
Josh Strang was a solid second in Georgia.

For the first few laps it was an exciting free-for-all up front, with Whibley, Kanney, Cory Buttrick, Whibley’s Am Pro teammate Thad DuVall, defending series champ Josh Strang, and Florida winner Charlie Mullins, all mixing it up. When things started sorting themselves out at the halfway mark, it was Strang on his FMF/Makita Suzuki, and the two Yamaha riders, Whibley and DuVall, in a tight formation at the front. A few seconds back came Buttrick on his FMF-backed factory KTM, while Kanney ran in fifth on his WMR/Planet Fitness/KTM.

With two laps to go, Whibley made his move for the lead, taking the position from DuVall. A lap later, DuVall stalled his bike, letting Strang go by, and the top three positions were set.

Whibley took the win a good 20 seconds ahead of Strang, with DuVall getting the checkers another nine seconds back.

‘We were passing back and forth for most of the race,’ said Whibley. ‘Strang upped the pace late in the race and I had to pick it up too. I was able to get the lead at the two-second board and I just rode a steady race after that.’

Photo By: Shan Moore
Thad DuVall rounded out the podium.

Strang led early in the race, but missed a line in the mud, allowing Whibley and DuVall to go around. However, Australian off-road star moved back up into the lead position later in the race, but ultimately gave way to Whibley. His second place finish moves him into second overall in the points standings.

‘I couldn’t catch Whibs at the end, he was going good,’ said Strang. ‘We’re just two races in and hopefully I’ll work the bugs out. These boys were going quick and it was a fun race.’

DuVall wasn’t pleased with third, after running with the lead group for most of the race.

‘I should have done a lot better, but I had some problems on the last lap,’ said DuVall. ‘I rode a good race, and when Paul caught me at the two-second board I tried to stay with him but I ended up stalling it and Josh got around me and that was it.’

Fourth went to Buttrick, who now sits fourth overall in the standings.

‘At the end of the day I have to be happy with fourth,’ said Buttrick. ‘I was running at the front and I was happy with that because there are some pretty fast guys in this class. We were kind of freight-training all day. If you went down you could go from first to fifth.’

Kanney finished out the day in fifth, while Mullins was sixth.

Garret Edminsten put his Kawasaki into seventh, ahead of JG Off-road/GEICO Powersports/Honda’s Jimmy Jarrett. Meanwhile, a pair of former national enduro champions, Russell Bobbitt on a KTM, and Mike Lafferty on a Husaberg, rounded out the top 10.

In the XC2 class, KTM-mounted Jesse Robinson rebounded from a bad start to claim his first win of the year, beating out round-one winner Steward Baylor Jr. and FAR Husqvarna’s Jason Thomas.

‘I got horrible start, so I just put my head down took some chances,’ said Robinson. ‘I hit some mud holes that I didn’t know how deep they were, but I just floated across them. I got up to the front and caught Jason and went around him. After that I just kept my handle bars out of the first and here we are.’

Second went to Baylor, who battled with arm pump early in the race.

‘The second I hit the woods I got arm pump,’ said Baylor. ‘I was trying as hard as I could, and I got close but not close enough. I know I can do it, I just had a little bad luck today.’

Meanwhile, Thomas was third after suffering a brutal crash on the opening lap.

‘I was going down a fast section and the thing just fired me over the bars,’ said Thomas. ‘I think my camelback saved me because it exploded on my back. I got up and got going, but I took a few laps to see what the bike was doing. I gradually picked my way back up to third.’

Obanion went home with a little extra cash after taking the $100 Motosport.com Holeshot Award by grabbing the holeshot to start the XC2 race.

In the A.M. race, over 440 riders took to the track with KTM rider Corey Arbogast making a last second pass on six-time National Hare Scrambles champion Jason Raines to take the overall win.

‘I didn’t get the best of starts and I just started picking people off,’ said Arbogast. ‘We had a great battle and I wasn’t sure who was going to win. Jason had to gas on the last lap and that gave me enough to get the win.’

‘I knew I had to ride hard today in the mud and I just made the best of it and it paid off,’ said Lee.

The 2011 Can-Am Grand National Cross Country Series returns in two weeks, March 26-27, for round three at the FMF Steele Creek GNCC in Morganton, South Carolina.  ATV practice will take place on Saturday and racing on Sunday, followed by bike practice on Monday and racing on Tuesday.  For more information, go to www.gnccracing.com.