WHIBLEY ‘TREATS’ HIMSELF TO ANOTHER MOOSE RUN WIN! 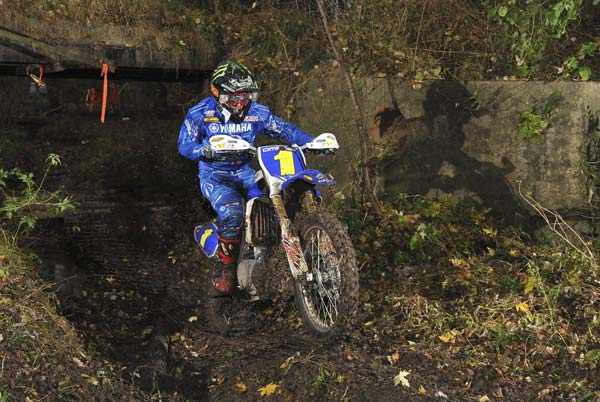 Whibley treats himself to another Moose Run win

The second and final lap of the Moose Run found Paul Whibley accompanied only by his shadows as he finished out the series with nine straight wins and his record-tying fourth straight series championship.

Like the Halloween holiday, the Moose Run is all about tricks and treats. The main trick, of course, is to remember that it’s a very long, relentless race where just getting to the finish line is never a given. The big treat is getting to that finish line because if you do, chances are you’ll do pretty good.

This year’s Moose Run–presented by Moose Racing and serving as the 10th and final round of the Parts Unlimited Off-road Motorcycle and ATV Nationals–saw FMF/AmPro Yamaha’s Paul Whibley roll to his ninth straight OMA victory. He’d clinched his record-tying fourth consecutive series championship (a mark he now shares with Jimmy Jarrett of the American Honda/GEICO Powersports/JG Off-road team) at round eight so he could’ve been excused for just going through the motions, but when Whibley lines up for a race, he’s there to win.

And he did just that, of course. With promoter Bill Gusse laying out his normal long loop (this one 38.3 miles around the Fenton, Illinois, area according to multi-time winner Jeff Fredette’s odometer) spiked with wonderful diversity, Whibley learned long ago that the first loop is just for getting acquainted and seeing where the trail goes. That leads to a very tight pack, with the front-runners acting almost like they’re on a Sunday trail ride.

Though Paul Whibley stuck to a nice, safe inside line going into the first turn, Adam Bonneur (7) held it open on the outside and generated enough drive there in the fourth-gear sweeper to pass Whibley and earn the $200 FMF Holeshot Award. He would spend most of the race holding off Scott Watkins, surrendering third place in the latter stages due to a crash but holding on for fourth.

The real racing takes place on the second lap after they’ve gotten their bearings.

At that point, the trail is burned in and the pace intensifies. Jarrett clung close to Whibley for a while, but he eventually found it impossible to stay with his former neighbor and riding partner, finishing less than two minutes behind after some three and a quarter hours of racing. The reason Whibley wins is because he’s both smart and fast: “You never know. It’s one of those races where a minute and a half can disappear pretty fast so you’ve always got to be on your toes.”

Jimmy Jarrett managed to stay closest to Whibley for the longest but couldn’t quite match Whibley’s pace over the last lap and settled for second. That matched his best finish of the season at round two, not the kind of season the four-time champ was hoping for. Still, second unofficially moved him up a spot to fourth in final series points behind Whibley, Jordan Ashburn (who skipped the Moose Run) and teammate Scott Watkins.

One of the best battles to watch was between local favorite Adam Bonneur and Jarrett’s teammate, Scott Watkins. Having grown up racing in the area, K Motosports Kawasaki’s Bonneur blitzed the ultra-fast, rough open corn field sections like he was racing in Baja. In fact, he started the race by trailing Whibley into the first bend, but he kept it pinned and rode around the outside of Whibley in that high-speed sweeper (situated in a corn field that had just been harvested on Friday) to earn his first $200 FMF Holeshot Award.

After that dose of glory, he found himself in a see-saw tussle over third place with Watkins, who seemed to gain most of his ground in the more technical woods sections.

Scott Watkins, interviewed here by promoter Bill Gusse, took advantage of a late-race crash by Adam Bonneur to finish third for the fourth round in a row. He was a clear third in final series points.

But it remained a question mark until Bonneur crashed in the final miles, leaving him with no front brake and little hope of catching back up to the fleeing Honda. Still, fourth was Bonneur’s best finish of the season, which he joined late.

A crash in the first few miles left Brett Zofchak with a lot of ground to make up, but the Moose Run is long and tough enough (even in its current ‘tamer’ edition) that you can often recover from that kind of mistake. He did and battled back to fifth place, his best finish of the year.

Brett Zofchak spent all day recovering from a crash in the early miles, but the Stiller Motorsports KTM racer never gave up and came back to claim a strong fifth place. Suzuki privateer Shane Klimek was another local who put his knowledge of the conditions to good use, actually leading for a few brief minutes in the early going and running with the lead pack before ultimately earning sixth place.

Whibley now has one more race weekend in the U.S. before taking his annual Christmas/New Year’s holiday back home in New Zealand. When he returns next year, he’ll be gunning to break the tie with Jarrett and make it five in a row.

Race Around the Lake returns!