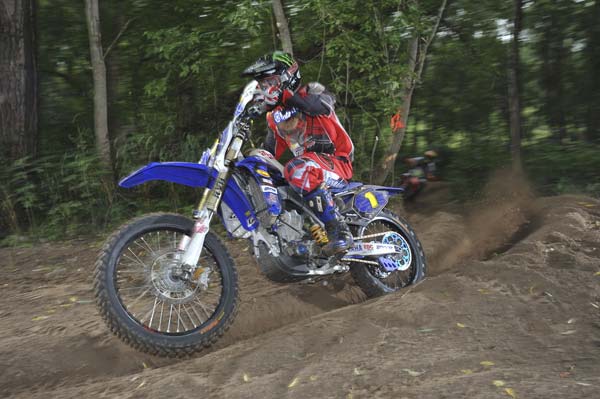 Who else but Whibley? If you count last year’s streak of winning the final nine rounds en route to earning his fourth OMA championship, Paul Whibley stretched that to 15 in a row by winning the FMF Spring Creek Grand Prix, round six of the current Parts Unlimited OMA Nationals, held on a very warm and humid day (but with almost ideal course conditions) near Millville, Minnesota.

Russell Bobbitt did beat Whibley to the first turn, thus earning the $100 FMF Holeshot Award. But later on the first lap, the enduro star got out of shape and surrendered the lead. Whibley would not and Bobbitt settled for second for the third time this season.

After carefully walking the start straight and first turn as is his usual practice, Whibley found himself trailing the extremely quick 300 XC of FMF/KTM Factory Off-Road Racing Team’s Russell Bobbitt, who was only too happy to pocket the $100 FMF Holeshot Award.

But not long afterwards, Bobbitt uncharacteristically bobbled on a downhill. When he did that, Whibley reported, “I just snuck past him.

“He stayed pretty close for a couple laps–it was like four seconds, [then] nine seconds I think I remember seeing on the pit board–then when he gassed, I got away from him and he never closed back in again.”

Indeed, at the finish, Whibley had a very comfortable lead of two minutes and 21 seconds over Bobbitt while Husaberg’s Nick Fahringer pulled up to the finish and additional 2:09 behind.

Round seven in two weeks in Indiana promises to provide more of the same–at least in heat and humidity–but Whibley will undoubtedly try to keep his name atop the win column.

Never bet against Matt Stavish at Millville. Now 44 years young, he rode like he was 10–or more!–years younger, dueling

hard with eventual 30-39 A winner Steve Leivan for much of the race (after starting on the same row). Stavish eventually

shook free to take 40-49 A and end up fifth overall, the first A overall.