Whibley over Ashburn again at OMA 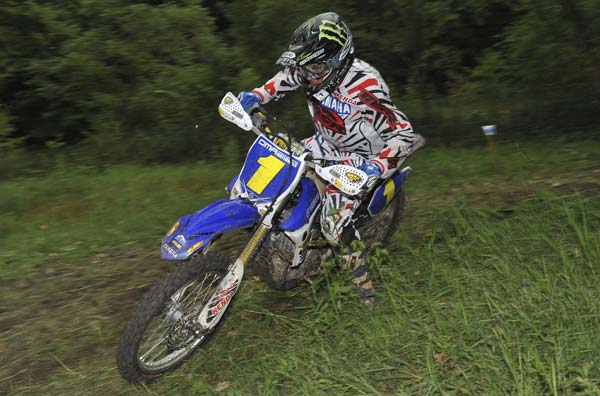 With the large field of riders thanks to co-sanctioning with the Iowa Enduro Riders Association, Paul Whibley started running into lapped traffic very quickly but just as quickly dispatched them to win his sixth OMA in a row, further extending his points lead.

By winning the Sidi Blackhawk Cross-country National, round seven of the Parts Unlimited Off-road Motorcycle and ATV Nationals, FMF/Am Pro Yamaha’s Paul Whibley could easily miss one round and still be in the driver’s seat for a record-tying fourth consecutive series championship.

But it’d be a lot easier for him if Obermeyer Yamaha’s Jordan Ashburn wasn’t such a thorn in his side. Once again, the youngster from Tennessee finished second overall, though he used his YZ250F instead of the 450 he’d been using all season and found himself closer to Whibley than ever. It marked his third straight runner-up finish (and fourth runner-up this season) and kept alive his perfect record of podium finishes this season, a record exceeded only by Whibley who not only has podiumed every round but now has six victories in a row after starting the season with a second (behind Russell Bobbitt).

Whibley got off to the best start possible and earned the $200 FMF Holeshot Award bonus to get things rolling. But with the amount of skatey hard-pack and rocks, he wasn’t entirely comfortable in the early going.

Jordan Ashburn used his series debut aboard a YZ250F to good effect, despite a dead-last start. He quickly worked into the lead pack and hounded Whibley until the final lap when he ran out of brake pads, settling for second.

“I was playing it a little bit too cautious [at first] and Jordan and Chris [Bach] came up and raced me,” Whibley said. “But it was good. It gave me a little bit of a reason to go faster, and then I started getting more comfortable with the pace those guys were running.”

Indeed, American Beta’s Bach actually passed and led for a bit, but then his bike suddenly stopped. A quick inspection revealed something had turned the petcock off so he turned it back on and got going again, once again getting into first. Unfortunately for him, his 450 RR died a second time and this time he discovered that this time something broke the petcock in half, ending his day.

“I just can’t seem to catch a break here lately,” he lamented. “It’s just been bad luck after bad luck.”

Ashburn, unlike Whibley, had a horrible start and blitzed the first lap to move into third place, with the leaders well within range. After Bach went out, he went after Whibley. “I tried to make a move on him a couple times today so it was pretty fun,” Ashburn shared.

“Jordan was riding super-fast at the end! It looks like he’s loving that little 250F. It was a good race at the end,” Whibley noted.

Well, it was a good race until the last lap when Ashburn found he’d completely worn through the rear-brake pads and had to let Whibley go. “Whibs” would end up completing seven laps of the eight-mile course around the Wenck Family Farm in two hours and 20 minutes, Ashburn holding on for second in 2:22:10.

American Honda/GEICO Powersports/JG Off-road’s Scott Watkins found himself alone most of the day and claimed third in 2:23:51 for his first podium since round four. That puts him firmly in third in points behind Whibley and Ashburn.

Scott Watkins loved the new venue and drew his motivation from just riding, despite being a lonely third.Jordan Ashburn used his series debut aboard a YZ250F to good effect, despite a dead-last start. He quickly worked into the lead pack and hounded Whibley until the final lap when he ran out of brake pads, settling for second.

“It was a good day,” Watkins said. “This was probably the best track that the OMAs have had all year. It just had everything–water, hills, rocks–so as far as a rider [viewpoint], you were just pumped to be out there.”

Adam Bonneur finished fourth, just 12 seconds ahead of Open A winner Wyatt Setterburg, the first local. Pro Michael Williams earned sixth despite not remembering much after a big crash while Lite A winner Derek Spangler finished seventh overall followed by 40-49 A winner Matt Stavish and Lite A riders Brandon Farnum and Stan Gregory.

Remember, round eight has changed venues to Erie, Illinois, though the date of September 17-18 remains the same.

Wyatt Setterburg quickly seized control of the very large Open A contingent and not only won the class and was first A to the finish, he placed fifth overall.

Spectators had plenty of great viewing areas, though most of the creekbeds were full of water.