Whibley hold off Watkins for another OMA win! 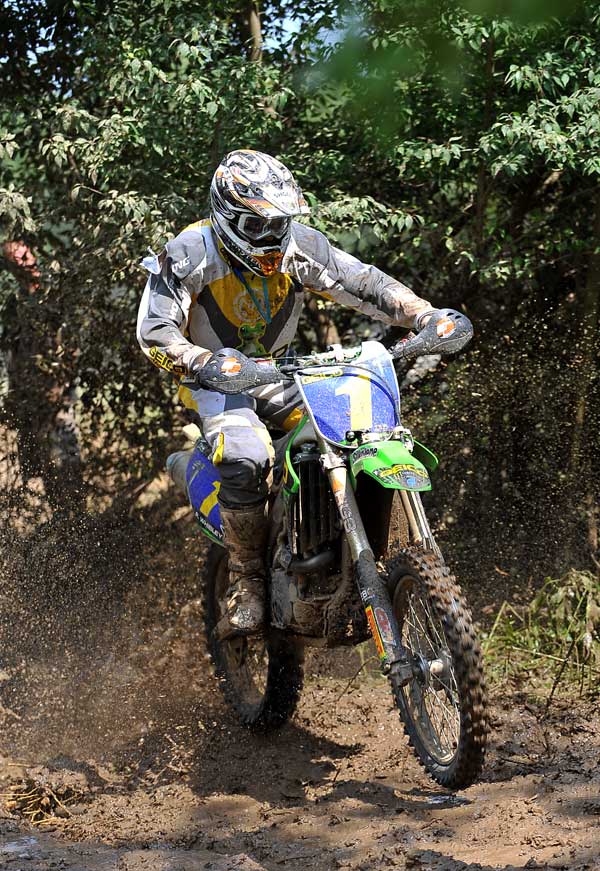 Watkins gives Whibley a run for a while in Missouri

Paul Whibley successfully fought off another 250F challenge to win the first race ever held at the end of Truman Road outside of Festus, Missouri, running his OMA season record to seven out of seven.

With Jimmy Jarrett out for a while with a broken wrist, Scott Watkins has assumed the role of backup to top dog Paul Whibley on the JG Off-road/GEICO Powersports/Monster Energy Kawasaki team.

Whibley got the $100 Bike Barn Holeshot Award on his KX450F, as he’d done so many times before this year in the Parts Unlimited Off-road Motorcycle and ATV Nationals. But he didn’t check out at the Sidi Mizzou Cross-country National outside of Festus, Missouri, round seven of the series.

Instead, Watkins began a push that steadily closed the gap once he’d untangled himself from the pack after a few laps on the nearly eight miles of virgin trail. With Jarrett running the team’s pits, Watkins could see he was catching the defending series champ and took the lead when Whibley pitted for his scheduled fuel stop.

It didn’t last forever, though, as Whibley stormed past the KX250F just before Watkins pitted, though Watkins stayed with him for quite a while until Whibley’s pace proved too much in the hot, humid conditions. Whibley ended up besting Watkins by 24 seconds.

“I actually went to sleep a little bit and slowed down a little bit too much in the middle of the race and allowed Scotty to get back in [the mix],” Whibley admitted. “When he passed me, it fired me up a little bit again.”

In his first year of OMA racing, Scott Watkins has improved to the point where he led Whibley for almost a lap on his 250F, finishing runner-up for the third time this season and cementing his hold on second in points.

Far from being disappointed at taking runner-up for the third time this season, Watkins was stoked with finally being able to give Whibley a run, saying, “After today, I feel that I have at least a shot at, maybe, winning one of these. Just to be able to run out there up front, you finally say, ‘Wow, I’ve got the pace.’ It’ll boost your confidence.”

Husaberg’s Nick Fahringer also got a boost of confidence after rounding out the Pro podium on his FE 450 for the first time this season—and the second time in two weeks after finally getting on the podium at the AMA National enduro in Michigan the week before.

Unlike the last round, Nick Fahringer had a relatively uneventful day, but he felt he would’ve gone faster had he not been alone for most of it. He placed third Pro, but his total time meant two A riders beat him in the overall results.

However, Fahringer didn’t post the third-fastest time. Jake Fiddler came from the second row (Lite A’s at this round) on his KX250F and had a day where things went very right. Not only did he win his class and beat Chris Bach out for top A overall, Fiddler’s total time proved to be the third fastest of the entire field. He’s obviously returned to top form from his broken collarbone and is now prepared to step into the Pro division at round eight in Indiana in two weeks.

Jake Fiddler made his season debut after being out with a broken collarbone for most of the year and he’s better than ever. Only two racers–Whibley and Watkins–beat the Lite A winner’s total time. Look out when he rides the Pro class at round eight!

Open A winner Bach on a KX450F just squeaked by Fahringer in total time by two seconds, giving him fourth overall even after getting stuck in one creek crossing, while the Husaberg rider kicked himself for not charging harder and ending up fifth overall but still on the Pro podium.

Jimmy Jarrett showed up in Missouri to help pit his teammates. He has a removable brace/soft cast on his surgically repaired right wrist and actually started the race, though he rode only to the first turn. Still, he earned points that he hopes will keep him third in the standings at the end of the season.