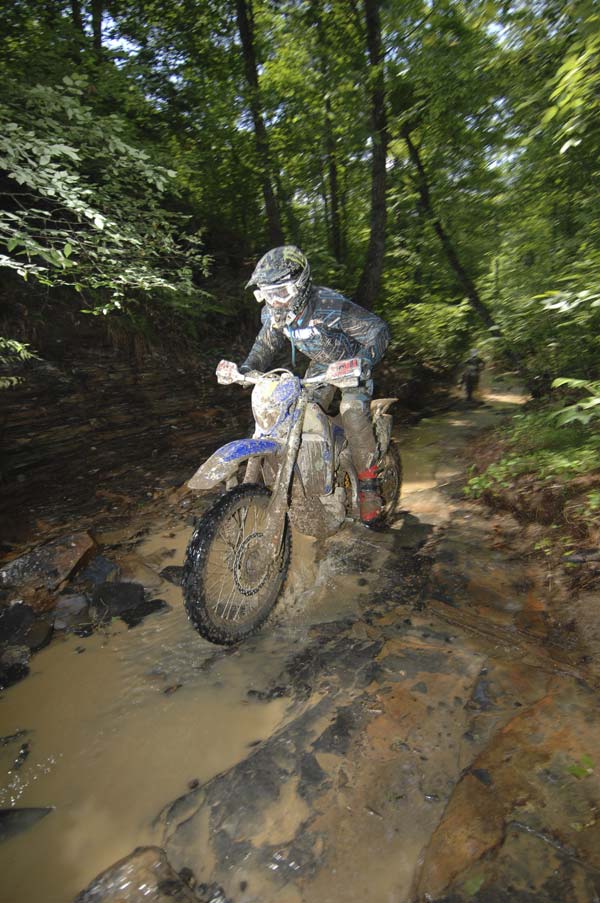 Is he finally back to his winning ways? Only time will tell, but Paul Whibley kept his championship hopes alive by winning in Kentucky.

Whibley has it his way at hot Whiskey Run in Kentucky

“I knew we could do it, but it’s been little things that have held us back in the first part of the season,” Paul Whibley said. “Hopefully, I’ve got all my bad luck out of the way and I can kind of continue moving forward from here and get some more good results.”

By bad luck, Whibley meant the totally random issues like getting center-punched and losing his brakes or snapping the brake pedal off, things that prevented decent showings at the first two rounds.

By good results, he referred to his victory at the FMF Whiskey Run Cross-country National at Mountain Parkway Off-road in Clay City, Kentucky, round four of the Parts Unlimited Off-road Motorcycle and ATV Nationals. Remarkably, it was his first win of the season in the series that he dominated last year, winning all 10 rounds. In other words, he hadn’t won a race since October.

But the Am-Pro/FMF Yamaha racer put that behind him in Kentucky, jumping in behind Jordan Ashburn at the start, the young Monster Energy Kawasaki Team Green rider earning his third $200 K&N Filters Holeshot Award of the year. (Unfortunately for Ashburn, his race took a turn for the worse immediately afterward when he lost the front end and hit the deck just before they ducked into the woods. He was up and going without injury, even after Jimmy Jarrett apparently ran over his legs, and quickly caught back up to the pack.)

Jimmy Jarrett led much of the first half but couldn’t stay with Whibley in the second half and settled for the runner-up spot–a place he also holds in series points where he’s tied with Thad Duvall.

Officially, JG Off-road/GEICO Powersports/Monster Energy Kawasaki KX450F-mounted Jarrett led the first couple laps, but in reality he was far from alone. Whibley and round three winner Duvall also took turns at the front while Scott Watkins, Nick Fahringer and Ashburn stayed in the mix as well.

Thad Duvall was among the leaders in the first half, but a large stick stopped his rear wheel, requiring three people to remove it before he could get going again. The winner of two rounds so far, he finished fifth in class and is tied for second in points.

But as the race hit the halfway point, Whibley went from third to the front to stay on his WR450F after throwing in a lap almost a minute faster than he’d been running. Duvall made it a Yamaha 1-2 until he got a large stick stuck in his back wheel. “I was beating it with my helmet–I was trying to get this thing out–and I couldn’t get it out!” he exclaimed. “It took three of us to get it out.”

Naturally, that set him back and he’d eventually take fifth Pro, seventh overall.

And that left Whibley and Jarrett alone in front. But unlike the first half, during the second half Whibley had no intention of letting anyone else lead again. He quickly put 20 seconds on Jarrett, then 50, then a minute and 15. “The more I tried [to catch Whibley], the more mistakes I made and I was getting more tired and hot so I just backed it down and let him go,” round-two winner Jarrett admitted. “I knew we had a pretty good gap on third.”

No one’s been more consistent in the series thus far than Scott Watkins; he’s been on the podium at all four rounds and remains atop the points chase after getting third in Kentucky.

And that would be the super-consistent Scott Watkins, Jarrett’s teammate. The series points leader after going 2-2-3 in the first three rounds, Watkins remained atop the points table with another third-place finish.

Despite smashing his right foot between a stump and his footpeg just after the halfway point and dropping off the pace, Nick Fahringer was satisfied with fourth for the day.

Husaberg’s Fahringer ended up a comparatively distant fourth after smashing his right foot between a stump and the footpeg of his FX 450 in the last half of the race. Zach Klamfoth had a great day on his Sport Cycles Racing YZ250 to not only win Open A but earn fifth overall. Michael Williams kept his string of Lite A victories alive and finished sixth overall aboard his Barry Heath Racing KX250F followed by Duvall, Adam Bonneur,  Open A runner-up Jake Fiddler and Shane Klimek.

The points race tightened considerably after this hot, humid event. Watkins still leads with his 92, while Duvall and Jarrett are now tied for second with 85 each. Whibley is fourth, just one point behind them, while Ashburn holds fifth with 68.

Now comes a four-week break before round five in Michigan.

Matrix Concepts and Bob Hannah will be at Mammoth MX this year!