In the early ’90s, professional motocross, Supercross and most other forms of motorized racing were supported enthusiastically by Big Tobacco. The irony of this was not lost on Roger DeCoster, even through he wore Camel logos through most of his career. In 1994,  it appeared the romance between Supercross and tobacco was finally coming to an end. Here’s what Roger had to say in his March, 1994 column in Dirt Bike Magazine.

As long as I have been involved with motocross, we have faced the same problem: Where does the money come from? We know where it goes–that’s easy–but where do we get the money to hold races, pay riders and generally keep the sport healthy?

For years now, part of the answer has come from the tobacco industry. Camel has been the main sponsor in Supercross. It was, in a way, a gift from the federal government. Since tobacco advertising has been banned from television since the early ’70s, the only way the various logos could get wide exposure was by companies being involved with events that were televised or shown in front of big audiences by some other means (like in a stadium). With the air time Supercross was filling on ESPN, our sport was a natural beneficiary.

Now, however, that might be over. In September, Camel announced it would not sponsor any Supercross events in ’94. It still would offer a rider’s point fund, but because of a change in marketing strategy, Camel could offer nothing approaching its commitments in earlier years. Making matters worse is the competition for the money that Camel is offering. Originally this point fund was to be $200,000, but the AMA redirected $50,000 to the dirt track series. What is the “change in marketing strategy”? We don’t know for sure, but Camel just announced the “Smokin’ Joe Racing Team” would sponsor two NASCAR teams and cars in NHRA drag racing, so obviously, Camel executives are shifting towards other forms of racing.

One big factor that comes into play is a proposed ban on tobacco advertising inside stadiums. This hasn’t passed, and even if it does, it couldn’t go into effect until ’95, so it’s not the only reason for Camel’s shift in interest. It seems likely that Camel felt its money would be more effectively spent elsewhere.

That means we need to sit down and ask ourselves why we have such a hard time attracting and keeping corporate sponsors. Is Supercross a good or bad value in the advertising game? Looking at the subject objectively, as an outsider would, I have to admit that there are several reasons not to sponsor Supercross:

• No one has done it in the past, at least not for individual racers on a substantial scale. Advertisers don’t want to gamble with their money. They would rather go down the proven avenues taken by their competitors (air time during the SuperBowl, NASCAR, etc.).

• There is limited surface on a motorcycle for advertising. Even with Rhino covers on the sides of the bike, the space is much smaller than that offered by a car. This is a bigger problem for individual sponsorship than for event sponsorship.

• Some advertisers seem to be put off by the noise. This is silly, because virtually all sports are noisy, and very little advertising is done over the stadium’s audio system, but bike noise still seems to be a hurdle for us to overcome before the sport has a clean, wholesome image.

• Supercross is still a very small sport. Football and (ugh!) baseball are much bigger and have guaranteed television audiences.

• TV coverage of Supercross is spotty at best. ESPN has done a good job, but coverage isn’t always at decent hours, and isn’t very timely. 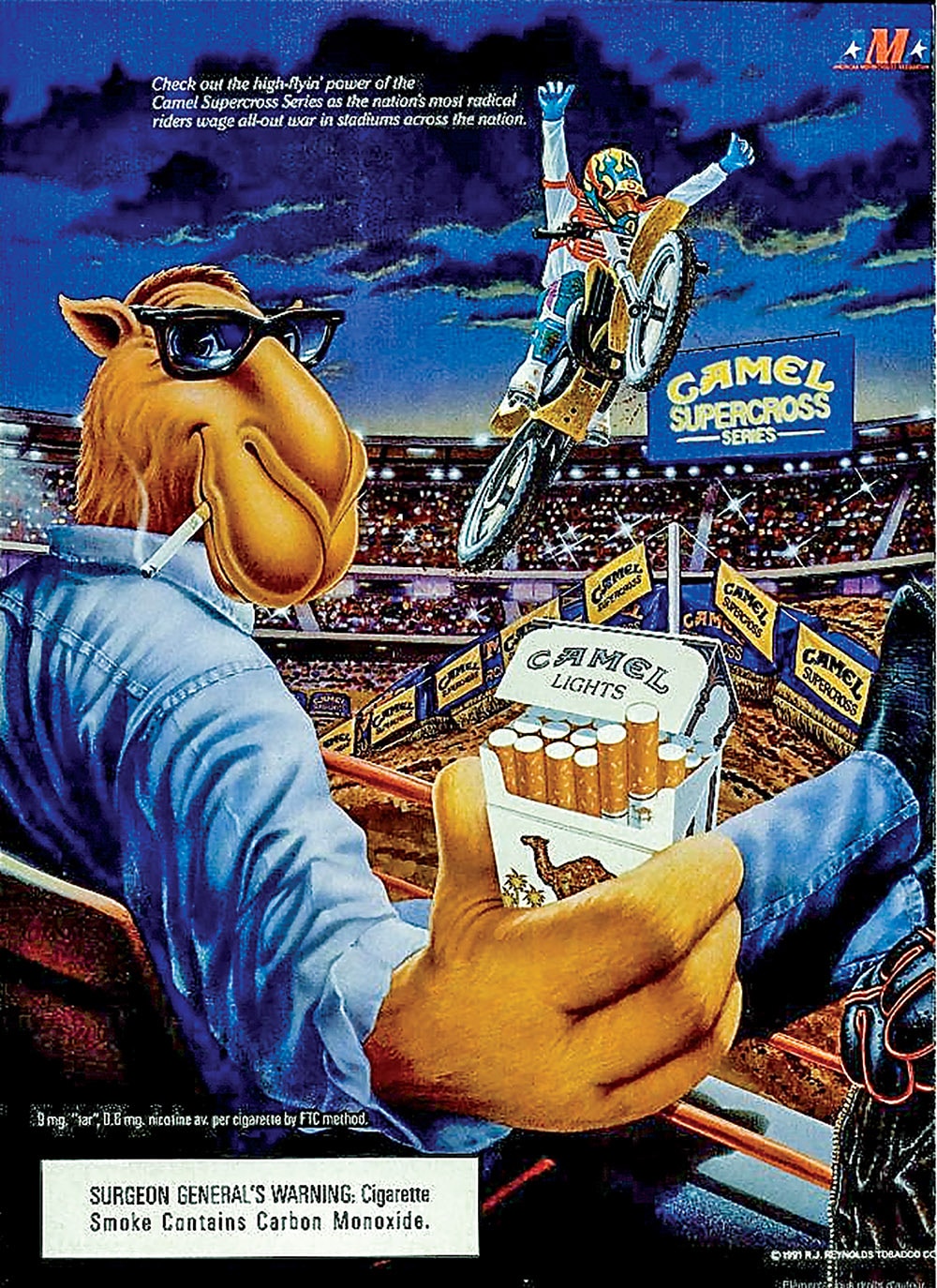 If you look at all of this, then it’s hard to understand why we have received as much sponsorship as we have. The truth is, though, that none of these factors are legitimate reasons for a smart sponsor not to be involved. They are, for the most part, results of bad P.R., and don’t affect the true bottom line, which is: “How much can a sponsor make by being involved in the sport?” Once you discount bias and look at it objectively, there are a multitude of reasons why Supercross would be a good investment.

• The audience at a Supercross is made up primarily of affluent young males. There is no better target for a company that wants to sell a product-almost any product. This group is very active socially, and that means they buy more beverages, food and recreational playthings-s-a demographically perfect group for Pepsi, Toyota, Levis, etc.

• Supercross ·is an exciting sport to watch. When a motorcycle is flying 80 feet through the air, virtually all eyes are on it. That’s not necessarily true of some other sports, where there are long dead times when nothing is happening.

• In Europe, race promotion is a much more accepted means of advertising a product. In other parts of the world, there is little question that exposure on a motocross track results in sales.

• The sport is, in reality, very cleancut. Drug use among riders is very rare (they can’t do drugs and still perform), they look good because they have to be in shape, they usually come from solid families (MX requires a lot of parental support from an early age) and they are good speakers. Virtually every rider on the track is a good spokesman for a sponsor, especially compared to the average boxer or professional wrestler.

• Supercross is visually striking. Some American companies that have nothing to do with sport have already noticed this. In several issues of the Wall Street Journal, Digital placed a two-page ad featuring a group of motorcycles going over a jump. The photo was used for no other reason than to grab attention.
So, while I’m sure that Camel’s withdrawal will hurt in the short run, it isn’t the end of the world. Supercross is a good product and it will sell. It might take a little work from a few good salesmen–unfortunately, the adage about the world beating its way to your doorstep for a better mousetrap simply isn’t true. You need to take the world by the hand, show it the path and the doorstep, then stick its fingers in the mousetrap. Once caught, though, I’m sure that the world will agree. Supercross is a bargain.