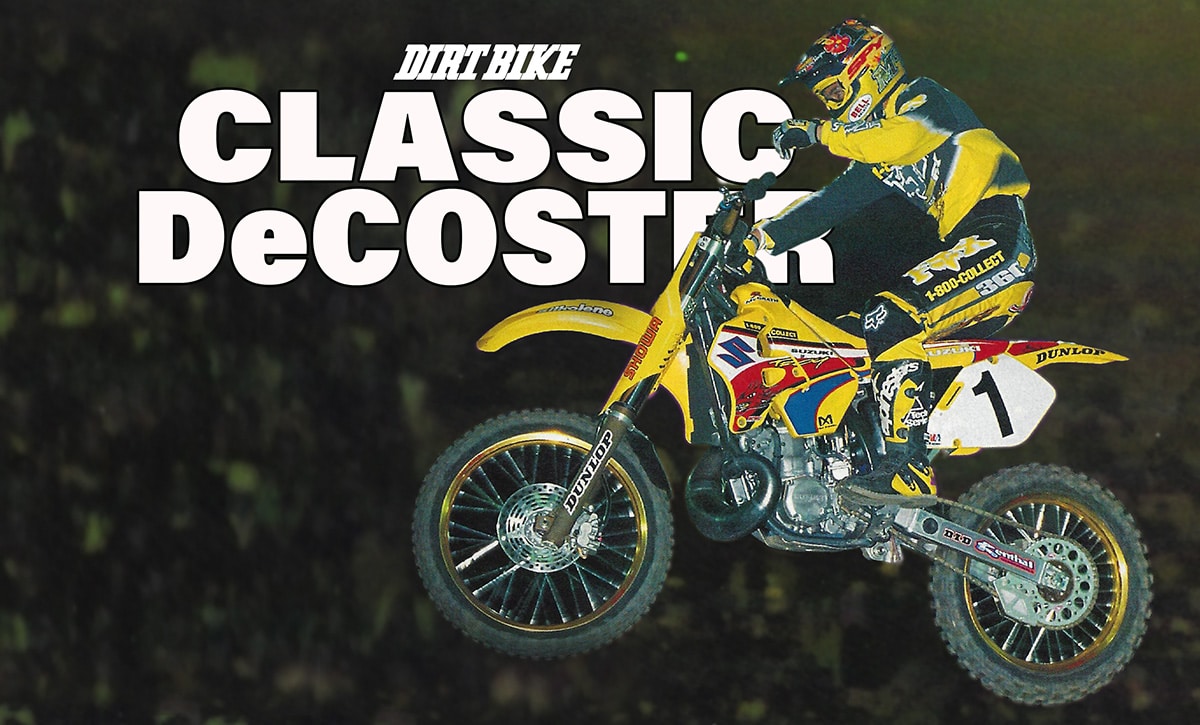 At the end of 1996, Jeremy McGrath was already the greatest supercross rider in the history of the sport.  The news of his switch from Honda to Suzuki rocked the industry to its core. This was a major score for Roger DeCoster, who was still very new as Suzuki Team manager. In the March, 1997 issue of Dirt Bike, Roger described how it all came together.

It looked like things had finally settled down. The U.S. race season was over. The overseas supercross season was over. My ’97 race team was inked. I had re-signed Tim Ferry for the Eastern 125 Supercross Championship, with Greg Albertyn and Mike LaRocco for the 250 class. On top of that, I had acquired Mickael Pichon for the 250 class in supercross and the 125 class outdoors. Also, I had just signed Nathan Ramsey for the Western 125 class. I don’t mind saying that I was pretty pleased. Suzuki, it seemed, would have one of the most well-rounded teams in ’97. I planned on taking some time off, and booked a ski trip to Mammoth.

Then the phone rang. It was the man who works as an agent for most of the best motocross riders in the country. Yes, even motocrossers have agents these days-they would be foolish not to. Some contracts have seven-digit potential. What he asked took me completely by surprise.

“Would you be interested in having Jeremy McGrath ride for you?”

My first reaction was cautious: “I don’t think there’s enough room in my budget for him.” That was an under-statement. I didn’t know exactly what Jeremy made, but if anyone was in that seven-digit tax bracket, it would be him.

He explained that while Jeremy wouldn’t work for free, several outside sponsors were connected with him. If he came to Suzuki, so would the sponsors. In subsequent calls with Jeremy, I learned that money wasn’t the main issue. He hadn’t been happy with the handling of the new aluminum-frame race bike. That wasn’t a surprise. Everyone knew that Jeremy was struggling in the Japanese and European Supercrosses. He had raced the new bike five times–three times in French supercrosses and twice in Japan. Of those races he had won one but finished off the podium four times. Actually, in Tokyo he fell in practice and didn’t even start the race. Still, it wouldn’t be realistic to expect him to go straight to the top on the new bike. He had been racing the same basic machine since ’93–it wasn’t, in fact, that different from the bike that Jean-Michele Bayle had raced when I was at Honda. The new bike would need development.

There were other problems, though–ones that Jeremy could probably express better than I. Apparently he didn’t like some of the terms of his new Honda contract, which included so many restrictions that Jeremy couldn’t be Jeremy anymore. Whatever the reasons, he had become unhappy and was looking for a change. The bike was his primary concern. Would he like the Suzuki? That we couldn’t find out until later. In the meantime, we talked to Japan to find out if we could support a sixth rider. And we wanted to be sure that Jeremy was clear of any Honda obligations for 1997.

At this point it still seemed a little too good to be true. In the back of my mind I wondered if Jeremy was playing a game. He could have been using me for leverage against Honda. He could have just wanted to ride one of our bikes to see if we had any competitive advantage. Stranger things have happened. However, I pursued the deal with all my energy–I would be crazy not to.

When he finally rode a Suzuki, the test must have gone well. In fact, I think he was a little surprised by how good our bike turned out. Basically, he liked the chassis–he said it felt a lot like his old Honda frame. He was surprised at how well the suspension had worked. The only thing he didn’t like was the power. His Honda, he felt, was a little faster. That, we can work out. If Jeremy had been playing a game, he became serious after riding the bike. We both spent the next few days on the phone, trying to make the switch work. I talked to my boss, and he gave the deal his blessing. When it was all over, Jeremy McGrath became a Suzuki rider.

Now I have some real work to do. We already have built Jeremy a practice/test bike. And, with help from guys like Mitch Payton, we have to build a race bike and find the missing horsepower before the first supercross.

Unlike Kawasaki or Honda, our 250s aren’t built in Japan and shipped over here. We have to uncrate a production RM250 and make it into a racer. That takes time. Some parts come from Japan, but these days we are sourcing more and more of our parts in the U.S. Also, the big question remains: will Jeremy win? I think it’s unlikely that he will duplicate his winning streak of ’95 on any bike. Even Jeremy has to have his limits. Some people have told me that makes the Jeremy move a bad one. They think that people will see him switch to Suzuki and lose more races, and that will reflect poorly on the company. I don’t swallow that. I think anyone who pays attention will realize that Jeremy’s winning streak had already ended long before he got aboard an RM. If he wins just one U.S. supercross for us, that will be more than we won last year. That makes him a good deal. And I bet he will win more than one.