WHAT’S IT TAKE TO BE A REAL WORLD CHAMPIONSHIP? CLASSIC DECOSTER

Back in 1994, Roger DeCoster asked “What makes a World Championship?” It was unclear back then just as it is today. Here’s what he wrote in the May 1994 issue of Dirt Bike.

Last summer I won my sixth world championship title. It was easy; all I did was show up one weekend in Mammoth and race four motos. Actually, it wasn’t too easy–I only won two of the motos-but as world championships go, it seemed easier than most. Just think, it took me ten years to win my first one, and then each of the subsequent titles took a full season of hard work and a full factory works effort. If I had only known that world championships were so easy to collect, then I could have saved myself a lot of trouble and time, and Suzuki could have saved a few million dollars. Of course, that sixth title isn’t quite as prestigious as the others. It was at the Mammoth World Vet Championship. When anyone calls that race a “World Championship,” it’s always with a little bit of a grin. 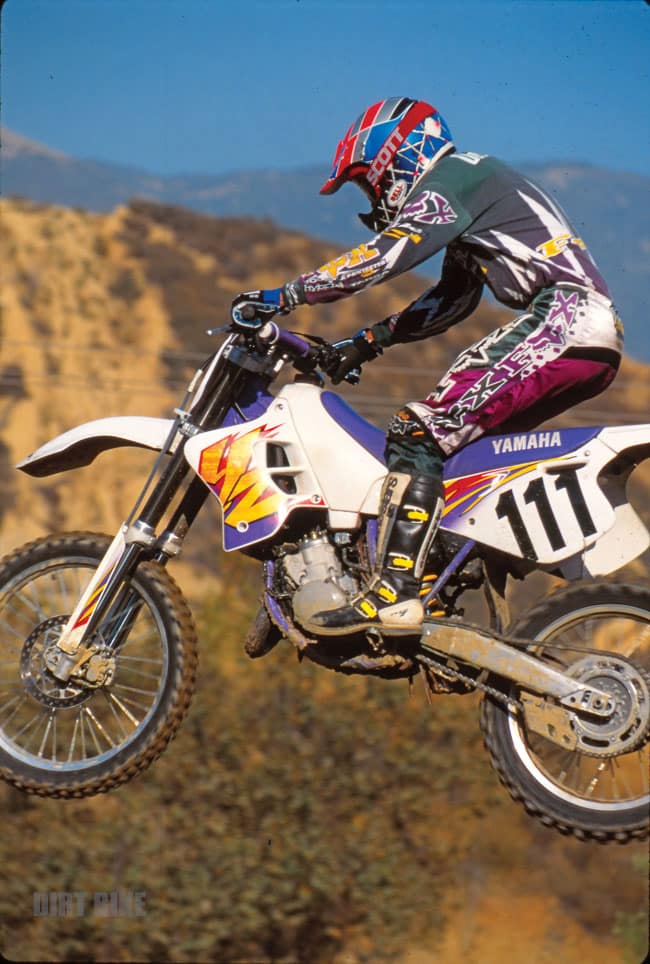 Well, at least I don’t take it very seriously, but I imagine that some people do. There are a number of local events that are self-proclaimed World Championships. There is a World Vet Championship, a World Four-Stroke Championship, a World Pee Wee Championship, a World Hillclimb Championship, and probably even a World Beginner Championship (if there isn’t, there will be now). All of that is fine and probably taken in good humor, but it makes me wonder: What is a real World Championship these days? Does a race or series become a world championship just by saying it is? I’m not talking about these tongue-in-cheek local races. Even if an FIM race in Europe is called a World Championship, is it really? It’s getting hard to tell.
From the beginning of motocross and throughout the ’70s, there was no questioning who were the title holders. They were all Europeans because, basically, it was a European sport. Whenever the top contenders and title holders traveled outside of Europe, they were sure to win. By that reasoning, I suppose, Americans figured it was okay to call North America’s baseball championship series the World Series. Traditionally, the sport hasn’t been big enough elsewhere, and people from other countries (like me) don’t care–except in Japan, where baseball has been big for years.
After my generation of European riders, though, FIM riders had less and less interest in coming to America. Likewise, the top Americans seemed to have no interest in racing in Europe when their own season ended. There were some Americans who specialized in Europe, and did not race much at home, but aside from Danny LaPorte, who won championships on both continents, few top riders crossed over in either direction.

So for a few years it was hard to say who the world champions were. The Europeans probably didn’t question the fact as much as Americans did, but no one knew for sure where the sport was evolving the fastest. On top of that, supercross was growing and becoming a sport of its own–an exclusively American sport. The FIM, European promoters and European riders didn’t take supercross seriously for a long time. In fact, it was Gerrit Wolsink who was the first European promoter to take supercross seriously and actually put one together in Holland. The FIM reluctantly took part. It might have been fair to say that most riders around ’81 or so considered the GPs to be the outdoor World Championship and the AMA supercross series to be the indoor World Championship, but all that was about to change.
In ’82, when America returned to the MX and Trophee des Nations, it messed up the whole system. All of a sudden, the European GP series was demoted a notch. No longer could Europe ignore America, and suddenly the 125, 250 and 500 FIM world titles were no longer above reproach. There was doubt in everyone’s mind; maybe the 500 world champion wasn’t the best 500 rider in the world!
Within a few years the doubt disappeared. As America returned to win the des Nations again and again, it became an accepted fact that the FIM World Championship actually was a European World Championship. Did that mean that the AMA National Champions actually were the real World Champions? No. The Euros were missing in the U.S. series. In supercross, a few promoters banded together to form a world series called the Rodil Cup, but it didn’t catch on. It evolved into the present World Supercross series, but that race isn’t even a good European supercross series–it doesn’t include some of the best events. Throughout the ’80s, motocross was without a world championship.

As odd as it sounds, Jean-Michel Bayle returned a little prestige to the FIM outdoor series by leaving it. When he abandoned his FIM 250 crown to race in America, then won everything in sight over here, I think most Americans developed a new respect for European riders.
So where does that leave us today? What’s the real World Championship? To tell the truth, I have begun to feel like the Motocross des Nations is pretty much the yardstick to measure the best outdoor riders in the world. All the best racers show up, and they try their hardest. Sometimes national pride can be as powerful a motivator as money. Some people might point out that a few top Americans were missing in the last couple of years, but frankly, you can claim that someone is missing in any race, no matter what its status. Is Jeremy McGrath any less of a supercross champion because JMB wasn’t around? No, of course not.
For me, at least, I look at the Motocross des Nations as the single most prestigious race in the world, and even if the riders who win it aren’t dubbed individual world champions, they certainly are in the true sense of the title. In fact, I might even consider the des Nations even more prestigious than the Mammoth World Vet Championship. Now that’s high praise, indeed.