In 1995, Supercross was in a wild-west phase, as different promoters and even different sanctioning bodies struggled for control. Just like today, each area had different soil types, but back then, there were different track builders, too. In the June, 1995 issue of Dirt Bike, Roger DeCoster weighed in with his thoughts on the basics of good track design.

After a supercross, different people use different yardsticks to determine whether or not the track was good or bad. The promoter usually looks at the turnout. If the attendance was good, it was a good track. If they lost money, it must have been a bad track. Motorcycle company executives look at who won. If their rider won, it was a good track; if not, it wasn’t. And of course, some of the spectators just look to see how many and how big the jumps are. If the rider spends more than 50 percent of his time in the air, it must have been a good track. But the track design can have a dramatic affect on the race also. Too many times recently I have heard comments that the race wasn’t very good–not like the old days when Hannah or Johnson used to charge through the pack. What we are seeing isn’t poor riding or riders who don’t try as hard, but just a track which doesn’t allow for close riding. There have always been and always will be volumes of debate on what does and doesn’t make a good track. There are no designs that guarantee a spectacular race, but there are things that can be done to increase the likelihood of a good, safe event. Here are some points that I look at when I first arrive at a new track: 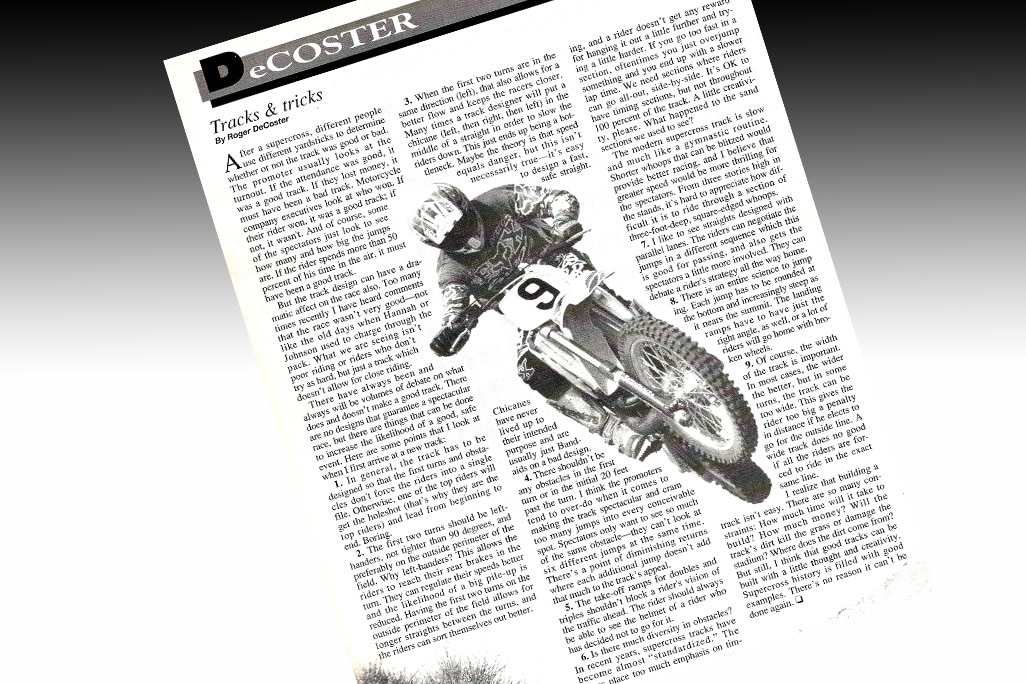 1. In general, the track has to be designed so that the first turns and obstacles don’t force the riders into a single file. Otherwise, one of the top riders will get the holeshot (that’s why they are the top riders) and lead from beginning to end. Boring.

2. The first two turns should be left-handers, not tighter than 90 degrees, and preferably on the outside perimeter of the field. Why left-handers? This allows the riders to reach their rear brakes in the turn. They can regulate their speeds better and the likelihood of a big pile-up is reduced. Having the first two turns on the outside perimeter of the field allows for longer straights between the turns, and the riders can sort themselves out better.

3. When the first two turns are in the same direction (left), that also allows for a better flow and keeps the racers closer. Many times a track designer will put a chicane (left, then right, then left) in the middle of a straight in order to slow the riders down. This just ends up being a bottleneck. Maybe the theory is that speed equals danger, but this isn’t necessarily true–it’s easy to design a fast, safe straight. Chicanes have never lived up to their intended purpose and are usually just Bandaids on a bad design.

4. There shouldn’t be any obstacles in the first turn or in the initial 20 feet past the turn. I think the promoters tend to over-do it when it comes to making the track spectacular and cram too many jumps into every conceivable spot. Spectators only want to see so much of the same obstacle–they can’t look at six different jumps at the same time. There’s a point of diminishing returns where each additional jump doesn’t add that much to the track’s appeal.

5. The take-off ramps for doubles and triples shouldn’t block a rider’s vision of the traffic ahead. The rider should always be able to see the helmet of a rider who has decided not to go for it.

6. Is there much diversity in obstacles? In recent years, supercross tracks have become almost “standardized.” The jumps place too much emphasis on timing, and a rider doesn’t get any reward for hanging it out a little further and trying a little harder. If you go too fast in a section, oftentimes you just overjump something and you end up with a slower lap time. We need sections where riders can go all-out, side-by-side. It’s OK to have timing sections, but not throughout 100 percent of the track. A little creativity, please. What happened to the sand sections we used to see?
The modern supercross track is slow and much like a gymnastic routine. Shorter whoops that can be blitzed would provide better racing, and I believe that greater speed would be more thrilling for the spectators. From three stories high in the stands, it’s hard to appreciate how difficult it is to ride through a section of three-foot-deep, square-edged whoops.

7. I like to see straights designed with parallel lanes. The riders can negotiate the jumps in a different sequence which is good for passing, and also gets the spectators a little more involved. They can debate a rider’s strategy all the way home.

8. There is an entire science to building a jump. Each jump has to be rounded at the bottom and increasingly steep as it nears the summit. The landing ramps have to have just the right angle, as well, or a lot of riders will go home with broken wheels.

9. Of course, the width of the track is important. In most cases, the wider the better, but in some turns, the track can be too wide. This gives the rider too big a penalty in distance if he elects to go for the outside line. A wide track does no good if all the riders are forced to ride in the exact same line.

I realize that building a track isn’t easy. There are so many constraints: How much time will it take to build? How much money? Will the track’s dirt kill the grass or damage the stadium? Where does the dirt come from? But still, I think that good tracks can be built with a little thought and creativity. Supercross history is filled with good examples. There’s no reason it can’t be done again. 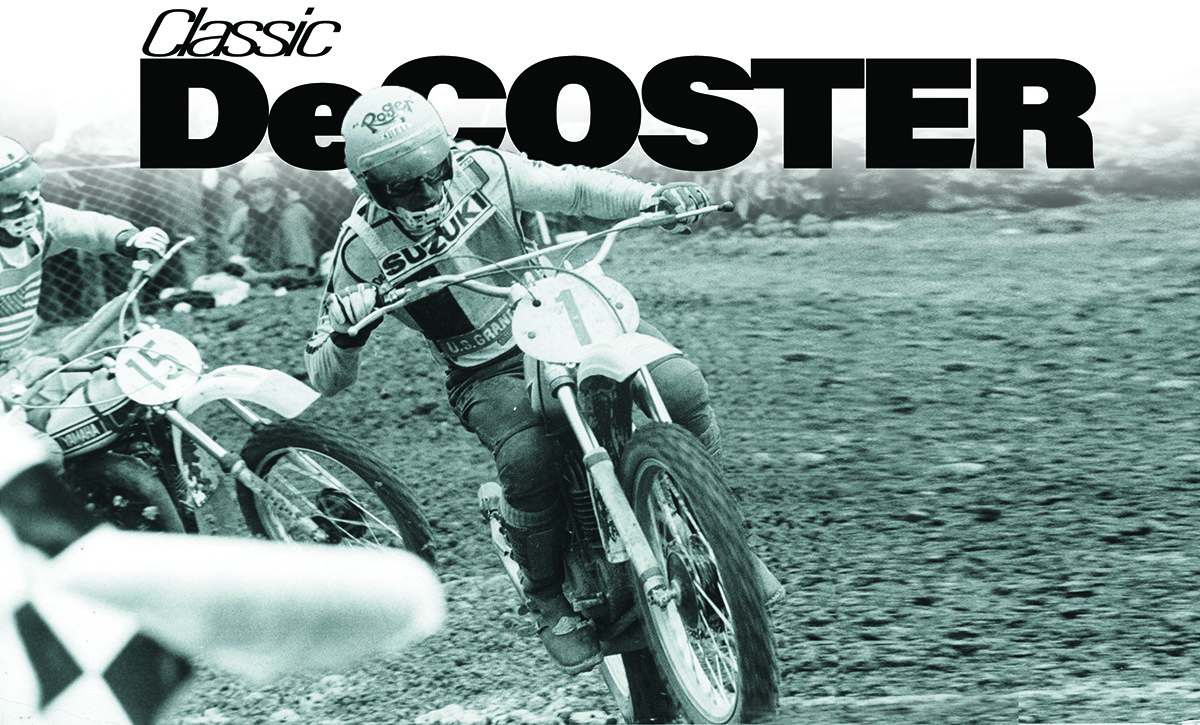