WHAT IS DIRTY RACING? CLASSIC DECOSTER

What’s the difference between a legitimate pass and dirty racing? That’s been a difficult question for a very long time. In the June, 1994 issue of Dirt Bike, Roger DeCoster addressed the issue. The standards he put forth have become a benchmark that has lasted to this day. Here’s what he said:

Since the very first race in history, one question has come up time and time again. Each time the question is asked, it’s accompanied by accusations, penalties, fines and controversy, and chances are it will continue to be as long as racing remains an activity that generates winners and losers. The question: What is dirty racing?

The question bubbled to the surface at the 1994 San Diego Supercross, where Mike LaRocco and Jeff Emig were the players. LaRocco tried to get inside of Emig where there wasn’t enough room, and both of them ended up on the ground. Emig was furious; he jumped up and kicked LaRocco before the Kawasaki rider had enough time to get up. The result was that Emig was fined and placed on probation (whatever that means). The AMA said that Emig’s conduct was unsportsmanlike (it was). Emig probably would have said that LaRocco’s pass attempt was unsportsmanlike. It’s very difficult to define dirty racing.

When you have 25 riders on the start line and all of them want to do well at the finish–in fact, most of their paychecks depend on it–the threshold of what riders will do (and expect other riders to do) can change. Many times something that the average spectator would think of as a dirty move really is nothing of the sort. If one rider takes the outside line, and another goes from the inside to the outside for a block pass, well, that’s normal racing. The rider who went outside left an opening, and he should have expected the other rider to take advantage of it.

Where I draw the line is based on danger. If riders bump bars in a slow turn it’s no big deal. However, if a rider launches off a double jump on the left side of the track, crosses in the air and lands on the right side, that’s scary. The rider behind him might have a better drive off the face of the jump, and the two could collide at high speed and at high altitude. Your brakes don’t work very well when you’re 20 feet in the air. Because of the nature of the modern Supercross track, you see this kind of incident taking place, or nearly taking place, all the time. Slower riders will get a good start and try to block other riders by doing all kinds of crazy things. I don’t like seeing a race where riders are all bunched up behind a rider everyone is afraid to pass; I don’t think it makes for a very good show. Even when it’s not life-threatening, it leaves a negative impression of the sport.

Until today, very few fines have been given to the true culprits. Emig’s kick might have been unsportsmanlike and might well have deserved a fine, but it didn’t endanger anyone’s life. There are much more serious offenses that routinely go unnoticed. The problem is that it’s easy to identify something like that kick, but difficult to differentiate between hard racing and dangerous racing. Perhaps officials fear that it will take something away from the show if they penalize dirty moves. I think just the opposite will be the case. Once riders are confident that dangerous moves, such as the example of the rider crossing from left to right in the air, won’t be permitted, then we will see closer racing and more passing. Some contact is a necessary part of good racing-it’s actually a good thing for the sport-but riders know what is kosher and what isn’t. There are some things that everyone can do to keep the sport from degenerating into Wrestlemania: 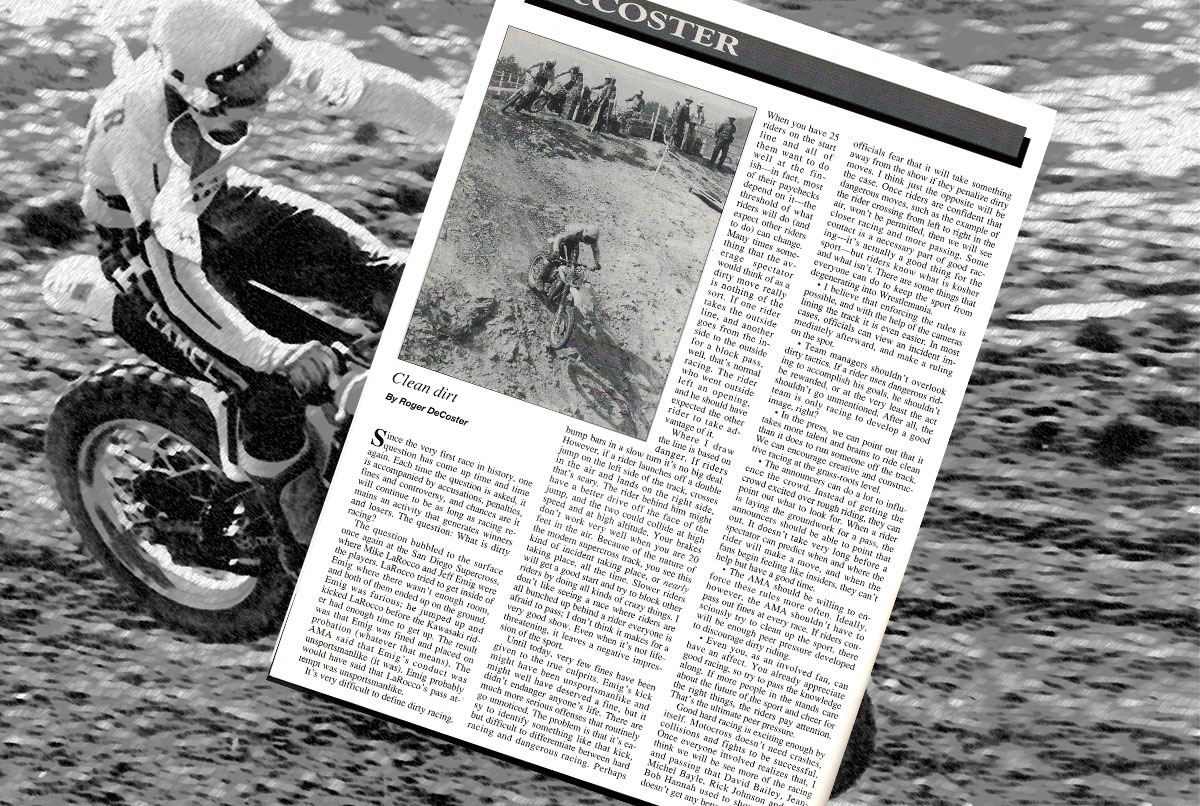