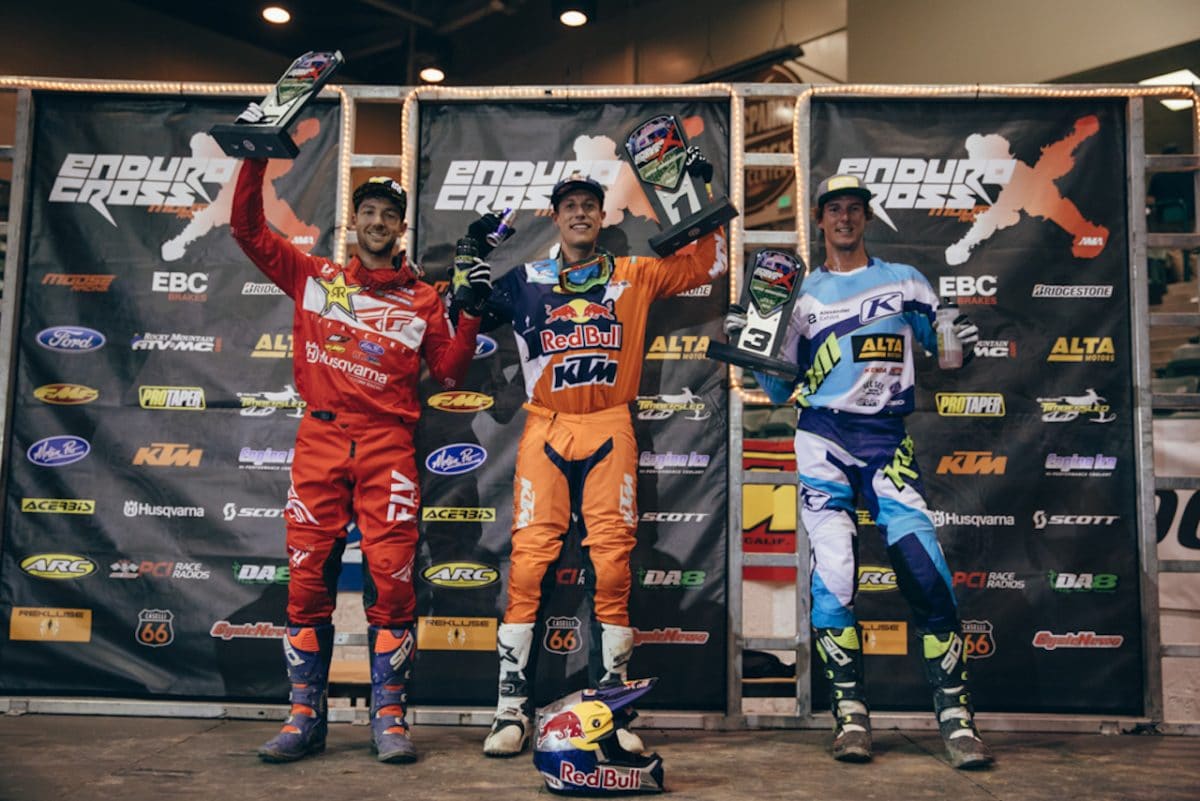 Haaker started the day strong by edging out Webb for the fastest hot lap time. SRT-Husqvarna’s Kyle Redmond set the third fastest time with his teammate, Trystan Hart, fourth. Cooper Abbott rounded out the top five on the RPM KTM.

Haaker dominated the first of the two pro class heat races but forgot to take the No Joke Lane and, therefore, had to go to the Last Chance Qualifier instead of the main event. GasGas backed Noah Kepple moved up to take the heat one win, the first of his career. Redmond, Ty Cullins, Cristobal Guerrero, Abbott and Ryan Wells finished second to sixth respectively to earn main event spots.

In the second pro heat race, Webb took the win over Tremaine. Dustin McCarthy, Geoff Aaron, Giacomo Redondi and Mason Ottersberg finished third through sixth respectively to earn slots in the main event. Trystan Hart crashed out of the night with a hard fall in the heat while running 3rd.

The top four riders from each of the above heat races faced off in head-to-head bracket races. The winner earns a bonus point and first gate pick for the main event. With the points leader Haaker not in the brackets, it was Webb’s opportunity to gain a point. But Tremaine, who is from nearby Gardnerville, Nevada managed to beat Webb when they faced off in the final.

Cody Webb
“Reno was much better than last weekend. With the injury earlier in the year, I was behind and trying to rely on talent and that wasn’t enough. So I spent all week with Trystan Hart, Cooper Abbott, and Cody Miller riding motos to get my intensity back and that helped. I hope Trystan is okay since he was riding so good, so it is a bummer to see him hurt his wrist or arm.”

Colton Haaker
“The mistake I made in the heat race (missing the No Joke Lane), it was easy tonight and I was so focused on the track that I just forgot to hit it. In the main, I got an okay start and got to second pretty quick and tried to close on Cody. He was so good in the Matrix and jumping into the rocks that he was putting a couple of seconds on me there. I think I was making up time on the rest of the track but not enough.”

Ty Tremaine
“I didn’t get the best start so I took the No Joke Lane right away, and then from there, I just started picking guys off one by one. I got into third and then rode my own race. We made history tonight with the Alta, which is crazy. And I did it with all of my family and hometown crowd here, which was so great.

Visit www.endurocross.com for more information and the latest news.