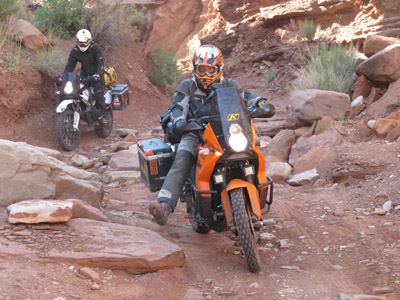 Share FacebookTwitterGoogle+ReddItWhatsAppPinterestEmail
The guys at, Backcountry Discovery Routes have created an option for you to consider if you want to explore one of the most unique places in the US.

The Utah Backcountry Discovery Route (UTBDR) is an 871 mile off-road route that starts in Mexican Hat, UT and runs north across the state to the Idaho border near Bear Lake. The UTBDR passes through a number of iconic locations including Moab, Valley of the Gods, the Abajo and La Sal Mountain Ranges, Nine Mile Canyon and the northern Wasatch Mountains. The route follows many low usage roads that wind through a number of mountain ranges and valleys, with a cumulative elevation gain of 86,996 feet. The film, which will be released as a feature-length documentary DVD in early 2012, is being produced by Joe and Flora Lloyd of Curbsyde Productions and will be distributed by Noren Films.
Share FacebookTwitterGoogle+ReddItWhatsAppPinterestEmail

LIFE AND TIMES OF THE HONDA CR250R