UP CLOSE WITH MAX VOHLAND’S FACTORY KTM 250SX-F: THE WRAP 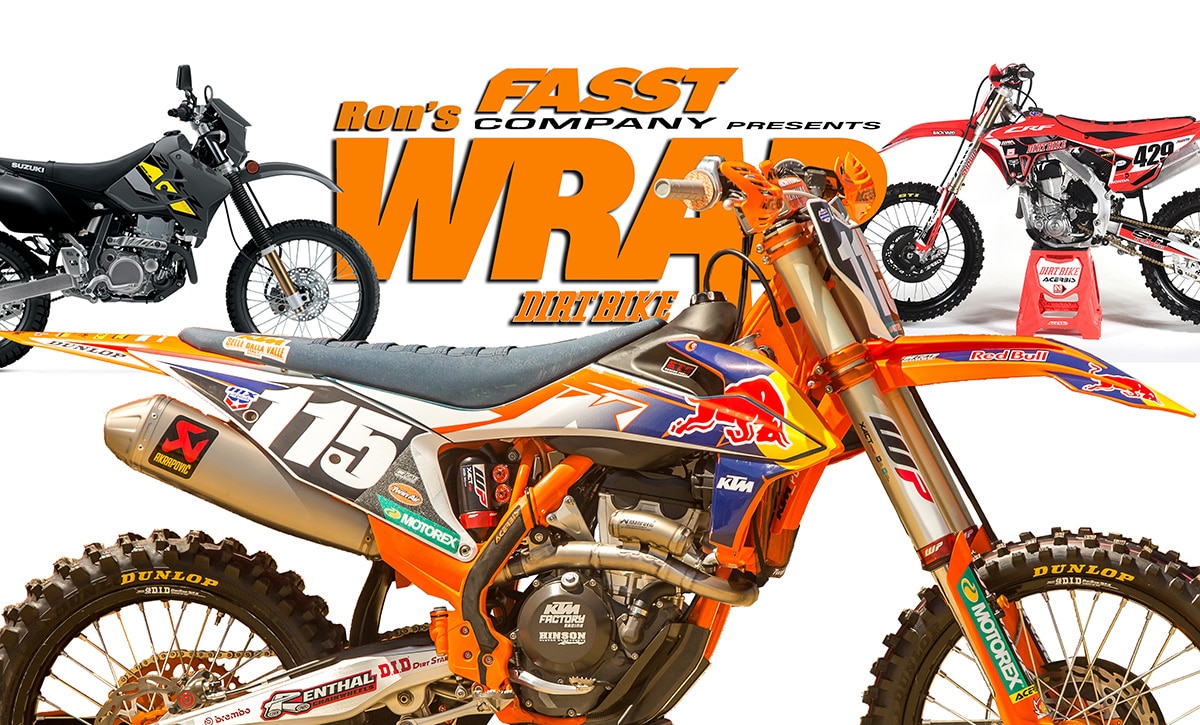 In 2020, KTM’s in-house motocross and Supercross racing program was limited to the 450 class, while Troy Lee handled the 250 team. That all changed when Troy Lee took over the GasGas team for 2021. That meant KTM brought its 250 racing program in-house for Max Vohland. Max had been brought up in the KTM Orange Brigade amateur program. The last time that Red Bull KTM had a 250 program in the U.S. was with Marvin Musquin and Justin Hill in 2015.

KTM isn’t completely unfamiliar with its own 250. KTM Factory Services has been building 250 motors for a long time, and if you look at Europe, Red Bull Factory Racing has won the MX2 championship every year since 2016. Travis Fant got together with the KTM team earlier in the year and got to go over every detail of Vohland’s bike. 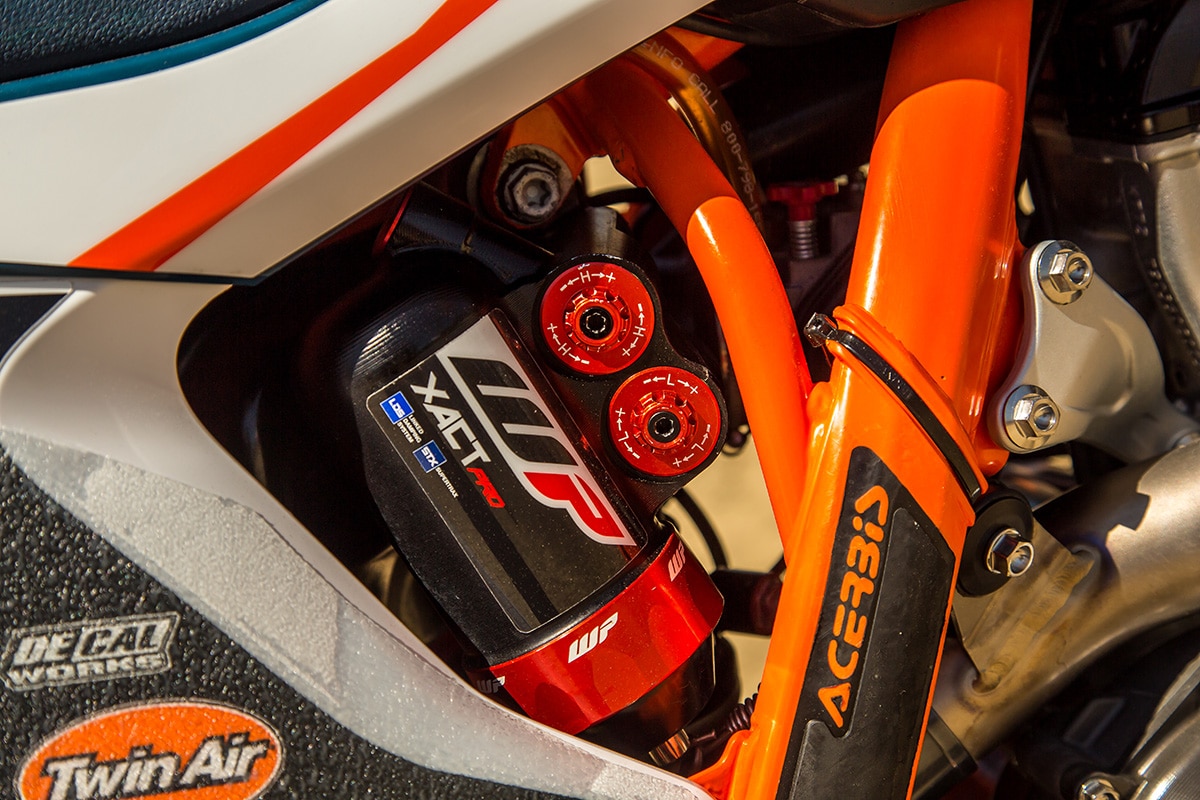 The factory WP suspension has a 51mm fork with coil springs in front and a factory shock in the rear. There has been a great deal of in-house testing with an air shock. Like all of the Red Bull KTM bikes, the pipe is an Akrapovic, the brakes are factory Brembo and the clutch is Hinson. No surprises there. It got a little more interesting when Travis got into the intricate details of Max’s set up. For example, Max is running a GPS on the handlebar to collect telemetry data. Rumor has it that KTM is developing this for production bikes, as well. Max gets Marvin Musquin’s hand-me-down seats. He likes them softer and half worn-out. He’s also one of the only 250s that runs a Dunlop scoop tire.

Keeping the motor cool in this summer’s heat has been important. The factory bikes use 2.0 kPa radiator caps and, if you look closely, you can see that this bike has a radiator fan. It was made by Carlos Rivera (Cooper Webb’s mechanic) and runs off a separate battery under the seat. There’s an extra frame guard under the radiator shrouds so Max doesn’t break the plastic when he grips the bike with his knees. There’s a lot of titanium on the bike, too. The axle blocks are made by none other than Roger DeCoster himself. He likes making metal chips for therapy.

Unlike the 450, there’s isn’t much in the way of frame reinforcing. The engine hangars are stock. The 450 has had an extra frame member welded in place to make the chassis stiffer since 2019. In the last two Outdoor Nationals, Webb had this taken out with good results. Justin Barcia still uses it on the GasGas 450.

Max’s dad Tallon Vohland is a former National and GP rider who currently works for Acerbis. Not surprisingly, there are a number of Acerbis products on Max’s bike. He likes handguards, and the frame guards are shaved down for more grip. For more of Travis Fant’s up-close reports on factory bikes, click here. 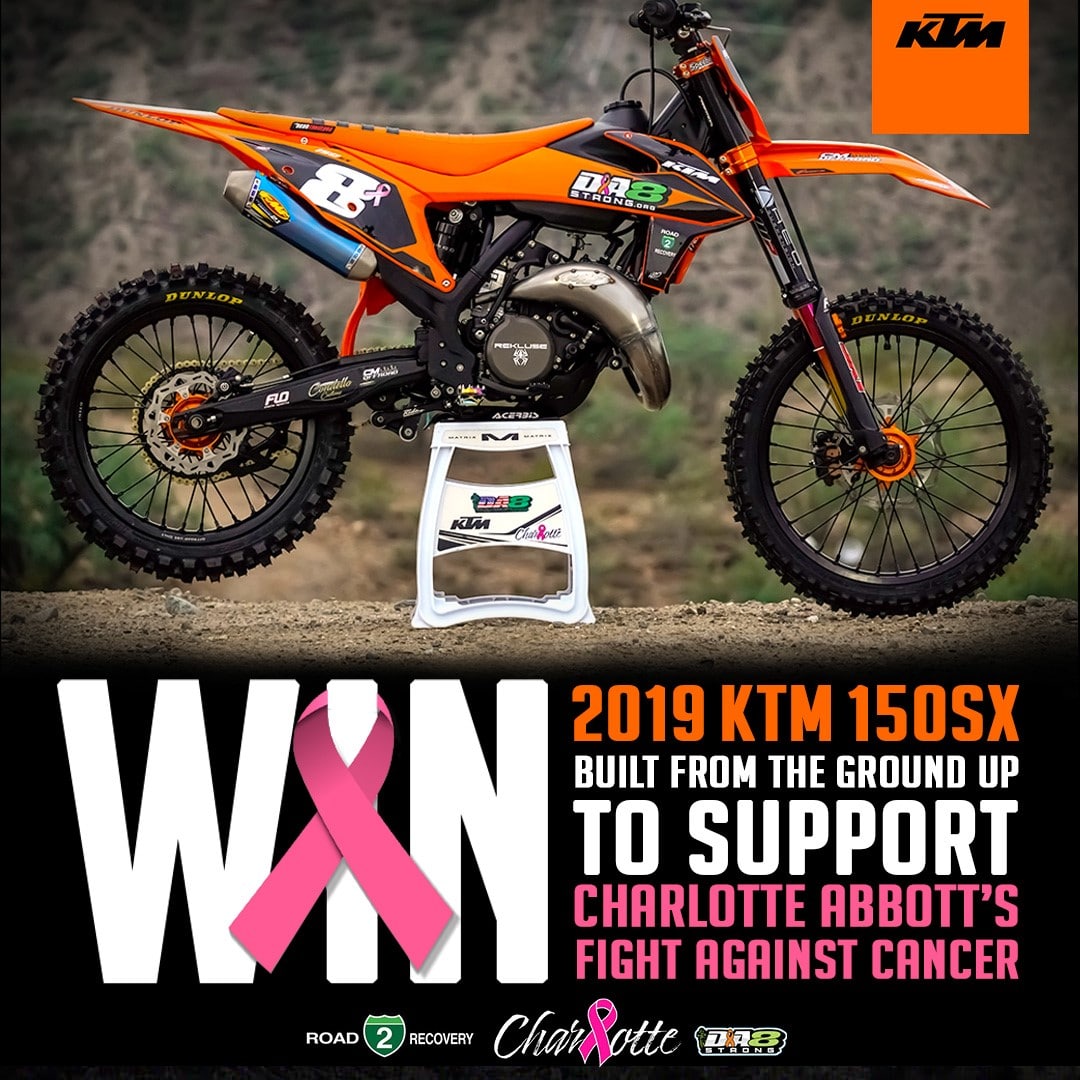 Hi Everyone,
I wanted to give you an update regarding how my wife Charlotte is doing and also ask for a favor. As most of you know, Charlotte’s breast cancer has returned and this time has spread to her bones. In addition, she broke her back due to brittle bones not long after her diagnoses. It’s now been 5-months since her accident, and a little less than that since starting her chemo treatments. She’s currently doing a lot better with her back, and has relearned to walk and can now take care of herself which is awesome! She finished her main chemo treatment, but the cancer hasn’t fully disappeared so they’re keeping her on a three week maintenance cycle to see if that helps. Unfortunately she wasn’t able to complete her last treatment due to results from her last echocardiogram, so now she’s having to see a cardiologist to make sure her heart is able to handle the treatment before we move forward.

The good news is we have her scheduled to go to MD Anderson in Houston, Texas at the end of October for a second opinion and she’s staying positive and working towards rebuilding her strength. This is where I went for my treatments and we feel it’s the best place to go in the world! They have a lot of trials and advanced medicine that can possibly help her out. Of course, we’ve also had an amazing support system and we are so overwhelmed and thankful to everyone that has stepped up in so many ways to help. Our kids and family have gone above and beyond to help take care of her during this time. We’ve had amazing close friends such as Cody Miller (from CM Offroad), who surprised us by donating and building up a KTM 150 from the ground up with help from the sponsors listed below specifically for the purpose of raffling it off to help raise funds for the battle we have in front of us. Road2Recovery is taking care of the logistics for the raffle and helping make a push to the community for us.

So our ask of you is if you would be able to share the info regarding this raffle to help raise money for bills and traveling expenses that would mean so much to our family! We’re not the type of people to ask for anything, but we have some tough times ahead and could really use the help.

The bike will also be on display at the final AMA National Motocross in Hangtown this weekend at the Road2Recovery tent. Huge thank you to them for stepping up and taking care of all of this for us!

We got a chance to ride the SLR Honda 1x bike that will go to the Baja 1000 in November. It wasn’t too hard, because Justin Jones has been a  member of the Baja-1000 winning team for several years, and Justin is also a Dirt Bike test rider. The bike is interesting because somehow it fits Mark Samuels, Justin Morgan and Justin Jones, who are completely different shapes and have different riding styles. Overall, the bike is cushy and comfortable, which is what you want for a bike that you cross whole continents on. It started off as a Honda CRF450X, which is a green-sticker bike, but the guys at San Diego Powerhouse transformed the motor into a beast. Check out the December, 2021 print edition of Dirt Bike for a full report. 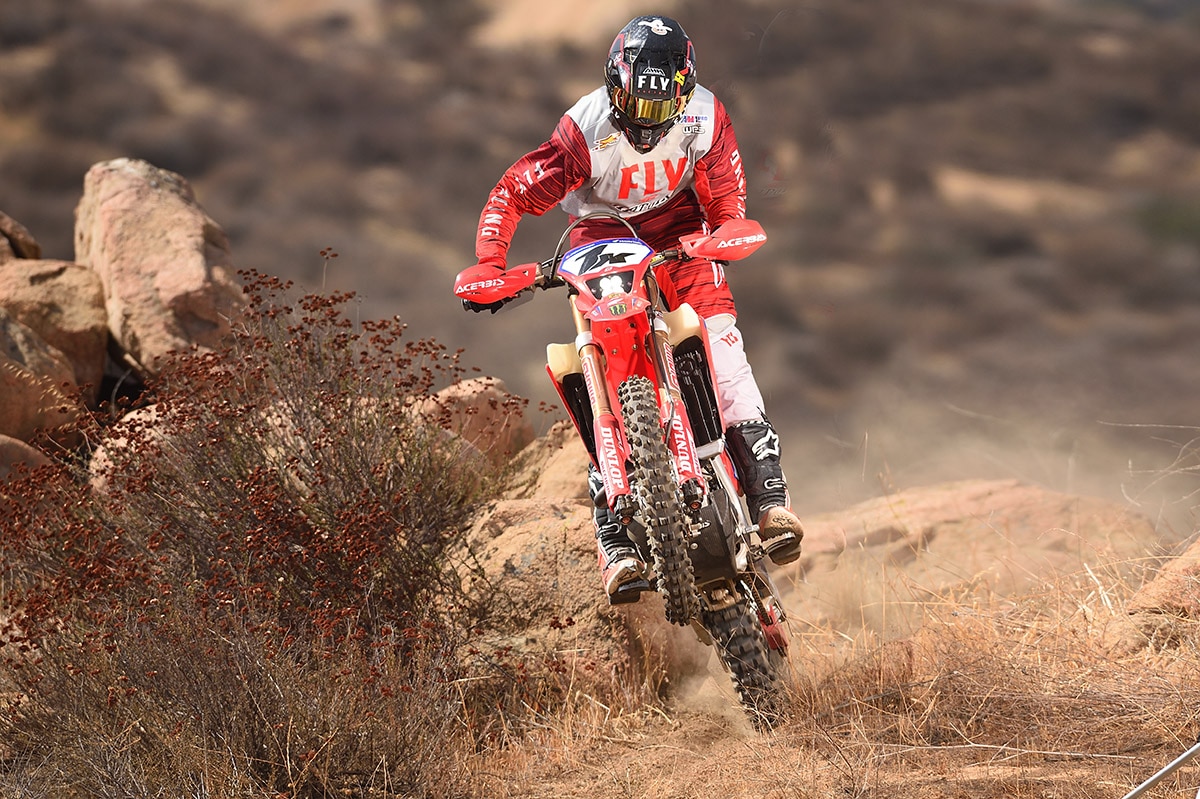 Speaking of Justin Jones, he had a very busy week. Just before riding the 1x bike for my photoshoot, he rode the penultimate round of the Lucas Oil Pro Motocross Series on our 2022 Honda CRF450R test bike.

The bike was box stock aside from suspension that was revalved by AHM, a Hinson clutch, STI tires and a tall seat. He got into the program and finished 27th. That’s a pretty impressive testimony as to how good modern motocross bikes are.

Suzuki is keeping a low profile recently, but there’s no truth to the rumor that the company is pulling out of the motorcycle market in the U.S. Thank goodness! Two of the all-time great dual-sport bikes have been announced as 2022 models. The Suzuki DR650S
will have an MSRP of $6849. And the Suzuki DR-Z400S will sell for $6999. 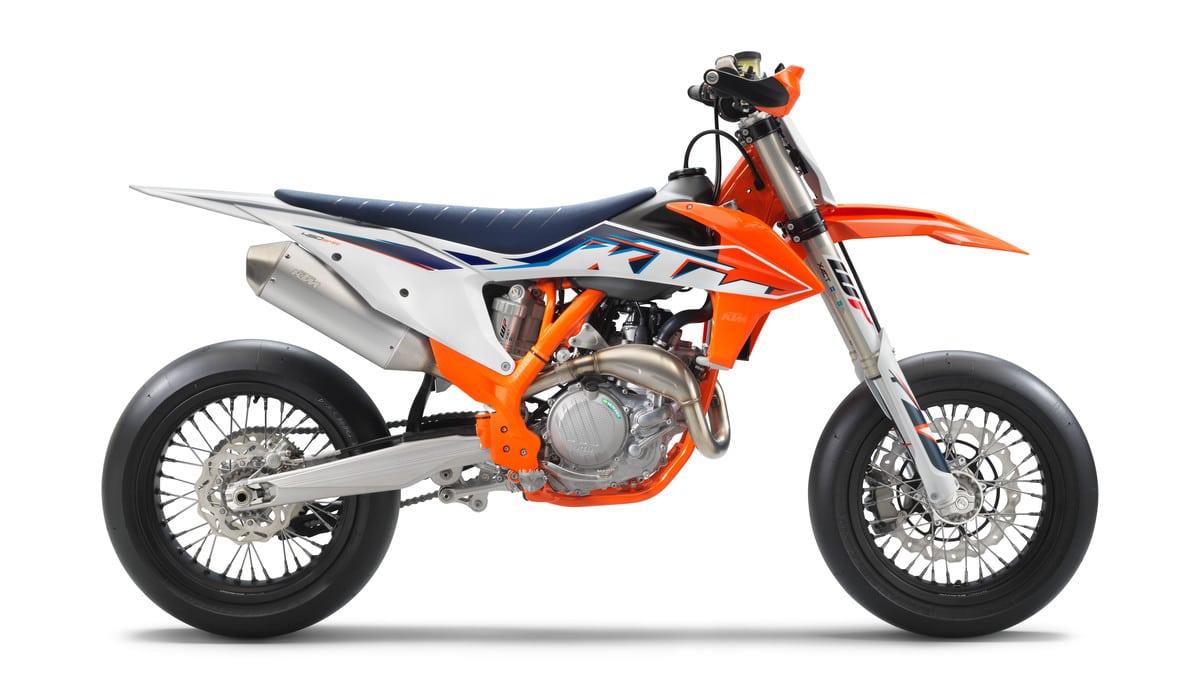 At the other end of the spectrum is the 2022 KTM 450SMR Supermoto bike, which was just announced. Here’s what KTM says about it:

Back in 2019, Mark Tilley, Jason Weigandt and I hosted the MAV TV production of the Prairie Dog Last Dog Standing Extreme Enduro. The show came out pretty good! It’s happening again for the 2021 running of the event, so stay tuned.