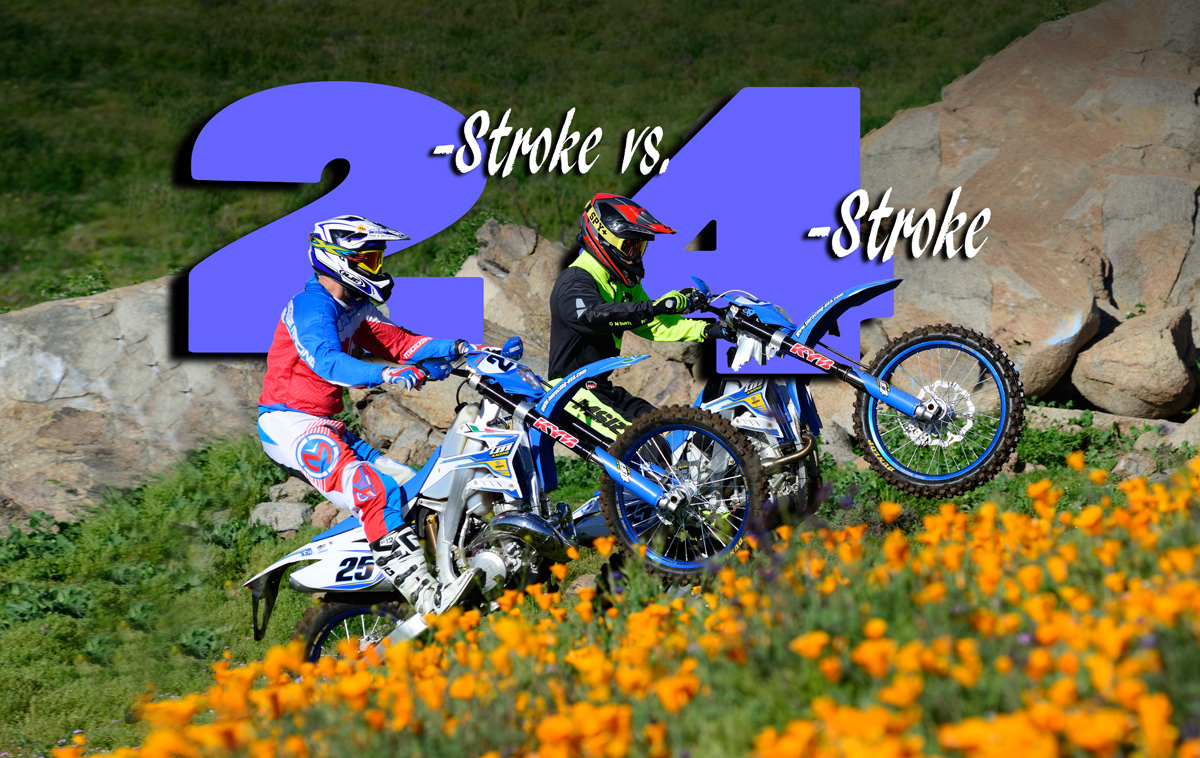 For 2017 an Italian company gives you a choice in 300cc off-road bikes. TM offers a carbureted two-stroke or an EFI four-stroke. In Europe, these two bikes might go into different classes, but that’s just an accident of rule-making. Bikes around this engine size have won most off-road championships worldwide for years, regardless of class, brand or engine type. These two bikes represent the best of their respective worlds. 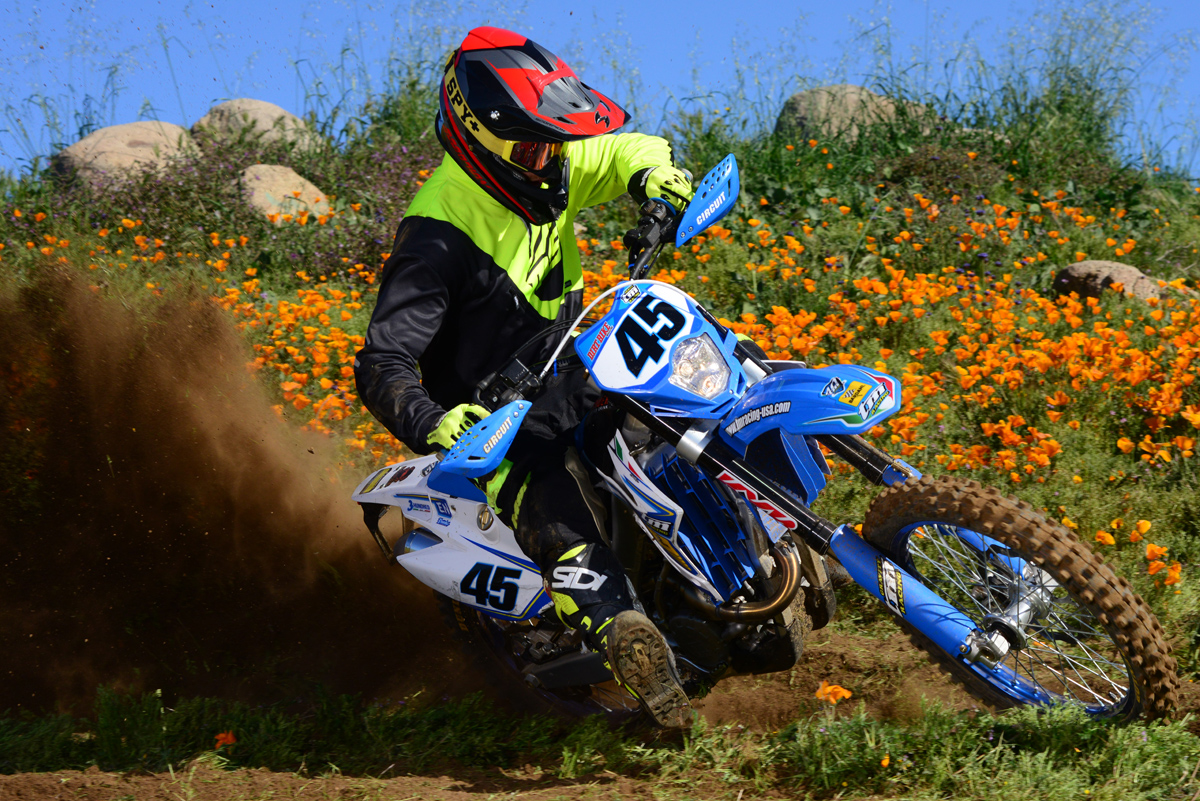 TM WHO?
We forgive you if you don’t know TM. It is a small Italian firm that builds motorcycles in very limited quantity, trying to capitalize on craftsmanship over name recognition. In Europe, everyone knows about TM simply because of its racing success. The current 250 world champion is Finnish rider Eero Remes, who races a TM EN 250 FI, very similar to the 300 four-stroke tested here. The company started out making kart motors, then moved into two-stroke enduro bikes. Four-strokes came later. One of the most impressive aspects of the tiny firm is how many proprietary components it manufactures. Not only are the engine and frame made in-house, but so are many of the bits and pieces. Even the rear shock is made by TM. The parts that aren’t made by TM are high quality and, oddly enough, many are Japanese. The fork is a Kayaba SSS, similar to what comes on a Yamaha. The brakes are Nissin. The rims are Takasago Excels, and the EFI hardware on the four-stroke is Keihin. The carb on the two-stroke is also Keihin, and it’s paired with a Moto Tassinari reed. The bikes sold in the U.S. come with Dunlop tires.
The 300cc two-stroke has been the most popular model in the U.S. since it was introduced in the 1990s. It’s changed gradually since then, getting an electronic power valve a few years ago. The 250cc four-stroke has been around for almost 10 years, and this year TM increased both the bore and the stroke to make the 300cc four-stroke. You might assume that all TMs have the same frame, regardless of the motor, but that’s not the case. These two have very similar geometries, but the airbox and the fuel tank have traded places on the four-stroke, much like a Yamaha. Air is drawn in up high, and the throttle body is situated above the head, making for a very straight shot into the combustion chamber. The fuel tank is in the subframe, causing slight changes to the shock position as compared with the two-stroke.
There are two other major differences that you might not expect. The four-stroke has electric start and a six-speed gearbox. The two-stroke is kick-start only and has a five-speed. Despite this, the two-stroke is only a pound lighter. It weighs 231 pounds without fuel, whereas the four-stroke is 232 pounds. By the time you fill them both up, the two-stroke is a pound heavier because it holds more gas (2.5 gallons versus 2.0). 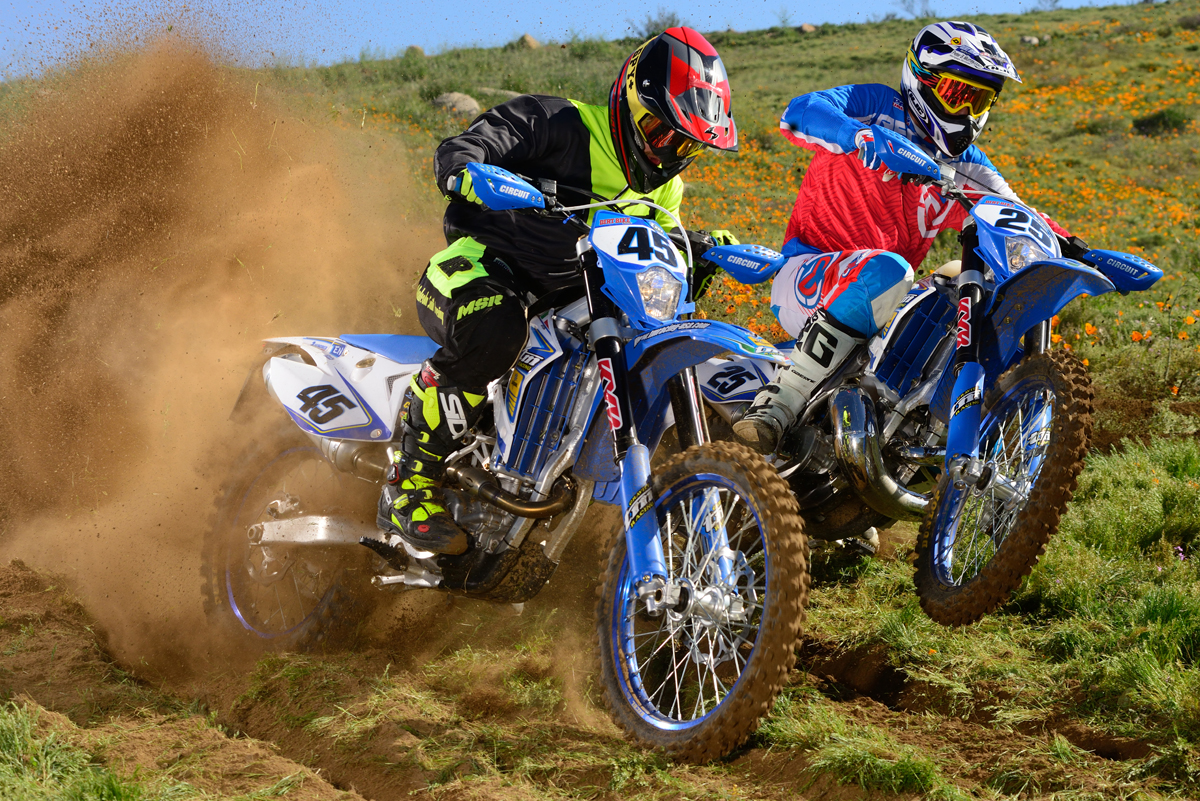 THE TRUTH OF THE TRAIL
Don’t be too confused by the weight figures. Four-stroke weight numbers have dropped dramatically in recent years, and the 300 two-stroke was designed earlier. The real difference is how they feel when you ride them. The two-stroke feels much lighter. It’s easier to throw around and manhandle. There are gyroscopic laws that work on the larger crank and additional spinning shafts in the four-stroke that affect the handling in a big way. If you want to win a lot of bets, have people ride these two bikes, then guess which is the heaviest. You might have to bring a certified scale to the track to prove yourself.
Oddly enough, the same factors that make the four-stroke feel heavier make it handle better at speed. It’s more stable. In rough terrain, in particular, the four-stroke goes straighter and is less likely to be thrown off course by square edges, holes or whoops. Once again, your seat-of-the-pants riding impression would probably lead you astray. You would never believe that the two bikes have the same suspension components. The four-stroke feels cushier and more well rounded. Both bikes have great suspension, particularly in front, but the four-stroke just delivers a smoother, more comfortable ride. The two-stroke’s forward progress is easily interrupted by bumps and holes, and that has a negative effect on traction.

THE MAIN EVENT
All that is interesting but not very surprising. We’ve long documented the handling differences created by the two methods of propulsion. The big difference is power. Conventional wisdom has always held that two-strokes make more power per cubic inch, and that’s why it was considered “fair” to give four-strokes a displacement advantage in racing.
Is it still justified? Not really. In terms of peak power, these two bikes are very close. In power delivery, they are nothing alike. The two bikes put their power to the ground in such dramatically different ways that they defeat all our usual methods of comparing acceleration. In a full-race start, traction presents a random element that makes results inconsistent. The four-stroke usually hooks up better, but not always, and rider skill plays a bigger role on the two-stroke. The time-honored roll-on test, which we usually perform on pavement, eliminates traction and rider skill as variables, but rpm plays a bigger role. If you open both throttles at the same time from a slow-rolling start in, say, third gear, you should get a good picture of how they differ. In this case, the two-stroke walks away easily when the comparison is done starting at low rpm. When the roll-on test starts from a faster pace, the two-stroke has to shift immediately, and the four-stroke seizes that advantage to pull away.
The bottom line is that you ride these two bikes differently. The two-stroke is all about low revs and growling through obstacles. It’s virtually unstoppable. The bike doesn’t stall or hesitate, even if you’re in a gear that’s far too tall and you have to suddenly accelerate to clear a log or wheelie over a ditch. The four-stroke’s power, on the other hand, is very soft down low. If the trail suddenly turns upward, you can’t just open the throttle and expect good results. The bike wants to downshift. All the four-stroke’s power is way up high, so it works best if you rev it. The powerband is actually very long, going from about 6000 rpm all the way up to somewhere in the 13,000 zone. But, if you put the engine under a sudden load when it’s not ready, it groans and complains. Even the automatic decompressor makes noise, joining a chorus of unhappy traits. The solution is to be aggressive. The four-stroke wants you to be riding hard and fast all the time. When you do that, it flies up hills, hooks up in mud and pulls through sand. It’s an aggressive race bike, and it wants aggressive riders. 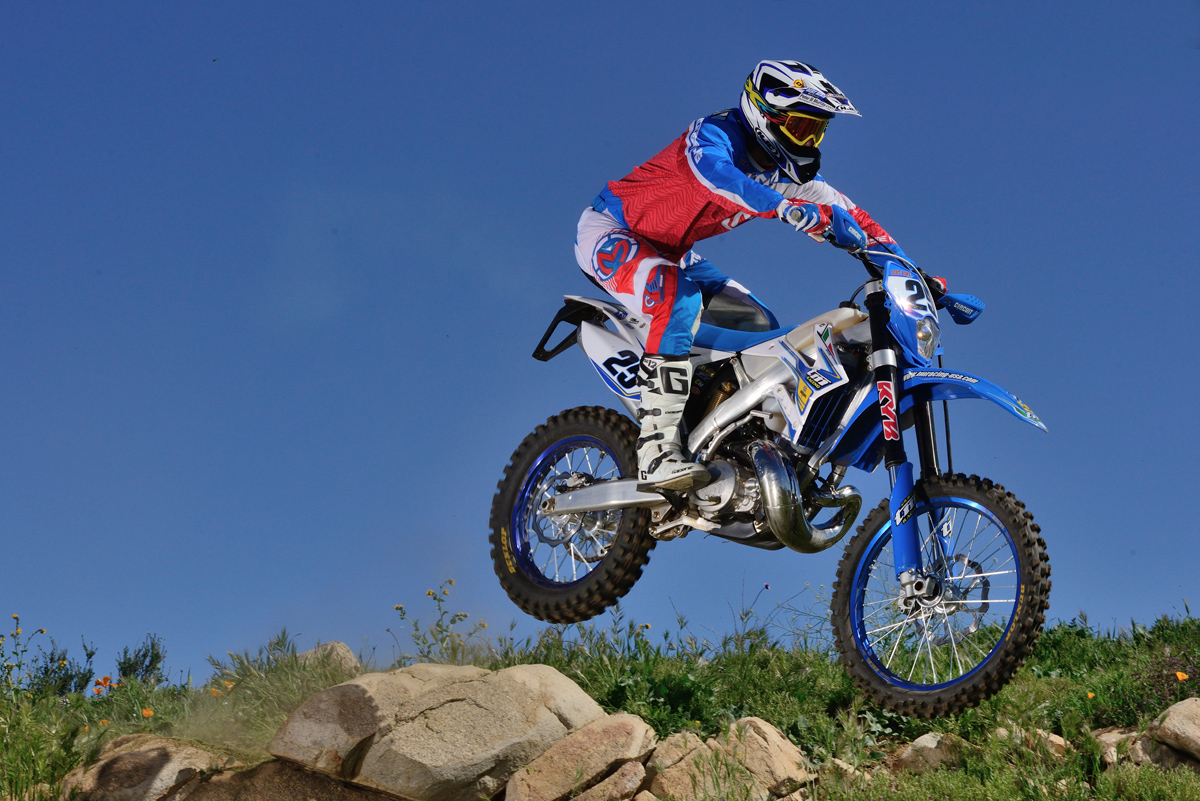 QUIRK REPORT
Putting the wheel-to-wheel comparison aside for the moment, there are certain things that should be said about TM motorcycles. The quality is outstanding on both bikes. You can take a magnifying glass to the welds on the frame and you’ll never find a flaw. The finishes on the triple clamps, the rear brake pedal and even the fasteners are all NASA quality. And, as you might expect, the bikes are quirky. They make odd sounds and have unusual tendencies. For example, there’s a lot of intake noise on the four-stroke. The two-stroke vibrates its nuts and bolts loose on a regular basis. Both hydraulic clutches have a jerky pull, and the kill buttons are located where brush could cause a temporary interruption in progress. These aren’t mass-manufactured motorcycles and aren’t supposed to appeal to the hose-it-off-and-forget-it generation.
That’s why we think the 300 two-stroke will continue to be the company’s calling card for years to come. It’s easier to ride and appeals to older riders who might consider an off-beat brand like TM. There’s no doubt that the four-stroke is a better racer. Eero Remes probably could ride anything the company makes, but he sticks with the four-stroke because he has the skill, the drive and the aggressiveness to make it work for him. As for us, we just want to have fun riding dirt bikes. And, as we’ve always known, there’s nothing more fun than a 300cc two-stroke. o