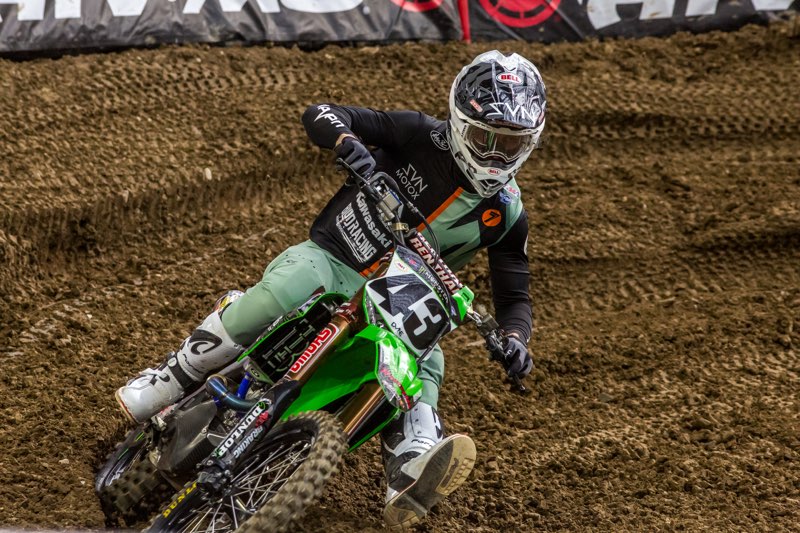 Tyler Bowers released the following statement on his social media in response to his incident during a heat race with Justin Barcia:

“First off, I would like to apologize for what happened last night to my team and fans. What I am about to say doesn’t excuse my actions entirely, but it will hopefully shed some light on what I feel is a lack of consistency by officials that are supposed to handle these matters. I have been no angel in the past, but I have been overly cautious over the last few years to stay out of issues and not step on any toes. I believe aggressive racing is what makes this sport what is at it’s core, I’ve also dished it so I have to be able to take it at times, as well. However, there is a line and we all know as professional racers when it has been crossed. What I tried to do last night was to offer aggressive racing; just as I have received in the past. Instead of lying down and taking it, I gave it back. Unfortunately, it caused both of us to go down.

While I feel the penalty to be extreme, I don’t 100% disagree with the AMA or FIM (specifically John Gallagher’s)decision. The real problem I have is with the lack of CONSISTENCY in which these multiple sanctioning bodies base their decisions upon in types of matters. There have already been numerous incidents brought to the officials’ attention by myself and other racers regarding Justin Barcia’s over the top, aggressive racing tactics. For example, I am 200lbs, I don’t move that easy when you hit me. I don’t always go down-even with enough force to fracture my fibula, tear out spokes, put holes in swingarm, bend rotor and brake hangers. If I am hit hard enough to cause bodily harm, I can sometimes take it being a heavier guy. Just because I didn’t fall over, it doesn’t mean it wasn’t served with ill intent. In the past, the AMA and FIM have done nothing to intervene with said rider when I and/or other riders have brought it to their attention.

These organizations are supposed to be in place to properly handle matters of this nature. Suddenly, they want to use me as an ‘example’ to enforce a penalty for something that went unpunished before. I told Mr. Gallagher in Oakland this year “If you don’t do your job, then you will have the ‘Wild West’ out there. Do your job sir.”

When I was approached last night, I was barely able to defend myself because I was being interrupted the whole time by an official who has never swung a leg over a bike in professional racing. It bothers me that this official, who is in the position of power, emotionally argued facts that I witnessed happening on the race track; facts that he could have no clue about (such as: revving, screaming, cross jumping in a rhythm lane-all before the camera could catch what happened in the corner). If he had been been a police officer behind a gun, he would have been tumbling with fear and anger as he pulled the trigger on a hasty decision, before he even made any kind of rational attempt to communicate with me or my team.

There are too many past coincidental examples where no disciplinary actions were taken. Recently, the most comparable instance happened moments after my penalty was handed out. I’m sorry Mitchell Oldenburg, but I am going to use you as an example. In the exact same corner, the exact same action unfolded moments after my penalty was handed out. Yet no ramifications? Where is the CONSISTENCY! #doyourjob

For the record, I don’t believe this has anything to do with the recent lime incident or with what myself and other riders/teams are trying to accomplish with the promoters of Supercross. We have opened a better communication between all parties involved, and will continue to meet each weekend to improve operations and keep one another better informed. I think by continuing these meetings, issues like this will only improve so long as everyone can share their point of view and we can better understand each other (even if we don’t always agree while working together.) “