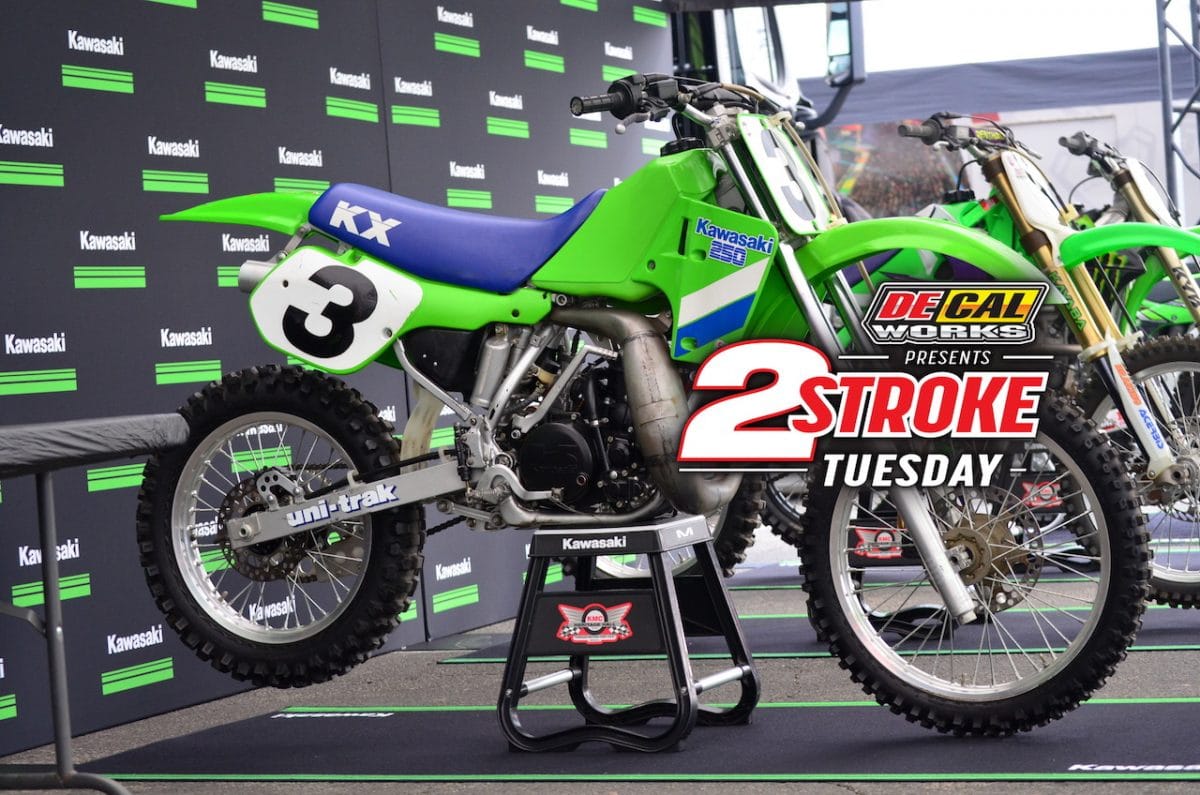 On this week’s Two-Stroke Tuesday brought to you by Decal Works, we take a look back at legendary rider Jeff Ward’s factory Kawasaki KX250SR. Don’t miss the iconic Supercross footage battles between “Wardy” and the “Bad Boy” himself, Rick Johnson, 1987 was a rollercoaster season for both riders. Check out the exclusive link to our 2004 CR250R rebuild at the bottom of this page. 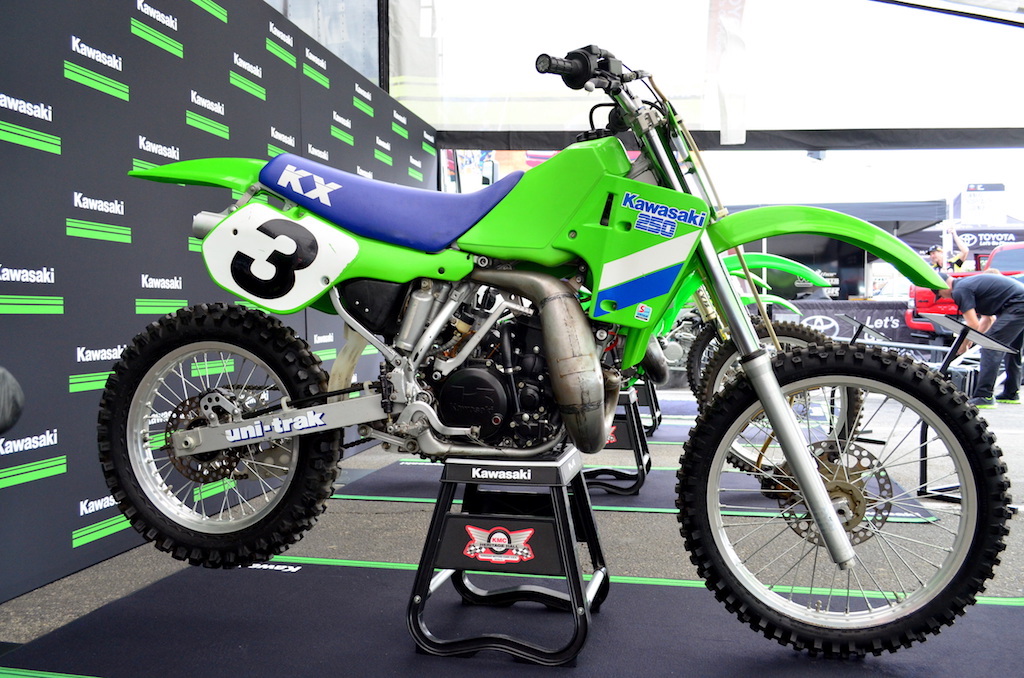 Jeff Ward’s second AMA 250cc Supercross Championship was won on this KX250SR in 1987 using the number 3. Ward and Honda’s Rick Johnson were involved in a very heated battle for the championship. Jeff would eventually prevail over the heavily favored Honda rider. 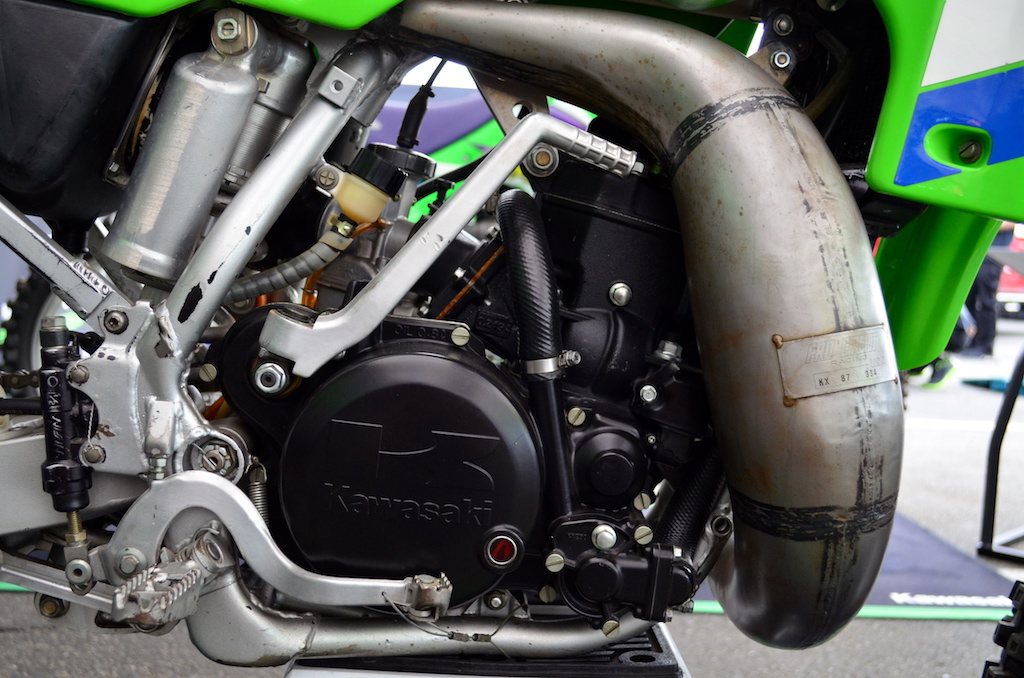 The bike was based off the production KX model but featured a ton of Kawasaki Motor Corp factory specs internally and check out that classic Pro Circuit pipe. 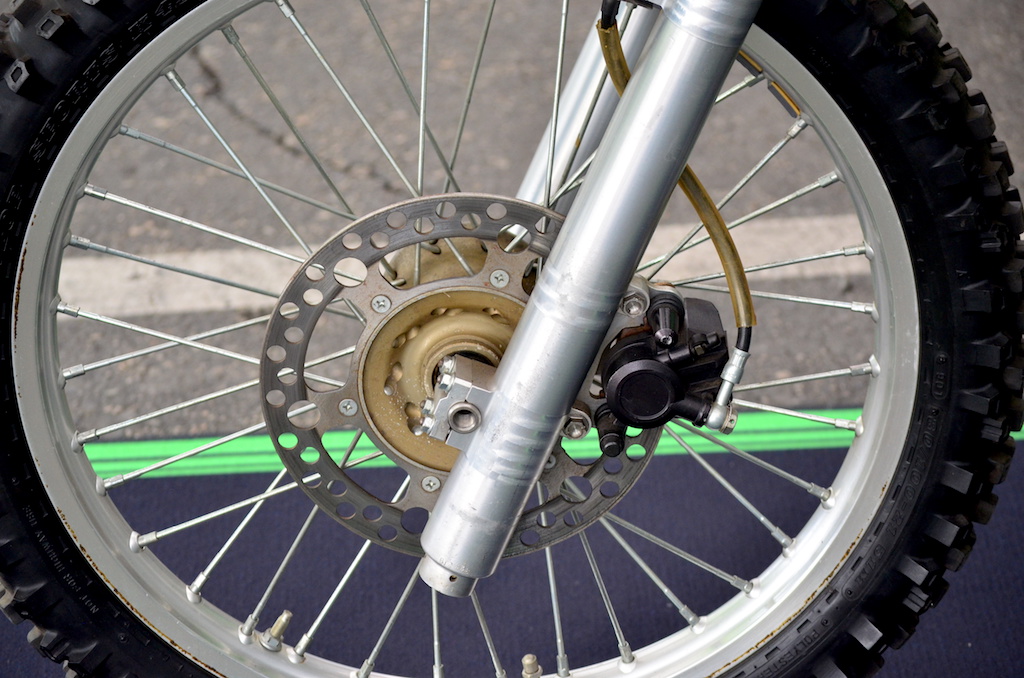 That’s a magnesium front hub and works Kayaba front forks. The brakes were trick at the time as well. 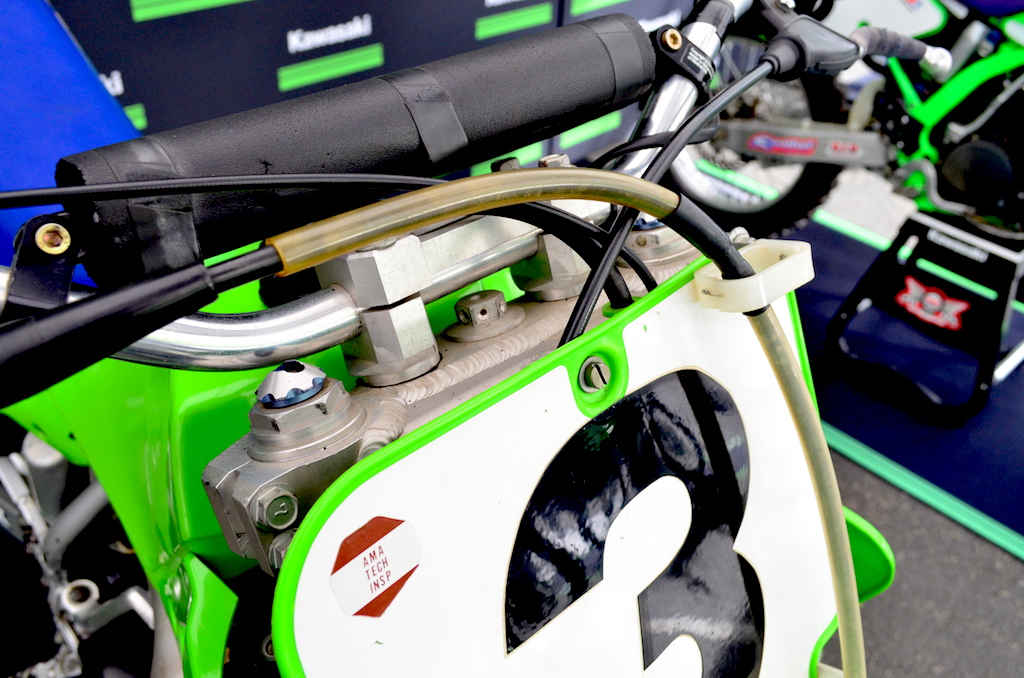 The works KYB forks were held on by one off triple clamps designed in house by KMC engineers. Check out those welds and bar mounts. 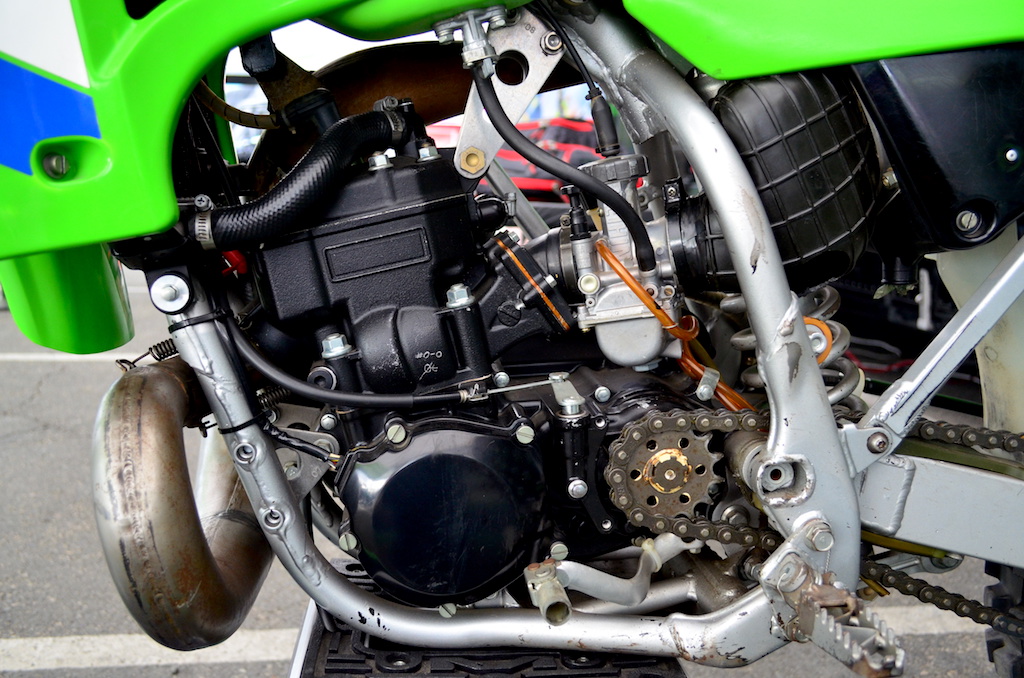 The engine featured KMC factory factory porting specifications that to this day is still a secret. Pro Circuit designed a pipe to match the engine specs. 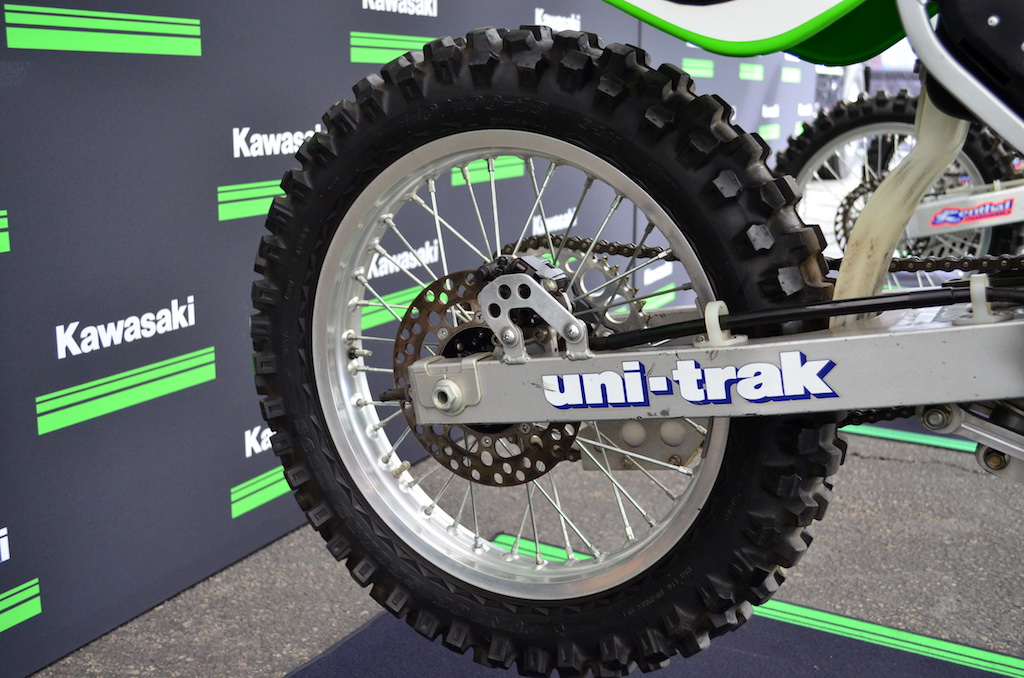 The swingarm was reinforced for strength and yes that is an 18″ rear Dunlop on a factory Supercross machine! 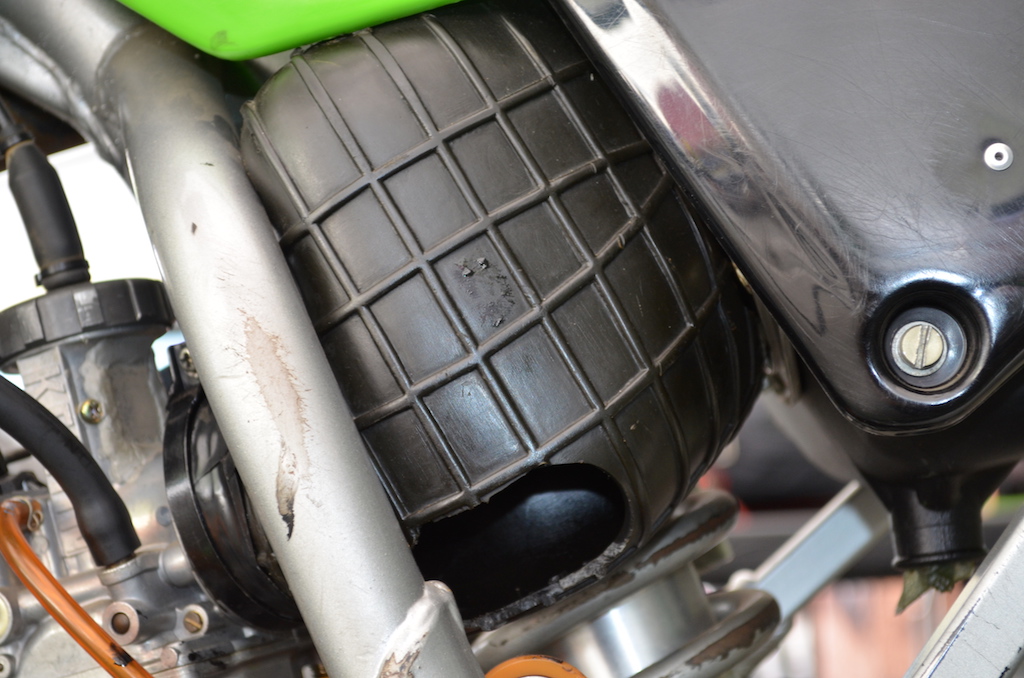 Back in 1987 getting a little extra air into the engine was simple. Factory level modifications have come a long way. 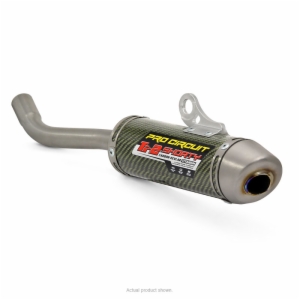 The Ti-2 Shorty Carbon Kevlar/Titanium Silencer is the latest piece of racing technology we offer and is guaranteed to be a favorite for most two-stroke riders.

The Ti-2 is similar to the popular R-304 Silencer except it is constructed with a carbon Kevlar shell, titanium tubing and titanium end-caps. The titanium and carbon Kevlar construction offers the “factory” look and appearance while reducing weight. The Ti-2 is for closed-course racing only. 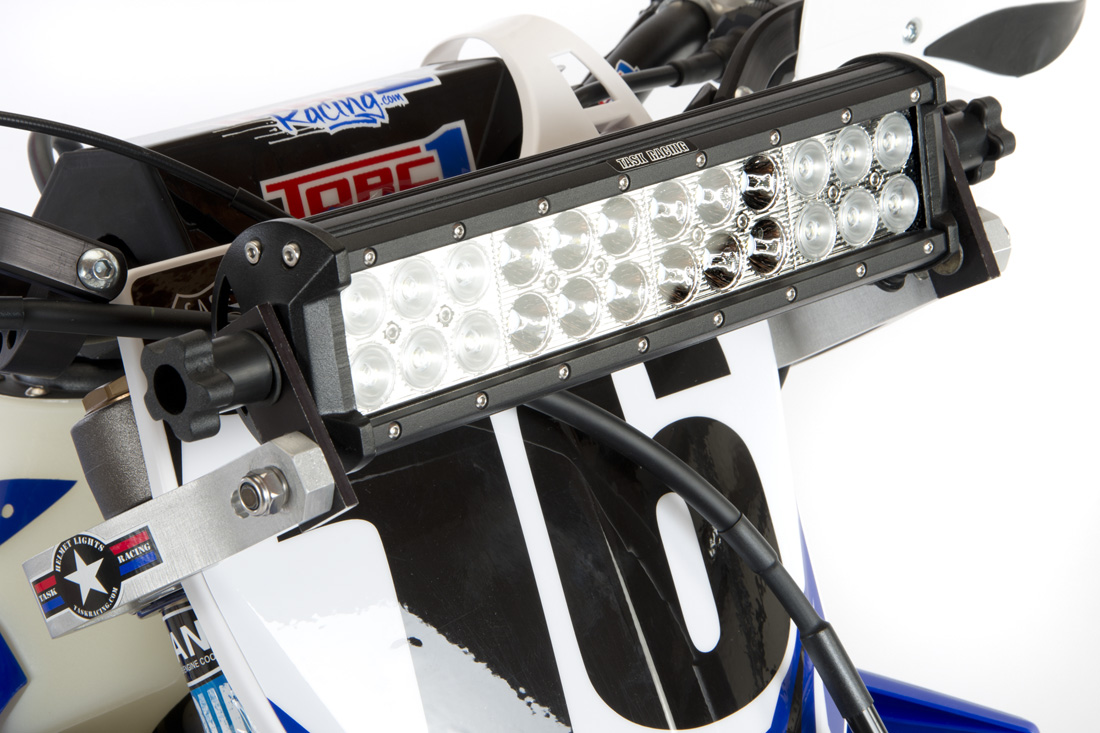 Features for 12″ Light Bar Include:

-Can be tightened down and adjusted up and down to point light where you need it ON THE FLY. Custom adjustment.