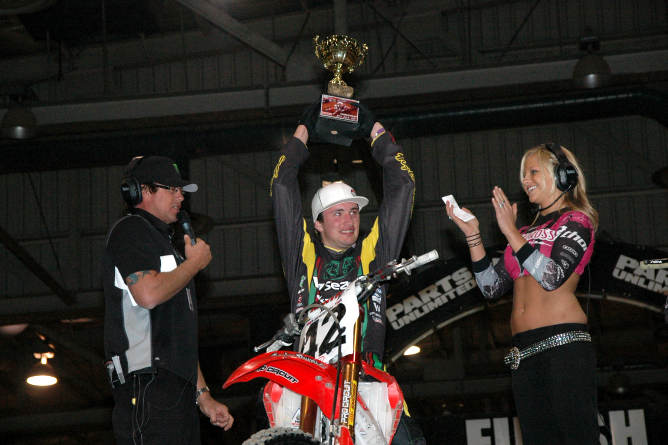 During the long break in the west region 250 supercross series two of the Troy Lee Designs Honda riders made their way to Reno while the AMA Arenacross series was visiting the west coast. Jake Moss and Sean Borkenhagen were looking to do all the racing they could since Moss was returning from injury and Borkenhagen is in the midst of his rookie season and looking to gain experience. Neither of them had ever competed in the arenacross series so they weren’t sure what to expect.

They adapted well, apparently, and stunned everyone by delivering the first two-class sweep of the season. Jake Moss checked out early for the win in the first lites main and “Borky” followed him in for third to round out the podium. In the premier arenacross class, Moss again moved to the front early and pulled a huge lead en route to the victory.

“This feels so great to get a win,” exclaimed Moss. “It’s been a lot of work returning from the back injury I had and this is a big confidence booster for me. I can’t thank the team and my mechanic enough for all their support.”

Borkenhagen was equally excited about his first night’s results. “This feels so awesome to be up on the podium,” said Borky. Adding, “I’m just trying to get as much racing experience as I can before the supercross series comes back to the west coast. This event has been great and I’m having a blast.”

Moss kept his win streak going on Saturday by winning his heat races and both main events once again. The feat rarely happens in arenacross racing due to the competitive nature of the series and this is the first time a rider has swept all the weekend’s main events this year. Borkehagen had a big crash in his heat race and had to get some stitches in his chin. He returned from the hospital just in time for the lites main event though and he decided to ride! He soldiered through the race and finished, despite have a major cut and some loose teeth.

The entire Troy Lee Designs/ Seaspan /PPG /Honda team is now focused on the last three rounds of the west region supercross series. Seattle is the next round on April 18th and the TLD squad will be out in force with Chris Blose, Jake Moss, Sean Borkenhagen and Jimmy Albertson who is just returning from in jury. Expect big things when the team hits the great northwest next month.

The Troy Lee Designs Seaspan PPG Honda race team would like to thank all of the amazing companies that have supported our racing efforts over the years. We would also like to welcome our new sponsors that will be an integral part of the crew in years to come. Among those are Seaspan, Avia, Skull Candy, Rossignol, Kasey Kahne Racing and Icon Aircraft. These companies have come onboard for 2009 and we are excited about working with them.

MULLINS TAKES THE FIRST GNCC OF 2009!

SUSPENSION TECH: IN YOUR OWN GARAGE

ON BOARD WITH MANI AND HIS WINNING ERZBERG RIDE- THIS IS SAVAGE!