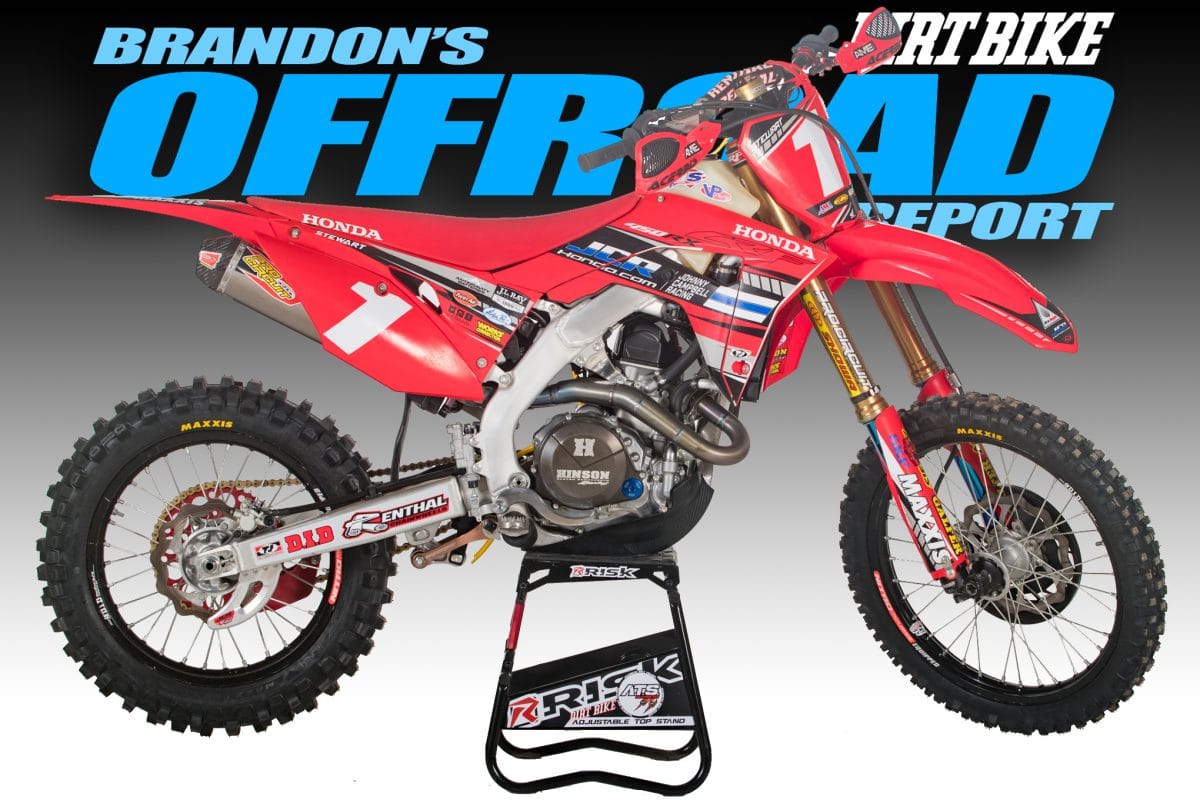 A few weeks ago we were given the chance to go and check out the the 2020 Honda CRF450RX out at round 6 of the National Grand Prix Championship in Ridgecrest, California. Though a Honda intro, the Johnny Campbell Racing (JCR) Honda team opened their doors to the test riders in attendance to give them a peek at what goes into their weekends, from how their riders prepare for the event throughout the weekend to providing our pit support during the one and a half hour long race on Sunday. This experience was especially insightful seeing how the JCR team houses the reigning series champ, Trevor Stewart. So, between the man with decades of tremendous racing experience who also had a hand in developing the base model Honda CRF450RX and the kid who has brought the bike to success, what goes into setting it up to win off-road races? We talked to the man behind the scenes on the wrenches over at JCR Honda, Gage Day, to give us the low-down. 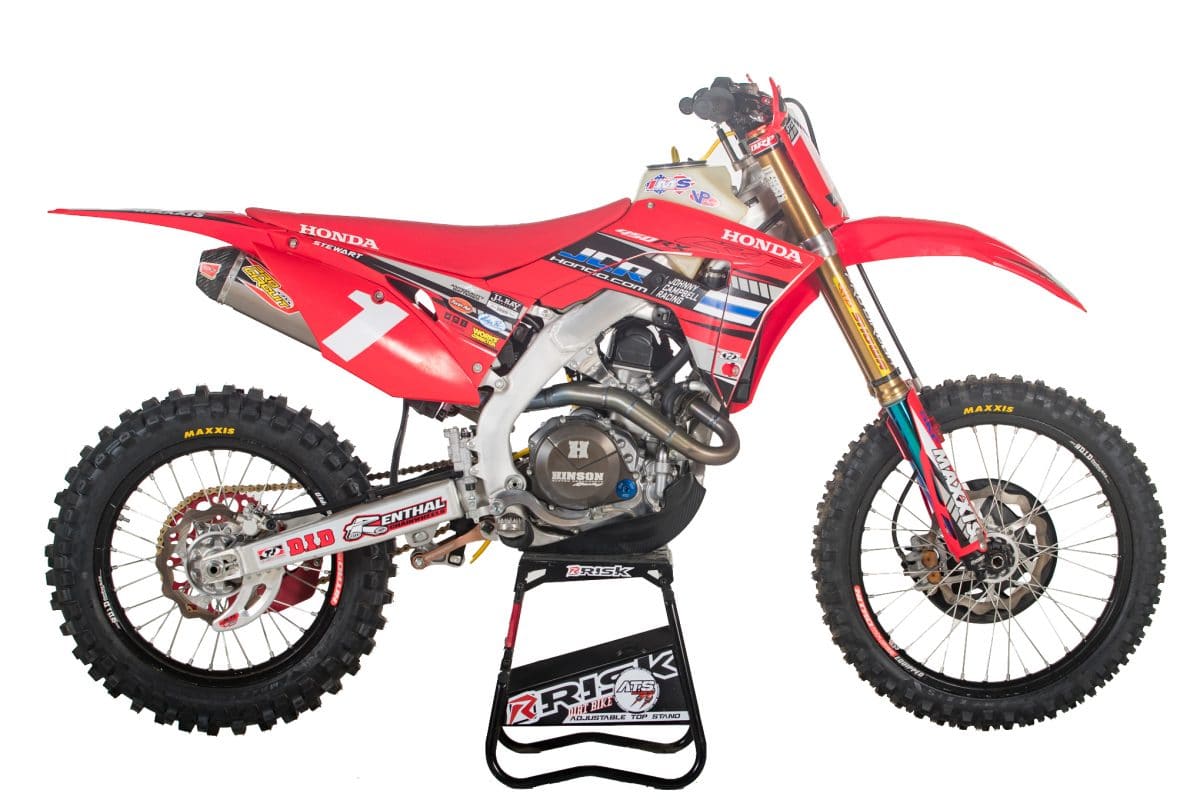 For starters, the basics of most every bike you’ll see at an off-road race are always the same, big tank, stabilizer, skid plate, handguards etc. For the JCR Honda team, they utilize the IMS 2.4 gallon oversized tank so that, whether it be at WORCS or the NGPC series, it reduces the amount of times Trevor has to make a stop in the pits. Bolted up to the bottom of the bike is a plastic Acerbis skid-plate that keeps the frame and motor safe from rocks or whatever might get kicked up into it. 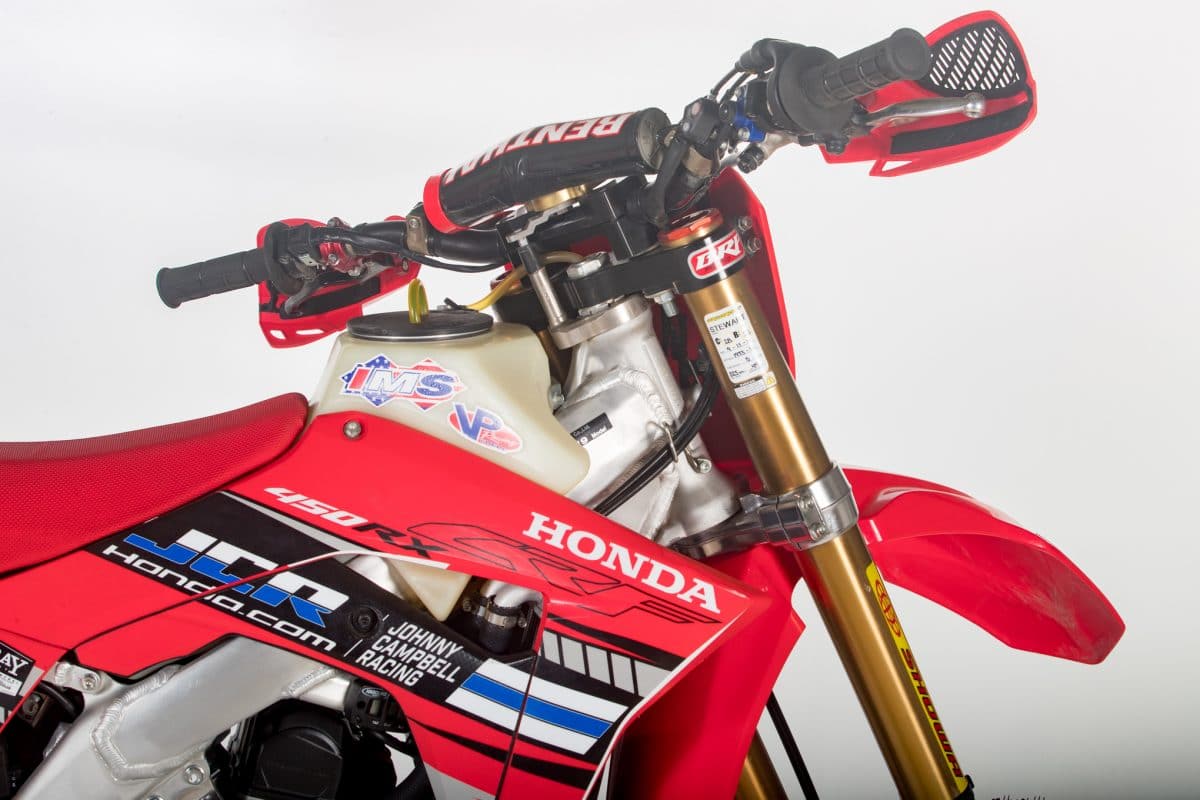 Under the bars sits a Scotts Performance stabilizer, which Johnny has put his trust into over his many years of racing and team management. Since Trevor uses a low, flat bend of Renthal handlebars and opts to still run the crossbar, Gage cuts the middle of the bar so that the stabilizer will fit into the middle of the bars. The finishing touches to the controls of Trevor’s JCR Honda are a BRP top triple clamps to accomodate the Scotts stabilizer, a set of A’ME half waffle grips and Acerbis handguards.

At the back of Stewart’s JCR machine sits a Zip-Ty Racing shark fin to protect the rear brake disc from any kind of hit, preventing the disc from being damaged. For better feel over the rear end of the bike, Trevor runs a Pro Circuit linkage arm and a Showa a-kit shock. In order to stay on the bike through some of the tricky terrains and high speeds that the western off-road racing offers, Trevor likes to run the IMS Core MX footpegs, extra sharp. 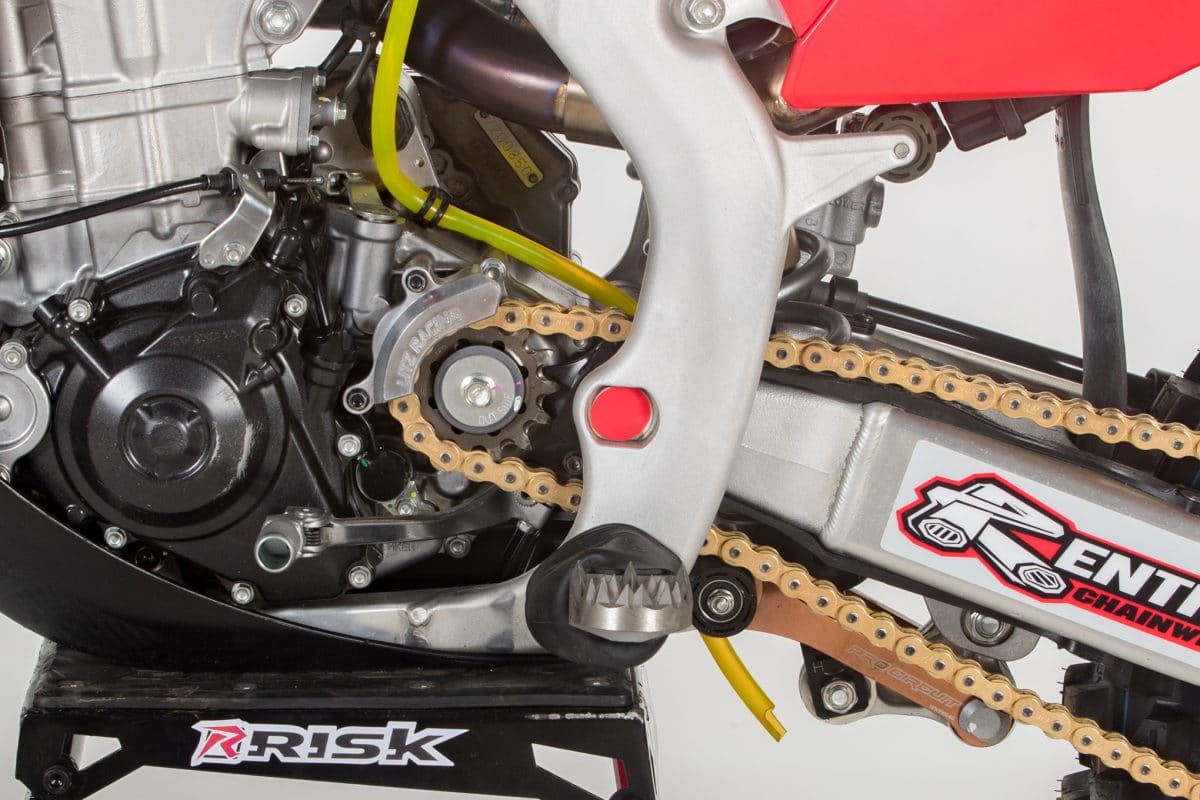 Over on the left side of the bike, the first things I noticed about the JCR Honda 450RX was the billet Litz Racing case saver protecting the motor from a thrown chain, as well as the neat little silicone cover, keeping dirt, water and whatever else out of the swingarm pivot bolt. Acerbis footpeg covers are also added to the bike to prevent dirt build-up on those hinges. 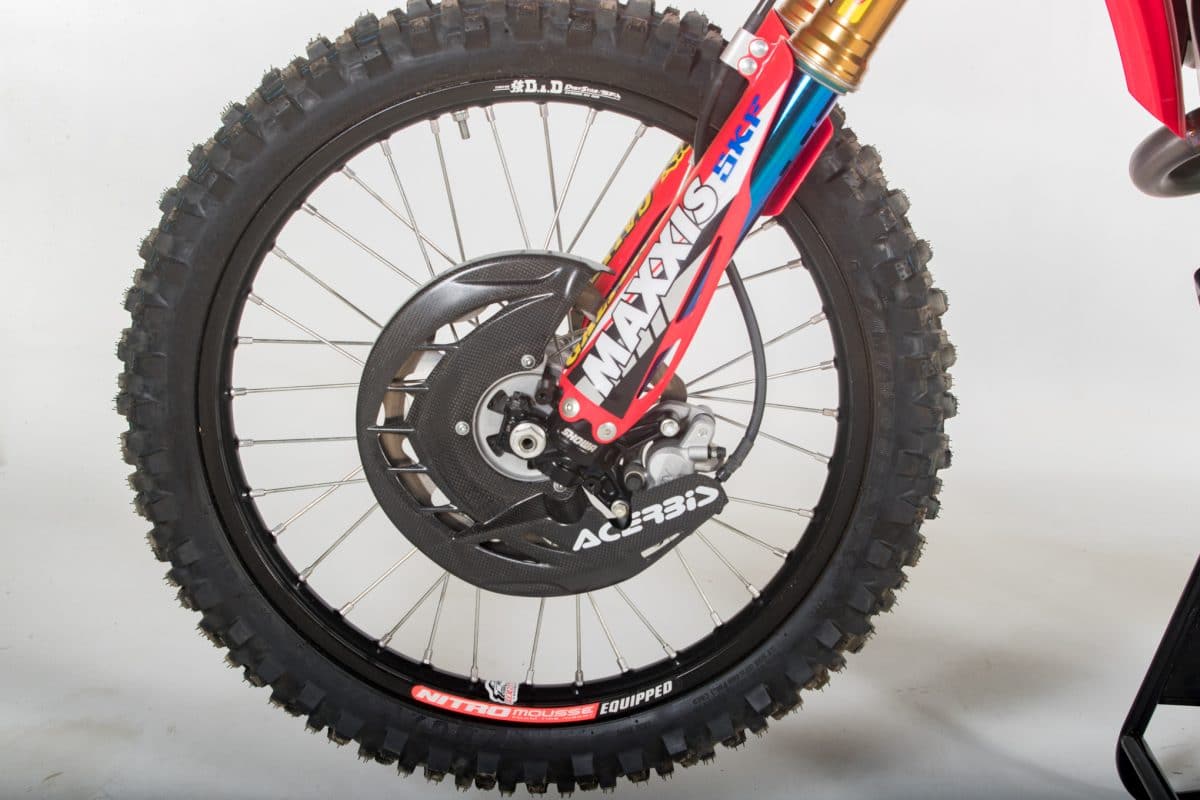 Just like at the rear of the bike, the brake disc is covered to prevent it from being damages. In this case, it’s through the use of a carbon fiber Acerbis guard that is cutout to allow access to the bottom caliper bolt. Also like the rear is the set of a-kit Showa forks set up by Pro Circuit to have the bike riding smoothly over the rough edges of any off-road course. 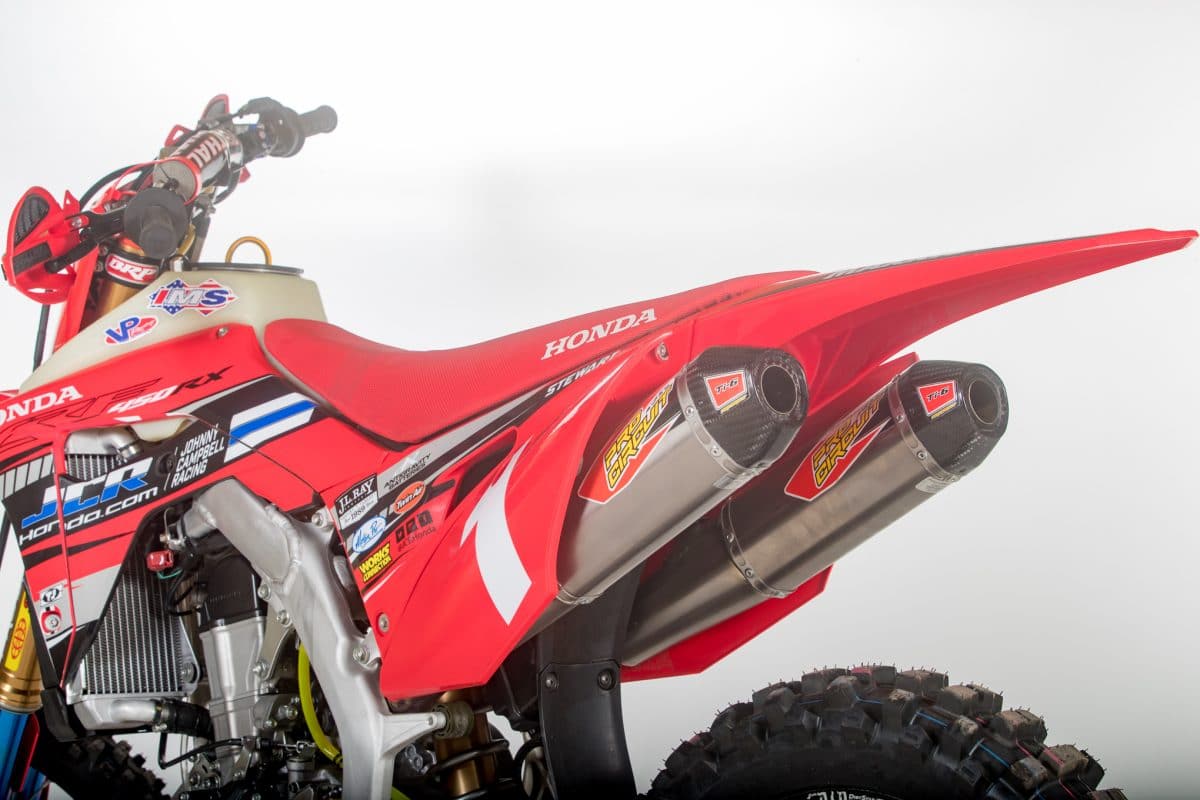 Among the many different options available, the JCR team has chooses to use the Pro Circuit Ti-6 exhaust system to improve the already incredible power delivery of the 450RX. In order to stay gripped on top of the bike, a Throttle Jockey cover is applied to the seat, along with a full graphics kit from them to top everything off.

The series final for the abbreviated 2019 Endurocross season is upon us after just two rounds of racing before today, which isn’t too bad considering a few months ago it wasn’t sure that there was even going to be a series at all. There are talks of a seven or eight round series for 2020, but more info on that is still to come. As far as this year, though, the racing is not done yet. 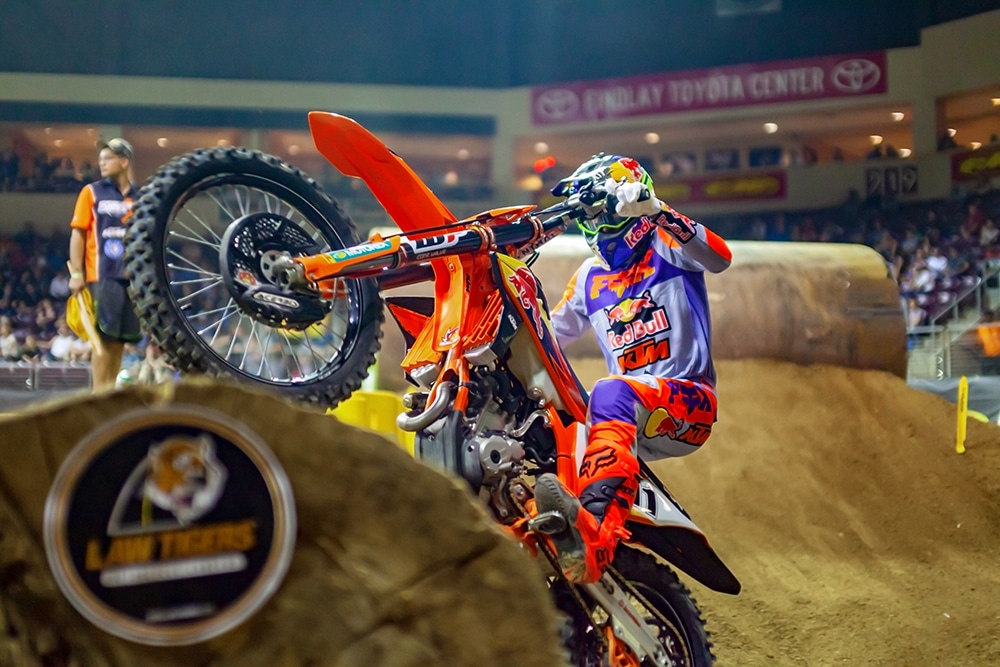 Round three of the series is hosted tonight at the Ford Idaho Center in Nampa, Idaho where the 2019 champ will be crowned. Wins at rounds one and two were split between reigning champion Colton Haaker and past series champ Taddy Blazusiak, with Colton sitting two points ahead leading into tonight. With such a short series, it’s a little harder to speculate who can end up winning the series, Although technically anybody within a 25 point margin of Colton could win the championship, it’s very unlikely. Currently, Taddy and Colton have about ten point over third and fourth in the series, so they have a good cushion before tonight. In the women’s class, Shelby Turner carries in an eight point lead over Rachel Gutish in second and another nine points over Allie Stambaugh in third. 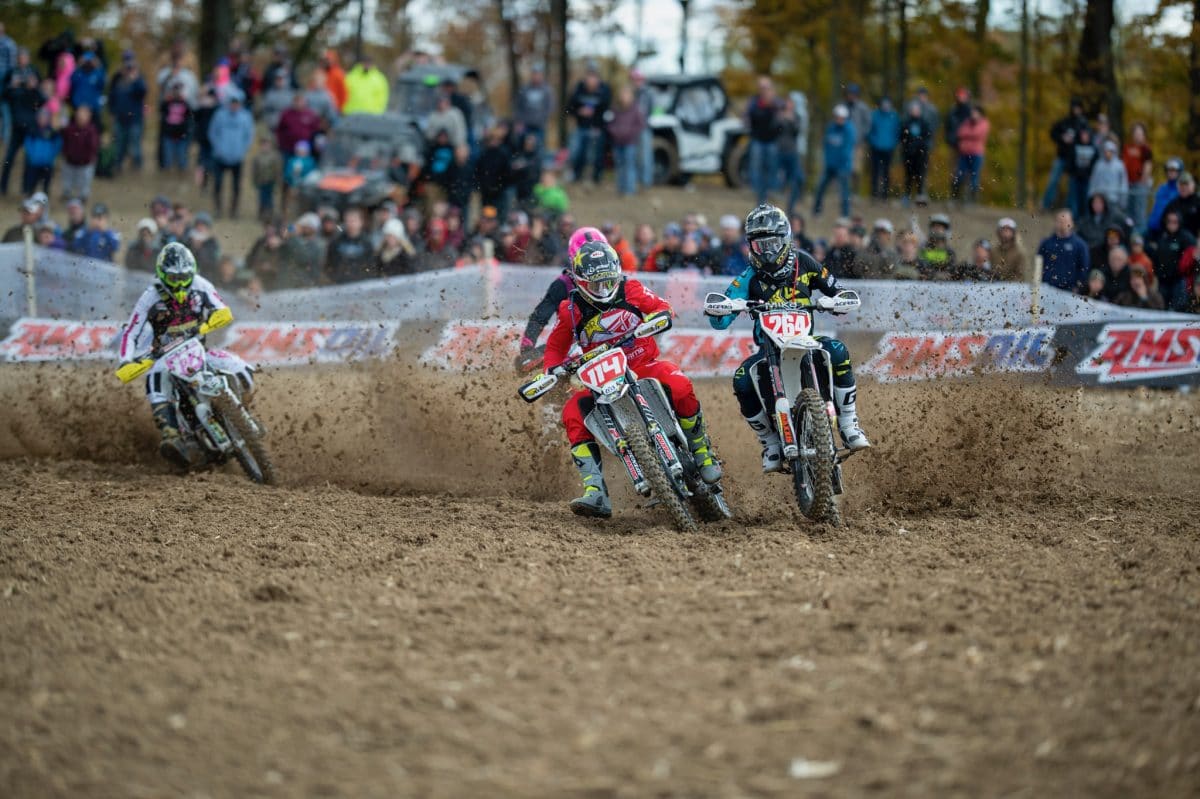 Another series ending this weekend is the GNCC championship, closing the year out again at Ironman raceway in Crawfordsville, Indiana. Three of the four pro division championships are already spoken for, leaving the women to duke it out for the year’s top honors. The fight comes down to points leader Becca Sheets and reigning champ Tayla Jones, who is seven points back. Although Jones has managed eight wins throughout the season so far, a ninth at round six, a DNF at round eight and not racing round nine has kept her from accumulating more points over the course of the year. Aside from the women’s championship, seven time reigning champion Kailub Russell is forced to sit out of round 13 due to injury. In lighter news, though, the 2019 XC3 champion Jesse Ansley will be making his XC2 class debut this weekend aboard his Trail Jester’s KTM 250 XC-F, so be sure to look out for him to do well.

That’s all for this week, but be sure to check back next week when we take a look at the final round of the National Enduro championship, the WESS series finale, round seven of the NGPC championship and a little preview of the 2019 ISDE that takes place in just a couple weeks over in Portugal.