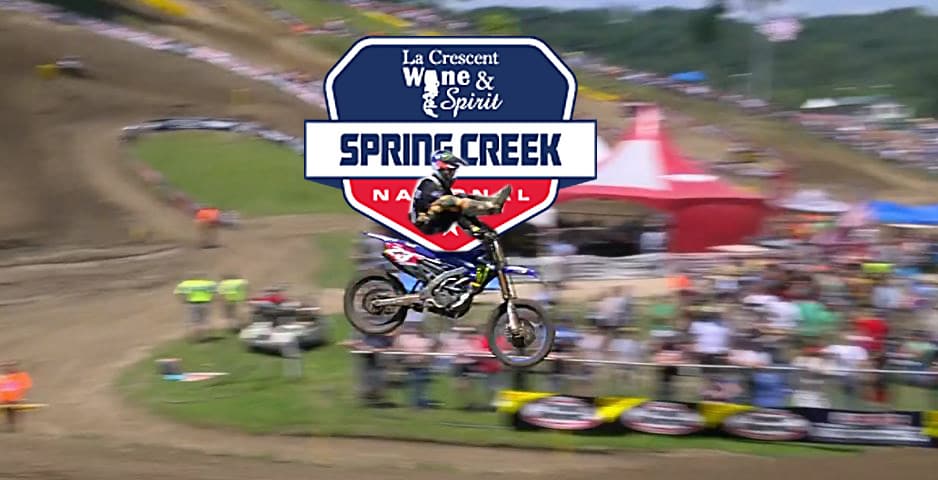 Eli Tomac regained the points lead of the Lucas Oil Pro Motocross series with an impressive two-moto sweep of the 450 class at Millville. In the 250 class, Aaron Plessinger was the man with the speed, and he has built a massive lead in his quest for the championship and the Gary Jones Cup.

A lot of big names quickly found themselves near the front of the field at the start of the moto. Ken Roczen took the holeshot and led the first lap of the race while Marvin Musquin and Eli Tomac battled for second place.

On Lap 3, Tomac passed Musquin but by that point, Roczen had built up a four-second lead. Tomac quickly chopped down that lead and started applying a lot of pressure to Roczen. While they battled for the lead, Musquin struggled to catch up to them. The Frenchman ultimately went down on Lap 6 and lost nearly 20 seconds. He also lost third place to Blake Baggett in the process — a two-point swing that could prove costly in his attempt to hold onto the red plate.

Meanwhile the battle for the lead raged on. All told, it lasted about 15 minutes before the lead finally changed hands. At that point, lapped traffic became a factor, with Roczen getting held up as Tomac zoomed by him through the whoops. Tomac started to open up a lead over the final laps, but as RedBud proved, it’s not over til it’s over. This time though, Tomac averted any mechanical issues and took the checkered flag over Roczen by 13 seconds.

Third place went to Baggett, who earned his third moto podium of the season and his first since Round 3. Musquin and Justin Barcia rounded out the top five.

After losing the points lead at RedBud, Tomac needed just one moto to recapture it. By picking up seven points in Moto 1, he now holds a four-point edge over Musquin as they head into the second moto. A top-two result later in the day would ensure that Tomac gets the red plate back.

Yet another holeshot for Justin Bogle — that’s his fourth one in the last six motos — but Marvin Musquin and Ken Roczen both got around him on the opening lap. As those two began to battle for the lead, Eli Tomac was working his way into the top five. He picked off Bogle for fifth, then got around Weston Peick for fourth and Blake Baggett for third. That left him with 23:30 on the countdown clock to make a run at Musquin and Roczen.

Tomac started closing in on Roczen but made a mistake right around the midway point — he nearly crashed coming out of a turn. He caught back up, and with a little over five minutes to go, Tomac made the pass stick.

With two and a half laps to go, he charged through an uphill section and took the lead away from Musquin. That allowed Tomac to pull away for his class-leading 11th moto of the season. It also gave him his sixth overall win of the year and his fourth 1-1 sweep.

Musquin (4-2) finished third overall for the day behind Tomac and Roczen (2-3).

Joey Savatgy, Jordon Smith, Austin Forkner and Justin Cooper emerged up front, but Savatgy’s time out front was short-lived. He tipped over, which allowed Smith to take over the lead. Meanwhile Cooper got around Forkner on the opening lap to move into second place behind Smith.

Within a few laps, Aaron Plessinger  moved into third, then passed his teammate Cooper for second about eight and a half minutes into the race. Cooper then gave up third place to Forkner shortly after.

Plessinger then caught and passed Smith to become the new race leader. He cruised to his third straight moto win. The second half of the race featured a good battle between Smith and Forkner for second place. The battle went on for a few laps until, with seven and a half minutes left on the countdown clock, Forkner went outside of Smith to grab second place. Forkner finished the moto in second with Smith in third. Cooper and Shane McElrath rounded out the top five. Not only did Plessinger win the moto, he was able to boost his championship lead by 11 more points thanks to Alex Martin’s seventh-place finish.

The second moto immediately produced a battle with championship implications after Alex Martin took the holeshot with Aaron Plessinger right behind him. Plessinger moved into the lead on the opening lap after getting past Martin on a downhill section of the course, and though Martin kept it close at first, Plessinger started to open things up after a few laps.

While Plessinger was sitting in good shape for the overall win, battles materialized that would determine the rest of the overall podium. Justin Cooper, Jordon Smith and Austin Forkner were all running in the top five early, but Joey Savatgy was on the charge. He made the move on Forkner for fifth place about seven minutes into the moto, then worked his way around Smith shortly before the race’s midway point.

Then it was Forkner’s turn to make a charge. After displacing Smith for fifth place, Forkner caught back up his teammate Savatgy and took over fourth place. That tentatively put Forkner in position for a second-place overall finish, but for the third week in a row, a crash knocked him off the podium completely. This time he went down on a jump because of a collision with a lapped rider, and he ended up with a bent radiator in the aftermath of the crash. That required Forkner to stop in the pits — as a result, he fell out of the top 20 before ending the race in 18th. Martin took second place in the moto and Cooper finished third. Rockstar Energy Husqvarna’s Michael Mosiman set a career best with a sixth-place moto finish.