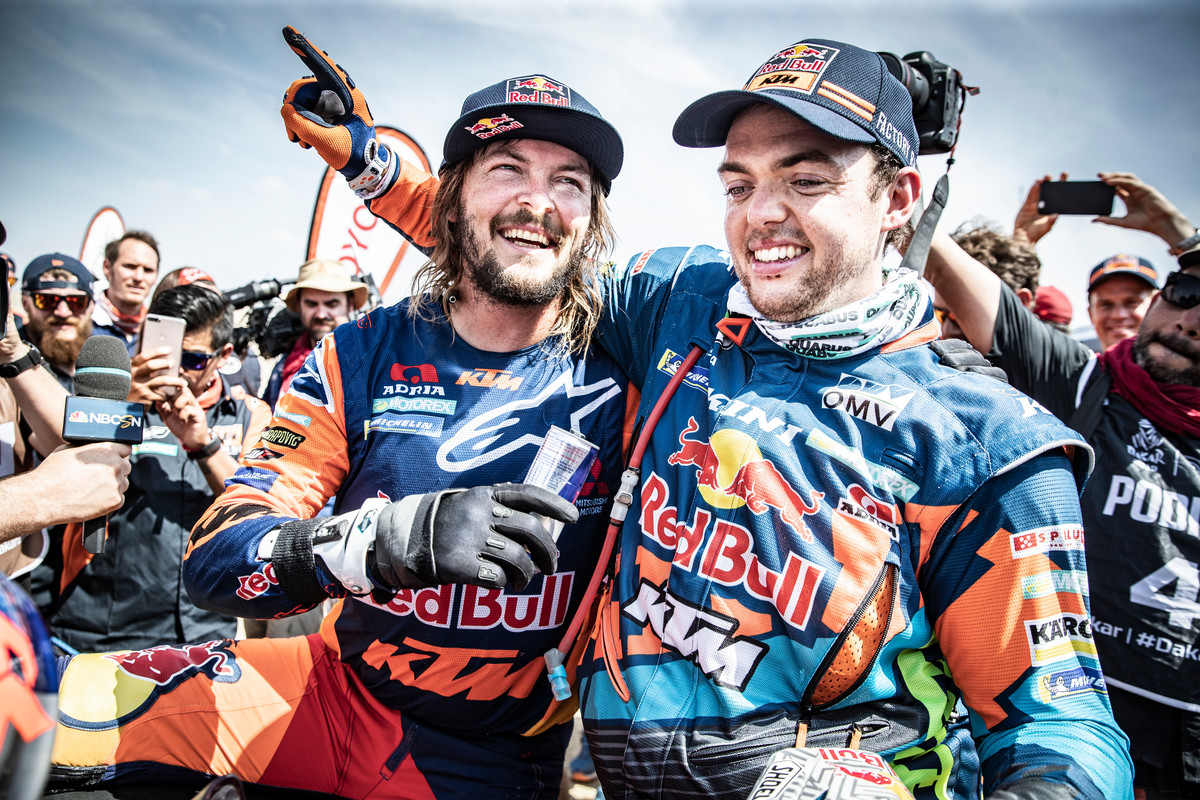 KTM, it seems, can do no wrong in the Dakar Rally. Toby Price today won the final stage of the 2019 rally, and in so doing he captured his second personal  win and KTM’s 18th consecutive one. Price was considered somewhat of an underdog going in because of a wrist injury. It was also a very competitive year with five different manufacturers winning at least one stage apiece. In the end, Price’s closest competitor was Rockstar Husqvarna rider Pablo Quintanilla, who had to make up a full minute on the short final day. Quintanilla ended up crashing and finishing 22nd, dripping back to fourth in the final standings.

For the Americans, Andrew Short was a ray of sunshine after Ricky Brabec’s departure on stage eight. Short rode a conservative race to finish 5th. Garrett Poucher was 32nd in the end and Nathan Rafferty was 50th. To look back over the last 10 days of Dakar coverage, click here. 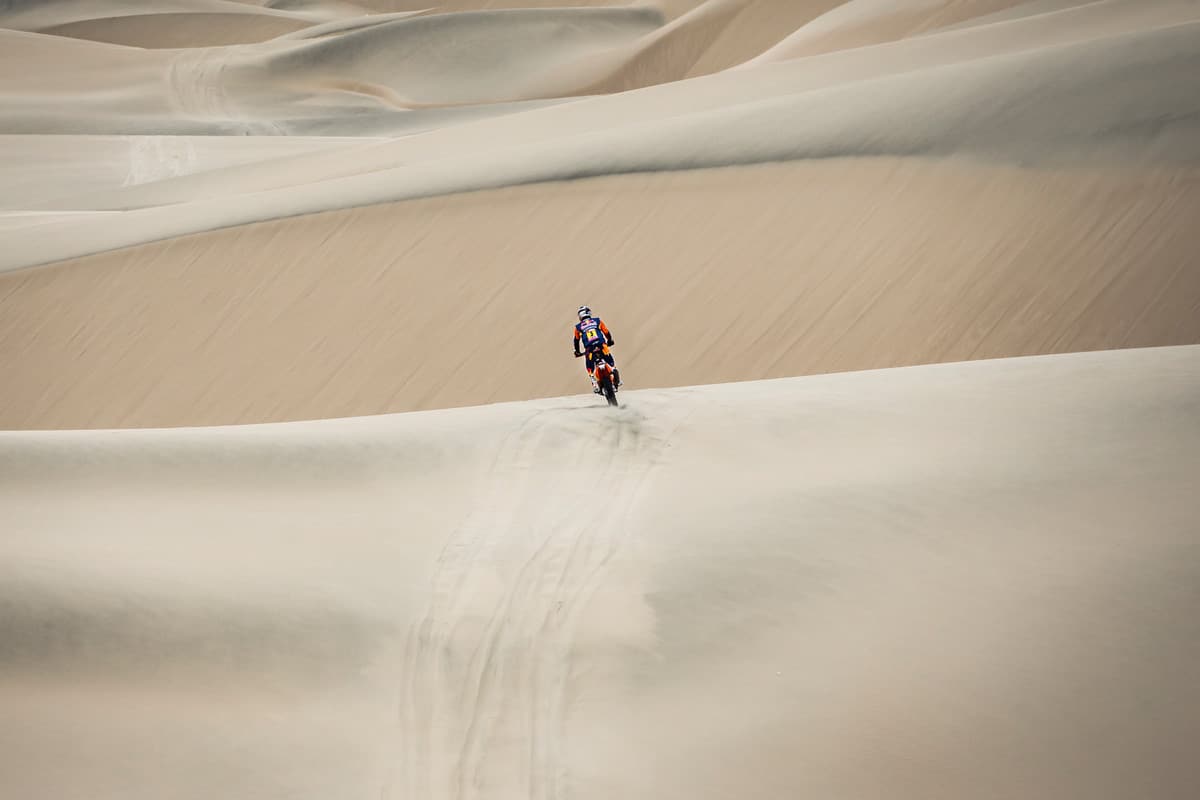 “It feels amazing to stand here knowing I have won the Dakar, I don’t think it has really sunk in yet. I thought at the beginning of the event I would be lucky to even make the rest day. My Red Bull KTM bike has been amazing, I want to say a big thank you to my mechanic for that.

The whole crew here do an amazing job – without them I would be no one. The team put in so much work on the lead up to the event and when we get here it’s down to me out there on the track so it feels amazing to be able to reward them all with this result and keep KTM’s winning streak going.
“It was so tight going into the stage this morning, both Pablo and I knew we would have to push right from the start. Unfortunately for him, he went too hard off a dune but he really deserves a win too – everyone that starts this race deserves a win. The plan now is to go home and relax for a little while, I know I need to have my wrist seen to, so I’ll get that sorted and then it won’t be long before we start it all over again.”

“Today I gave it all for the overall win, but things did not go as planned. A few kilometres into the stage there was a broken dune and it was hard to see it. I jumped it and landed heavily on my foot. Luckily the medical crew arrived a few seconds later and they helped me get back on the bike.

The rest of the day it was just a struggle to get to the finish. If you want to win the Dakar you do need to take some risks and that’s what I tried to do today. I was really trying my best today for myself and for the team. It was a tough day but still I’m happy I’ve finished this Dakar. I take my fourth-place result and focus on the future. Overall, I’m happy I gave 100% at this Dakar and took some risks while battling for the win. I will come back even stronger next year.” 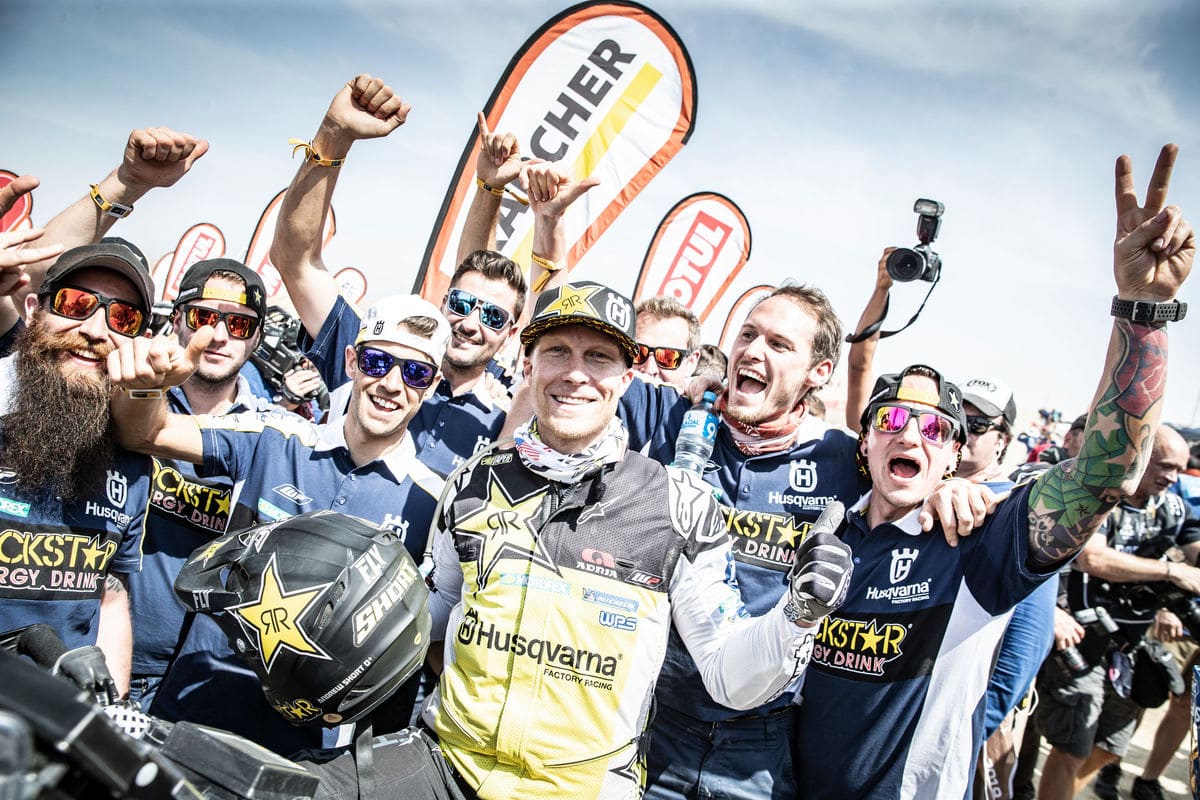 “It’s been a long two weeks and I’m over the moon with my fifth place in the overall standings. I entered this Dakar with more experience and having spent a good amount of time working hard to be better. I’m really happy it all worked out well for me this year. I knew what to expect and this made the whole race easier for me. I’m also happy because I managed to make some big improvements during the race and I think this also showed in my results. Making it to the end of this Dakar today has been the most rewarding part of the last two weeks. All the team worked really hard and this top five result is the best reward for all their hard work.”