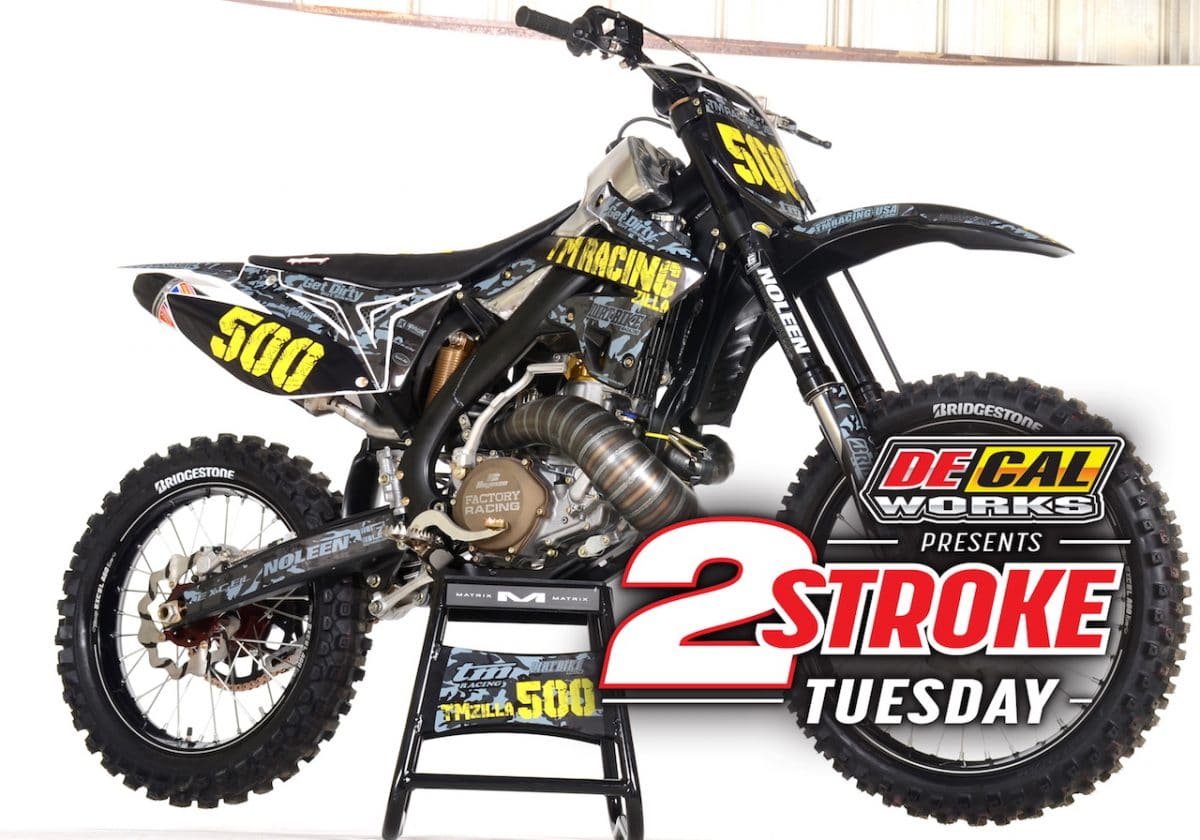 On this week’s Two-Stroke Tuesday brought to you by Decal Works we have gone TM 2-Stroke crazy! It’s all about the small Italian manufacture’s premix burning machines. Our main focus is on the recently completed TMZilla project that uses a TM250 MX model chassis and a highly modified Honda CR500 engine. Along with the exclusive look at this machine we are also letting CEO of TM Racing USA Ralf Schmidt talk about the build and his thinking behind it. You don’t want to miss 2-Stroke Theater this week and if you are a fan of exotic two-stroke builds the link at the bottom of this post is a must see. 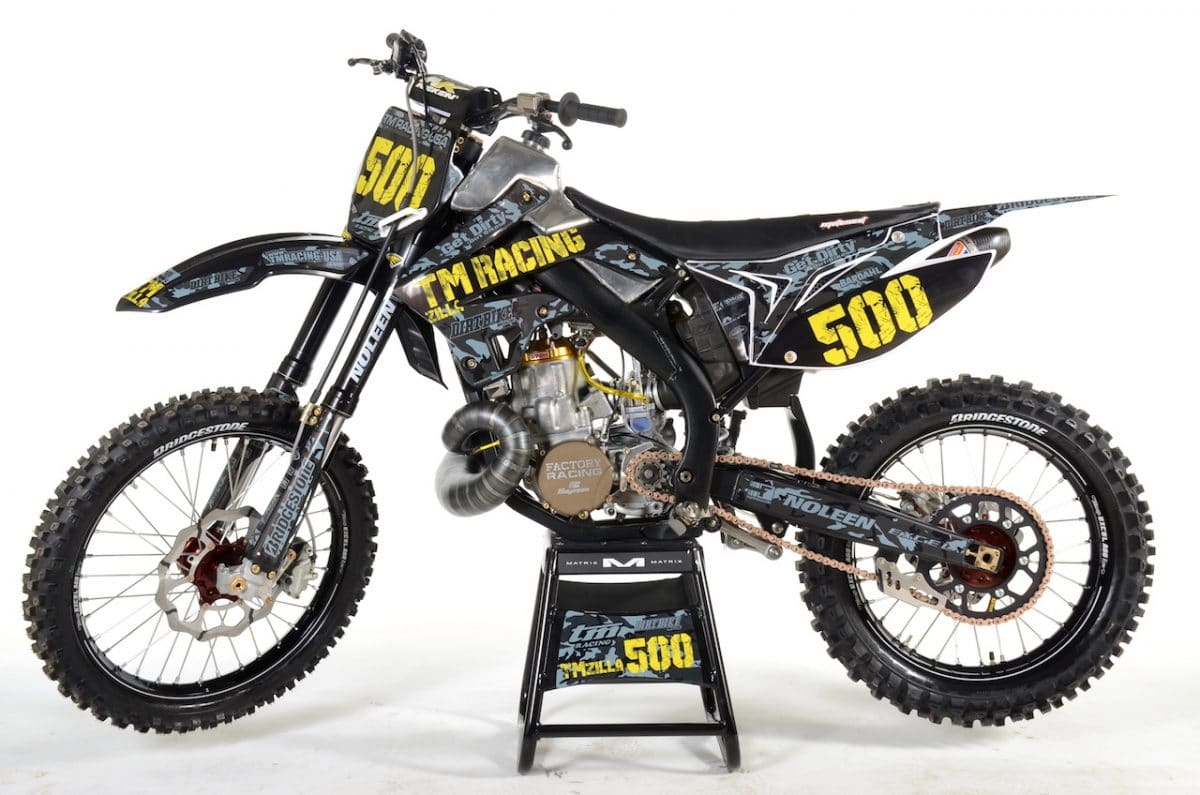 A TM chassis with Honda CR 500 engine? Why is TM Racing USA spending any resources and budget on this?
Well it’s not really a TM USA effort, but it’s more of a private project by Ralf Schmidt who runs the show at TM Racing USA. Ralf raced Honda CR500 for many years back in Holland (late ’90s) and the only way to get back on one of those beasts would be putting it into a modern TM chassis. This will never be a production bike, this is just a fun project and could be a main player at any 2-Stroke National held later this year at Glen Helen Raceway.

Here is Ralf talking about the TMZilla build:

“On Craigslist I found a fairly affordable CR500 almost a year ago – prices are crazy, but this was a clean bike, so it was a very good starting point.  Finding the right frame was the next step and we tried the 125/144 , the 450cc and the 250/300 frames – surprisingly the new 2019/2020 250/300cc frame was a perfect match – just 2 brackets needed to be moved. Cylinder, carb and airbox lined up perfectly and the Scalvini exhaust guard just needed the brackets to be moved.
Dave Turner who owns GET DIRT DIRT BIKES (No.1 TM dealer in the USA) wanted to help and did all the welding jobs on this project.  The frame and pipe modifications were quickly done – the aluminum tank  (’08-’14 TM 2-stroke big tank option) was a bit more work, but ended up also a perfect match and will allow the bike to have enough fuel even for a GP race. 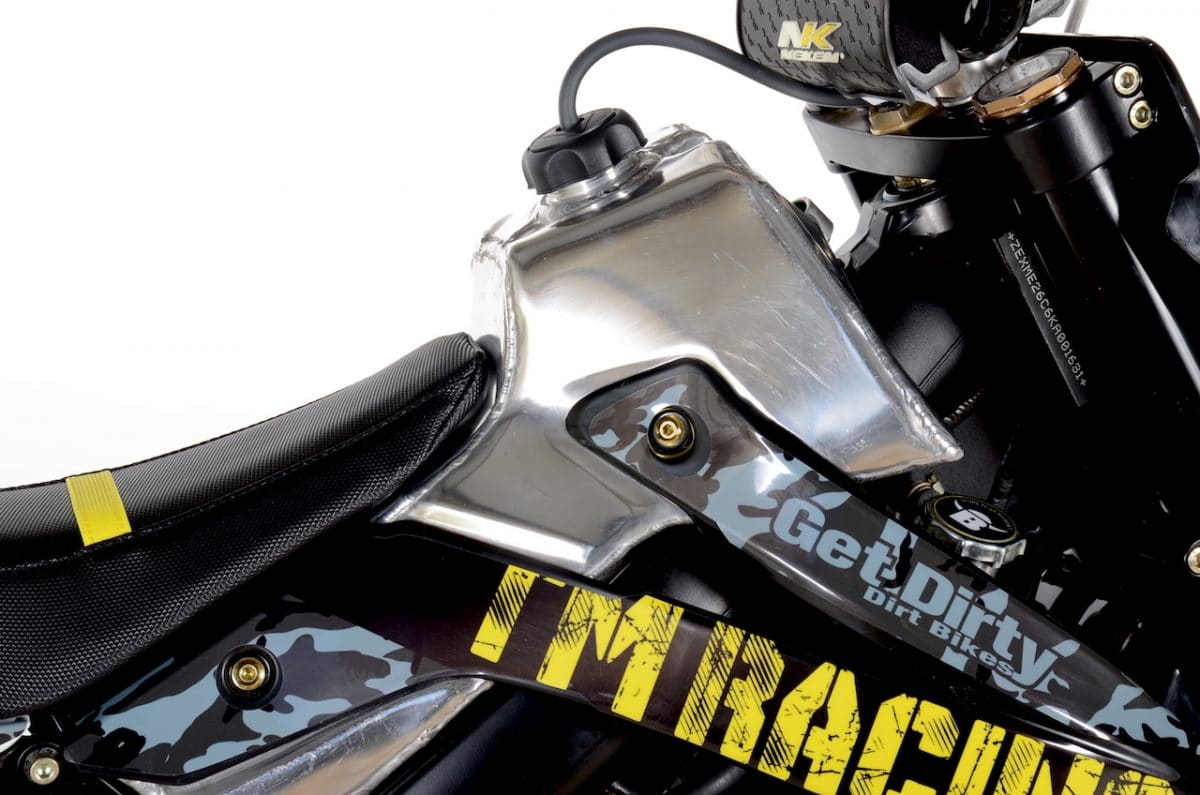 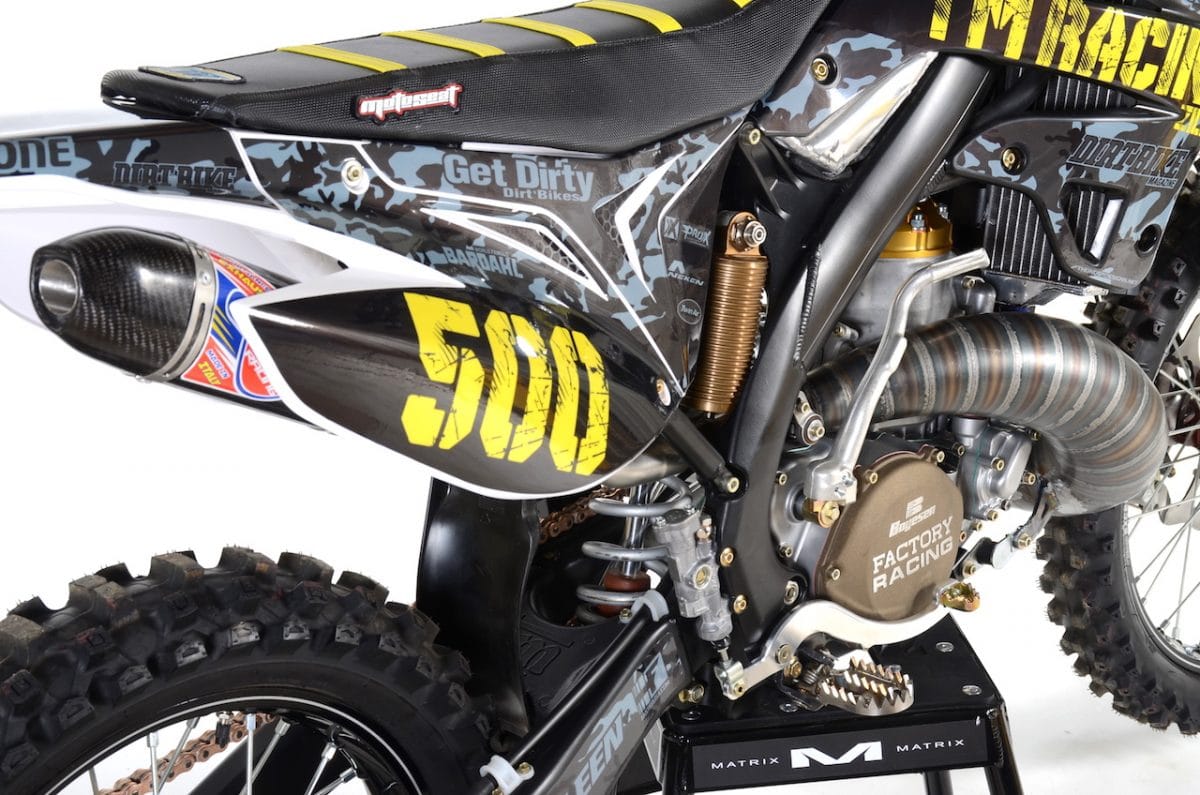 What was missing was a great design and a name.  Pastrana named his Suzuki – RMZilla
so we named our project TMZilla 😊 . We told Thunder Design we wanted a camo theme and got from SHOT RACE GEAR templates of the 2020 designs they used … that was a prefect match! 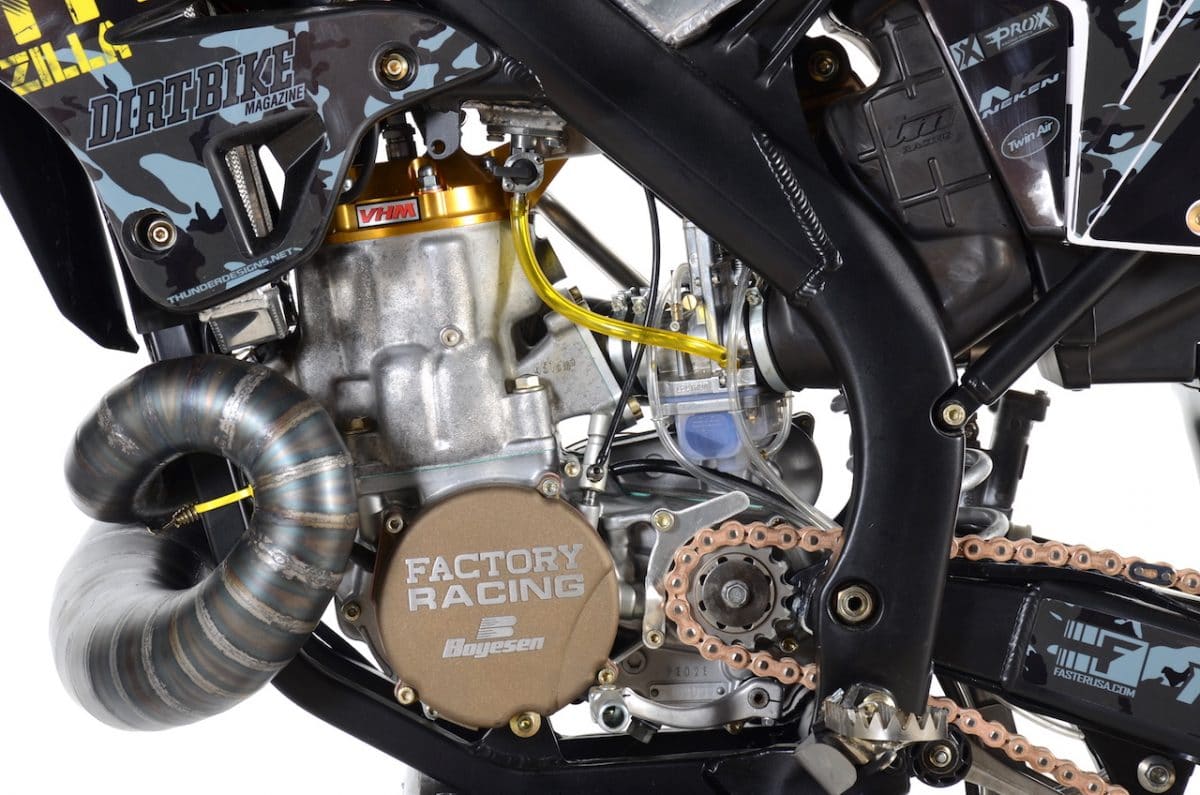 We brought the bike to the Dirt Bike Magazine studio and it didn’t even run before that.  Back home, it was time to start up the beast – Top dead center , one click further – back to the maximum stroke of the kickstarter (which is an OEM TM part by the way) and all you got. It’s alive!!!  The sweet sound of a 500cc 2-stroke–and also the vibration … hahahaha 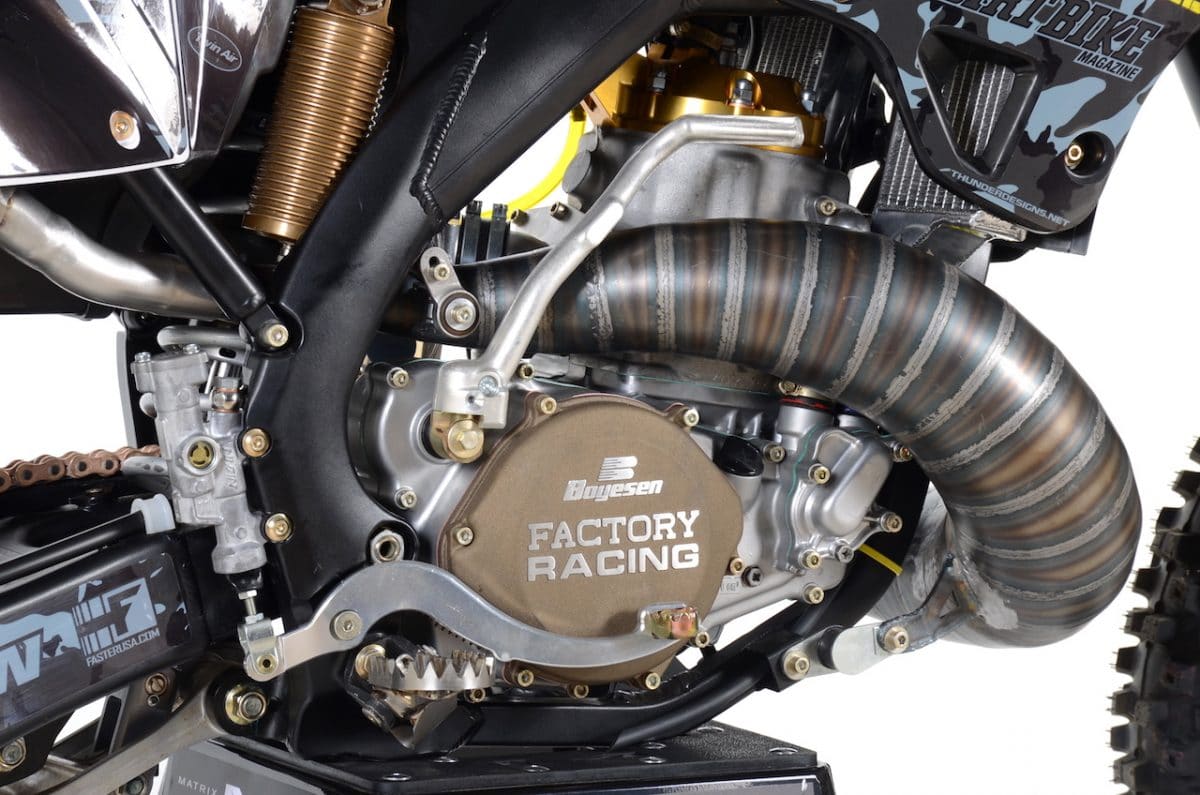 The 500cc requires a big track – I remember going to the sand track in Lommel, Belgium and being one of the first riders on a perfectly prepped track … man … that’s when you can hang it out on a 500. 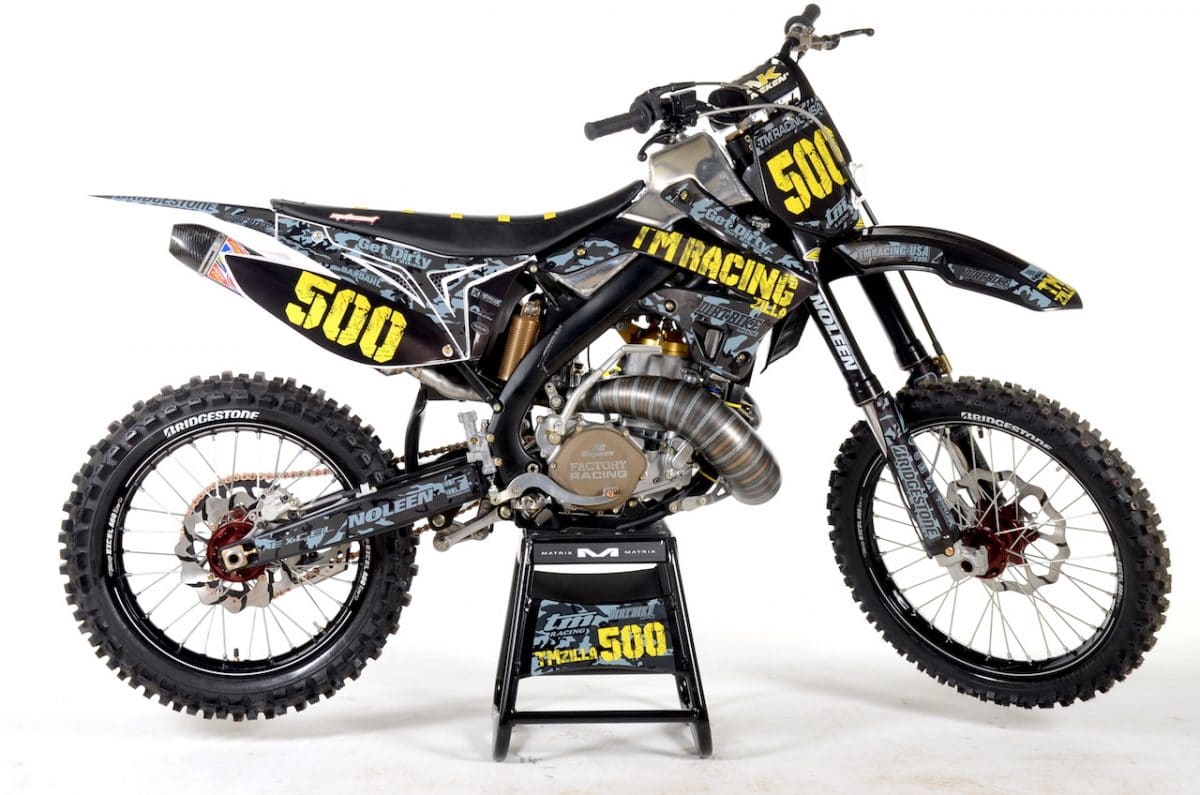 Let’s see how this beast will work in Glen Helen with the long start straight and the uphills. Guess most will just see the back of my shirt 😉  (or my terrified face when I loop out). See you at the track , try to keep up with the TMZilla!”

Don’t worry, there will be more on the TMZilla 500 project in the coming weeks. We have videos planned with Travis Fant, a photo shoot with Ron Lawson and a complete test in the magazine by Mark Tilley. Stay tuned!

If you are a fan of exotic 2-Stroke machines, check out this build we did with Ralf at TM Racing USA awhile back. Click the image below for more now!