A fuel-injected piece of art 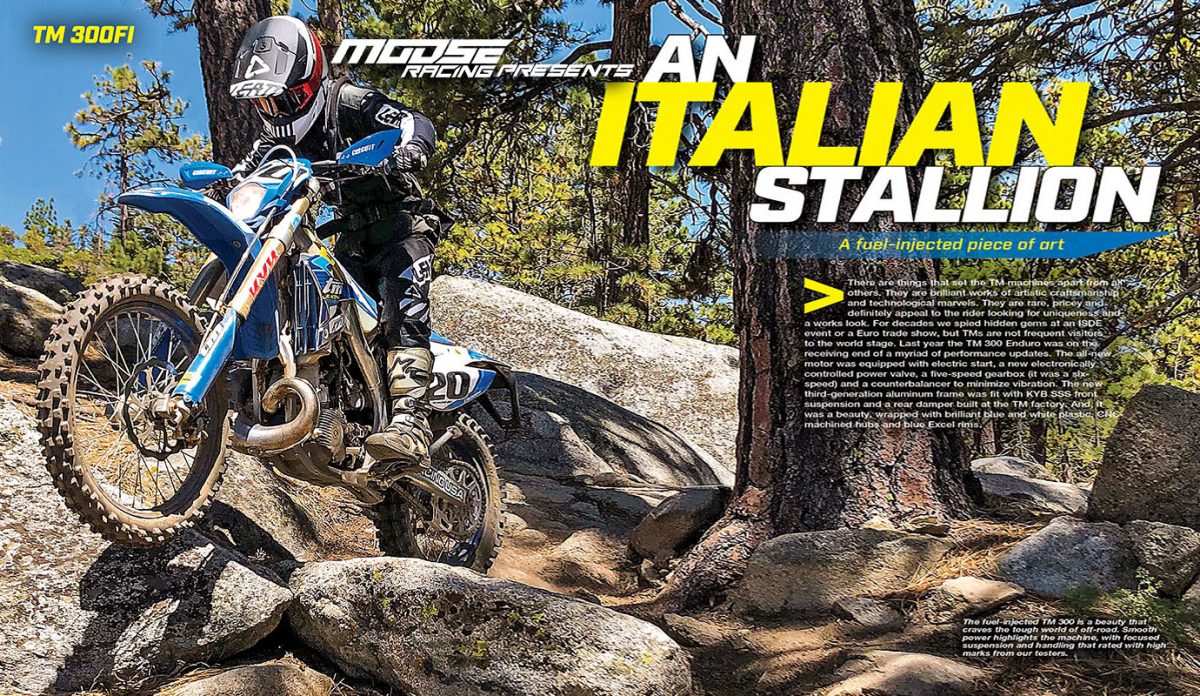 Last year the TM 300 Enduro was on the receiving end of a myriad of performance updates. The all-new motor was equipped with electric start, a new electronically controlled power valve, a five-speed gearbox (it was a six-speed) and a counterbalancer to minimize vibration. The new third-generation aluminum frame was fit with KYB SSS front suspension and a rear damper built at the TM factory. And, it was a beauty, wrapped with brilliant blue and white plastic, CNC-machined hubs and blue Excel rims.

INJECTED!
For 2020, it returns in identical form but is now fuel-injected. The injector system is very similar to the KTM’s and Husqvarna’s, with the fuel nozzle going into the two-stroke cylinder’s transfer port. The throttle body provides air, and it feeds through a Moto Tassinari VForce 3 reed block. The TM uses Microtech electronics. It features oil injection, carrying 700ml of oil in the frame. It uses a separate oil pump, and the fuel/oil ratio is controlled by the bike’s ECU, which varies the mixture depending on the engine’s demands. We were informed that the machine was built for Euro4 mandates, pushing cleaner exhaust in order to be two-stroke-legal in Europe by 2020.

The machine is fit with a plated HGS exhaust and muffler (no spark arrestor). The electric starter is mounted on the front of the engine, and on the Neken handlebar there is a weird orbital switch (for lights, the kill switch and a horn for European models) and a dual-stage map switch that allows you to move between a traction map and a hit map. The clutch is hydraulic (Brembo at the master cylinder and lever) and has new, 23mm-offset, machined, aluminum triple clamps that tote the 48mm KYB SSS forks. Out back, the shock looks like a factory-spec damper and is built at the TM factory. The wheels are beauties: blue Excel rims laced to in-house machined hubs. Up front the braking is handle by Brembo, and in the rear (including the master cylinder) by Nissan. Tires for the American market are Dunlop AT 81s front and rear.

ON THE TRAIL MOTOR/POWER CHARACTER: The engine churns out very smooth power, never blowing out anything too aggressively. It has little vibration (maybe a skosh more than a KTM 300, but considerably less than a YZ250), and off idle (roll-on) it’s a little soft. Here the traction map (that’s what we call it) makes a big difference, letting the machine make traction and lug, pulling a higher gear to fight wheelspin. According to TM, the fuel-injected machine makes almost 4 more horsepower than the carbureted version but is much smoother and friendlier down low. With the hit map, we had trouble making traction as the power was soft, then slammed pretty dramatically in the midrange. But, as the terrain opened up and we did some hill-climbing, this mode made sense. We did have a KTM 300 TPI along for several of our test sessions. It was a shade stronger down low, a bit smoother and more linear into the peak power, but the TM definitely has more juice up top.

We tested in the high desert (around 3500 feet) and the mountains (5000 to 8000 feet) ,and came away impressed with the cleanness and clarity of the power—it’s consistent with no quirks. The positive throttle response and very predictable power curve target technical riding, and the bike never bogged or missed a beat, regardless of the elevation. It never felt too lean or too rich and idled perfectly at all times, even on steep downhills. Every once in a while the bike would take a few cranks of the electric start to restart, but nothing that got us to panic. The oil injection performed fine, and we never had to refill the system through multiple tanks of fuel.

Good marks go to the 5-speed gearbox. It had nice spacing and gave us proper gearing for both enduro trails and some faster terrain. The clutch action is smooth, though the lever was oddly angled mainly due to the cluster of switches on the left side of the bars. This is something we would modify.

ERGONOMICS/HANDLING: The layout of the TM starts with a Neken bar, good grips and a nice wide footpeg. The seat is low but has decent foam and a good gripper cover. For the average-sized pilot, the ergos are fine, but taller riders will feel the cockpit is too tight. The pegs feel high, the seat low and the bars are in your lap. All of this is fixable, but the TM doesn’t come stock with a generous amount of adjustability.

The front Brembo brake is strong and has good feel. Out back, the rear Nissan unit performed without a thought, which is good. The TM is narrow and has a thin feeling at the knees. The seat/tank junction is smooth. The fuel tank holds 2.24 gallons, and we averaged about 55 miles to a tank. With a good feel through the middle of the machine, contact points let the rider grab with their legs, helping the TM to feel light and manageable. The KYB front end offered a positive and planted ride but wasn’t overly plush. It holds its nose up well, corners nicely, shoots a little feedback to the pilot in hacky rocks and craves midrange hits and G-outs. Overall, it’s quite nice. Out back, we fiddled a little with the shock, setting the sag at 105mm, and hit the trail. Our main tester felt the rear end responded well to our preferred trail, with its rocks, roots, sand, some whoops and enough hack to keep you on your toes. The rear end feels light, helps make traction and doesn’t blow through the stroke on big G-outs.

AND THE FINAL THOUGHT IS…
At $9995, the TM 300FI is high-end off-road art and most definitely an acquired taste. It does everything well, but lacks any facet that would be considered great. The power is good and tractable, but it’s not KTM 300 TPI-strong. That being said, finding a bit more power doesn’t require a master’s in rocket science, and there is a whole glug of two-stroke off-road fanatics out there who demand to pilot something other than orange. The TM 300FI could fit their needs quite nicely and does it all better than most.

THE CHAMP STRIKES BACK! | TAFT NGPC | ROUND TWO