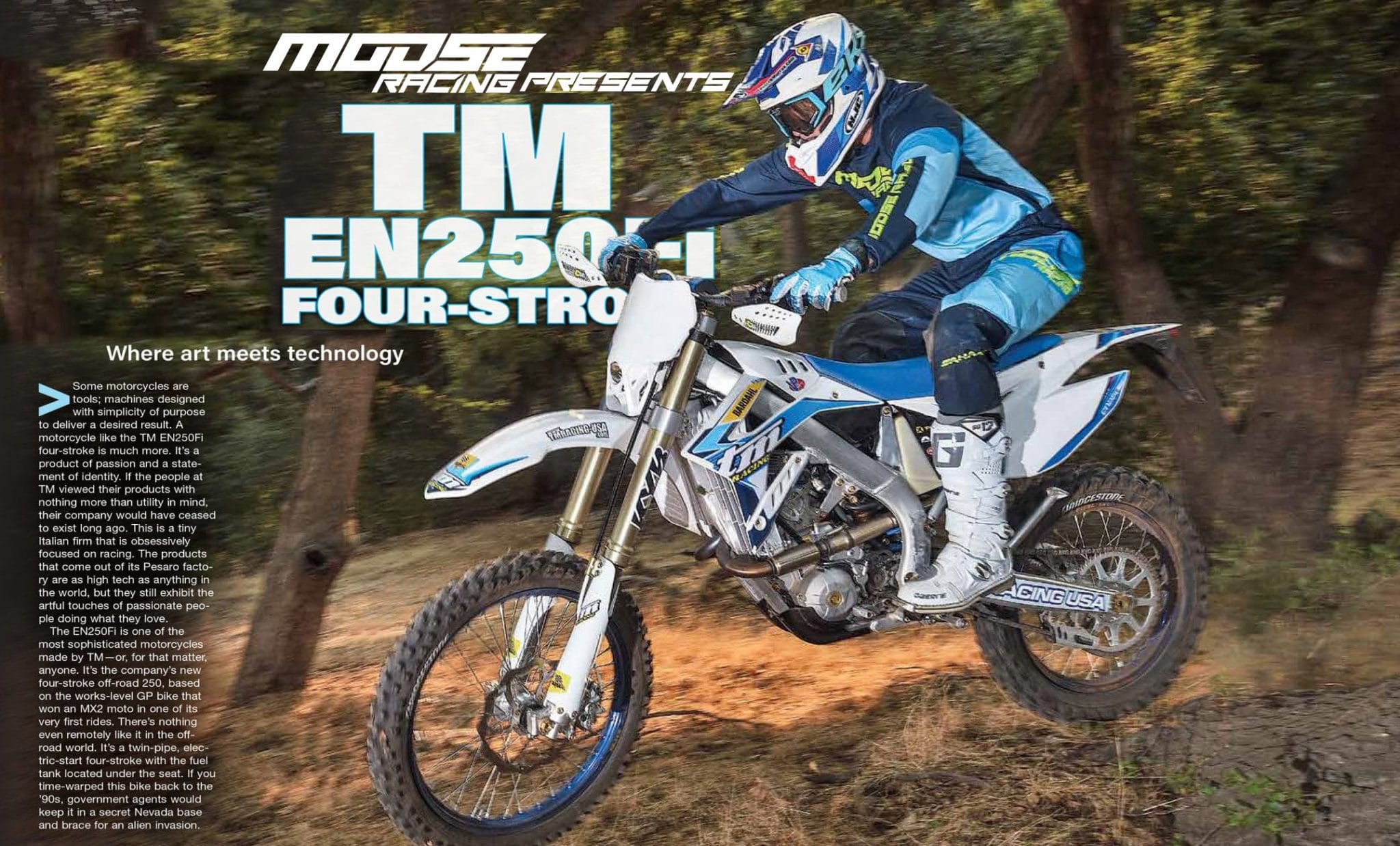 Some motorcycles are tools; machines designed with simplicity of purpose to deliver a desired result. A motorcycle like the TM EN250Fi four-stroke is much more. It’s a product of passion and a statement of identity. If the people at TM viewed their products with nothing more than utility in mind, their company would have ceased to exist long ago. This is a tiny Italian firm that is obsessively focused on racing. The products that come out of its Pesaro factory are as high tech as anything in the world, but they still exhibit the artful touches of passionate people doing what they love.

The EN250Fi is one of the most sophisticated motorcycles made by TM—or, for that matter, anyone. It’s the company’s new four-stroke off-road 250, based on the works-level GP bike that won an MX2 moto in one of its very first rides. There’s nothing even remotely like it in the off-road world. It’s a twin-pipe, electric-start four-stroke with the fuel tank located under the seat. If you time-warped this bike back to the ’90s, government agents would keep it in a secret Nevada base and brace for an alien invasion.

SPINNING GEARS
It might be presumptuous to assume that everyone in the dirt bike world already knows about TM. There are probably whole states where a TM has never laid a knobby on a track. The company isn’t run by any large, multinational conglomerate, just a handful of enthusiastic riders and engineers. Somehow, these people have not only kept up with the rapid advancement in the motorcycle world, but they have pushed the envelope at times. The 250 engine in this bike was originally designed to power a motocross bike about two years ago. It uses finger followers between the double overhead cams and the valves, which is a design that Honda and Kawasaki more recently discovered. A short chain turns clock-like gears that run the double overhead cams, which is something no one else is doing. This design is said to be more precise and allows for much easier valve adjustment and disassembly. There are two exhaust ports that lead to two independent exhaust pipes and silencers. On top, the fuel-injection system draws air from an airbox that’s located where the fuel tank usually is, a la Yamaha. Unlike with Yamaha’s design, the TM’s head isn’t reversed, and the fuel tank is mounted much lower and further rearward in the chassis. The filler is located on the right side of the subframe.

The TM frame is aluminum and looks slightly Japanese. If you look closely, however, it’s easy to tell that all the welds are done by hand. Honda, Yamaha and other Japanese companies will do this for visible welds that are out in the open, but under the frame and around the footpegs, there are a number of hit-and-miss robot welds. The TM’s welds are all perfect, even where they don’t show. There is a very odd mixture of Euro and Japanese parts sprinkled over the bike. The rear brake is by Nissin, while the front is a Brembo. The fork is KYB, and the shock is made by TM in-house. The handlebar is Neken, and the rims are Excel. Our test bike came with Bridgestone tires, but this will probably vary model by model. In some countries, this bike can be ridden on the street. It still has a horn and a number of other hints of street legality, including one of those infernal self-folding kickstands. The EN250Fi further differentiates itself from the motocross version with a six-speed gearbox.

STANDING OUT
Over the years, we’ve tested dozens of TMs. In general, they were all fast. It’s as if the factory wanted to be absolutely certain that it always won the dyno shootout, even at the expense of controllability. That’s changed. The EN250Fi isn’t explosive or hard-hitting at all. It has one of the smoothest, most linear power deliveries of any 250F on the market. It’s fast, certainly, but it doesn’t surrender manageability. The power comes on so smoothly down low that you never have to worry about stalling and then makes respectable output through the midrange. On top, it gradually tapers off. It doesn’t suddenly hit the stumble-and-miss rev limiter that signals the end of the show with most small four-strokes. How does it compare to other off-road 250 four strokes for sheer power? It’s much faster than headlight-equipped off-road models like the Yamaha WR250F and even the Sherco 250SEF but doesn’t have the top-end scream of cross-country racers like the Honda CRF250RX or the Yamaha YZ250FX. One of the interesting things about the TM’s power delivery is that it doesn’t have very quick free-rev. When you open the throttle with the gearbox in neutral, it builds rpm very gradually. That gives it a kind of natural traction control. We had the chance to race it on a super-slick grass track at round four of the National Grand Prix Championship series in Preston, Idaho, and found it has an uncanny gift for finding traction. The TM’s ignition has a map switch that allows you to further smooth out the powerband, but we never saw the need. It’s almost too smooth in the most aggressive map.

The centrally positioned fuel tank is the focus of frequent questions and concern. Is the front end too light? Does it make the bike handle weirdly? Do you have to adjust your riding style? To put it bluntly, we don’t know. The TM is an unusual motorcycle with a distinctive feel. When you ride it, you certainly have to learn and adjust, but we can’t say if the fuel-tank location has anything to do with it. It’s a very stable bike and wants exaggerated body English. The front end tracks well and doesn’t wash out. It does feel light, which might or might not be because of the low center of mass. Without fuel, the TM weighs 238 pounds on our digital scale. That’s about what you would expect. The Honda CRF250RX weighs 3 pounds less but doesn’t have a headlight, taillight or any of the TM’s buttons or switches. In racing conditions, the TM feels much lighter than the Honda. The TM is also a narrow, compact motorcycle with a very flat seat/tank junction—correction, make that seat/airbox junction.

TM’s in-house rear shock is almost completely enveloped by the fuel cell and very hard to access. Thankfully, we didn’t have to spend much time adjusting and readjusting suspension. With the sag set at 105mm, the bike was ready to race through the cornfields of Idaho. The course there consisted of the aforementioned slick track as well as a motocross course and a meandering corridor through local cornfields. It had some of the most diverse terrain you could expect in a western-style off-road race, and usually that’s a suspension nightmare. The TM performed well, all things considered. It’s soft enough to deal with the rapid chop that formed in the cornfields and still capable of handling motocross jumps. Both ends have a somewhat dead feel; in other words, there is very little extraneous movement. The fork doesn’t dive, and the rear doesn’t unload rapidly. By having such a good do-it-all setup, the TM sacrifices a little comfort on one end and pro-level capabilities on the other. Overall, though, it was perfect for our race test.

LITTLE AND BIG
It takes a little time to warm up to the TM. It isn’t a mainstream bike and requires some more personal touches. For example, it’s very difficult to shift, particularly if you have big feet. This doesn’t have anything to do with the gearbox; it’s just about having a shifter that’s too close to the footpeg. The rear brake is much more touchy than any other Nissin unit we’ve tested, presumably because of the leverage between the brake pedal and the master cylinder. The grips, the levers, the seat and even the gas cap all have offbeat designs and feels. In the end, you can either adjust the bike or adjust yourself to deal with it. When you look too closely at the little details, you can miss how impressive the big picture is.

As you might expect, the TM EN250Fi four-stroke is expensive. It sells for $11,395, making it by far the most expensive bike in its class. It’s not our place to say if your money would be well-spent here, but after experiencing the bike, we can say this: the TM shouldn’t sell for any less.