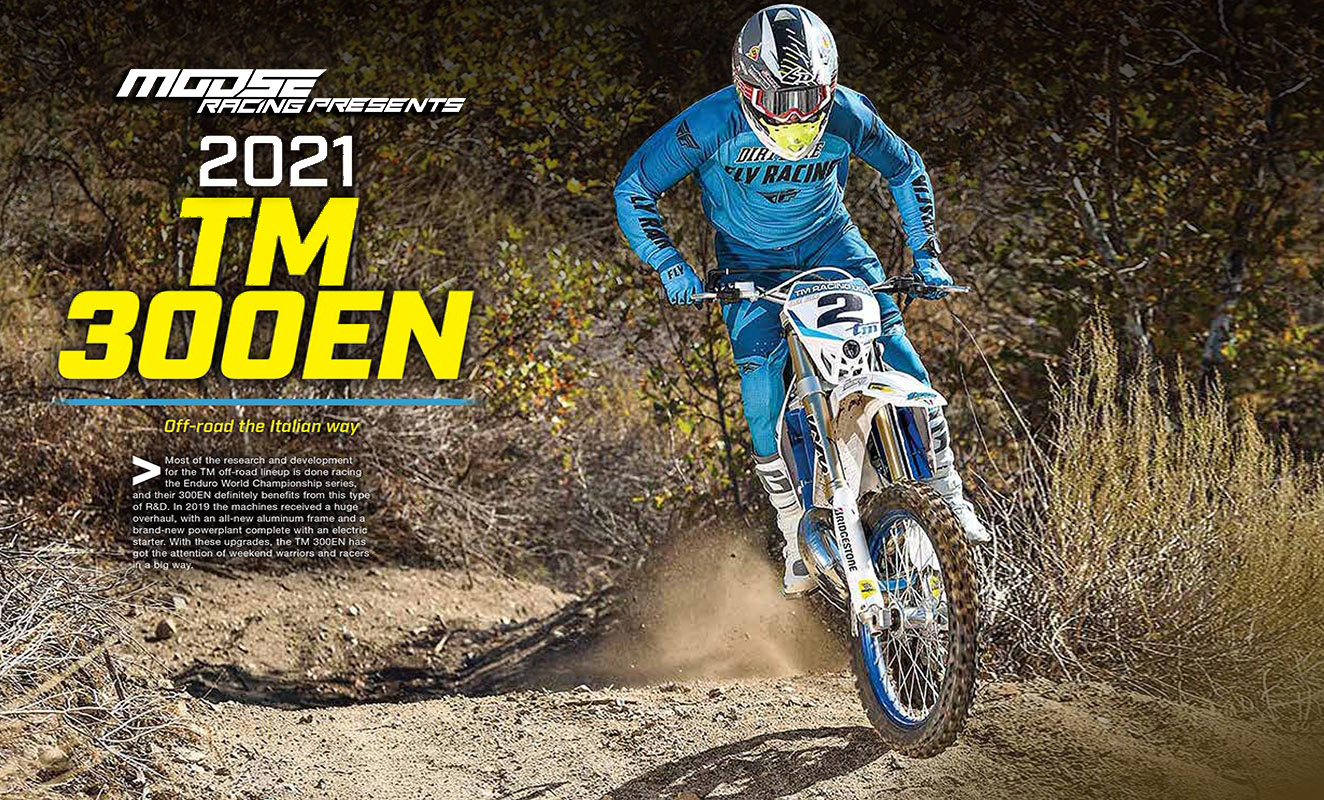 Most of the research and development for the TM off-road lineup is done racing the Enduro World Championship series, and their 300EN definitely benefits from this type of R&D. In 2019 the machines received a huge overhaul, with an all-new aluminum frame and a brand-new powerplant complete with an electric starter. With these upgrades, the TM 300EN has got the attention of weekend warriors and racers in a big way. 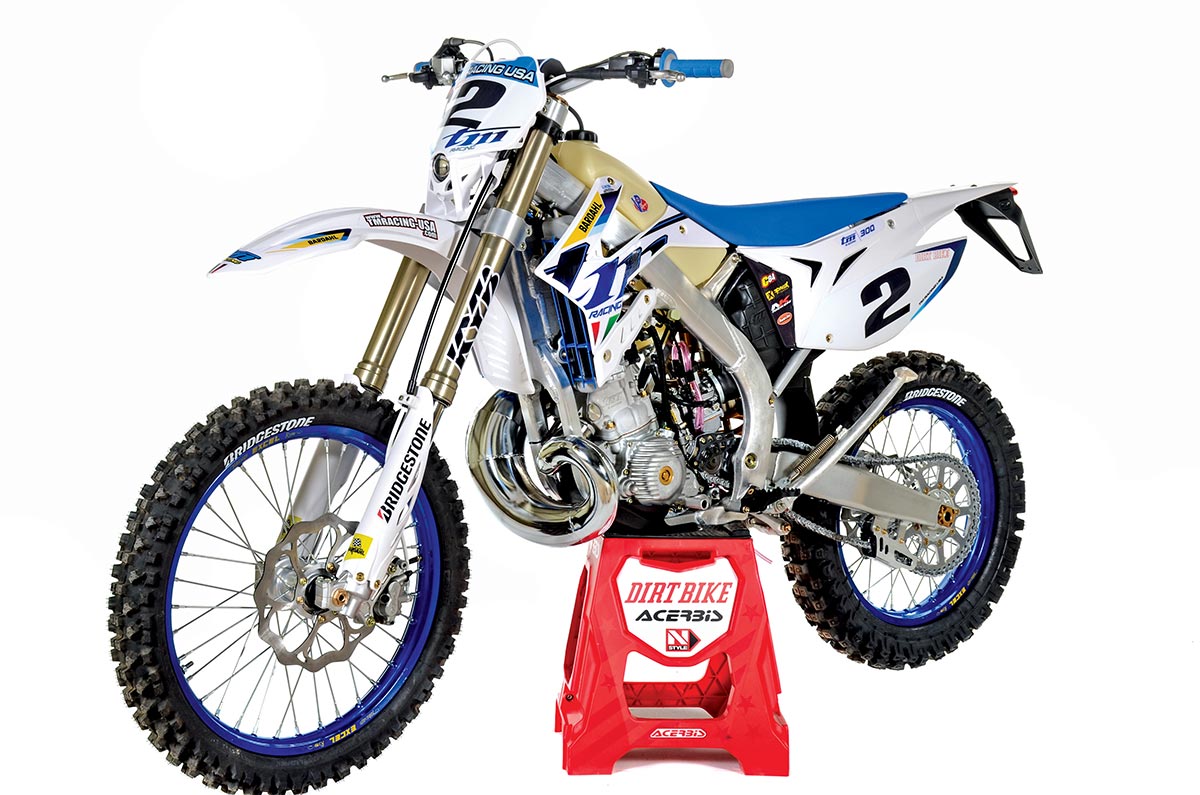 TM might be a small company, but they are setting standards in the two-stroke off-road world that some larger manufacturers are scrambling to keep up with.

THE GOODS
For 2021 TM added a sixth gear to the transmission, some minor frame changes and the U.S. importer now has more upgrade options for each customer to personalize their machine. TM USA does offer a base model, but the version in this test features upgrades available straight from the factory, or if you already have the bike, these items are also available through your local TM dealer. 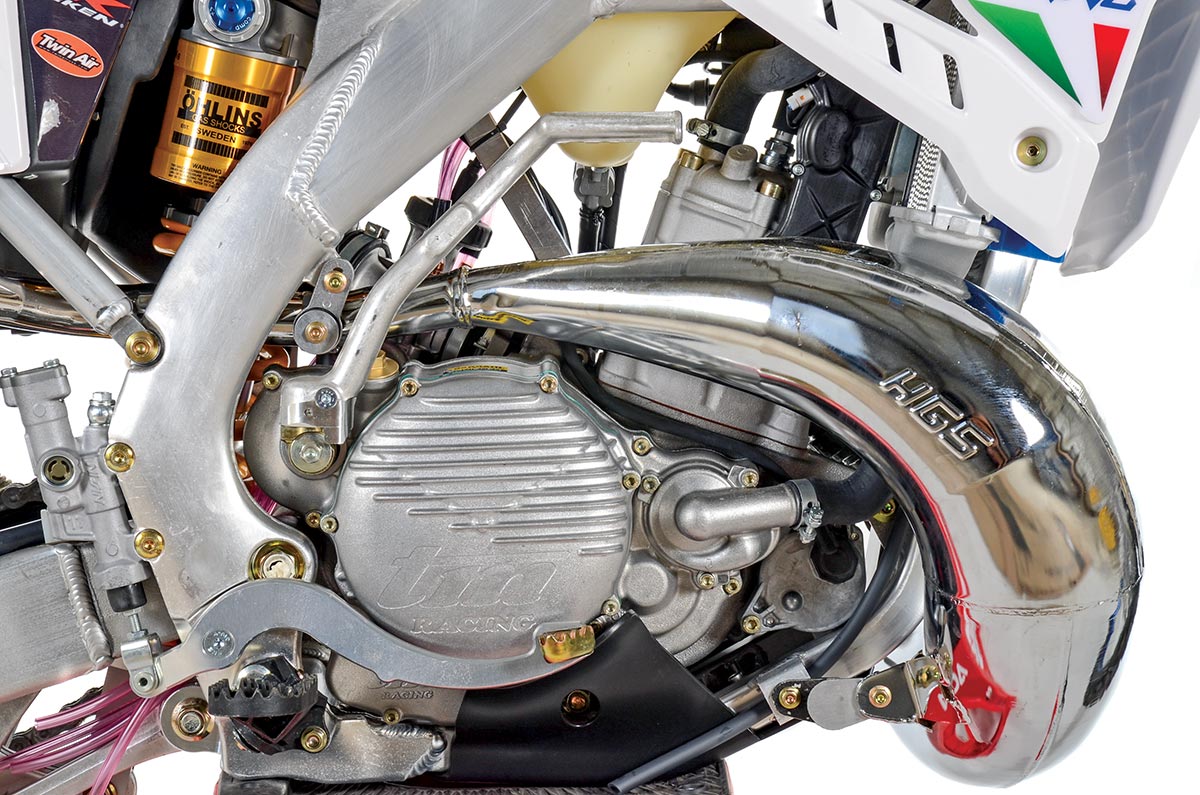 The engine is equipped with an electric power-valve system, electric starter with a manual kickstarter backup, counterbalancer on the crank, Keihin carburetor, VForce 3 reed cage, HGS exhaust system, hydraulic clutch using Brembo components and a 6-speed gear box using a gear sensor that changes mapping designed specifically for each gear. We have seen similar systems on four-stroke MX models, but this might be a two-stroke first. All these items come standard, and the unit here has an optional radiator fan kit and racing wiring harness with a handlebar-mounted map switch that allows on-the-fly adjustment between two pre-programmed factory maps, but internally, the powerplant is OEM. 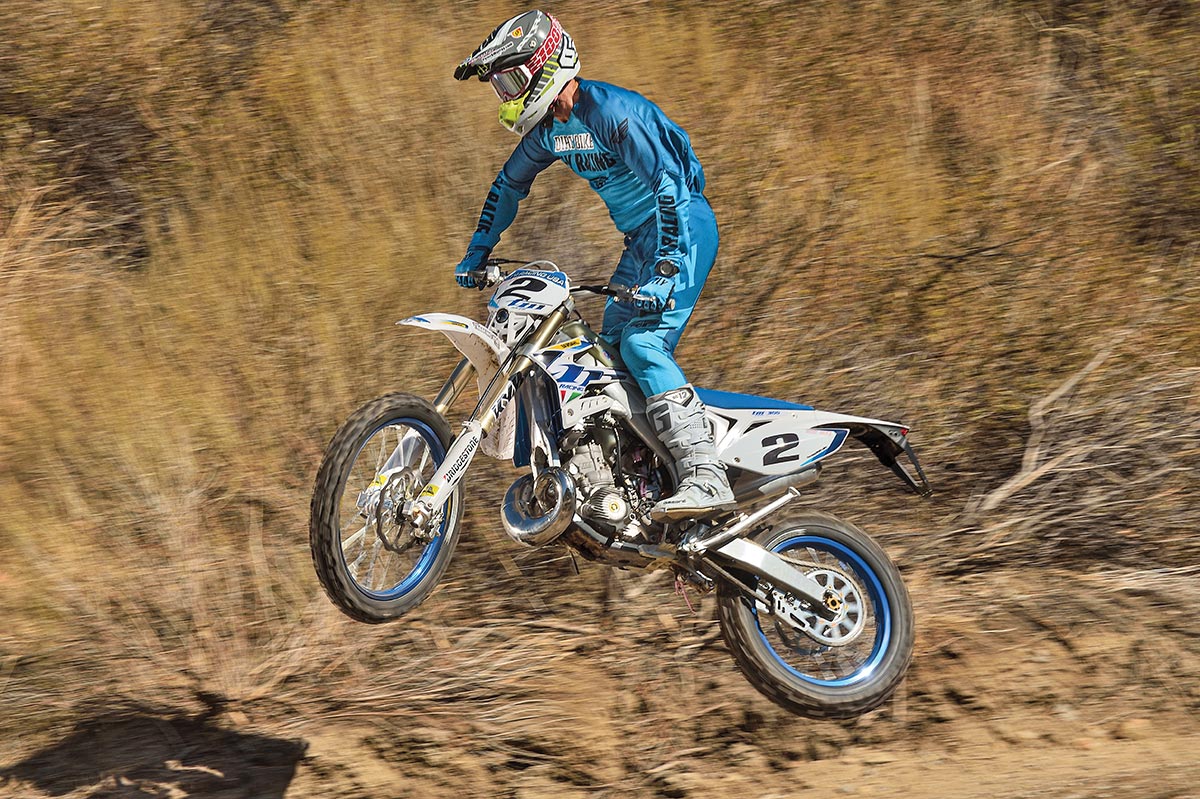 Using a 50/50 mix of pump and race gas recommended by TM USA, the 300EN produces smooth, predictable power from almost a dead stop and keeps making the same type of power through the midrange. For a 300cc off-road bike, it even makes good power on top—although, it does fall off rapidly and short-shifting is recommended. It makes good power, but definitely not what we would call a rev monster. The new 6-speed gearbox produces tons of top-end speed comparable to just about anything on the market today. Third gear in the stock gear configuration is a bit too tall for the average trail speed, and we found ourselves either using the clutch a lot in third or trying to rev it too high in second gear. 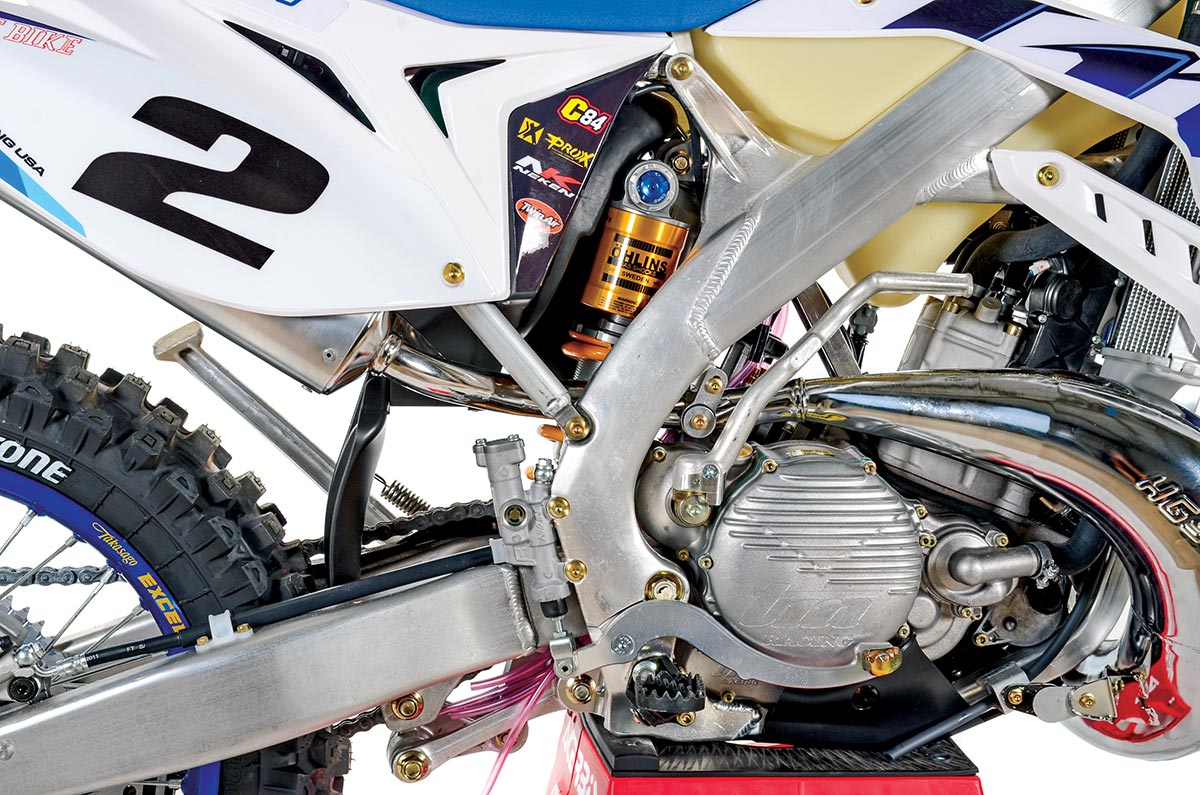 The Ohlins rear shock is an upgrade exclusively available from the TM factory in Italy, and it’s worth it.

Chassis-wise, our test model features an aluminum frame, KYB fork, Nissin rear brake, Brembo front brake, machined aluminum hubs and blue Excel Takasago rims, which are all standard. An Acerbis larger fuel tank, Ohlins rear shock and a flatter bend of Neken handlebars are a few upgrades available straight from the TM factory. The only upgrade not available straight from the factory on this unit are the Bridgestone tires; this is a decision of the U.S. importer. We have tested this general setup before and had some issues with the standard shock.

For 2021, the optional Ohlins shock upgrade was placed on our test unit. It took some dialing in, but it ran around 103–105mm of rider sag, and the overall handling was more predictable and stable than in years past. The bike tends to have a bit of a rear-end-high feel, so the lower we got the rear, the more comfortable we felt overall. TM USA does have lowering links available, although we did not get a chance to test them. 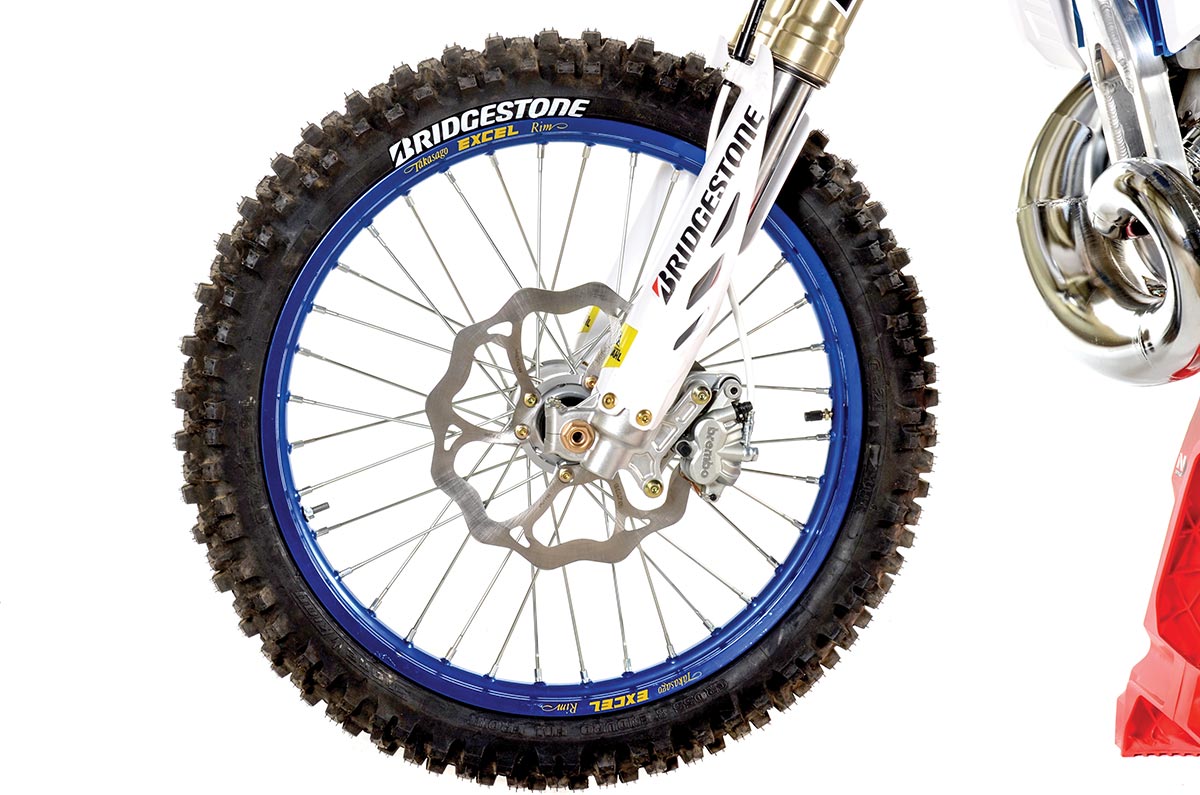 The front brakes use Brembo components and our test unit was outfitted with Bridgestone tires.

BOTTOM LINE
The first question you are probably asking is, why are we wasting time testing a 2021 TM 300EN carbureted version and not testing the fuel-injected model? Well, you might be surprised, but not everyone is sold on the fuel-injected two-stroke philosophy. One of those people being TM USA’s importer, Ralph Schmidt. He claims to sell nine carbureted units to every one TPI model. He also stated that because some European manufacturers no longer offer carbureted models, their riders are turning into loyal TM customers. Let us reassure you, the carburetor is alive and well, and the 2021 TM 300EN proves it.

Bottom line is, this machine is a great foundation for any type of off-road riding or racing. Yes, you need to dial it in for your specific needs, gearing and suspension, but it has all the tools you will need—smooth power delivery, high-quality components like a Kayaba fork, Ohlins shock, Brembo hydraulic clutch, Nissin rear brake, V-Force reeds, Excel rims and machined billet-aluminum parts throughout the machine. Add some custom options, like a larger fuel tank, radiator fan kit and racing ECUs to the package, and things just get better. TM is a small company in Pesaro, Italy, but the 2021 TM 300EN is a huge player in the 300cc off-road world.