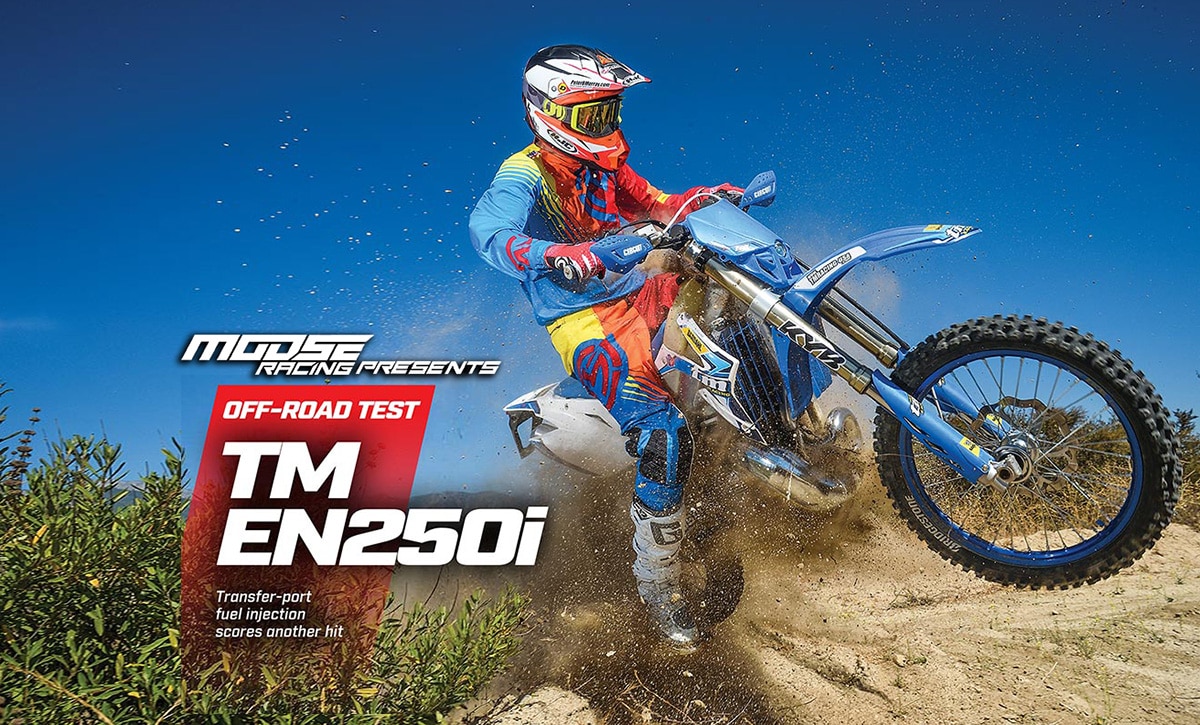 Fuel-injected two-strokes are here to stay. Now, there are three manufacturers offering transfer-port-injection two-strokes in the U.S., and there are more to come. Here’s the fun part: not all of them are owned by KTM’s parent company. TM is a small Italian company that has proven itself capable of matching any motorcycle company in the world in terms of technology and innovation. The TM EN250i 2T is actually the most sophisticated two-stroke available. Just look at the facts: the TM is an off-road two-stroke with TPI fuel injection. It also has a counterbalancer, electric start, an electronic power valve, a digitally programmed ignition with different maps for different gears, an aluminum frame and more. TM is not a footnote in the exotic motorcycle category anymore. It’s a force that’s shaping the motorcycles of the future.

YOU SAID TM, RIGHT?
At one point, any mention of TM had to come with an explanation that it wasn’t a vintage Suzuki or a KTM with a typo. By now, you really should know that the company is a small business out of the Marche region of Italy that has amassed an impressive resume of world titles in off-road racing, Supermotard and kart racing. TM’s line includes almost 30 motorcycles, but the off-road two-strokes have become the mainstay of the company’s success here in the States. Last year the 250/300 motor was redesigned with a new five-speed gearbox and an integrated counterbalancer. The bike already used an electronic power valve similar to the one that Honda used on the final version of the CR250R. Back then, Honda engineers claimed they had just scratched the surface in the development of that design, but then dropped out of the two-stroke business. TM, on the other hand, has been refining the concept for years now. The current version has done away with all the wonky cables and the remote electric motor. The workings are now connected directly to the right side of the motor. 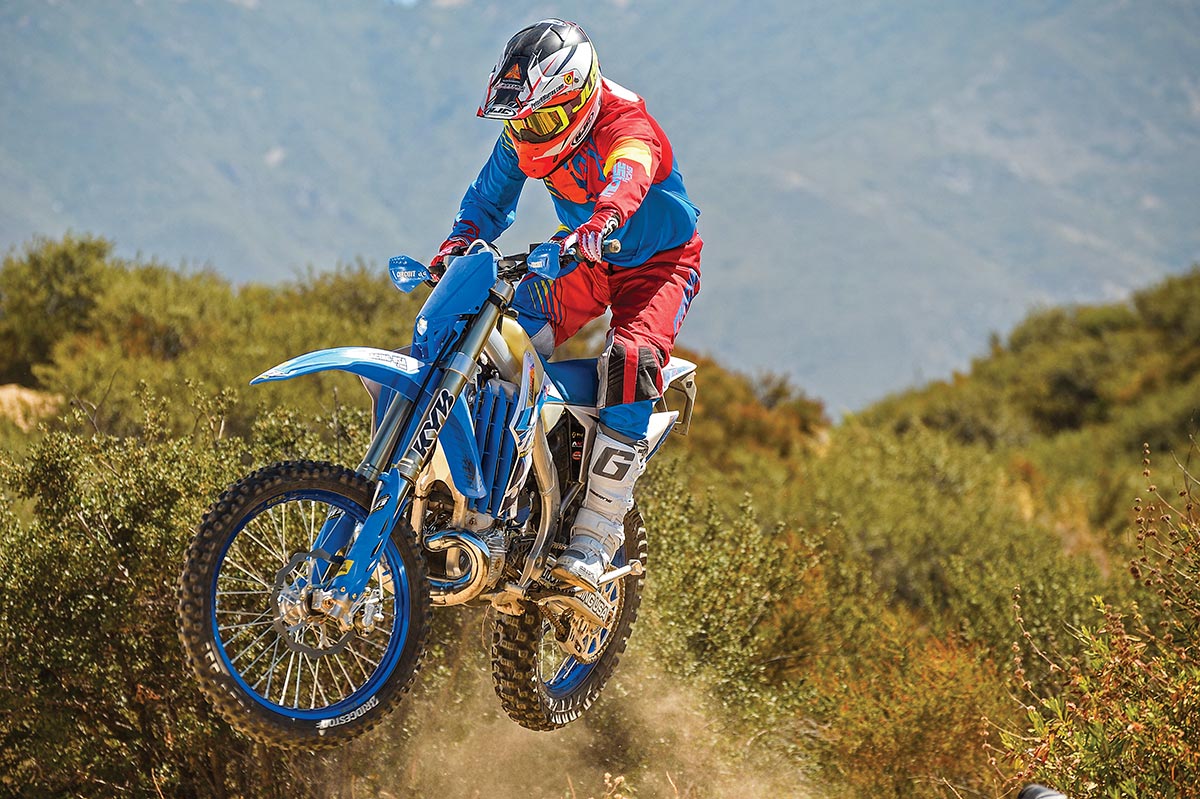 In last year’s redesign, TM was thinking fuel injection, even though the 2019 version was still carbureted. Now, the TPI version also introduces oil injection with a reservoir incorporated into the right frame rail. There’s a little sight window in the frame, so it’s easy to check before each ride. The injection system itself is very different from KTM’s and uses none of the same suppliers, although the principle is the same. The throttle body meters nothing but airflow; oil is injected into the stream as it enters the Moto Tassinari reed valve. The fuel injectors don’t come into play until later, just before the charge enters the combustion chamber. The main benefit is that the TM can be homologated for street use in Europe. That requires a number of other measures that restrict performance, but none of those are incorporated in the U.S. version. This bike does, however, have a horn and a number of other dual-sport items.

In the chassis department, the TM is unlike anything else from Europe. The frame layout uses twin-aluminum beams, whereas almost everything else from “over there” uses a more old-school steel backbone frame. This isn’t new for TM engineers; they have been developing this design for over 10 years. The fork is a KYB, and the shock is made in-house by TM. The brakes are also mixed; there’s a Brembo in front and a Nissin in the rear. Bars are Neken, rims are D.I.D. and the hubs are TM—all high-end, top-quality items.

CIAO, BABY
The most striking impression you get when you first ride the TM is that it’s super smooth. The power delivery is gentle and linear. This isn’t what we historically expect from TM. In the past, the power hit hard, and TM’s peak power number was generally a tick higher than anything else in the class. The new 250 actually feels mellow and sweet. Fuel injection has a history of this; the same reports were common in the early days of four-stroke EFI. This means the traditional two-stroke reluctance to stall is even more pronounced. The TM is virtually unstoppable at low rpm. Above that, even though the power isn’t spiky or thrilling, it still has depth through the midrange.

When you put the bike under a big load in soft soil or climbing a steep hill, it pulls like it’s on flat, level ground. Does it have the same peak power as the carbureted version? TM says it has more, but we wouldn’t swear to it. The bike doesn’t rev especially high, forcing a shift-early riding style. It does have an A/B map switch on the handlebar, but there’s very little use for the milder of the two options. It kills revs even more.

Like the TM 250 motocross bike that was in our 250 two-stroke shootout last month, the EN250i has a long, stable feel. The bike’s handling manners actually match its power delivery—smooth and easy. Nothing surprises the rider. You tell it the line you want, and the TM listens. The suspension probably contributes to this. It’s plush without generating too much dive. The KYB fork has become an off-road industry standard. It doesn’t have the exact same feel as the KYB on a Yamaha off-road bike, but that’s not too surprising. There are a number of proprietary differences, but the TM feels good nonetheless. The rear suspension has a feel all its own—very little extraneous movement or even feedback. Once again, we wouldn’t necessarily call it a bad feel, just different.

PROS AND CONS
There’s a lot to love about the TM. There are a few things not to love as well. It still has a kick-starter—that’s good. Not that we distrust electric start, but we do distrust batteries, lithium or otherwise. The oil-injection system is not very thirsty. We kept thinking that someone else was topping it off. Turns out it simply doesn’t use much oil. We also love the concept of different maps for different gears. TM reports that the maps for first, second, and third are smoother and more aggressive in fourth and fifth. In practice, we couldn’t really feel much difference. It would make more sense to have a special, super-mellow map for first alone. The 5-speed is an odd choice for an off-road two-stroke anyway. It’s set up with fairly tight ratios until it gets to fifth, which is an overdrive. We understand that the 2021 model will have a 6-speed.

The brakes are strong, the hydraulic clutch is flawless and the LED headlight is fairly powerful for its size. All the parts have a quality feel. But, we do have complaints. It could use a radiator fan. All off-road bikes need them. The importer recommends race gas, which is a burden. Even so, there is some pinging under big loads at low Rs. We also believe that all off-road bikes should have a spark arrester, and yet very few do. And oh, yes, it has one of those infernal self-folding kickstands. All small complaints, but that’s all they gave us to work with.

At the end of every TM test there used to be a special place reserved to complain about the price. We can certainly do that here. The EN250 Fi 2T has a suggested retail of $9795. It’s just that nowadays other motorcycles have come up into TM territory. A Husqvarna TE250i is $9899—all the more reason to consider TM a mainstream brand. If TM is still a cult, maybe we should all be members.