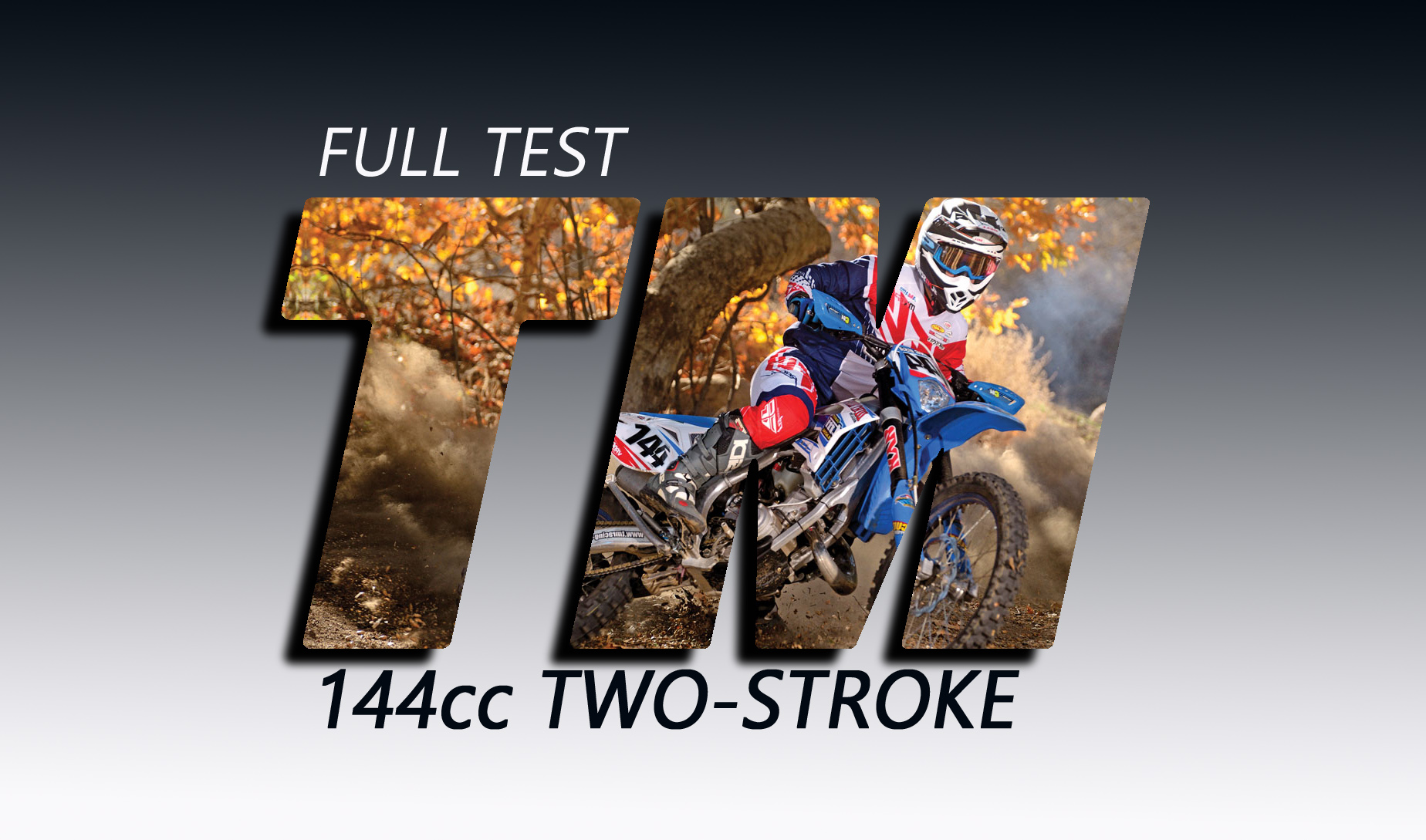 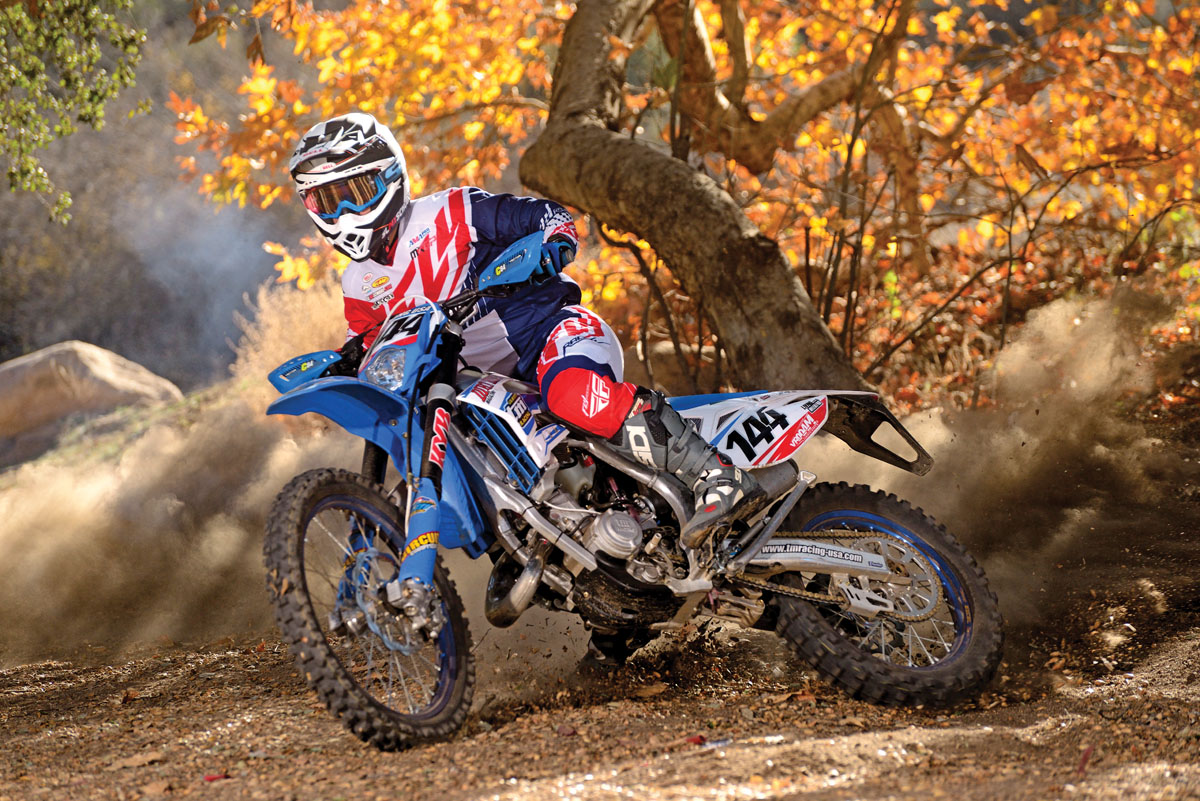 You’ll probably never ride this bike. Never mind that; you’ll probably never even see one—or meet anyone who has. And that’s a tragedy. The TM Racing 144EN is made for a very small demographic—a sub-cult of a minority. The only reason it exists is because tiny markets are what TM does best. This is a small Italian company that builds a small number of products to fill small gaps. The good news is they are all hand-built motorcycles made to a very high and somewhat artistic standard. The bad news is that they are built to a very expensive standard.
In this case, the target is the older off-road rider who likes small-displacement two-strokes. As we said, a sub-cult of a minority. On top of that, TM Racing builds exactly what its name says: racing motorcycles. In the U.S. there’s no distinct class for a 144cc two-stroke in off-road racing. The TM 144EN is a very capable machine, though. And even though there’s no class specifically for it, there’s virtually no class it can’t enter, either.

WHY A 144?
Years ago, when two-stroke-versus-four-stroke battle lines were being drawn, there was a period when the 144cc two-stroke was considered a good match for a 250cc four-stroke. There are probably some organizations somewhere that still group those bikes together. Back then, most 125s could accept a 4mm increase in bore, and that added up to 144cc. The problem was that the resulting piston was too heavy and that affected revs in a bad way. TM approached the problem by designing a whole new motor with a larger bore and stroke (56mm x 58.2mm). That made it 143.3cc in displacement; close enough.
Although in time the 144 was abandoned by almost everyone else, TM continued to develop the motor. Two years ago the company introduced EES, which apparently stands for Valvola Scarico Elettronica. We don’t really understand that, either, but in any language, it’s an electronic power valve. The ignition powers a servo motor that opens and closes the valve via two short cables. This is the technology that Honda employed in the last years of the CR250R. Had the CR lived on, it would probably have turned into something like this. The big advantage of a digitally controlled power valve is that it opens gradually, not all at once like a conventional ball-ramp mechanism. There are rpm zones where the TM holds the power valve halfway open.
Otherwise, the TM 144 is much like the old-school two-stroke motors that we all know so well. It has a case-reed, a six-speed gearbox and a digital Kokusan ignition. What makes it different is that it is manufactured in such small quantities that the engine cases are sand-cast with a very rough finish. The TM chassis is also a standout. It’s the only aluminum frame to come out of Europe on a full-fledged dirt bike. Many people say it looks like a Honda frame until they get a closer look. The TM has welds that are much cleaner than those of any mass-manufactured bike. There are a number of CNC-machined parts, including, of all things, the rear shock. The fork is a 43mm KYB, and the brakes are an odd mix of Brembo in the front and Nissin in the rear.

HOW FAST IS IT?
The TM 144EN has peak power that can match any 250F on the market. It’s true. A good rider can make his buddies on four-strokes wonder why they are carrying around all those cams and valves. As you might expect, though, the 144’s peak power comes and goes very quickly. It hits hard and signs off early, and that puts most of the work on the rider. You have to know when to upshift, when to downshift and when to use the clutch. That’s okay; you probably knew what you were signing up for. What you probably didn’t expect is that the TM can be ridden at very low rpm too. If you’re familiar with fast 125s, you know that low revs are usually the kiss of doom. If you’re a gear too high on many of them, they actually go slower with too much throttle. The TM 144, on the other hand, has an amazing ability to pull itself back into the happy zone. If you find yourself in an ugly hillside situation with your feet flailing nowhere near the shift lever, don’t panic. As long as you keep the throttle cracked open, the bike will stay alive, and so will you.
On easier, high-speed trails, the TM makes you feel like a hero. When you ride it, you feel like you’re stronger, faster and a little smarter than you really are. There’s no secret here; it’s all about a lack of weight. On the exacting Dirt Bike scale, the bike weighs 211 pounds without fuel. It’s the lightest full-size off-road bike currently imported to the U.S. Its closest rival is the Husqvarna TE125, which is about 5 pounds heavier. Comparisons with the Husky are inevitable because the TE is the only other bike that might be cast into the same role, bur they are actually very different machines. The TM’s advantages are that it’s faster, lighter and has more race-oriented suspension. The Husky’s biggest trump cards are that it’s easier to ride and less abrupt.
The TM’s suspension is very good, even on a motocross course. The KYB fork isn’t that different from the one used by Yamaha on the YZ125. It doesn’t bottom on hard jumps, yet it’s still fairly plush in rock. The rear end feels just a little softer than the front but still doesn’t bottom hard. We still find it hard to believe that the same company that makes fast engines and beautiful frames can find the time to build its own shock. Clearly, there are some talented engineers at TM.

LITTLE STUFF MATTERS
You can spend a lot of time marveling and wondering about tiny details on the TM 144. There are nine bolts that hold the rear sprocket on. Why nine? The rear brake lever looks like it was crafted by a machinist with a lot of time on his hands. Same goes for the triple clamps, the swingarm and the kickstand. But be warned, the kickstand has that infernal European tendency to fold up on its own. You also need to know that the TM isn’t an especially cuddly bike. It has a hard seat, solid-mounted bars, a stiff clutch pull (even though it’s hydraulic), and we suspect a very rigid frame. It’s the kind of bike that wants its rider to be tough and talented.
We’re fine with all that. On our best days, we feel tough. And when we ride bikes that are this fast and this light, they make us feel talented too. It’s like the TM helps bring you up to its level.