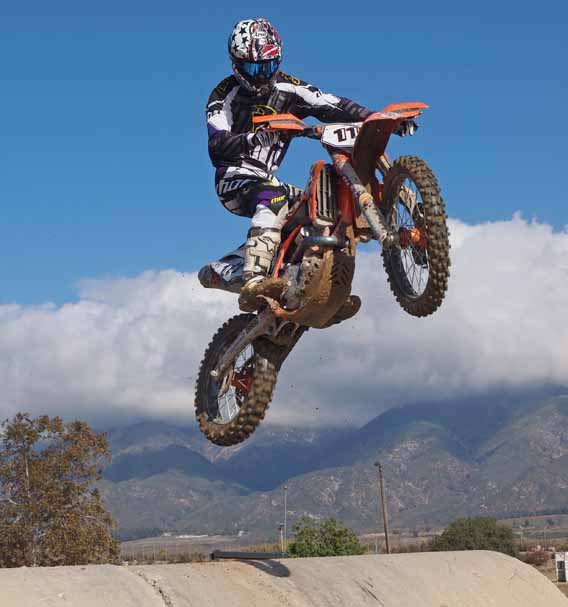 After a year of tugging at the shirts of the boys at KTM and nagging them to let me ride Taddy BlazusiakÃ¢â‚¬â„¢s EnduroCross 350SXF, I finally got my first chance to ride a Ã¢â‚¬Å“factoryÃ¢â‚¬Â race bike. We met up withÃ¢â‚¬Ë†KTM at Glen HelenÃ¢â‚¬â„¢s EnduroCross track just a few days after Taddy won his third consecutive EnduroCross title in Las Vegas. I requested they bring the bike straight from the race, unwashed, just as Taddy had ridden it less than 48 hours earlier. They were more than happy to oblige; it meant one less bike to wash after the race, after all.

TaddyÃ¢â‚¬â„¢s machine starts out as a KTM350SX, but thereÃ¢â‚¬â„¢s not much left of the stock bike once the factory mechanics are done with it. Because Taddy rides for Factory KTM, his bikes come straight out of KTMÃ¢â‚¬â„¢s headquarters, receiving parts only a few riders are lucky enough to enjoy.

The first step for any factory bike is to shed weight, and TaddyÃ¢â‚¬â„¢s 350 is easily 8 pounds lighter than a stocker, if not more. The team saves 2 pounds by changing one common part. (We arenÃ¢â‚¬â„¢t allowed to tell you about this trick; itÃ¢â‚¬â„¢s a factory secret.) The titanium subframe saves over a pound. All the hardware bolts are also titanium, and the Akrapovic titanium exhaust system saves over 2 pounds. A Super B battery knocks off close to another 3 pounds, and the Kite hubs are lighter than stock. Taddy would run titanium axles, but they donÃ¢â‚¬â„¢t hold up to the abuse he administers. Taddy bends a stock rear axle every race and goes through a set of shock linkages every race too. There is a rumor that he might be back on PDS suspension next year after some more testing. The front forks are big (52mm WPs) and are lighter than the stock 48s thanks to aluminum lugs and trick internals. The factory Xtrig clamps are not available to the public, and Taddy prefers an 18mm offset. The shock is Factory WP, with the stock linkage and a steel spring. Taddy has used titanium springs in the past, but he likes the feel of steel better. The engine comes straight from the Austrian headquarters. The transmission is stock with stock ratios, but that is about where the stock parts end. The crank is modified, and then everything above it gets the factory race-team treatment. If you ask a mechanic what has been done, the standard response is, Ã¢â‚¬Å“Factory race-team modifications.Ã¢â‚¬Â The engine work and mapping are all about instant, smooth and strong power to get Taddy up and over anything in his way.

One of the most important elements on an EnduroCross bike is the tires. When the EnduroCross series originated, many guys chose to run trials tires because they hooked up on any surface. Trials tires havenÃ¢â‚¬â„¢t been allowed for years, so guys have gotten creative; many use very soft mousse inserts and tubeless systems to emulate low air pressure. Another common practice is to cut the knobs on the tires to offer more flex. Taddy uses Metzeler Six Day tires with mousse inserts. The team wouldnÃ¢â‚¬â„¢t release any information about modifications done to the mousse or the tire compound, but TaddyÃ¢â‚¬â„¢s rear tire is very soft and is close to being a trials tire without being a trials tire.

When we rolled onto Glen HelenÃ¢â‚¬â„¢s EnduroCross track, it was all mud and puddles thanks to a hard-hitting storm the night before. The thought of riding TaddyÃ¢â‚¬â„¢s bike when conditions were perfect made me nervous, but negotiating an EX course covered in mud and puddles had me flat shaking in my boots. Thankfully, the only people watching were TaddyÃ¢â‚¬â„¢s mechanic Miguel, Jade Dungey (BrownÃ¢â‚¬â„¢s mechanic) and Ron Lawson, who is used to seeing horrible carnage when IÃ¢â‚¬â„¢m on a bike.

Because I wanted the full-factory-machine experience, I rode TaddyÃ¢â‚¬â„¢s bike exactly as he raced it, without adjusting the levers, bars or brake pedal. His setup is fairly normal, if you donÃ¢â‚¬â„¢t count the high brake pedal and his weird clutch and brake levers, which he bends up so that they have a skyward swoop. Dungey told me he does it because Taddy broke his wrist awhile back and holds the bars at a funny angle. Apparently, itÃ¢â‚¬â„¢s easier for him to pull the clutch lever with it swooped up. Dungey also warned me that TaddyÃ¢â‚¬â„¢s suspension is very stiff, almost Supercross-stiff. After hitting the start button and letting the bike idle, I cranked on the throttle tube. It twisted easily. The motor revved up quickly and came back to idle just as fast. TaddyÃ¢â‚¬â„¢s ECU mapping is done in-house with factory settings only available to the factory race team. I warmed up by just riding around, feeling the intense snap of the bottom end. I was amazed at the braking power. One-finger nose wheelies didnÃ¢â‚¬â„¢t require much pressure on the lever, and Jade Dungey told me that even his brother Ryan doesnÃ¢â‚¬â„¢t run the Factory Brembo setup as powerful on his KTM 450SX. The pull at the lever of the Hinson clutch was very easy, but with positive engagement. As a world trials rider, Taddy is very particular about his clutch setup and wants it to modulate easily. All my anxiety about riding TaddyÃ¢â‚¬â„¢s bike quickly roosted away as I became a kid playing in the dirt. His bike did everything right, and the motor was heaven. The delivery was super smooth, and the more I twisted the throttle, the harder it pulled. With the tire setup, the stiff suspension didnÃ¢â‚¬â„¢t deflect through the rocks or over the logs. The squish of the tire worked as the initial suspension travel, and, try as I might, I could never get the suspension to bottom out, even with big, flat landings. TaddyÃ¢â‚¬â„¢s forks have a very quick rebound, while the shock is super slow on the rebound, almost dead. Taddy slams into the logs on an EX course wide open, never lifting on the throttle, so he wants the back of the bike to stay down and not kick.

After just a little time, I felt completely comfortable on TaddyÃ¢â‚¬â„¢s bike. And with the weight savings, it felt nothing like a stock 350; it felt like a 250F with an amazing motor. A lot of the weight the factory takes off is up high, which makes the bike feel even lighter than it is. For me, the factors that made TaddyÃ¢â‚¬â„¢s bike so easy to ride were the tires and the way the tires were set up. IÃ¢â‚¬â„¢ve never seen a rear knobby so soft and squishy. The density of the rubber felt like a trials tire. I was able to ride up and over muddy logs and wet rocks better with his tires than I could with a regular knobby if the terrain were dry. In tacky dirt and sand, the tires hooked up amazingly well. IÃ¢â‚¬â„¢m not positive what he had going, but IÃ¢â‚¬â„¢m on a mission to get my tires the same way before my next EnduroCross race.

I quietly questioned why Taddy left behind his two-stroke for the bigger, heavier four-stroke for 2011, and now I know why. His 350 is amazing, and the friendly and controllable instant response is hard to match. After spending a few hours on TaddyÃ¢â‚¬â„¢s bike, I may have a hard time riding a non-factory bike without constantly dreaming of the orange ripper. For EnduroCross, it was the best bike IÃ¢â‚¬â„¢ve ever riddenÃ¢â‚¬â€even at my older-guy vet level. Taddy could probably win on a stock machine, but his bike enhances his already-amazing ability. o