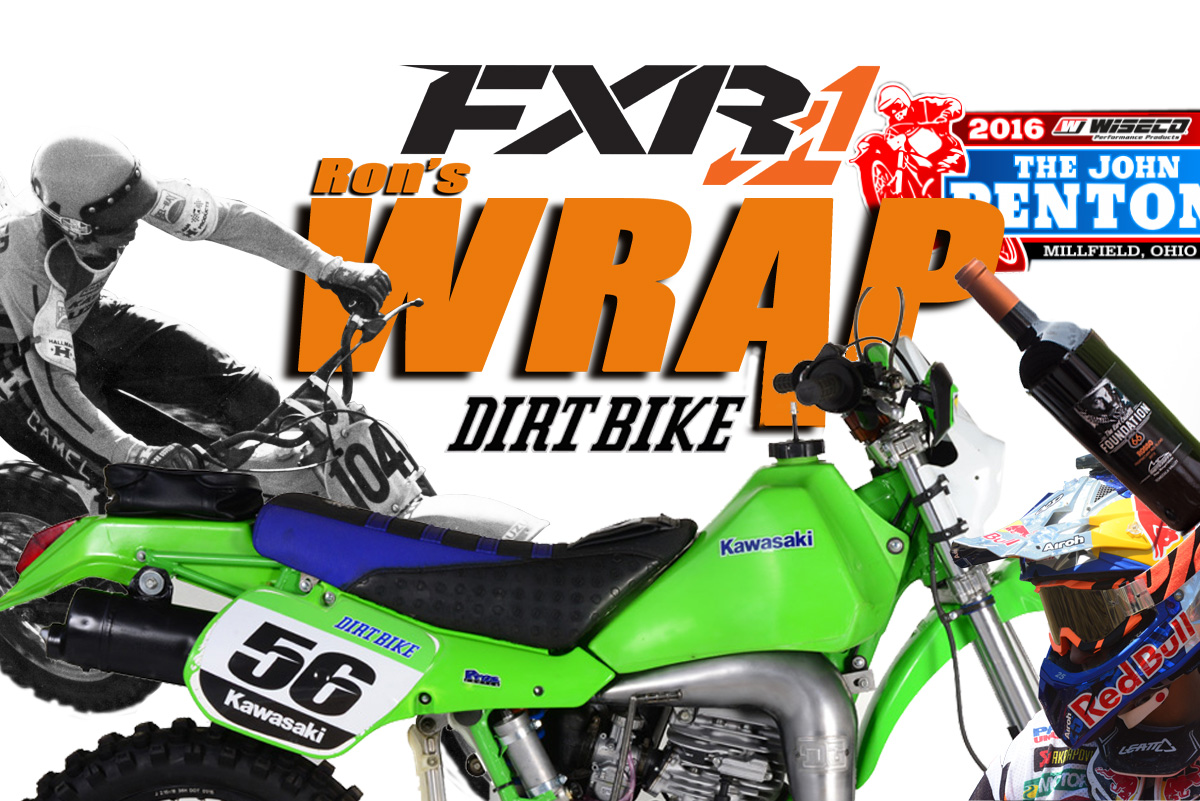 Glen Helen had the press day for this weekend’s Lucas Oil Pro Motocross Thursday. The track looked spectacular. Lori Wilson, the General Manager at Glen Helen, is a close friend, and the course was designed by Motocross Action’s Jody Weisel, another good friend. So this is a big weekend for us all. The track was dominated by two big will-they-do-it triple jumps. The first is right where the track joins the start straight. The other is on the far side of the track. I’m not sure if anyone cleared either. Local pro Brett Hottel might have been trying to clear the back one, but I’m still not sure. He landed in the worst possible spot and demolished a wheel. He declined the ambulance ride, so I think he’ll be fine, but no racing for him. Here are some images from the day.

On May 29th, the Erzberg Rodeo will take place for the 22nd time. It was at this race that Taddy Blazusiak broke into the spotlight back in 2007. I was there, shot this photo of someone who I assumed just wandered on to the course. I wasn’t the only one who had no idea who he was. This year, American Colton Haaker will be going there for the first time.
Colton Haaker: “It’s going to be the first time I’m racing Erzberg and I’m really looking forward to the challenge. The Red Bull Hare Scramble is probably the biggest and hardest single day event of the year and I’ve always wanted to give it a go. I’ve spent the last couple of months training hard for this event, trying myself in the gnarliest and most extreme stuff. I’ve also spent a decent amount of time getting used to my 300cc two-stroke bike, which for sure is the right tool for the event. I think the key is to learn how to find your way out of the most extreme stuff in one piece and without burning your body out. I know it’s going to be different to anything else I’ve ever done but I’m ready for it.”

FURTHER BACK IN THE DAY 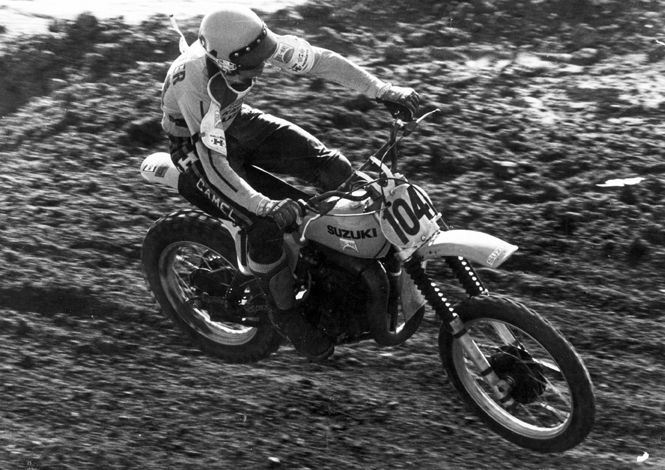 I knew exactly who this was when I shot him at the Saddleback Trans AMA in 1976. I idolized Roger DeCoster at the time. Years later I would work with him at Dirt Bike Magazine. That was one of the more offbeat chapters in Roger’s diverse career. He was the Executive Editor at DB from 1993 to about 1999. It was a real full-time position, not some honorary title, and he worked hard at it. He technically wasn’t an editor, of course, because English wasn’t his native tongue–it was my job to help him in that regard. But he set the agenda and made our testing program his number one priority. Over the years, I’ve met many of the heroes of my youth. Roger was one of the few who deserved being one. 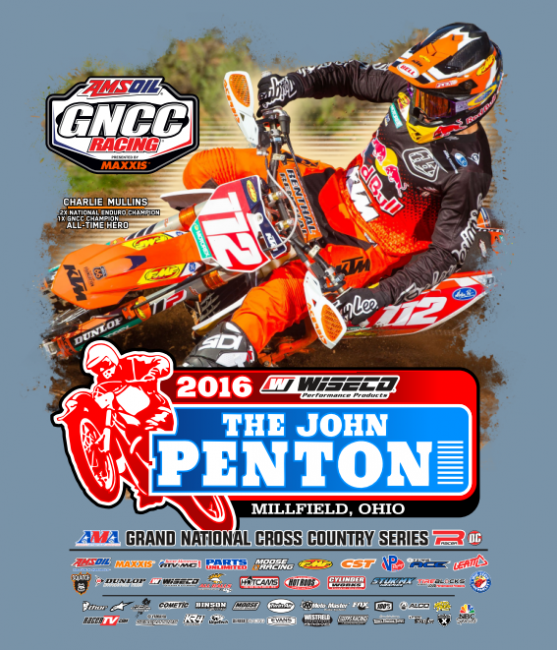 Racer Productions and the AMSOIL GNCC Racing Family is pleased to celebrate the racing career of FMF KTM Factory Racing XC1 rider Charlie Mullins this weekend at the 27th Annual Wiseco John Penton GNCC at Sunday Creek Raceway in Millfield, Ohio.
Earlier this season Mullins made the painful decision to retire completely from racing as a result of complications from a double wrist injury sustained during a practice ride in the May of 2014. “My right wrist just isn’t healing the way it needs to be to compete at this level. I needed to think about my future and my family,” said Mullins.Mullins and his teammates Kailub Russell, Kacy Martinez and Russell Bobbitt will meet riders at the finish line area to award each Youth motorcycle racer with a finisher medallion upon completion of their race. The FMF KTM Factory Racing racers will be present during the podium celebration and each Youth racer that lands on the podium will get a photo taken with the factory riders. As the featured rider on the official event souvenir t-shirt, Mullins will also be on-hand to sign autographs at Moto Tees. And the boys at Racer TV will have a microphone with his name on it for Sunday’s premiere pro race. 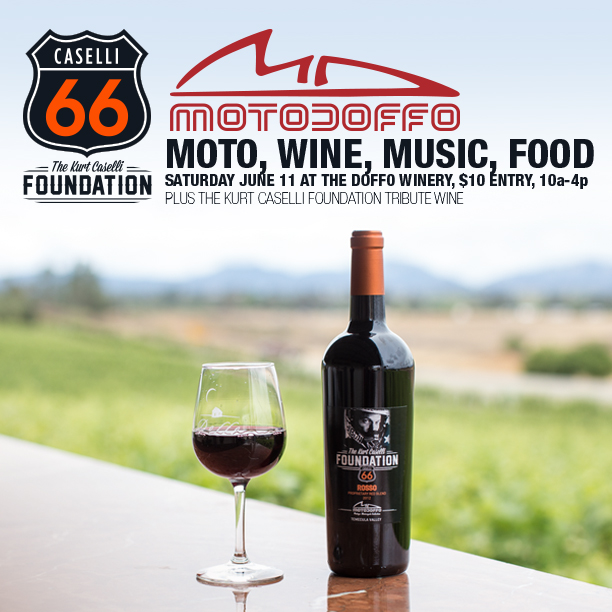 From Caselli Foundation point man Quinn Cody:
I would like to take this opportunity to extend a personal invitation to join myself, and The Kurt Caselli Foundation on Saturday, June, 11th from 10 am to 4 pm at Doffo Winery in Temecula for our third annual MotoDoffo event. This event has become one of my favorites over the past couple years. I mean what’s better than wine, cool motorcycles, food more wine and raising money for a good cause? One thing that I’m extra excited about this year is that Geoff Aaron will be on hand to perform his RedBull Trials demos. If you haven’t seen Geoff’s Show, you are missing out! Lunch will be a special Argentine Barbecue that celebrates the Doffo Family’s Argentinean heritage and is sure to pair perfectly with the Doffo’s award winning handcrafted wines. The Caselli Foundation will be making a special presentation at 1:00 pm and announcing our 2016 scholarship recipient. The presentation will be followed by a live auction with some killer items to bid on including a Double Magnum 3 liter Kurt Caselli tribute wine bottle, Two spots on the Annual Baja Beach Bash, a 3-day ride down Baja’s Pacific coast (thanks to Cameron Steel & Johnny Campbell) and A special pice of original artwork. In addition to the live auction, we have tons of great raffle items and give aways. This event is sure to be fun for the whole family so please spread the word. For more info and to purchase tickets got to  https://www.doffowines.com/event/3rd-annual-kurt-caselli-foundation-fundraiser/
If anyone would like a hotel room, we have a deal for reasonably priced rooms at the Quality Inn Temecula Valley, if you would like more high end accommodations please let me know as I have a few rooms reserved at The Ponte Vineyard Inn https://www.pontevineyardinn.com/. Please let me know if you are interested in Ponte as I can only hold these rooms for so long.
Hope to see you there,
Best,
Quinn Cody

We’ve been going a little nuts with rebuilt old bikes, lately. This is one I’ve been messing with for about six months. It’s a 1988 Kawasaki KDX200 that I originally planned on racing in the 2016 ISDE in Spain. That plan isn’t going as I hoped, but the bike still gets me going. Motorcycles from this period are kind of forgotten. Earlier ones are in demand from collectors and later ones are still being ridden. The bikes of the late ’80s and early ’90s are left out, so they’re super cheap on Craigslist, and still fun to ride. I paid $400 for this, and have probably spent $1000 more. Guys like Bud Matto of Matto Cycle, John Anderson of Dubya and Jeff Fredette have helped a lot; parts and expertise are harder to find than I expected. Look for it in the print magazine soon.