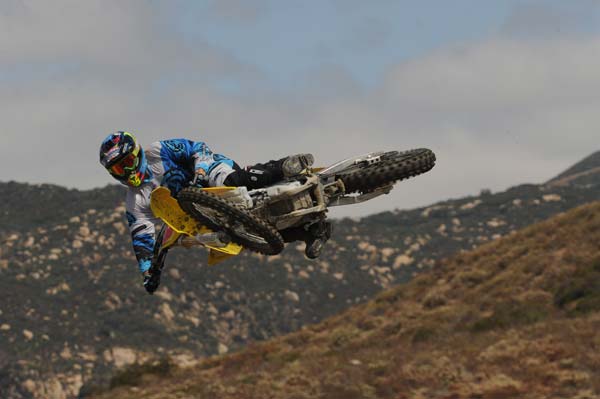 This a file photo of Josh practicing for Unadilla, courtesy of KJ.

After having some time off over our GNCC break I figured I better get back to racing.  I wasn’t sure what I was able to do but I got the ok from my Suzuki off-road team I started gearing up to race the Unadilla National.  This year I wanted to race a couple of races but this was the only one that ended up working out.

My old boss Mike Webb set up a bike for me so I was pretty much full ‘MX’ factory for the week. I say the week because I got to do some testing the week leading up to the race.  I say ‘MX’ factory because during testing I went through 5 tires in two days of riding! That’s kind of a waste but at the same time pretty insane!

After getting out to the track on Friday afternoon I did a bit of help sticking on graphics and helping get my bike ready.  Saturday morning I was pretty nervous, more than usual which was kind of stupid, I struggled in both practices and got a pretty terrible time of 27th fastest which I wasn’t too happy about.  After a short caboose reaming from Mike it was time for the first moto.

With the crappy time I got a pretty crappy gate pick so even though I got a good jump and I had an awesome bike but I still got pushed pretty wide, after the first lap I was in about 13th spot which I was pretty happy with, about 5 or six laps in I ended up losing the front in a fast sweeper and crashing pretty good.  After that I faded back and finished 22nd, which I wasn’t too happy about.

The second moto I got about the same start and was in about 15th, at about the 20-minute mark I just started going backwards, I think I was because I’m not used to the intensity of all the other guys.  They are 9 rounds in and know what’s going on and I jump in with half an idea of where I should be able to finish.  I finished that moto in a disappointing 20th.

Overall I had fun racing the national but I was not nearly satisfied with my results.  I’d like to thank Mike Webb and His Suzuki team for the chance to ride one of their bikes.  Also like to thank my mechanic for the day, Mark for helping out and getting all my stuff dialed.

I got home from NY and packed up my stuff and headed north to the Smith {Rodney} house.  Once there I went back to ‘off-road’ factory and built a race bike for the WORCS race in Washougal.

After the drive up on Thursday we got out to the track Friday morning for practice and the first race, the track was pretty fun, a little dusty but a good mix of grass track, MX, and woods.  I got a really good jump in the first moto and rounded the first turn in about 4th spot, I moved up into 3rd by the time we had left the moto track, there were two really bad dusty parts of the track so I would be able to catch Brownie in the woods and then lose him,so it was hard to try and make any passes.  We skipped my gas and I was able to make the pass in the pits.  After that I started to try and catch the Caselli in the lead.  I got to within 8 seconds at the finish.

Smiling up in Washington at the WORCS race. Photo Colombero

Saturday’s race was similar to Fridays, I got a decent start and by the time we got into the woods I was in third again.  The positions stayed like that until Brown went out with a mechanical then I moved into second while Caselli moved into the lead. I got close enough where I was trying to work out where I could try and pass him when I hit a big rock I didn’t see, I ended up on my head so my race for the win was over.

I went 2-2 for second overall which is my best WORCS result and I was pretty happy with.  I felt good and I would have liked to have got some holeshots and stayed out of the dust.