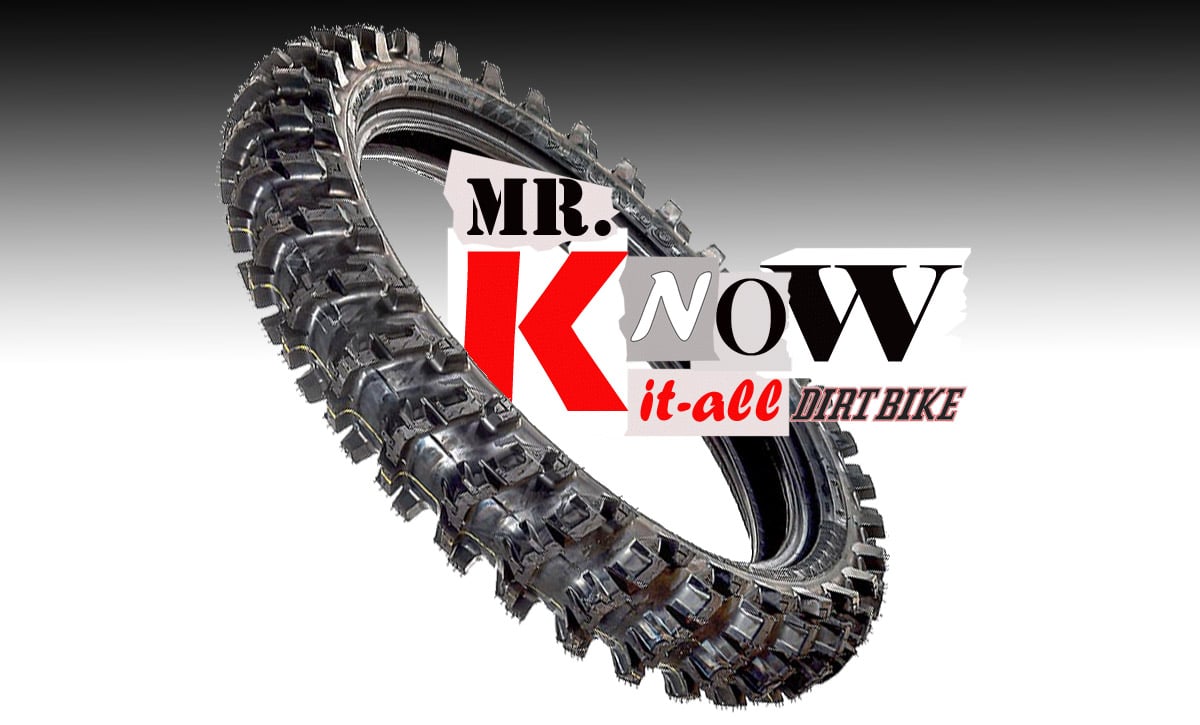 DO I NEED A SCOOPER?
Dear Mr. Know-It-All,
I ride in Florida where there’s lots of sand. Would a scoop tire be a good choice for Florida?
Mark
via [email protected] 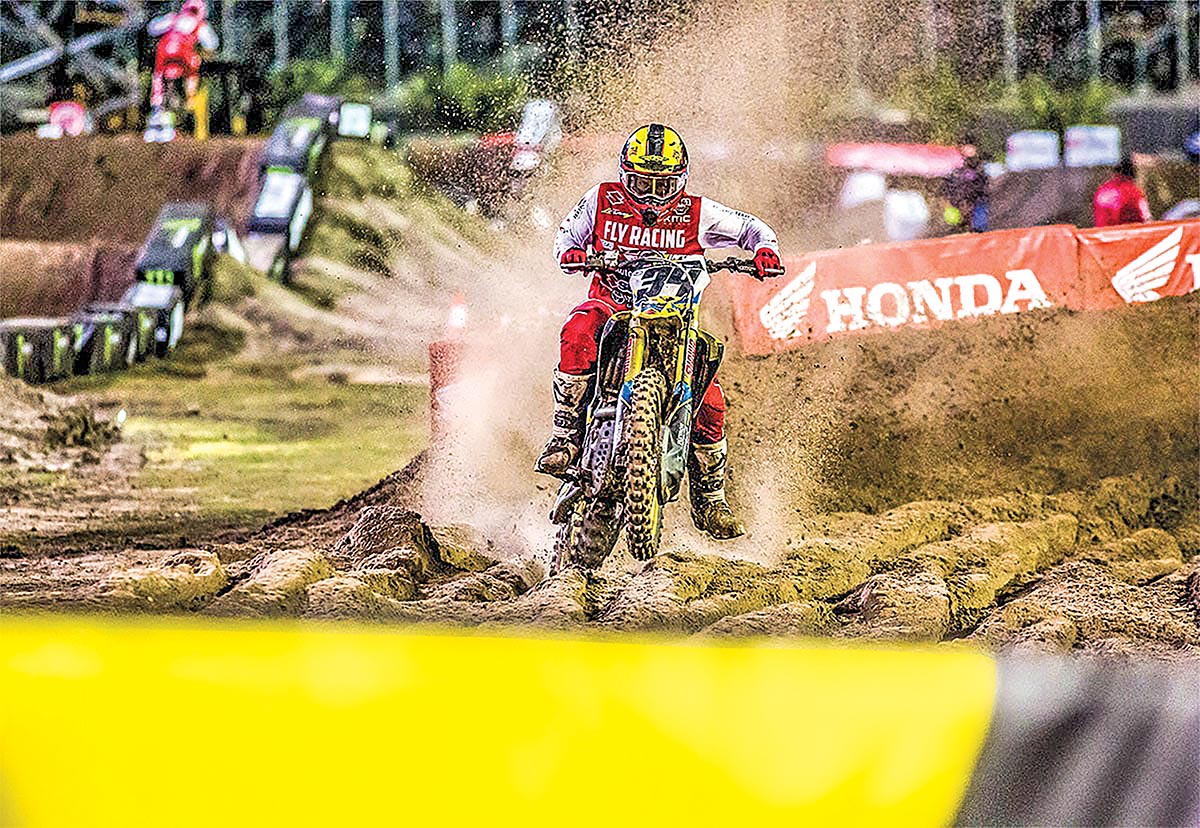 Well, Mark, that’s like asking will it hurt if my daughter pokes me in the eye with a Klein cushion-grip screwdriver? Yes, a scoop tire offers a huge advantage in soil conditions that are primarily sand. They, however, do not cross over that well into harder-packed terrain, so that should be a consideration. There are several superb sand-focused tires on the market, with Dunlop’s MX14 being one of my favorites. There is a fistful of technical reasons why I like this tire, but as important as the grip and traction they afford, it’s the versatility of the tire that I respect. Via the stability of the reinforcing ribs and the staggered knob pattern, the MX14 works superbly as an intermediate tire in harder-packed conditions. 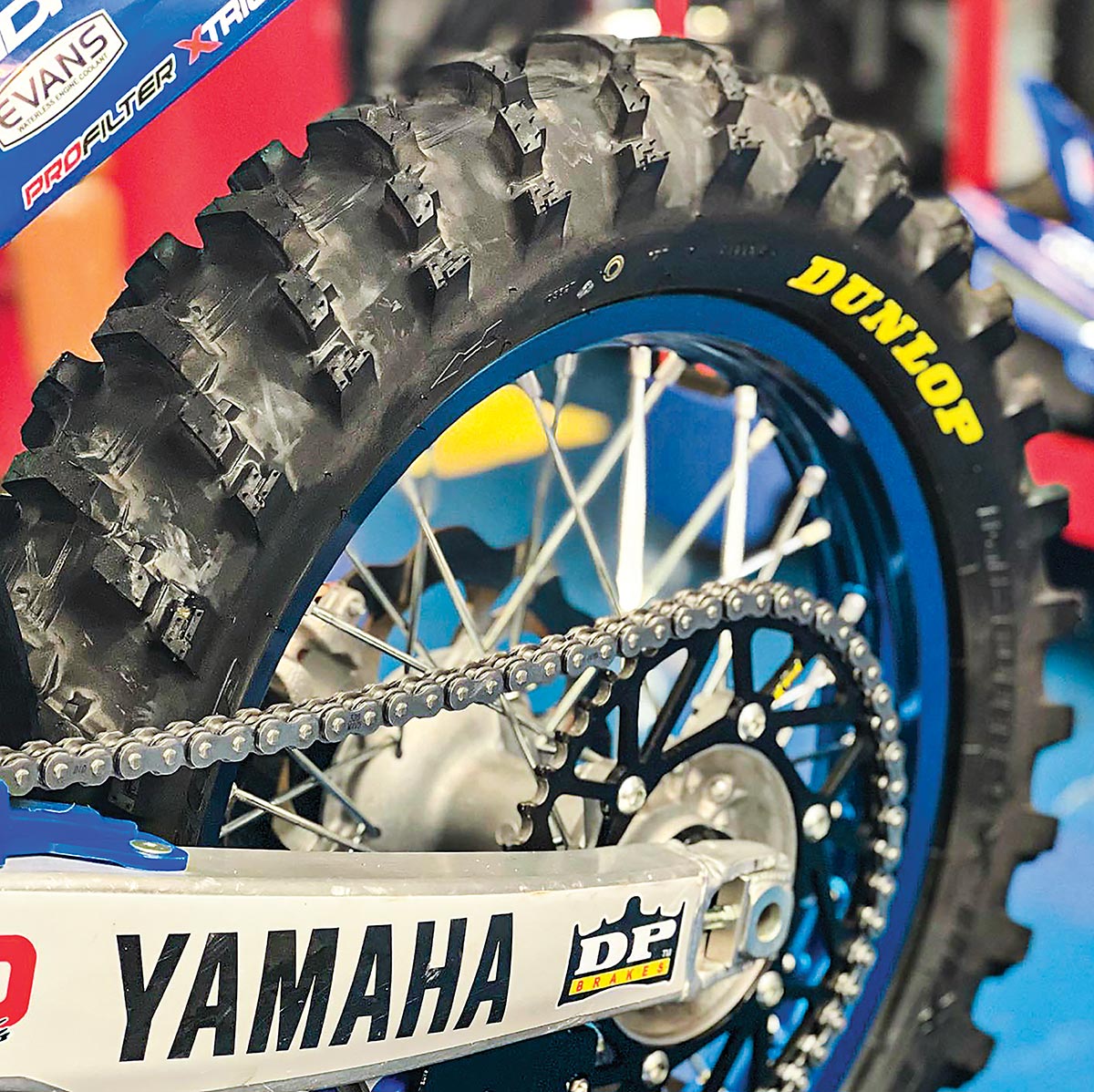 The MX14 is Dunlop’s current offering for sand and soft terrain. It’s the latest in a long line of “scoop” tires that included the MX11 and MX12. The tire has made an especially big splash this year because Eli Tomac and a number of other top pros have been using it in the 2022 Lucas Oil Pro Motocross series, even on some hard-packed tracks. The people at Dunlop say it’s the tire that generates the smallest sales numbers and the most attention. Sand tires traditionally are viewed as very specialized, particularly because soft tracks often become harder and harder as they mature. Pure sand tires aren’t used as often as intermediate tires, even in the desert where rocks are common and can damage the tall lugs of a specialized sand tire.

The goal for the MX14 was to make a soft-terrain tire that isn’t limited to pure sand. The distinctive scoop arrangement of the knobs was kept but with lugs that were reshaped for durability. Dunlop reworked the casing and increased the knob height by 18 percent. The contact patch was also increased.

In deep sand the MX14 behaves almost exactly like the MX12. If you’ve never ridden with a scoop, you’ll be amazed. A dedicated soft-terrain tire is an unfair advantage in sand, and the MX14, like its predecessor, is among the best. Straight-line acceleration is excellent. That translates to much better starts. If you are a 250 four-stroke rider, in fact, you have to relearn your start-line habits. The MX14 gets so much more bite that it drags the motor down. You have to concentrate to keep the revs up. Even on a 450 there’s a noticeable drop in revs. A 120/80-19 MX14 weighs 12 pounds, which is slightly lighter than a Dunlop intermediate tire of the same size.

The big difference for the 14 compared to other sand tires is how it behaves on mixed terrain. We initially tested the tire at Glen Helen Raceway, which is one of those tracks that was once considered loose and sandy, but has since become packed down and become harder over the years. Some sand remains, but there are sections that are hard clay, too. The MX14 worked amazingly well there. Even on blue-groove hardpack, traction was predictable. When it broke loose, it was gradual not sudden. It won’t outperform a tire that was designed for that application, but it’s better than any of its predecessors. In the past, we would never choose a sand tire for a track that was half sand/half hard. The MX14 makes us rethink that. We can hardly wait to use it at a Havasu GP, which has notoriously mixed surfaces.

Wear, of course, is an issue once you get the MX14 out of its element. We rounded one off dramatically in a few hours of riding on intermediate terrain. Not surprising. In sand, it takes a very long time to generate the same wear. We never saw knobs chunk or tear. As with most tires, pricing varies wildly. The MSRP of a 120/80-19 is $140, but we routinely see prices in the $105 range online.