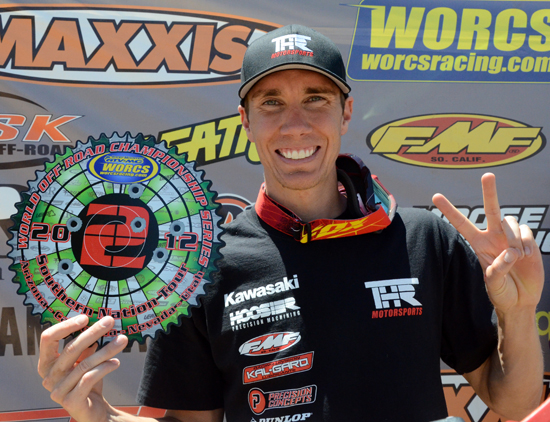 THE BELL REPORT: WORCS round six

I’d had a great few weeks under my belt and as round six of the WORCS series headed to Racetown 395 I felt really confident I could keep that momentum rolling. The WORCS crew did a great job with the course as they sped up the off road sections aiding the flow and making for a very enjoyable racetrack. They also bumped the purse to $7000 with $2000 going to the top privateers, which was great to see and added some incentive for all the racers to step up their game. With temperatures in the mid to high nineties all weekend it was destined to be a scorcher!

Practice went really well for me and all I wanted was a good start in the first moto so I could get out front and test my speed. As the gate dropped I got off the gate pretty well, but I got slightly pinched going in to the first corner. Instead of pressing the issue I cooled it around the inside and came out around fourth behind Taylor Robert, Austin Politelli and Gary Sutherlin. Justin Soulé tried pushing around the outside of me in the following left-handed corner, but I was able to pinch him off down the next straightaway and attack Gary. Before the row of tabletops he made a slight bobble and I was able to push up close and over the second jump I scrubbed past him and into third place. In my early lap charge I was already sizing up Austin when he slowed down and threw his hand in the air, the unfortunate victim of some mechanical troubles, and I was able to move into second behind Taylor. For the next few laps we traded fast lap times as he had sections he was a bit quicker, but on the second half of the track I would start to make time back on him. The hot conditions dried out some of the first half of the off road section and I felt that had it not been for that bit of dust I could have closed in and made a run on him. Regardless it felt great to be out front and pushing the leader and as we came in for the pit stops I was within five seconds. I pitted a lap before Taylor, hoping to get a clean lap and be able to close the distance, but he put in a strong lap as well and we came out quite even following our stops. From there I lost a little pace as the heat started to get to me slightly and Taylor stayed strong, putting a little bit of time on me over the next couple laps. With the white flag out I put it in cruise control, keeping the charging Bobby Garrison behind me and saving a little for the second moto on Sunday. I crossed the line second.

For moto two I wanted a better start and a chance to get out front and stretch my legs, but I was caught sleeping and didn’t jump out of the gate very well. Somehow, going into the first turn a gap opened up for me and I pushed my front end in there and came out around fourth again, behind Taylor, Bobby and Gary. I pushed hard up into Gary, but he was riding well the first lap and kept me at bay until we came into the pit straightaway. I took a bit of a risk, crossing just behind him and almost touching his back wheel, in an effort to square him up before the long pit straight. It paid off and I got a better drive down pit row, pushing up along side of Gary and then out-braking him into the following corner. From there it was the same story as moto one, except with Bobby added into the mix, as the three of us traded fast laps, unable to really make any time on each other. As I came in for my pit stop the three of us were still within twenty seconds of each other, but the following lap would see Taylor start to experience some bike problems. They got him going just behind me and I wicked up my pace to stay ahead of him, but about half way around the off road section he had a better line and squared me up, taking second away. I could smell his bike and didn’t feel he would make it much further and sure enough his bike finally quite on the next lap. It was unfortunate for him as he was definitely in control of the race up to that point, but as with any competitive motorsport, mechanical issues are part of the game. After my little skirmish with Taylor I had expected to see Bobby just ahead, but he had pulled out to around thirty seconds over me. Looking back at my lap times I did hit a bit of a lull, where as Bobby stayed consistently fast, around mid race, which I’m going to work on for the next round. I metered my effort over the next lap and a half as the heat was again playing a factor, which was allowing Justin to slowly catch me from third place, but when the white flag came out I had enough left to push hard the final lap and pulled back away, securing second for the moto and second overall on the weekend.

All in all I’m really excited to have made it onto the podium not only for myself, but for my sponsors as well who’ve been so supportive through the ups and downs of the year. I want to give a big shout out to the team: Monster Energy, THR Motorsports, Precision Concepts Kawasaki for once again putting together a great effort and providing me a fantastic bike. A big thanks to my sponsors: Fox Racing, Asterisk, HookIt.com and John Burr Cycles and to all of the team sponsors. I’d also like to thank WORCS for putting together a great event, an enjoyable track and putting up the extra purse money; it’s great to see them making such a huge effort. Coming up next is the Baja 500 and I can’t wait to get down there and start prerunning. Everything’s coming together right now and I feel we’re going to bring that momentum and enthusiasm right into Baja. Viva México!

WORCS ROUND 6 (Garrison Steps Up)