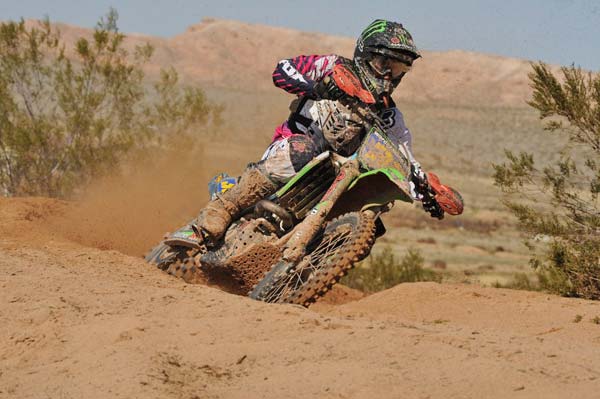 The layout of the Mesquite race course is always a brutal one; it’s the deepest sand I’ve ever raced in which makes it so rough and hard to read.  Throw in some silt holes, hidden square edges and ridiculously deep whoops and it makes for quite a physically demanding race as you’re always on edge, reacting to the unpredictability of the track.  It truly would be a battle of the sand specialists.

As we got underway for our first moto on Saturday I came out of the first corner around eighth.  It was a hectic first lap with riders crashing left and right, moving me up to sixth, but I started to tense up a bit in the chaos and the deep sand.  Taylor Robert, who had crashed a couple times on the first lap, had caught up to my rear wheel and was pressuring to get by.  Down a whooped out straight he had a better drive, swept by me and as we turned down one of the deep silt straight-aways I was riding close to the edge of the course to try to get out of the blinding dust.  The edges of the sand sections at Mesquite are overgrown and I hit a branch just wrong, somehow getting it balled up in my chain.  I did a quick flying-W as my bike came to an immediate stop, but landed right back on the seat, a bit puzzled as to what had just happened.  I looked down to see the mess of branches in my chain, worked them out and got back going in seventh place.  From there I couldn’t come to grips with the race course; I’d push and then make mistake after mistake and just wasn’t able to drop my lap times at all.  I crossed the finish line a disappointing seventh place.

For the second moto on Sunday I decided to change my attitude towards the sand and started to have a good feeling about the day.  My start wasn’t any better as I came out of the first turn around ninth and it was another chaotic start to the race with Gary Sutherlin going down hard in the silt right in front of me.  At the start of the second lap Ross Neely was just ahead of me in sixth, but it was difficult to get close enough in the sand to make a move on him.  As we headed up a long hill on the motocross track I got a good run on him and powered up the inside.  He tried to pinch me off at the top, but I wouldn’t be denied and gave him a little bump as we made the left handed turn to force my way through.  It was a drag race to the next corner, but I had the line, and the position, and started to look forward.  Up ahead of me by about twenty seconds was Justin Soulé and I could see I had his pace.  I was feeling good and pushing harder and harder, bring my lap times down and reeling him in.  At the halfway point I had narrowed the gap to under ten seconds and started to line up where I was going to pass him.  I could see him on the same straight as me now and inched closer through a twisty, whooped out sand section.  By this time in the race we were coming into lapped traffic and a rider had fallen just ahead of me.  I couldn’t quite see where he was in the dust and tried to lean away in an effort to avoid hitting his bike.  I thought I had cleared him, but just as I sped by my foot peg clipped his wheel and sent me sideways.  It was so unexpected I could do nothing to rescue the situation and went flying off the bike.  I got back up, started the bike and charged after Justin again, but I had lost around twenty seconds in the crash and on the next lap I came into a right handed corner too hot and lost the front end, falling again.  From there the gap to the top five had become pretty insurmountable and I was left to finish out a lonely ride in sixth.

In being completely candid, I’m happy to have this race track behind me; I’ve never been a fan of the deep sand at Mesquite and it showed in my results.  The next stop of the WORCS series is one of my favorites at Lake Havasu, AZ and I’m looking forward to showing some speed there.  I’d like to thank my team, THR Motorsports, Monster Energy, Precision Concepts Kawasaki for working with the bike set up this weekend and helping me make quite an improvement from Saturday to Sunday.  The team works so hard, they deserve to be up on that podium and I’m working my tail off to get them there.  Thanks to Fox Racing and Asterisk and all of the team sponsors for the stellar support.  Up next is the second round of the BIG 6 Grand Prix series at Glen Helen, CA this weekend.  Can’t wait to be back on some familiar soil!