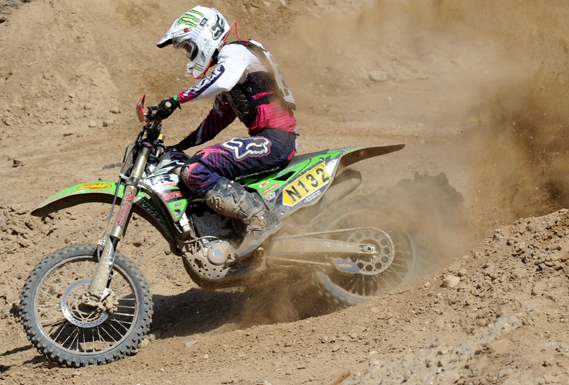 Until recently I’ve never really enjoyed the Primm venue as I’ve never really fancied the sand, but this year the sand has started to come a bit easier to me and I was fired up coming into the weekend to get some wins under my belt. The Shamrock Club marked out an enjoyable course with a balanced mix of twisty sand whoops and high speed, choppy straightaways. Bike set up would be a compromise: too stiff and the chop will rip your hands apart, but too soft and the deep whoops will be more than happy to kick your back end of from under you. I felt my bike was set up perfectly for the course conditions and was ready to get out there.

Unclassified went well for me, as instead of my usual routine of just cruising around, I felt good enough to jump out front and win, passing both of the Honda boys (Timmy and Colton) and hopefully, from my point of view, setting the stage for the races to follow. The first race would be the 450 expert event with a motocross-style start to a green light release. The Shamrocks gave us the go and the revs started to escalate. As the green light lit I got a great jump and pushed hard into the first corner sliding in just behind Timmy. The track was freshly watered and as Timmy hit a puddle I got annihilated and some of the water got inside my tear offs. Unfortunately the water crept its way inside of my very first tear off and it just figured that when I actually wanted to pull all fourteen tear offs at once, I couldn’t manage it and had to pull each one individually. I lost a few seconds in the tear off debacle, but once I cleared my vision I set to the task of passing Timmy. About a half a lap into the race I closed right up onto his rear fender and down a high speed, chopped straight I held it on a little longer and successfully made the pass into the lead. From there I pushed to get a gap and a lap later spectators started to give me the universal sign for “big lead” by spreading their arms apart; Timmy had crashed and would fall back to the edge of the top five. I had about 25 seconds over Colton at this point and put it in cruise mode as I slowly stretched out to 35 seconds by the finish over Gordon Ward, who was pinning it and worked his way up to second.

For the Open Expert race I had one thing I wanted to improve from the first race: get the holeshot and make it easier on myself. As the light turned green my rear tire dug in deep as I dropped the clutch and I was slow to get off the line. I was rounding the first corner around fifth, but I got pinched off and almost high-sided off the back of a rider, pushing me back to around seventh. I quickly shot to the outside of a few riders and in to fifth; a few corners later I made a couple more passes and settled into third behind Timmy in first and Colton in second. Being that the race was late in the day, the track had dried out quite a bit and the dust was starting to hang in the air. It took me about a lap to get up close to Colton, but once I did I knew I’d need to make a pass quickly before the dust got too bad and I’d have to settle in behind. We sped down a silty straight that had an interesting corner at the end of it; there were only markers on the outside of the corner, nothing on the inside giving us a boundary of where to turn. It had become the main line to make the turn just around a little rock pile, but Colton went quite a bit wider and I saw my opportunity to get by quickly as I cut inside of him and pushed into second. From there I quickly pulled a gap and set to the task of catching Timmy who was about ten seconds ahead by this point. A lap later I had cut his advantage by more than half and was starting to apply some pressure. I really wanted by in a hurry as the dust was bad and the longer I followed, the greater the odds of making a mistake. I was prepared to battle, but I feel I was willing a quick pass to happen and a couple corners later Timmy pushed a little hard into a right hand corner and lost the front end, allowing me by into the lead. After I got into the lead I pushed for a gap and was able to stretch away pretty quickly. I rode smooth and fast, mixing up my lines and prepping for the pro race the next day, pulling out to about 30 seconds at the finish.

The pro race on Sunday would be a two-hour affair and I felt confident I could accomplish my goal of getting out front early and stretching a lead. The Shamrocks club split up the pro and vet pro lines (where Timmy would start) and the vet line would leave around ten seconds after the pro line. Green went the light and we all raced to the first turn, working to get the holeshot. I had a good jump, but Colton was inside of me and was able to push me wide. I tried sweeping him, but he heard me and took me all the way wide into the fence, allowing Mark Samuels by me; nothing dirty, just a good racing move. I settled into third and dropped back just outside of the dust to get acquainted with a track I hadn’t seen in a day. To my surprise they had bladed the entire course just before our race and I was actually quite bummed about that as it made it more of a freeway and I felt I had lost some advantage from the previous day. Nevertheless I started to push back up into the two leaders and in a right hand corner, as Mark was pushing for a pass on Colton, he lost the front end and went down handing me second place. It took me about a lap to get up close to Colton, but when I did, I didn’t want to waste any time behind him and coming into a sweeping right-hander under the bridge I out-broke him up the inside. For a second I thought he might be able to square me up, but I was able to get on the binders just enough to block that move and take the lead; now it was time to sprint away. I quickly opened up over a ten second lead in the next lap and a half, but then Colton dug deep and found some speed, matching my pace and even closing slightly one lap. I maintained about fifteen seconds to the hallway point of the race as we were to come in for our only pit stops and as I exited the pit I saw my chance to sprint and get out of visual range, which would hopefully demoralize him and have him settle for second. I pushed hard and came around the next lap with almost thirty seconds and from there only continued to pull away to almost fifty seconds. Later Colton said that he had hit a square edge and jarred his back and was forced to slow his pace, which is unfortunate, but it happens. In the closing laps Timmy was coming on strong and started to chip away at my lead, but I honestly knew I didn’t have to ruin myself to maintain a big gap and had settled my pace down a little. At the finish I had just less than thirty seconds over Timmy and crossed the checkered flag with the win and the weekend sweep.

I have to admit being so dominant this weekend felt amazing; I’ve been working for it all year and to finally get the results I’ve wanted has really been a shot in the arm for me. I’d like to thank my team: THR Motorsports, Monster Energy, Precision Concepts Kawasaki, the bike was fantastic on a very diversified course that was really tough to get a bike set up so well for. Thanks to my personal sponsors: Fox Racing, Asterisk and HookIt.com and all of the team sponsors for the wonderful effort. It’s definitely gratifying to repay all of my sponsors with a result like this. From here I have a week off and then the Racetown WORCS event, followed shortly by the Baja 500 and I’m truly going to be working hard to keep this momentum going. Winning really is addicting.