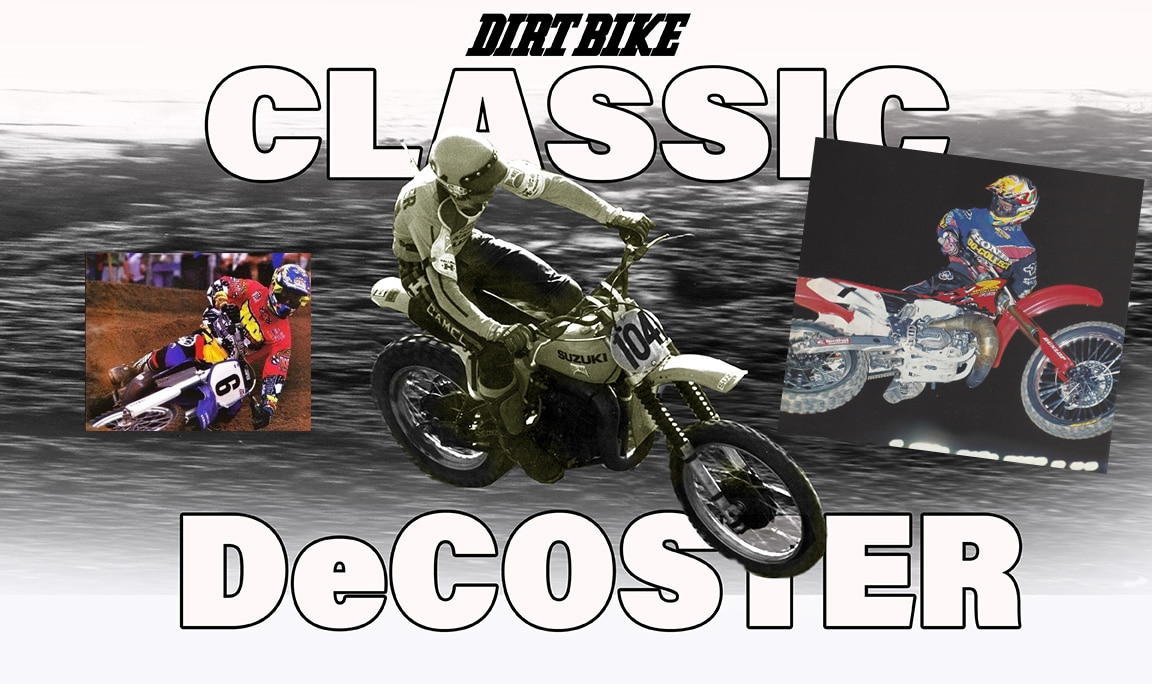 In 1995, the Vegas Supercross was the site of an odd chapter in Supercross history. The top riders of the day staged a boycott of the main event. The reason, they said, was unsafe conditions. In truth, the issues went much deeper than that. Jeremy McGrath had already clinched his title, so he used the night to make a stand and get the attention of PACE, the promoter of that era. When it was all over, very little had changed, although it did give Jeff Emig his first win in the 250 class. Shortly afterward, Roger DeCoster wrote the following editorial in Dirt Bike Magazine.

Las Vegas ’95 didn’t go down in history as one of the great supercrosses of our time–but it did go down in history. Maybe you’ve heard the story, maybe you haven’t. The truth is that the whole tale began long before Vegas that year and continued long afterward.

To recap: at the last supercross of the ’95 season, a half-dozen riders refused to ride the 250 main event, claiming  the track was unsafe. In the middle of the program, most of the permanent lights in the stadium quit because of a blown transformer. The promoter scrambled to erect temporary lights, which still left much of the track in the shadows. The makeshift lights allowed the 250 Last Chance Qualifier to be run, followed by the 125 Main. The promoter decided to shorten the  125 race by five laps, although the logic behind that move is rather confusing. Were things going to be that much better for the 250 race if they were allowed to start five minutes earlier? Was it going to be less dark? Damon Huffman got a disastrous start in that 125 main, and barely had enough time to catch Ryan Hughes by the last lap. Most observers believed that Huffman would have  been able to pass Hughes for the lead, given five more laps. He didn’t, so Hughes won. Was that fair? However, the mild controversy over that was completely overshadowed by what followed.

When riders started lining up for the 250 main, the crowd didn’t understand what was going on. Where was Jeremy McGrath? Where were Henry and Kiedrowski? Was this another qualifier? The announcer didn’ t say anything to make the matter clearer. When it finally became evident that this was, indeed, the main event and that the biggest stars were not going to ride, the fans were outraged. Many left the stands, and those who remained booed and heckled the rest of the race.

It wasn’t a memorable way to end the most prestigious series in American motocross . Was it really too dark? Were, the riders being prima donnas? The truth is that the track wasn’t as safe as it should have been, but that wasn’t the reason the riders boycotted the main. The relationship between the riders and the promoters had reached an all-time low for a variety of reasons. Frustrations had accumulated because the issues that concerned most riders hadn’t been addressed over recent months and even years. They used the light situation at Las Vegas as an opportunity to make a stand.

The riders have their points. They simply are not treated with the respect afforded participants in other sports. The promoters, on the other hand, claim that the riders don’t act like the professionals in other sports, that many of them are cry­ babies. You can’t expect a 19-year-old motocrosser to be as polished as a 45-year-old pro golfer, though, and treating the motocrosser like a kid will only make things worse.

Money, was of course, the big issue. There was no year-end points fund offered to the riders as in past years. On top of that, the purses offered are a joke compared to other big sports. Can you imagine Sampras or Agassi showing up for a tennis match where they only had a chance to win $5000 at best? Not likely. The riders can’t help but think that the promoters are getting rich at the expense of riders who are expected to risk life and limb in the darkness. The promoters point out that it’s expensive to put together a supercross. The fact the MTEG went bankrupt this year illustrates the point.

Another frequent complaint that the riders make is that they actually have to pay to race. The riders have entry fees, the mechanics must pay for passes and, depending on who you are, you may or may not get a pass or two for family members and sponsors–even those passes are only good in the rider viewing area , and getting people into the pits can be difficult and expensive. This is one of the only sports where the participants have to pay to be part of the show! While this happens in some forms of auto racing, as well, at least they get something back for their money, usually more than they put in. I think this pay to-perform concept is only found in the U.S. I can’t imagine showing up at a GP outside of this country and having to pay to get in. It was quite a shock for me the first time I came to America.

Yet another problem is what the riders feel is a lack of impartial officiating. The AMA basically lost power after last year’s near-split, so now many riders feel that the AMA referee isn’t permitted to follow his own best judgment. The riders want a referee who is completely independent of the promoter’s influence.

Finally, there’s the safety issue, which exploded in front of the fans at Las Vegas. Supercross at the top level is dangerous. About one-third of the top riders have missed part of the season due to injury–LaRocco, Albertyn, Henry, Lamson, Lusk, Reynard, Decker, Windham, Ferry … the list goes on and on. That means when a rider enters the series he has a one-in-three chance of getting hurt! It should be totally up to the riders to decide what is and isn’t safe, not the team managers, the promoters or even the fans. Acts of God do happen, but the promoters have to be prepared. At Wimbledon when the matches run late and light becomes a problem, the tournament is stopped and the remainder is played the next day. The chance of a tennis player breaking a bone is minimal compared to the risk that supercross riders take.

So that’s why the great Las Vegas No-Ride of 1995 happened. The promoters were unhappy with it, and so were the riders and fans. Sometimes, though, it takes a major blow-up before the pieces can be picked up and reassembled properly. Unfortunately, scenes like this discourage potential outside sponsors, and it’s going to be difficult to solve the problems until we do have more sponsors.  It’s kind of a Catch-22.

One thing is certain: there will be changes. It remains to be seen, however, whether or not these changes are solutions.