THE LIFE AND TIMES OF THE SUZUKI RM250 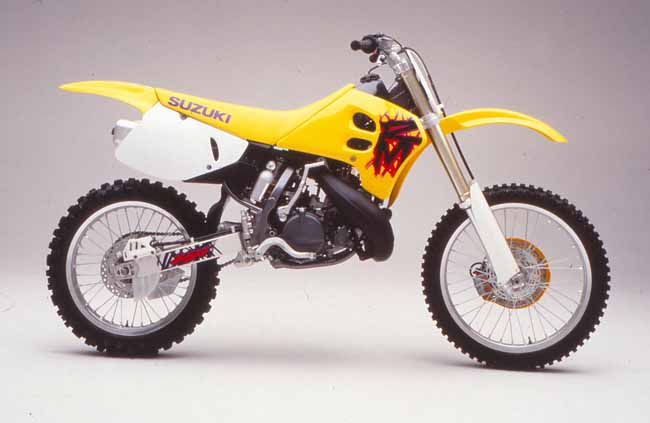 The story of the Suzuki RM250 isn’t just about a single motorcycle. It’s about a dynasty of bikes, championships and riders that goes back to a glorious era in the history of motocross. Forty-five years ago, motocross was an obscure European sport. In America, we loved flat track and hill climbing. Even in Europe, road racing was a far more popular sport. No one really saw any future in the cult sport of motocross.
No one, that is, besides a group of very insightful people at Suzuki. Back in 1965, Suzuki launched a massive development program to build the world’s best motocross bike. It wasn’t based on market research, computer forecasts or industrial analysis. It was all about gut instinct and passion.
The program came to life through the efforts of Mr. Okano, General Manager of Research and Development; and Racing Manager Mr. Ishikawa. Both men were passionate about racing and for some reason, motocross captured their imagination. The first  product of the program was the RH66, a prototype 250cc racer with a number of odd features, like a crankshaft-mounted clutch. It wasn’t very good, and the limited production TM250 that followed wasn’t any better. Things didn’t really start happening until Suzuki hired Swede Olle Petersson in 1967 to both develop and race the machine. His first recommendation was for only one change to the existing bike. He told them to throw it away and start over. That set in motion an amazing success story that resulted in a legacy of World Championships, beginning with Joel Robert in 1970. Honda, Yamaha and Kawasaki were years behind and even the European makers were stunned.
Joel Robert’s last championship bike, perfectly restored by Terry Good
Something had to change. In 1975 Suzuki made a commitment to not only improve its production bikes, but to make them worthy of their works-bike counterparts. The TM line was abandoned and the Suzuki RMs were born. First a 125 that was half TM and half RM appeared, but in 1976 a pureblood line of RMs was offered including the RM250A. If you looked at that RM and compared it to the bike that carried Joel to his first championship six years earlier, it was clear that Suzuki’s racing and production departments were working together. From that point on, it can honestly be said that there was never a bad bike that carried the RM prefix.
Between the efforts of Randy Hawkins, Rodney Smith, Steve Hatch and Paul Edmondson, the RM or its blood brother the RMX captured 16 National Championships in GNCC, Enduro and Hare Scrambles. That’s more than any other Japanese motorcycle. The RM and RMX were also incredibly successful for American riders in the ISDE. Rodney Smith came very close to winning the event overall on an RM250 in 1992.

THE YEARS
1968: Suzuki releases the first TM250 in very limited numbers. It is fragile and weird, and it shows a lot of CZ influence. But it is very similar to the original RH66 works bike with a number of expensive magnesium parts. It shows that Suzuki was paying attention to a world that other Japanese manufacturers don’t know exists.
1971: Suzuki’s next try at a production motocross bike is the orange TM400 Cyclone. It earns a reputation as one of the worst handling bikes ever made; a rap that only grows in legend. It is, nonetheless, the only production motocross bike available from a Japanese company.
1972 – 1973: The TM line grows. The Cyclone (now yellow, just like Roger’s bike) is joined by a TM250 Champion, a TM125 Challenger and a TM100 Contender. The 125 and 100 aren’t bad. The 250 and 400 are.
1975: The first RM appears in the form of the Suzuki RM125M. It still uses a motor from the TM, but the machine is more focused and more competitive, showing a hint of things to come. It has long travel suspension that is considered excellent in its day. It no longer has an oil pump; you have to mix your oil in the gas.
1976: The true RM line is born.  The RM250A is a completely new bike with long-travel suspension that is considered to be the best of any production bike available. The 125 and 370 versions are new as well. The RM is on top, but Yamaha isn’t standing still and competition between the two companies is intense, with Honda joining in later. Updates come quickly and Suzuki has three new versions of the RM250 available over the next two years, dubbed the B, C and CII. The RM250CII in 1978 gets a plastic fuel tank and an aluminum swingarm.

1979: This is a big change for the Suzuki 250. The RM250N is a mostly new bike. Honda and Yamaha have new bikes as well, but the European companies have fallen far behind by this time in the 250 class.
1986: The frame is redesigned and the rear suspension looses the big rocker arm on top, which is replaced by below-the-swingarm linkage. Suspension remains the bike’s strong point, but the motor lacks throttle response and peak power.
1988: Suzuki catches up in a hurry when Bob Hannah becomes involved with production bike testing. The 1988 RM gets a new power valve and redesigned bodywork, and it is once again best in class. Its strong point is still suspension, but now it has competitive power, too. It’s in this era that Suzuki also earns the reputation for good cornering ability that continues to this day.
1989: Suzuki makes the first top-to-bottom change in years. Everything is different, and the bike is excellent. The most significant change is the switch to a case-reed motor. Another change is the inverted fork. This also marks the arrival of the RMX250 off-road bike, which was developed with the help of Randy Hawkins. The RMX is very successful, but goes almost unchanged for its entire production run of 10 years.
1993: The RM250 looks completely different, with large shrouds that cover the whole tank. The Dirt Bike test of the day charges that the bike is essentially the same in performance. This isn’t good, because Honda, Kawasaki and Yamaha are making fast improvements. Suzuki then enters a short period of mediocrity.
1996: Roger DeCoster, who had been working full time as Executive Editor of Dirt Bike Magazine, takes a job at Suzuki in 1995 and pushes for big changes with a short deadline. The result is an all-new bike in 1996. Its wildest feature is the return to a conventional fork. It also has an internal water pump. The bike is excellent, but gets a bad rap when Jeremy McGrath looses his Supercross title in his short tenure at Suzuki.
1999: The inverted fork is back. Suzuki makes very few changes to the RM250 in this period. The bikes strong points are suspension, power and cornering. Its weak points are its excessive weight and lack of straight-line stability. It finishes in the middle of most magazine shootouts.
2001: This is the last big change for the Suzuki RM250. It gets a new frame and bodywork, new engine cases with an external water pump and a new power valve. At this point, the Suzuki is very close to the top of its game. So is Yamaha, and the two companies battle back and forth for the honor of top bike. Honda’s 01 CR is in the hunt, too, but then takes a step backward in 2002.
2008: Suzuki and Yamaha are alone among Japanese 250s by now. The two of them are basically at a draw; both have strong points and weak points, but there will be no more progress. Suzuki discontinues the RM in 2009. It‘s the end of what many consider to be the most successful model run in motocross history, from a pure performance point of view.
USED BIKES
Any used Suzuki RM250 from 2001 forward is a good find. The performance got better and better and probably peaked in 2005. The earlier models in this period were harder to jet. Most riders just gave up and ran race gas, mixed half and half with pump gas. By 2005 the jetting issues were sorted out. Suzukis tend to bring lower prices than Yamahas of the same year, simply because the Yamaha is still in production. Even Hondas have higher asking prices for no good reason. The RMs are better in every way.
The period from 1996 to 2000 is mixed. The RM250 was a good bike, but that internal water pump could leak and was difficult to repair. As with any bike that is over 10 years old, condition is the most important factor. Parts availability is generally very good.
Collectors love really old Suzukis. If you find an RM with the original aluminum fuel tank in good condition from 1976 to 1978, it’s like finding a Picasso in the attic. They dented easily and were replaced back in the day with plastic items. For a look at some classic Suzuki race bikes and intriguing stories from the works bike era, check out Terry Good’s website at www.mxworksbike.com.

The enduro version of the RM was the original RMX

By 2003, the RM was in its final form.
Share FacebookTwitterGoogle+ReddItWhatsAppPinterestEmail