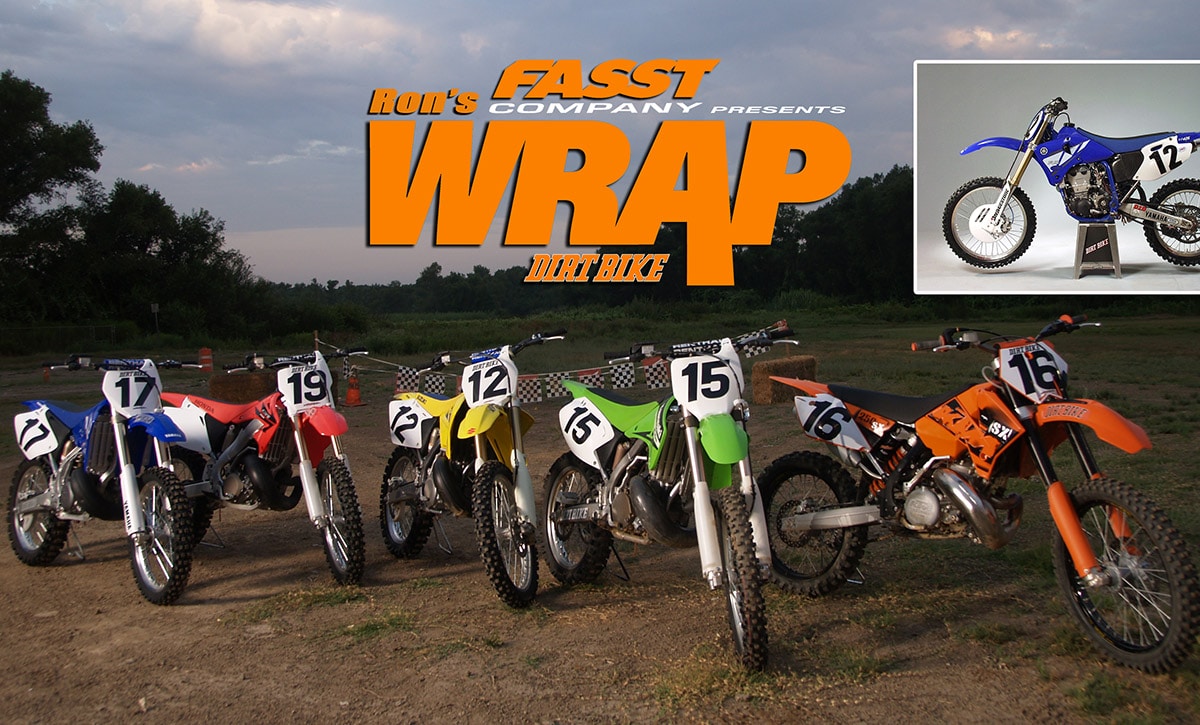 As the year 2005 came to a close we were used to  four-strokes being the center of attention. All the manufacturers still made two-strokes, though, and would continue for one more year. For the November 2005 issue of Dirt Bike, we were still gathering 450s for a premier class shootout, but we already had all the 250 two-strokes. So we tested them individually over a two month span, then printed a summery  on how the bikes would stack up in a world without four-strokes. First we ranked the Honda CR250R, Kawasaki KX250, KTM 250SX, Suzuki RM250 and Yamaha YZ250 as motocross bikes. Then we tested them as off-road bikes. Remember, at the time, the Japanese manufacturers were not making dedicated two-stroke off-road bikes, yet most of them had off-road race teams that still preferred them over the four-strokes of the day. Riders like Ty Davis and Russ Pearson rode the YZ250, Steve Hatch and Rodney Smith rode RM250s, and Destry Abbott often rode a KX250. KTM was the only major company to make an off-road two-stroke at the time. Here’s what we had to say about the 250cc two-strokes of 2006.

As of right now, we’ve tested them all. The crop of 2006 250cc two-strokes has been harvested. Of course, that’s only half of the big picture and we still have months to wait before the 450s will be thrown into the mix. At that time, we plan on a mega shootout with every possible machine. For now, though, we’ll turn back the chronometer a few years to a world where only two-strokes MXers exist. With only a month of hard-core testing, here’s how they stack up so far.

Once again, we have to give the top-two-stroke award to Suzuki. The bike was awesome last year and it’s even better now. The RM250’s handling is what puts it over the top. It’s stable in the straights and effective in turns. The motor should have been the fastest, but unexpected gains from KTM and Yamaha made that category a three-way tie.

Yamaha comes within a hair of the top position by virtue of its incredible lightweight feel. The YZ250 is virtually a feather on wheels. It also wins the hotly contested front suspension category with the new Kayaba SSS fork. We were surprised to discover that the YZ gained power this year. It shouldn’t have; there are no motor changes. Yet, the YZ motor is suddenly as fast as the Suzuki and the KTM. We’ll chalk it up to production differences.

There was big dissension in the ranks here. The KX250’s plush suspension earned it some fans on particularly rough tracks. But its motor is the weak spot. The power comes on very fast, which makes it feel more powerful than it really is. In terms of sheer fun, the Kawasaki is tops. But with so many bikes that work so well in so many conditions, the KX is somewhat limited.

The Honda is all business. It makes good power in the middle, it’s light and it has suspension that no one can fault. All that adds up to a perfectly competitive 250. But the CR is the exact opposite of the Kawasaki. It lacks fun factor. The motor revs too slowly through the bottom, the vibrating is excessive and there’s a lot of extraneous noise coming out of the motor department. It can certainly win, but other bikes can win and give you a bigger smile

There’s no question about it. The KTM has the best motor in the two-stroke world. It might not be any faster than the Suzuki or the Yamaha to the first turn, but it makes more power when you first crack the throttle. Plus it makes power down in the basement, where you need it when you mess up (and we do mess up). The SX would win if it only had suspension that was as good as its motor. The SX is great on smooth tracks, but we never felt comfortable when the going got really rough. 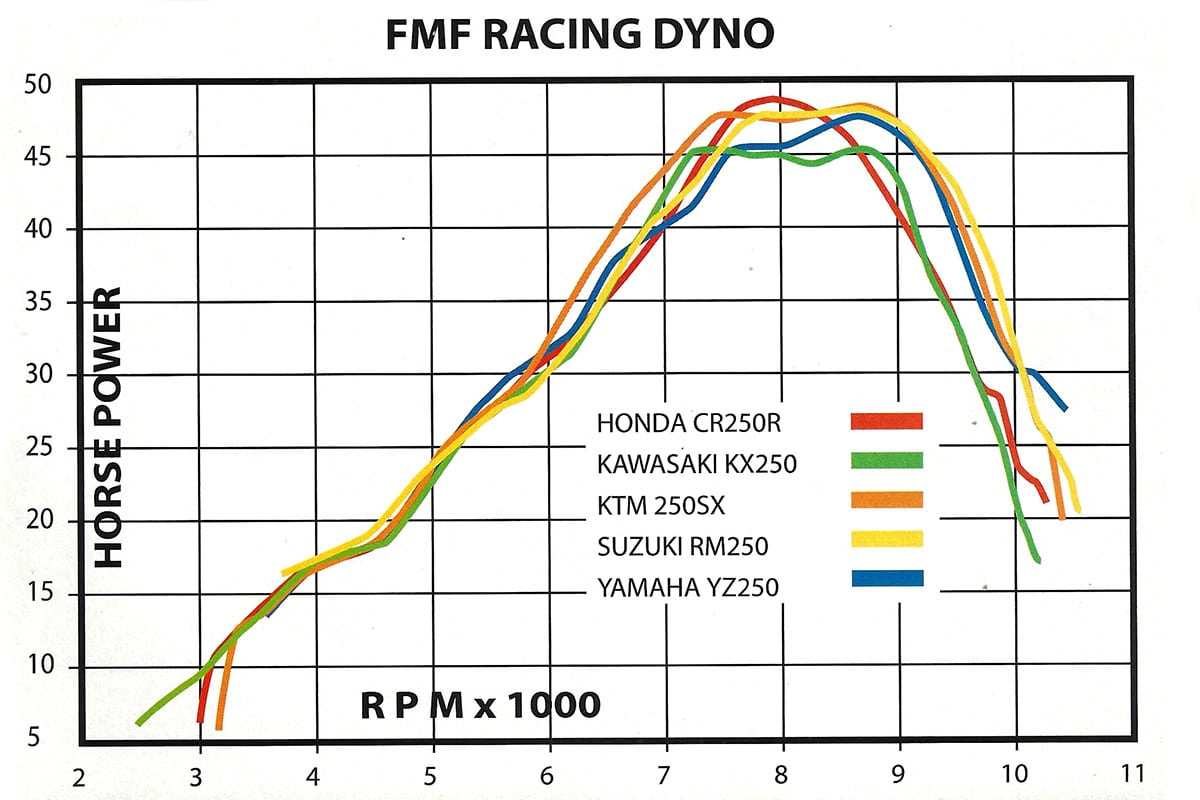 Rating 250 motocrossers as closed course off-road machines requires a sense of vision. Since the bikes are designed to compete in motocross, not one of them is absolutely suited to the off-road world in standard trim. The entire quintuplet of machines are too stiff for the rooty, rocky GNCC/WORCS world. They lack hand protection, larger fuel cells, frame and motor armor, but they’re dominating GNCC, WORCS, OMA and National Hare Scrambles competitions. Because they are nimble, light and have incredible powerbands that mirror the needs of the two to three hour GNCC racer, the two-stroke 250 is a hugely viable racer. Here’s our scoring on.their abilities to go off-roading.

The KTM has the best powerband of the group. With incredible ‘crack’ juice that erupts right off idle, the KTM has the most potent engine for the off-roader. Juha Salminen raced a modified 250SX for the entire year on the virtue of its motor, light weight, maneuverability and the ability to modify it into competitive- ness. In stock trim the suspension is harsh and the tank is too small. But she’s dial-able and our choice for the best off-roader.

A great choice for the off-roader, the YZ250 has a very raceable powerband, smart gearbox ratios and a handling package that flat fits the woods rider like a Lyca pullover. The chassis, cockpit and power require no mods. The suspension is very susceptible to proper surgery (just ask Barry Hawk, Jason Raines or Ty Davis) and can be dialed into the intended terrain. There are volumes of aftermarket goodies for the machine that help complete its place as numero dos.

This same basic machine has won handfuls of GNCC titles, which showcases its inherent strength as a viable off-road racer. Big power is smooth and broad, by upping the countershaft sprocket one tooth the entire transition of power is broadened, and the suspension craves the guidance of tuners to valve it for the off-road. Rodney Smith wins GNCC races on an RM250 with re-valved Showa hardware and some off-road doo-dads, and leaves the majority of the machine bone stock. It’s that good. 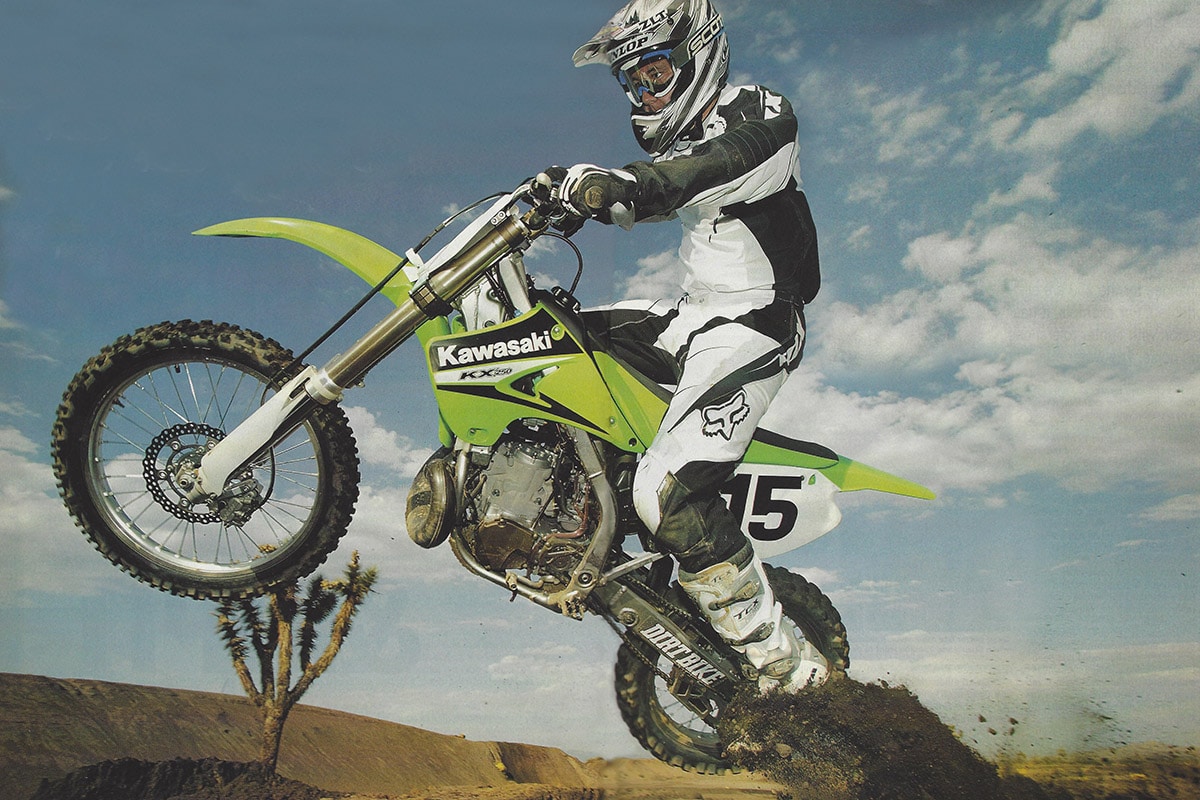 Unfortunately, the only thing holding back the KX250 is the motor. For lighter, smaller riders, the quick-hitting machine can work with some additional flywheel weight. But a lack of torque hampers the ability of the KX to short shift and lug through the woods, which means that you have to scream it. This isn’t conducive to three-hour off-road races and only the guidance of a Steve Hatch or Josh McLevy can manhandle a good overall package with the lightning hit.

A lack of useable bottom power all but kills the CR’s chances as an off-roader. Where the KX is soft off the bottom, the CR is nearly vacant. This is caboosed by a strong middle hit and decent power in the upper stratosphere. None of this is palatable to the GNCC racer. So, in spite of good suspension compliance, excellent handling traits and all of the bells and whistles that should make the CR a strong off-road contender; it just takes too much motor work to be competitive.

While we were in the Dirt Bike archives we turned the pages back to the July 2000 issue and reminisced about Jimmy Button’s works YZ426F of that year. Jimmy suffered a career-ending injury in practice at San Diego when the season had barely begun. We were devastated, and so were the people at Team Yamaha. His bike sat in the race shop for several months before they had the courage to dust it off and start it up. We got the opportunity to ride it.

The bike appeared fairly stock until you looked closely. There was no oil filler; Yamahas of the time carried their oil in the frame, but this one had been converted to a wet-sump motor. It was a four-speed of undisclosed displacement with a massive 55-tooth rear sprocket. It had works KYB suspension, of course and works Nissin brakes. There were a number of titanium parts visible, including the subframe and the DSP exhaust system. According to the Yamaha guys, the bike was 22 pounds lighter than the stock YZ426F, which means it was 226 pounds. That’s lighter than any production 450 today.

We put Spud Walters on the bike. Spud was riding a White Brothers YZ426F in the Four-Stroke Nationals at the time, and as you might expect, he fell in love with Jimmy’s bike. It was smoother, lighter and more responsive. It wasn’t faster, though. He reported that his own bike might have more peak power than Jimmy’s as well as another gear in the transmission. Yamaha guys said they actually detuned Jimmy’s bike from Doug Henry’s, which had the EX-UP exhaust powervalve developed for road racers.