We often point to Doug Henry’s 1998 Yamaha YZM as the beginning of the modern four-stroke era. Actually, it started much earlier. In 1993, Jacky Martens won the 500cc World GP Championship on a works Husqvarna 630. Before that season was complete, Roger DeCoster got the chance to ride the bike for a feature in the October, 1993 issue of Dirt Bike. Here’s what he said.

When a racer gets the holeshot in a 500 GP on a four-stroke–any kind of four-stroke–that’s news. If someone wins a moto on a thumper, it’s big news. When a thumper wins two world championship overalls in a row, the world stops. Or it should.

Jacky Martens won the Italian 500 GP and the Finnish 500 GP, back to back, on a works Husqvarna four-stroke. The Italian GP marked the first time in 24 years that a thumper has won a GP. That could mean anyone of three things. One: Jacky could be the best rider on the track, capable of winning on anything, no matter how slow or heavy. Two: It could be luck. After 24 years, a thumper is bound to win a race (or two) eventually. Three: The bike might not be a disadvantage at all. It might be good enough to win. The only way to find out was to ride the bike.

I saw Jacky at the 250 Belgian GP and took the opportunity to ask about the bike. He offered to call the Cagiva factory first thing Monday morning and ask if I could ride it (I was hoping he would do that). The next weekend I was in Germany, on a fast, hardpacked track with lots of jumps and one big tabletop. The bike was there, and so was Martens’ mechanic, Graham Kent. Graham has worked for Mike Healey, Broc Glover and the Lotus Formula Three team. He bent over backwards to help out, despite my visit being at the end of a long, hard week working on the bike.

It suddenly struck me that Cagiva is lucky to have him, not just as a mechanic, but as a PR envoy. The bike is one of the only true works bikes left in the Open class. The other riders all ride modified production machines, with the exception of Joel Smets’ fuel-injected Husaberg, which is a heavily modified production bike. The Husqvama is a limited-production racer that shares very few parts with its production counterpart. The exact engine dimensions are kept secret, but Jacky and Graham have used different engine strokes to vary the displacement from 610cc to 630cc. They also use three different flywheel weights for different track conditions. For my ride, the bike had the large engine configuration with the heavy flywheel. Cagiva uses a number of titanium nuts and bolts, and the Cagiva road race team has made some carbon-fiber parts. The bike weighs 233 pounds–about 30 pounds lighter than the production 610. You can’t get that kind of weight reduction with nuts and bolts. The frame and engine are built just for Jacky. One interesting technological feature is a hydraulic preload mechanism. This allows the bike to have more shock spring preload on the start, where traction is critical. Once Martens hits his rear brake, the  preload drops back to normal. Another interesting feature about the bike is that it is run exclusively with Pirelli mousse tubes in the tires. Martens feels that the mousse tubes are no disadvantage, so why not? They cannot go flat, which would be a disaster in a GP.

I have ridden works motocross bikes all my life. I have ridden fast ones, slow ones, light ones and heavy ones, but I have never ridden one as powerful as Martens’ Husqvarna. It’s faster even than the works Honda RC500. It has power everywhere–on the bottom, on the top–everywhere. This is a bike for someone who wants the ultimate in macho power. No wonder it can pull holeshots against the two-strokes. Torque is excellent and it doesn’t taper off on top. It was some time before I got used to the fact that the bike would outrun anything I had ever ridden. I did, eventually, though, and then I could concentrate on the other things that the bike did. It’s a good-feeling bike, as you would expect from a hand-built piece of works machinery. The controls are light-feeling and well shaped, the shifting is smooth and the Nissin brakes are excellent. The seat, on the other hand, feels like something off a road-racing bicycle–hard as a rock. If I had to complain, I also might mention that the handlebar is very swept-back and the footpegs are too rearward for my taste. Overall, though, the bike lacks the cobby, unfinished feel that many European bikes have. It is as well finished as any Japanese bike.

It is easier to start than you might expect considering it’s a 630cc single. It takes a couple of good twists of the throttle to prime, with the accelerator pump squirting raw gas into the carburetor. Then, with no choke or throttle, a good, healthy kick gets it to fire up. The first thing I noticed was vibration–lots of it. I was surprised at how quickly I got used to the buzzing, though. As soon as I was moving I forgot about it. Maybe the acceleration just grabbed all my attention; you probably wouldn’t worry about a little vibration if you were strapped to the nose of a Patriot missile, either. Jacky likes having the idle set fast. Most good four-stroke riders set up their machines like this in order to reduce engine braking and backfiring. 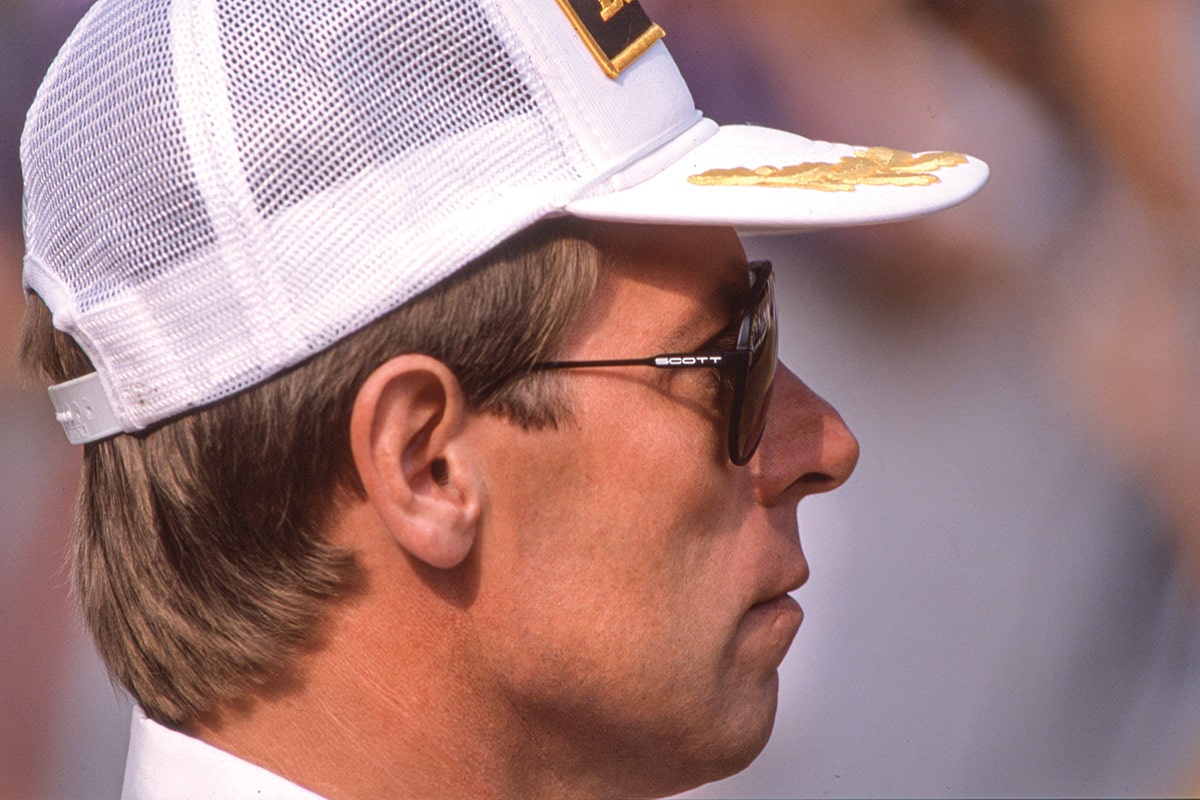 Overall, the bike doesn’t feel nearly as heavy as most four-strokes. It shouldn’t. Its weight actually is about the same as a KX or CR500. It still feels a little heavier than an Open two-stroke, but that is due more to the gyroscopic influence of the big flywheel. The stability is excellent, even through nasty square-edged holes at high speed and during braking.

The front end feels light, although that is due as much to the power as the weight distribution. Also, the rearward bars and pegs make it a little difficult to weight the front wheel. The suspension settings used by Martens are very stiff and set up for sand riding. I could never bottom the front, but in the rear it was easy, especially in G-outs. The leverage ratio seems very linear. I still have to say that I have ridden some works 500cc two-strokes that might be better in some situations than Martens’ bike. A RC500, for example, is more controllable while jumping. On the other hand, there are other situations where the power and stability of Martens’ bike would make it superior on fast, rough tracks with high-speed straights. In the end, I have to admit that the four-stroke is no disadvantage anymore. On top of that, it’s a fun bike to ride.

And I love the way it sounds.