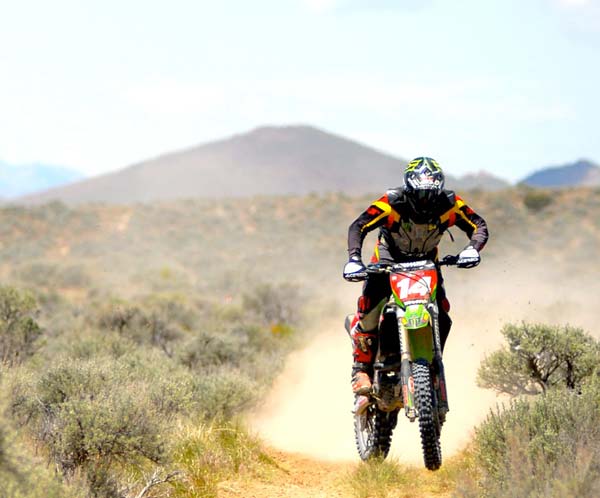 The Utah dirt was pretty much perfect, since they’ve been getting a lot of rain here. We started in this big open field that was pretty smooth, so it was a full drag race until we went through a gate and got onto the single track stuff. I had a first kick start, but wheelied taking off and I’m sure it was entertaining to watch. Fortunately, I was still able to get to the end of the bomb in 3rd behind Kurt and Kendall. For the next 5-miles I just followed Kendall, and then Kurt missed a turn and got in between us. The first part of the 65-mile loop was awesome and we stayed up in the trees. It was really easy to key off the guy in front of you and that’s pretty much all I did with Kurt. Kendall was on the gas, and actually put a gap on us.  Kurt knew that, so he was cool enough to wave me by to see if I could reel him in. I think Kurt was just a little tight and figured he would just key off me for a little bit. Once I got around I felt good and was pushing it to catch up. Then, around the 35-mile mark, we had to stop at the alternate pit to get a splash of gas. As I took off, Kurt was coming in to get gas. I could see Kendall not too far ahead and really wanted to try and close the gap even more. They put us in this really fun, tight sandwash where Kurt was able to get right back on me. As soon as we got out of it, he was able to get back around. The rest of this loop got really fast and sketchy for me. We had a lot of fast valleys where the grass was covering everything, and I just started to lose some time. It was pretty dusty, and it was a little hairball to hold it on. I saw the three of us had a good gap on fourth, and just played it smart and figured I would save some energy for the second (35-mile) loop. Leaving the pits, I still felt good and we went back into the trees which was way better for me. The traction was so good and you could really push the bike harder then you normally would. I had a good pace the whole second loop, but was never able to make up any time and just rode by myself to finish 3rd. Kurt was able to get around Kendall and take the win and increase his points lead. I’m still sitting in third right now.

I actually had a really good time today and felt more like myself again. It’s been pretty frustrating since I’ve been dealing with some stuff the last couple months and was just trying to race through it. I feel a lot better again, and it was nice to be running up front where I feel I should be. I’m always trying to go to the races and win, but just came up short again. I know I’m a lot closer and will make sure I finish the last H&H’s out strong!

The club did a great job on the course and you really couldn’t have asked for better weather. It was definitely one of the best races of the year! Racing in Utah is always one of my favorite places to go. The people are always so nice and supportive.

I was a little worried on the way home since the world was supposed to end today (or something like that). No, not really, but it made for a good conversation.

Jacob Argubright had a big crash on the first loop, but was luckily ok. He hit his head pretty hard and called it a day, which is the smart thing to do after that happens.

As of right now we only have two H&H’s left and they’re both in October. They had to cancel one in Nevada and I’m not sure if they’re going to reschedule it. So I have a big break before the next H&H. Time to focus on WORCS, X-games, and the ISDE (in Finland).

This weekend I have a WORCS race up in Idaho, and then a weekend off before another WORCS race.

I attached some photos from Megan Blackburn, Brad Bentley, and Mark Kariya. Thanks!