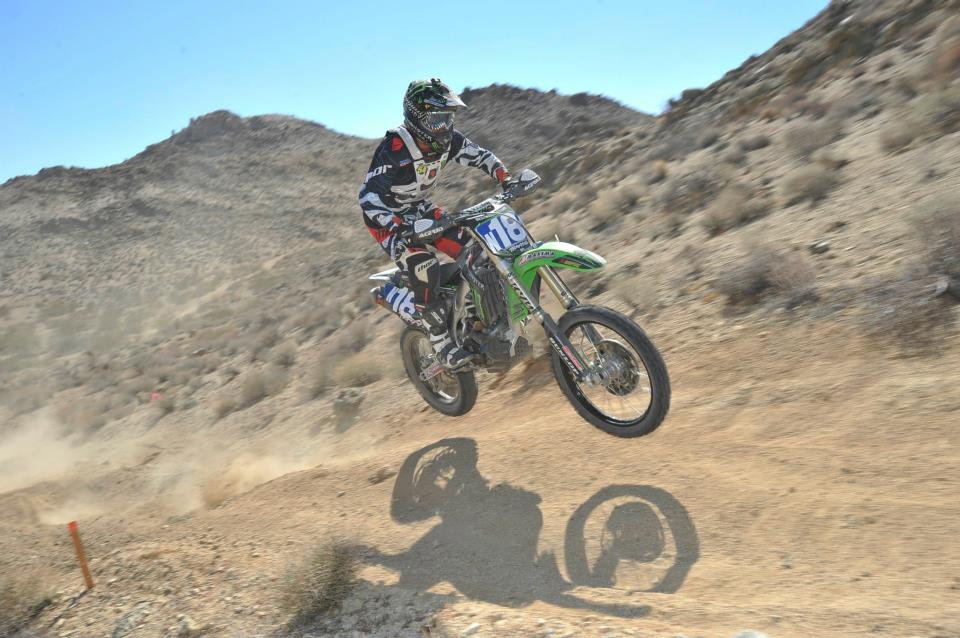 This is the first time I’ve raced this event in a few years, and I was definitely looking forward to it again! It’s always fun doing team races and Gary and I have been talking about doing this for a while. The course was basically three big loops, which would come in halfway between each loop. The first part was 15-miles and then the other side was 20-miles with it being a little more technical. Gary was going to ride the 15-mile section three times, and I was going to ride the other section. We only signed up yesterday, so that meant we were starting last in the open Pro class (7-riders). They started one pro at a time with 30-second intervals between each rider. Gary’s section was first so he was the one starting, and then I waited in the pits for him to come in. After his first loop he made a few passes and gave me the bike in 4th, but we were running 2nd or 3rd on adjusted time. David Pearson was leading on time and always goes really fast here, but we knew he was riding solo and it’s a tough race to do on your own. I took off and luckily there was a little breeze that was helping with the dust. A few miles in, I made a dumb mistake and slid out (nothing big). I got back up pretty quick and started charging again! I made one pass and now was running 3rd physically, but then before my section was over I had another one of those small slide outs. I brought it in, but had lost some time to David and not sure on Burson/Morrow team. I was a little mad at myself for doing that. Gary put in another great section and made some time back up, but we still weren’t leading on adjusted time. My second loop was way better and I felt good. I actually made up time on the two teams in front of us and could see them coming into the pits. Now we were leading on time, and just needed to be smart. Gary once again really stepped up and got around Pearson and wasn’t far behind the Burson/Morrow team. They started 1 1/2 minutes in front of us so I knew I just needed to be within that to take the win. About 8-miles out I was able to get right behind Morrow, but the dust was pretty nasty and I really didn’t want to throw it away taking any chances. For the rest of my section I just stayed with 20-seconds and keyed off Morrow. It felt really good to see the checkered flag and win this race again!

Pretty bummed at the way I started out, but then got into my groove! Gary has been riding the best I’ve seen him and it was cool to be able to team up with him for this race. I thought our game plan worked out perfect and we did exactly what we set out to do! WIN!

What a fun race to go do again! It was definitely dry and dusty, but the course was really good! I don’t get the chance to do any of the BITD races so it was cool to be able to go back, and see a lot of familiar faces.

Now it’s time to focus on Mexico! I’m heading down there to start pre-running and figuring out my section for the San Felipe 250. I’ll be teaming up with David Pearson and Robby Bell for team THR Kawasaki. Looking forward to it!

GPR has been one of my long time sponsors, and a great group of guys, were the title sponsor for this race. It’s always cool to win a race that your sponsor supports!

Last night before the race Gary and I found out there was a $3,000 bonus for first overall pro! Ron Purvines was putting up the money and I thought that was pretty cool!

This was the first race I brought my new Mercedes Sprinter to. I actually just went and bought it this week and love it! Big thanks to Steve Fox of Hoy-Fox Mercedes in El Paso, Texas. He’s a racer himself, and a great guy, so it’s definitely the place to go get one. Monster Energy Kawasaki, GPR, Hoy-Fox, and a couple of other people made this possible. It’s plain right now, but here soon it’s going to be pretty trick!

James Zomerdyke from Thor came out to support his riders. It was cool to see him make it to the race and supporting the off-road riders! They’re also expecting their second child this month, which is pretty awesome (minus the no sleeping part).