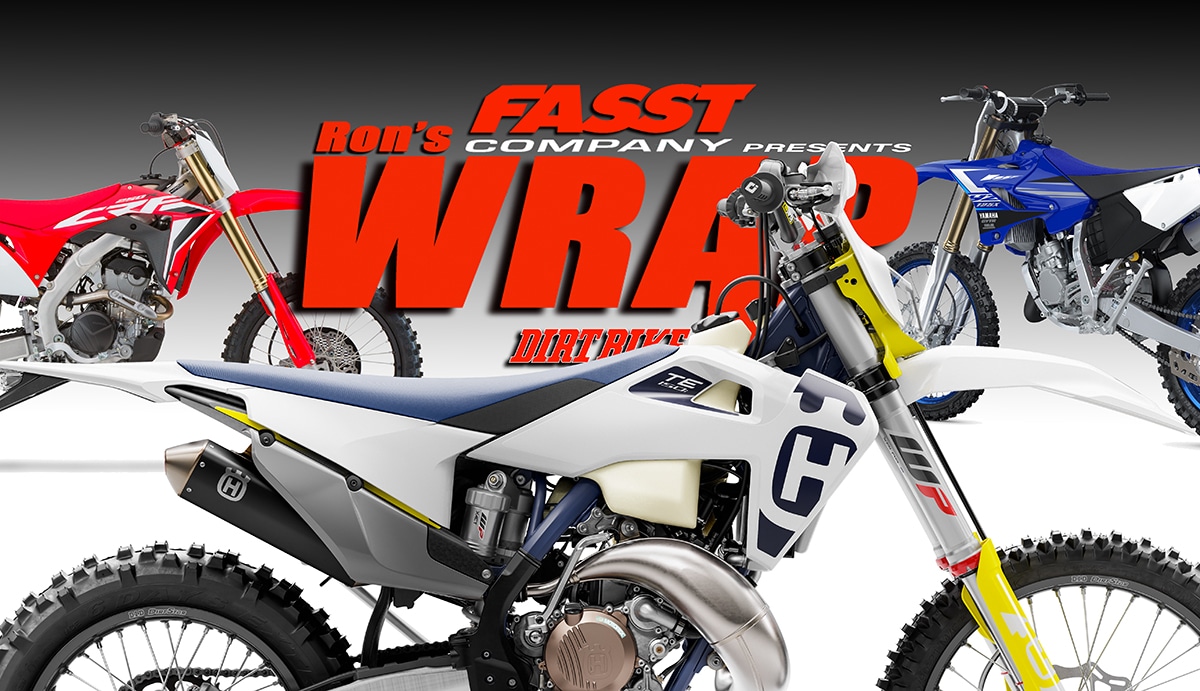 We’re only halfway through 2019 according to the calendar, but that puts us right in the middle of 2020 new model season, at least as far as dirt bikes are concerned. Street bikes and adventure bikes have their own schedule, with new models typically being shown in October and November. As of now, Honda, Yamaha, Suzuki, KTM, Husqvarna and Sherco have all shown what they have in store.  Kawasaki will wait until next month, but we already have an idea of what their big news will be. Gas Gas and Beta will have something soon and TM usually waits until the EICMA Show in Milan, each November. Here’s the best of what we’ve seen so far. For an index of all 2020 new model information released so far, click here.

Finally! KTM has reintroduced the XCF-W range, which consists of off-road four-strokes. These bikes had been left out of the line for the last four years. According to KTM, off-road bikes are required to undergo a lengthy and expensive approval process, similar to the one for dual-sport bikes. In the past, there were street-legal EXC models and full race XC models, with nothing in between. Now there is. The XCF-Ws have the same chassis as the dual-sports, but they have stiffer suspension and more performance. They still are very quiet and meet the emission requirements for a California green sticker. On the two-stroke front, more bikes have been converted to transfer Port Injection. That includes the 250XC, the 300XC and the 125XC-W. The motocross two-strokes still have carburetors. For more KTM 2020 info, click here. 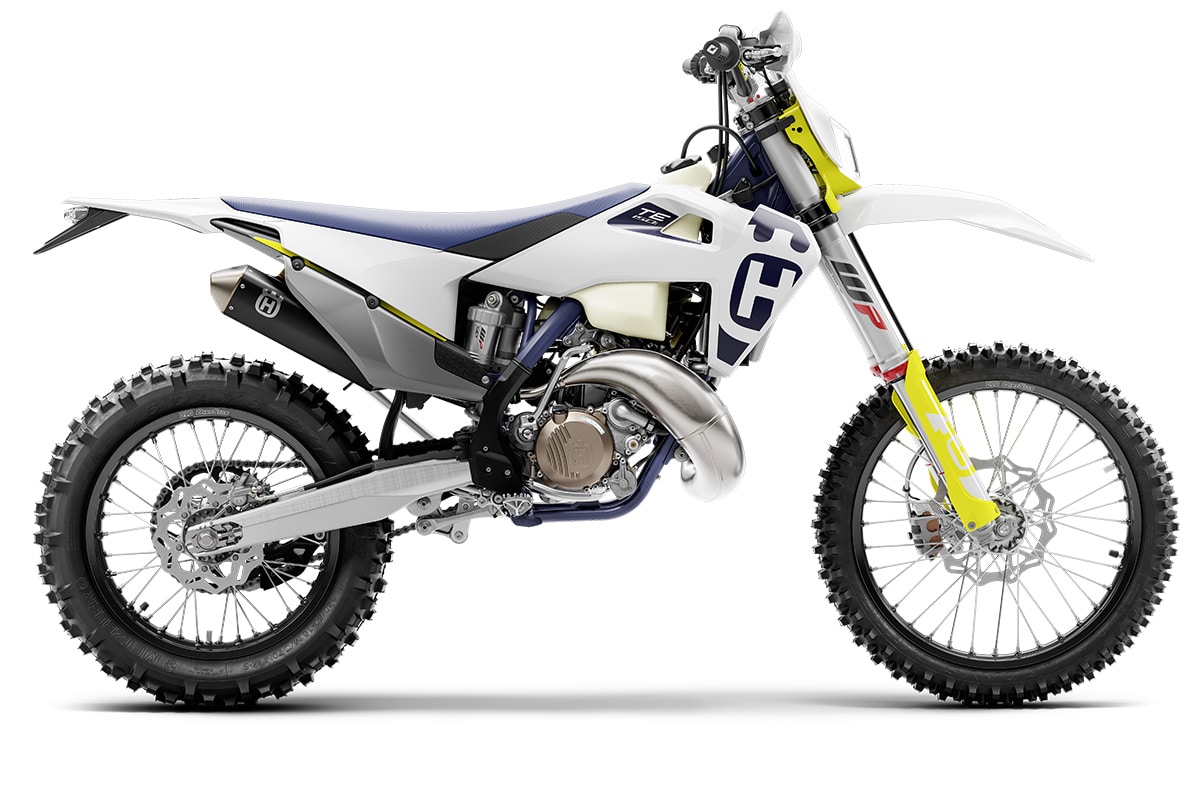 Husqvarna also went to TPI fuel injection for several models that were carbureted last year. The TE150 and TX300 have lost their carburetors, but the TC250, TC125, TC85, TC65 and TC50 still have carbs. And, like KTM, Husqvarna now has an off-road four-stroke line that fills the gap between the racers and the dual-sports. In the case of Husqvarna, these are called “FE” without the “S” on the end, which means “street-legal.” Before anyone starts talking that “White KTM” stuff, remember that Huskys have linkage rear suspension while KTM XCF-Ws all have PDS rear suspension without linkage. For more on the 2020 Husqvarna line, click here. 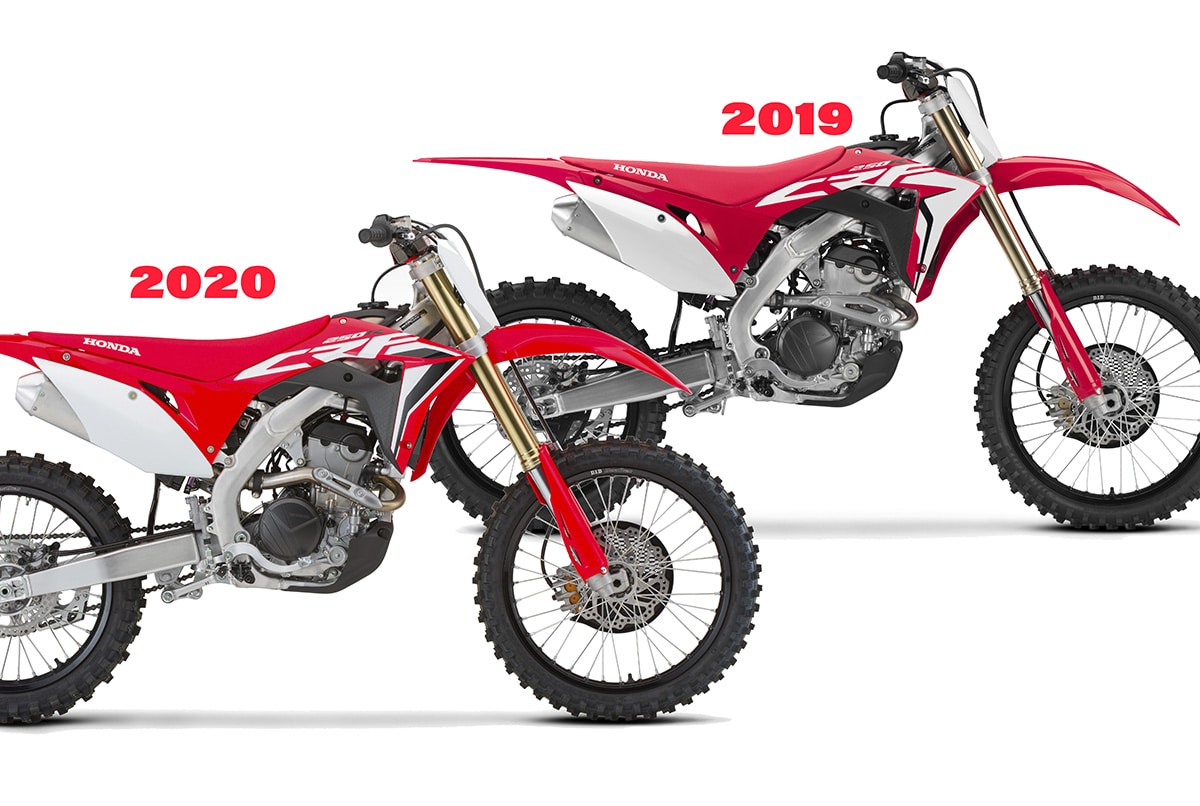 Honda put more effort into its CRF250R and CRF250RX than any other models this year. It doesn’t show unless you look at a new one and a 2019 model back to back, so here they are. The frame is obviously different. If you look at the area above the swingarm pivot, it’s clear that Honda engineers left room for a kickstarter on the 2019 model. The swingarm is different, too. Both are said to be less rigid. We know there are big changes in the head and valve train, but one interesting omission is the resonance chamber on the right head pipe. It’s gone for 2020.  Honda also incorporated traction control on the 450 models, but don’t get your hopes up. There are no wheel sensors, so it’s the same half-measure as KTM’s traction control. Click here for more on the Honda 2020 models. 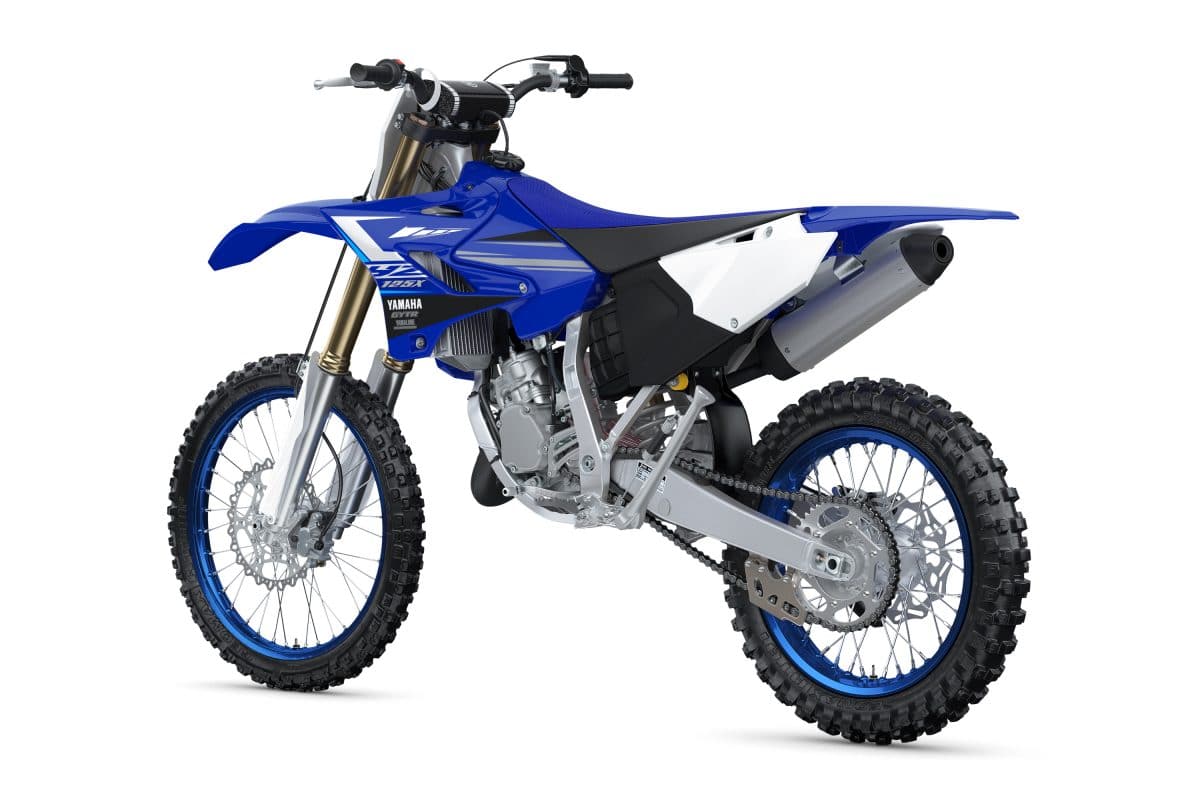 Yamaha’s new model for 2020 is the YZ125X. The eternal YZ125 got the same off-road treatment that Yamaha used to create the YZ250X. It has an 18-inch rear wheel, softer suspension, a kickstand, a new pipe, a longer silencer, a different head and a reconfigured powervalve. It didn’t get new transmission ratios or a larger tank. You can read more about the 2020 Yamaha YZ125X here. Yamaha also brought the YZ250FX four-stroke off-road racer up to date. Last year, the YZ250 was all new while the FX was unchanged. Now, the FX gets the new engine and frame. It should be considerably lighter, as this motor was designed to have electric start from the beginning, whereas it was a retrofit on the previous FX. Yamaha also made substantial changes to the YZ450F motocross bike, particularly in the frame. You can read about the 2020 YZ450F and the other motocross models here. 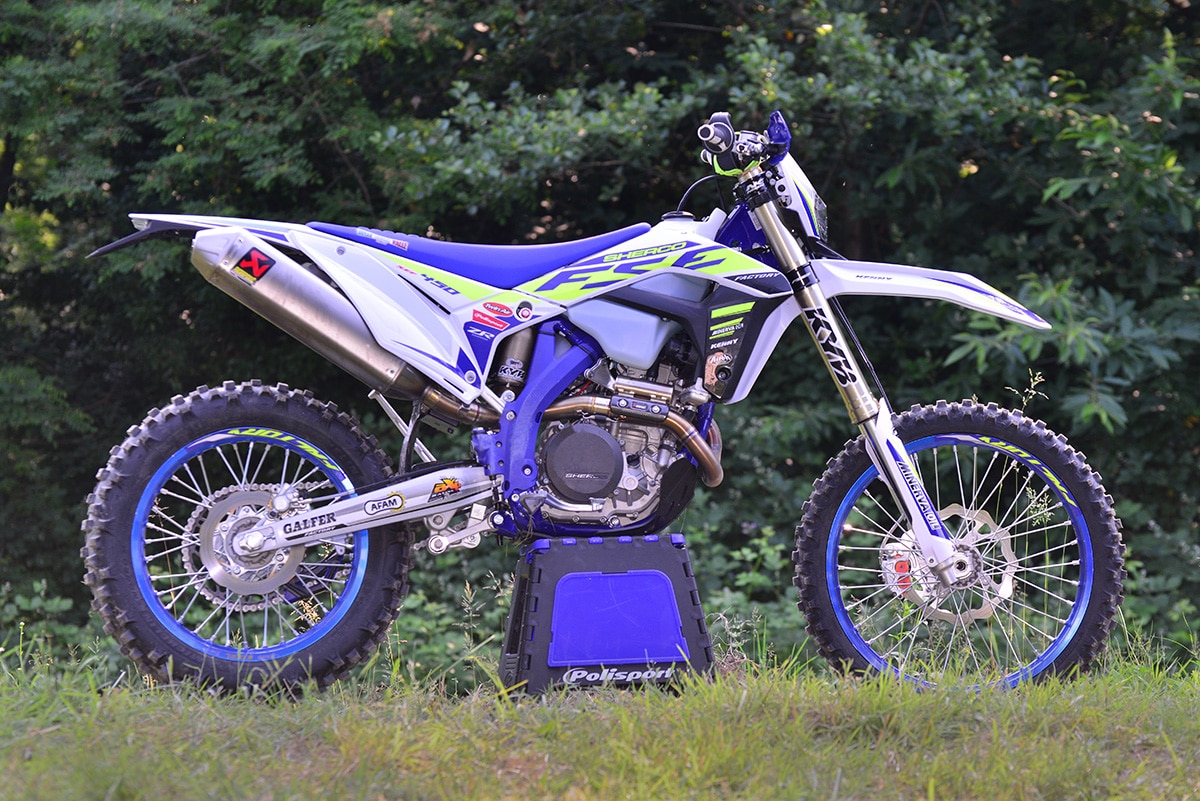 Last week I went to Europe to ride the 2020 Shercos. The French company still offers the same models, but all have been updated in subtle ways. The two-strokes have a much smoother power delivery and the big 450 is actually more of a sweetheart than a brute. The biggest news with Sherco, though, is a new importer. Ryan Young, who used to handle only trials bikes, is now selling the off-road bikes as well. You can read about the 2020 Shercos here.

Suzuki hasn’t made any changes to its dirt bike line for 2020, other than the omission of the RMX450Z. Sometimes no change is a good thing, but Suzuki wasn’t on especially solid ground in 2019. The RMZ250 and RMZ450 finished at the bottom of their respective shootouts. The good news is that the DR650S is still alive and kicking, We don’t know exactly how Suzuki got the air-cooled, carbureted dual-sport past the emission police, but it probably has something to do with fleet averages.

Kawasaki will be releasing its 2020 line in a few days. The secret that everyone knows is that the KX250 will be redesigned. The question that remains is “will there be a KLX450 off-road bike based on the new motocrosser?” Better yet, will there be a dual-sport bike? Kawasaki has hinted that such projects are in the works, but that secret has been well kept. 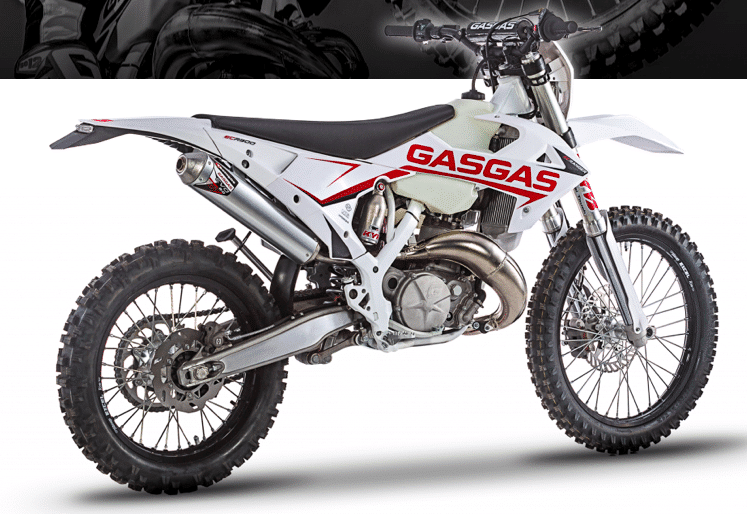 The only 2020 GasGas model that we have seen so far is the ECRanger. This is a 300cc two-stroke designed to have a more affordable MSRP. The power output is milder and the KYB suspension is softer than the standard 300 because the company sees this as more of an entry-level trail bike. Beta has a similar model called the Xtrainer. 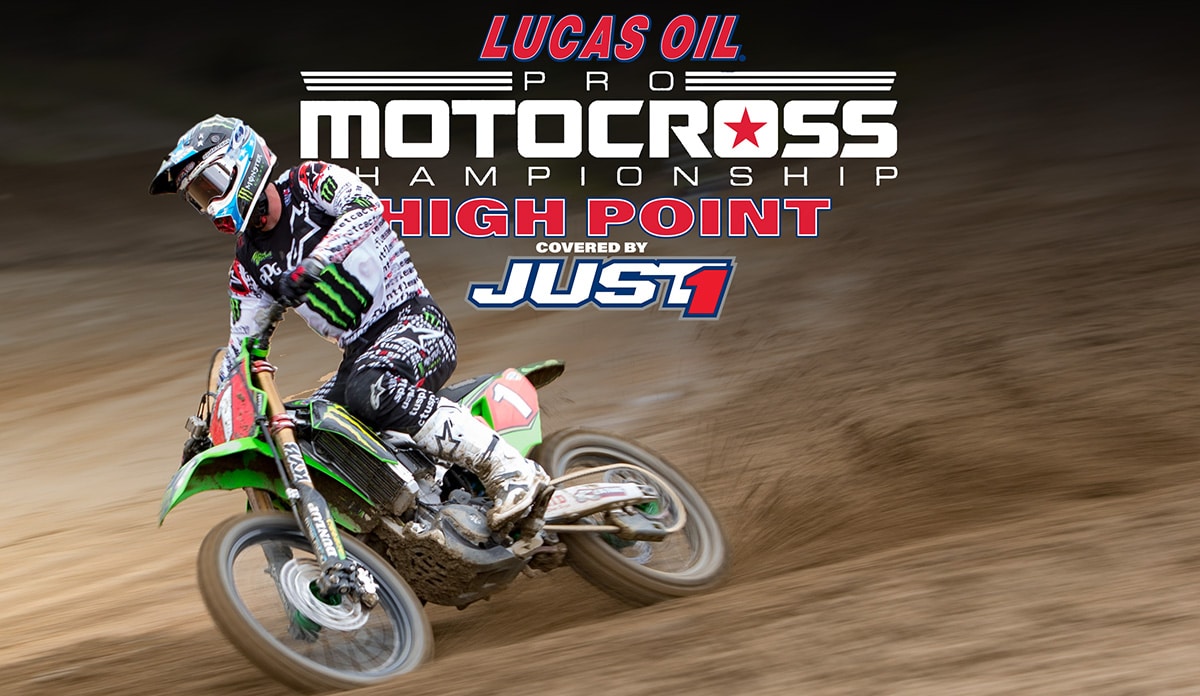 Brandon Krause will be bringing you live results from the High Point National Motocross at Mt Morris this weekend. Check in several times to see what’s happening after the short break in the schedule. Click here for an index of all our 2019 National MX coverage. 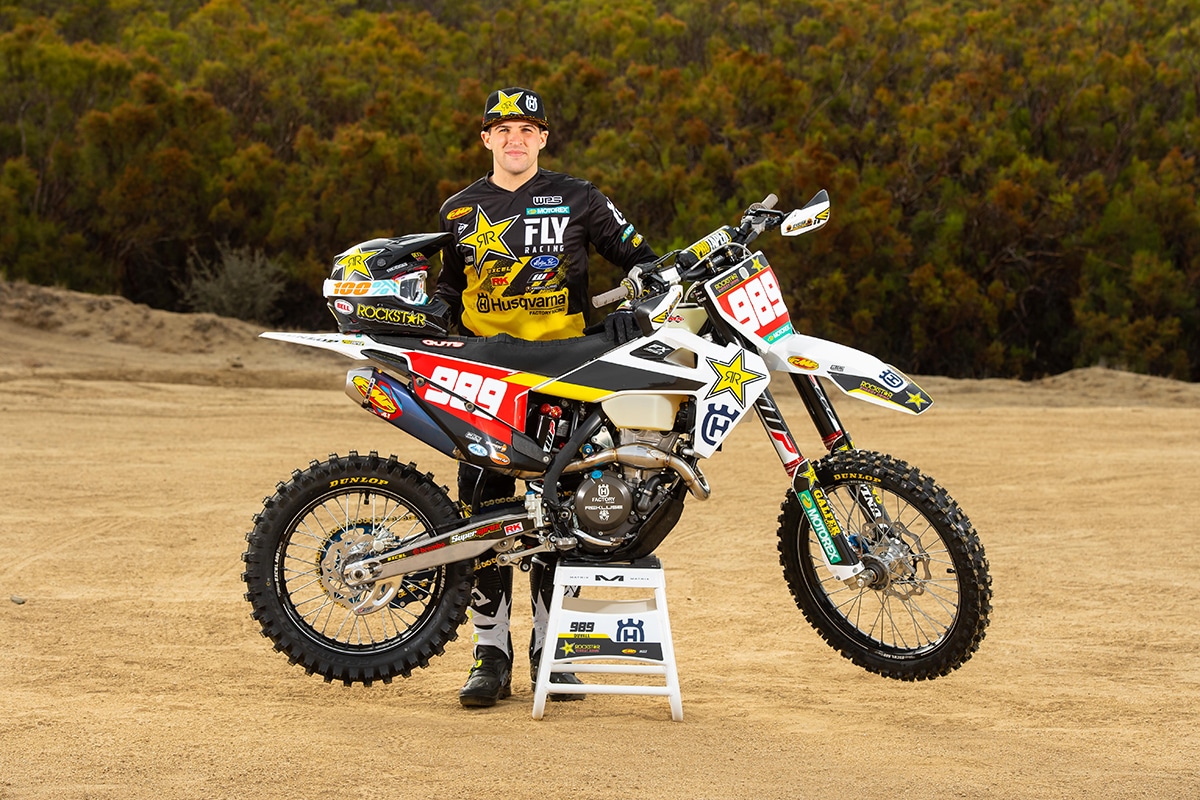 This is from Husqvarna:

It is with great excitement that we announce the two-year contract extension of Thad Duvall with the Rockstar Energy Husqvarna Factory Racing Off-road Team. Since 2017, Duvall has been an integral part of the off-road team, bringing the drive and determination necessary for success. He is currently in contention for the 2019 GNCC Racing Championship Series aboard his FX 350.

Tim Weigand- Team Manager: “I have had the privilege to work with and get to know Thad over the last 3 years. He is class act guy who’s determination and grit is infectious. Thad is a constant front runner no matter what race series he lines up for and this is evident by his results over the last few years. I know we have yet to see his true potential and I look forward to seeing his confidence grow in the years to come. We are extremely happy and grateful Thad has chosen to continue his journey with us.”

Thad Duvall- “I am excited to continue my relationship with the Rockstar Energy Husqvarna Factory Racing Team. I love being a part of a pioneering brand and I look forward to a successful future with the team!” 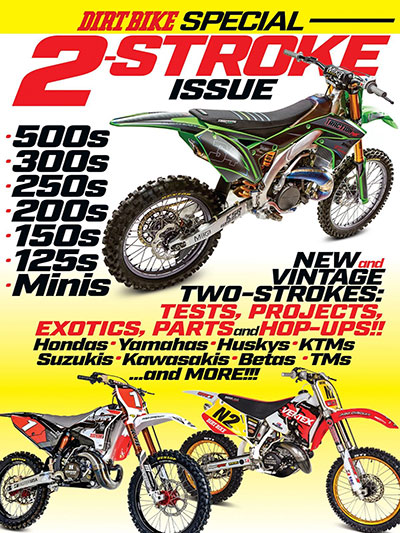 We have assembled a special digital edition of Dirt Bike especially for two-stroke lovers. It has the history of significant models like the Honda CR250, the Yamaha YZ125 and the KTM 300 as well as a current buyer’s guide and a boatload of tests and project bikes. Best of all, it’s free if you sign up for our newsletter. You can get the Two-Stroke Special by clicking here.