THE BELL REPORT: VEGAS TO RENO 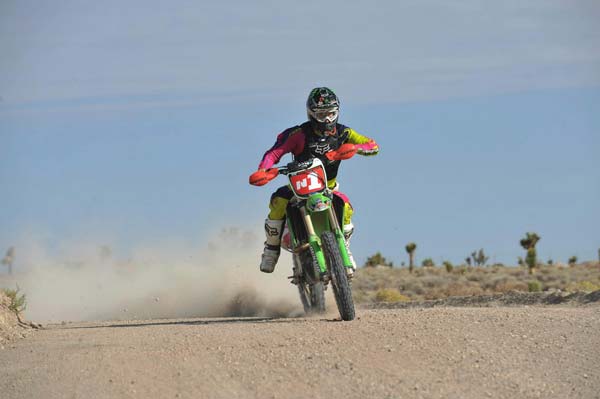 THE BELL REPORT: VEGAS TO RENO

Vegas to Reno has always been a cherished event; touted as the longest off-road race in the United States over some of the most enjoyable terrain in Nevada, this year’s V2R wouldn’t disappoint the three hundred-plus entrants who would leave the line.  Heading to the start there were five teams who looked at like the true players for this year’s win: my teammate, David Pearson, and I would be first off the line, followed by our teammates on the N27, Ty Renshaw and Ricky Brabec.  Third off would be the N6 Honda of Max Eddy and Mark Samuels with the N5 Purvines Kawasaki of Nick Burson and Justin Morrow leaving the line sixth and the Factory KTM entry of Kurt Caselli and Quinn Cody departing seventh, running N10.

David and I were both ecstatic at drawing first start position, as the dust in the first few hundred miles is some of the thickest you could ever experience.  David would start and ride the first ninety-nine miles to pit three and he came in having pulled around half a minute on Ricky, who had an inspired start, and around a minute on the N6 Honda.  The N5 and KTM bike were stuck in the dust and had already lost over nine minutes by the ninety-nine mile mark, a sign of just how bad the dust can be.

I mounted our N1 steed and headed onto the racecourse, planning to ride 120 miles to pit six.  I felt good when I first headed out, considering it sometimes takes me a little while to get warmed up in these longer races, but everything would take a turn (or should I say miss a turn) just after mile 140.  The course was twisting through a sand wash, well marked with ribbon and arrows, and spilled out onto a wide open, graded dirt road.  I continued for about a mile, but I started to realize I hadn’t seen any markings for a bit.  It seemed natural to me that this was the course so I kept going for another mile or so, but soon began to second guess myself, as there wasn’t even a sniff of a ribbon in sight.  I actually turned around twice, but thought better of it and continued in what turned out to be the wrong direction as I had convinced myself this had to be the course.  I made a deal that I would follow the road until it opened up at the base of the mountains and when I got there I was disappointed to find not a trace of a marking.  I finally resigned myself to the fact that I was headed in the wrong direction and turned back to the last place I saw ribbon.  On my way back I came across Mark Samuels, who had followed my track and he turned around and followed me back.  Ty, on the N27, was the smart one of the bunch and ran a GPS tracker with the course map loaded and he was able to find the proper course quickest, taking the physical lead.  I was able to find his track, and the course, maintaining second physical position, with Mark behind me and the N5 Kawi not too far back in fourth.  I came into pit four, around five minutes down to the N27 bike and having ridden about eight extra miles in the section.

After a quick rear wheel change I was back off with the task of reeling Ty in and getting us back into the race; because of the staggered start we would have to catch the N27 bike, pass them and pull out more than a minute to get the win.  Unfortunately my efforts took another hit as within ten miles I had blown another corner and found myself second-guessing where the course was yet again.  And, yet again, here came Mark Samuels who couldn’t resist following me in the wrong direction.  After a couple more miles of back-tracking I was able to find the course again, but the N5 bike was close enough to capitalize and pass me and Mark, relegating me back to third place physically.  I was going absolutely bonkers under my helmet and had visions of what David and the pit crew were thinking, “whose idea was it to put this guy on the team!”  Luckily the Purvines bike had to do some maintenance at pit 5 and I was able to take over second again, but now around nine minutes behind the N27 bike on adjusted time: David and I had our work cut out.

In the final section of my first stint I was able to calm the nerves from getting lost twice and felt a bit more flow to my riding.  Aside from a quick crash in a corner, I had a good ride and was able to pull around three minutes back on Ty, injecting some moral back into the team.  David mounted and took off, set to ride to mile 281, pit 8.

David had a stellar ride and closed to around three minutes adjusted, two physical, and I remounted at pit 8.  This would be a short section for me as I’d sprint to pit 9, just twenty-six miles up the road, but I was able to close the rest of the gap and came into the pit just as the N27 bike was leaving.  A quick wheel change and David was off again to ride 63 miles to pit 11.  He came in to pit 10 with the physical lead, but we needed to do a bit of maintenance and gave to lead back up momentarily.  Within the next section David again closed the gap and was able to pass the N27 bike for the second and final time, giving me around a minute lead at pit 11.

From that moment I was quite focused on the course markings, as we just needed to stay smooth over the final 200 plus miles to seal the victory.  My ride went really well, I truly enjoyed the course and when I pulled into the 14th of 15 pits our, lead had grown to twelve minutes on the dot over the N5 Kawasaki.  In a twist of irony, Ty lost the course and second place in the final miles before pit 14.  David rode the final miles to perfection and we crossed the finish line first by almost thirteen minutes, just under six minutes on adjusted time.

I’m so happy to get this win and I owe a lot to David and the team for keeping us in it when I did my best to throw a wrench into the gears.  The bike was fantastic and the pits were great all day long, big thanks to Monster Energy, THR Motorsports, Precision Concepts, Kawasaki for such a great effort.  Thanks again to Fox Racing, Asterisk, John Burr Cycles, HookIt.com as well as all of the team sponsors for their continued support.  This was a huge win to come back from the problems we had, dominate the way we did and it’s a big shot of confidence with just a few months before the Baja 1000.  Moving forward, I get a couple weeks off and then I’m going to jump back into the Nationals and race the season finale at Lake Elsinore.  Thanks again to everyone who was cheering us on this weekend, look forward to seeing you at the next one!