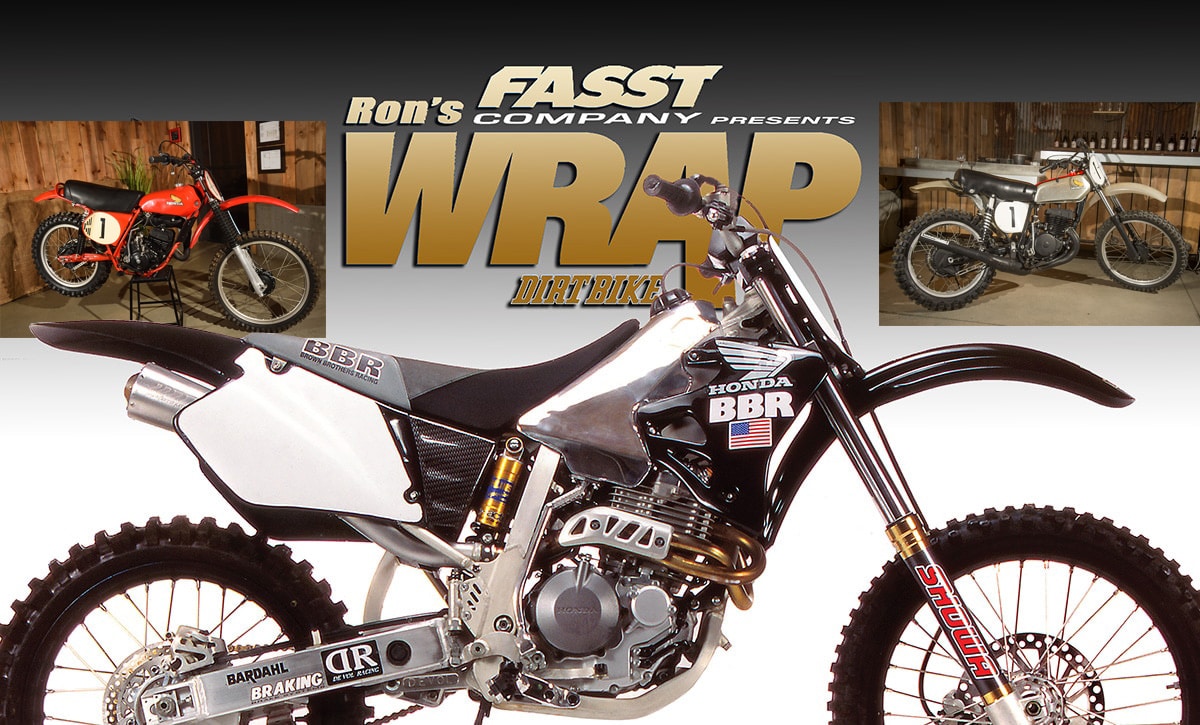 Carson Brown had a great supercross season this year. His dad Duane and I go way back, and we started talking, like old guys do, about the good old days. One of those days was chronicled in the April, 1996 issue of Dirt Bike. The aluminum framed XR400 that BBR built caused quite a stir. Remember, 1996 was before even Honda had developed aluminum frames. It was before the Yamaha YZ400F and before four-strokes were generally considered competitive, especially in motocross. Here are some excerpts from that issue. 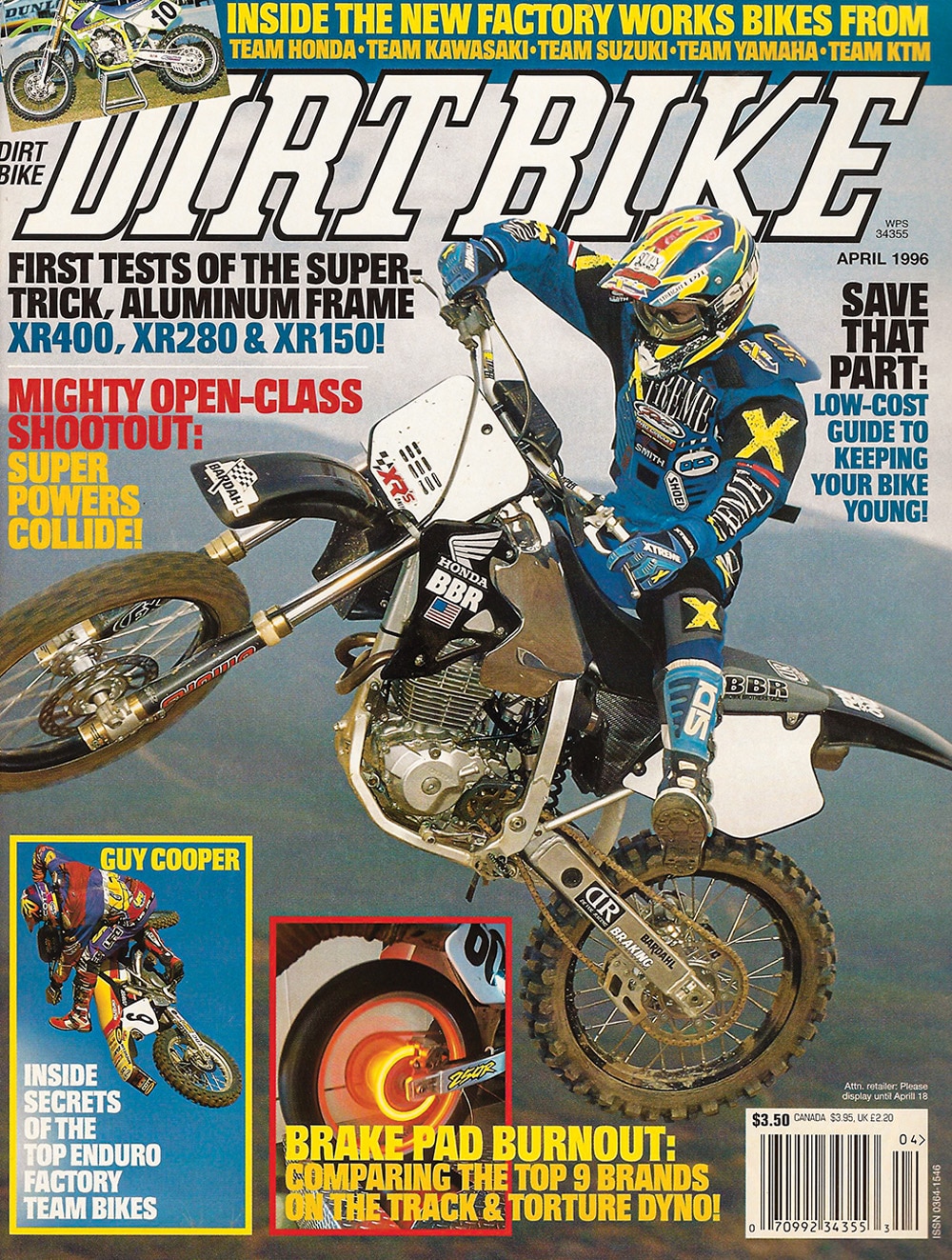 A square-section aluminum frame for Honda’s impressive four-valve 400 would be quite a step forward, even if all it did was mimic the stock geometry, but BBR had loftier goals for its chassis. The plan included bringing current motocross-level chassis strength, geometry, handling and suspension performance to the trail bike engine. To do it, BBR took a ’96 CR250 and measured its every dimension, from steering head angle to footpeg position, and engineered the aluminum frame to hold the XR engine without disturbing the CR chassis configuration. When the Browns finished with the main frame, they were able to bolt the ’96 CR’s swingarm and linkage in place. The production swingarm was used, but BBR used Devol CR billet linkage parts. A Devol-valved Ohlins shock is used instead of the CR’s Showa.
The XR’ s fork lacked the travel to match the CR250’s rear suspension, so a ’96 Suzuki RM conventional, twin-chamber fork was slid into the billet triple clamps. BBR’s CR-copy aluminum subframe went on as well, allowing the standard Honda CR fuel tank and bodywork to be used. The special frame and chassis deserved something more striking and sophisticated than stock CR bodywork, so BBR fabricated a CR250 fuel tank in aluminum and chose black for the rest of the body parts. 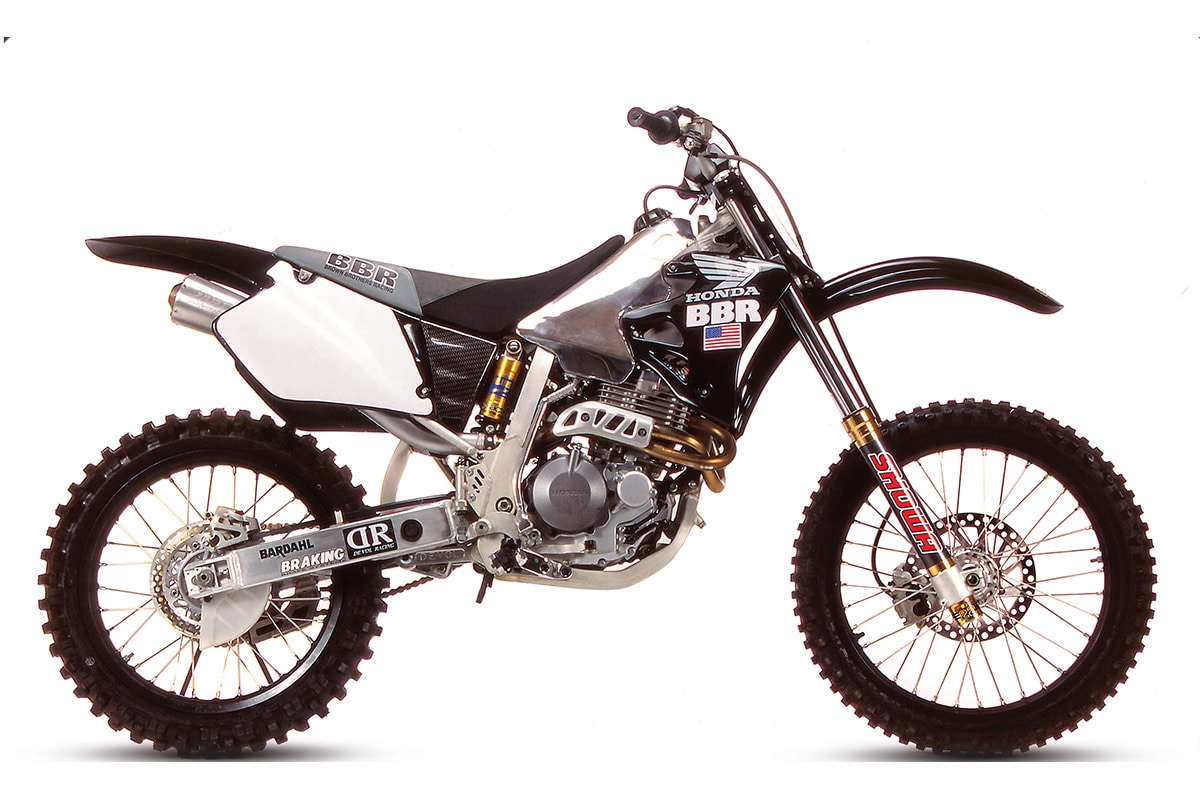 BBR wanted to see what the stock XR400 engine could do in the CR-Ievel frame, so modifications were limited to a handmade pipe and appropriate carburetor jetting. We were curious as well and joined the BBR crew for the bike’s first outing. Our first laps on the 400 were a little confusing, but in a good way. Imagine feeling what is essentially a CR250R beneath you: slim, quick-steering and solid, with broad, pleasant yet unintimidating power at the business end of the throttle. The BBR XR400 is a mere three pounds lighter than the stocker, but its rigidity eliminates the kind of flex that dulls a bike’s handling. If BBR had hung the XR’s comparatively wimpy swingarm, front end and light-duty wheels on its aluminum main frame, the bike could have come out much lighter but would have the same modest handling limits the XR has.
BBR’s XR400 is truly ready for motocross. There is no over-the-counter bike that delivers quite the same sensations. Two- and four-stroke motocrossers are far more intimidating, and even the best trail bikes are plump and oafish by comparison. BBR’s 400 generates that rare, reassuring feel of a machine with a chassis that is more than a match for its engine. 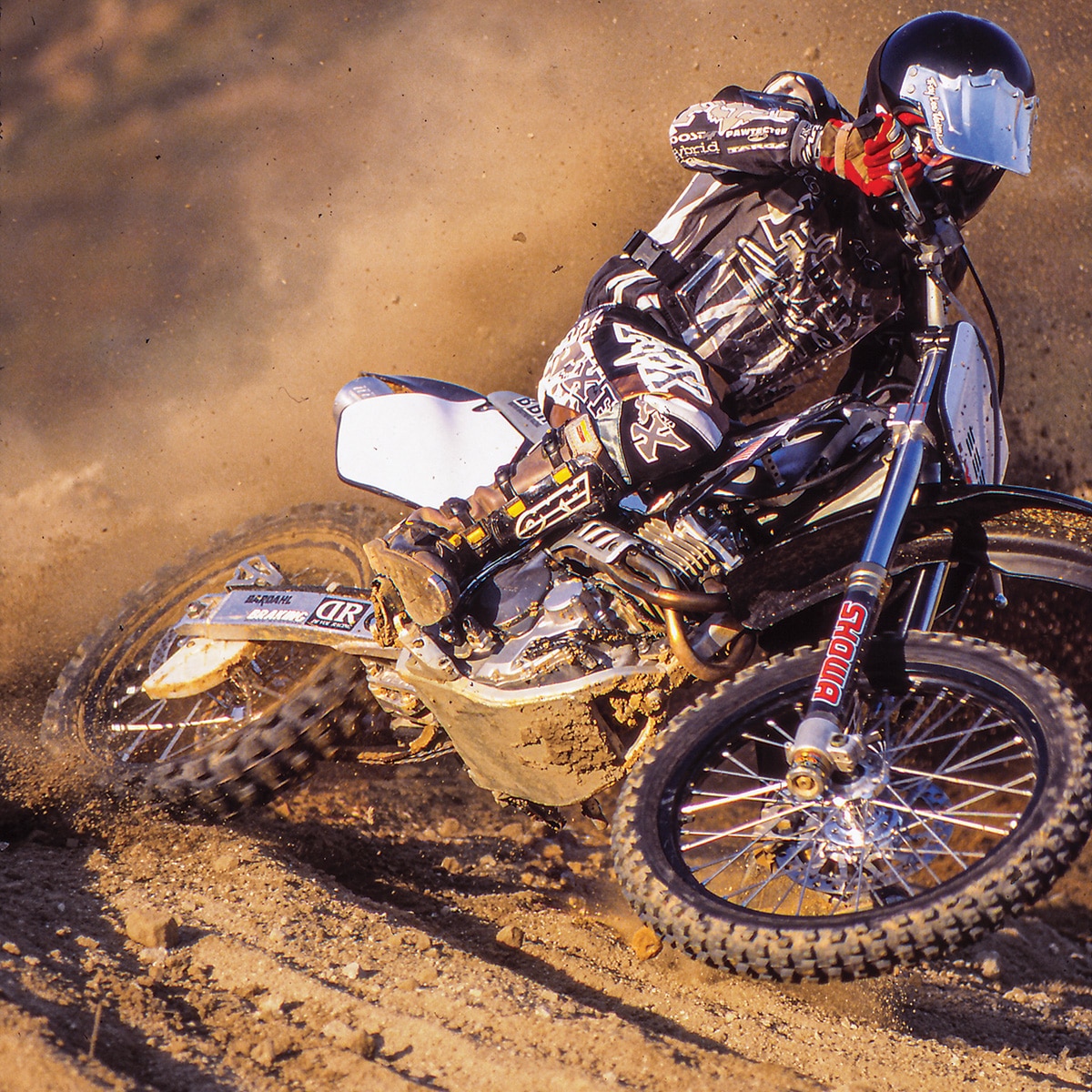 Whatever happened to that bike? It turned up again just recently. BBR sold the prototype to an older rider and, for a 26 year-old bike, it has relatively low time. Duane purchased it and it’s currently in the process of a full restoration. We can’t wait to ride it again.

On the eve of the 2022 Lucas Oil Pro Motocross opening round at Fox Raceway, Honda celebrated 50 year’s of involvement in U.S. motocross. A special event was held at the Peltzer Winery in Temecula, California, which isn’t far for the Pala Indian Reservation where the national championship season would start. Honda’s U.S. legacy started at the beginning of the 1973 season when the president of Honda invited reigning 250 Champion Gary Jones and his father/manager Don to his hotel suite and opened a suitcase filled with cash. That’s how signing bonuses were done in those days. The result was the 1973 championship–Gary’s third and Honda’s first.

The 2023 line of motocross bike from Honda was revealed, including a special 50th anniversary edition. You can read about the new Honda line up here.